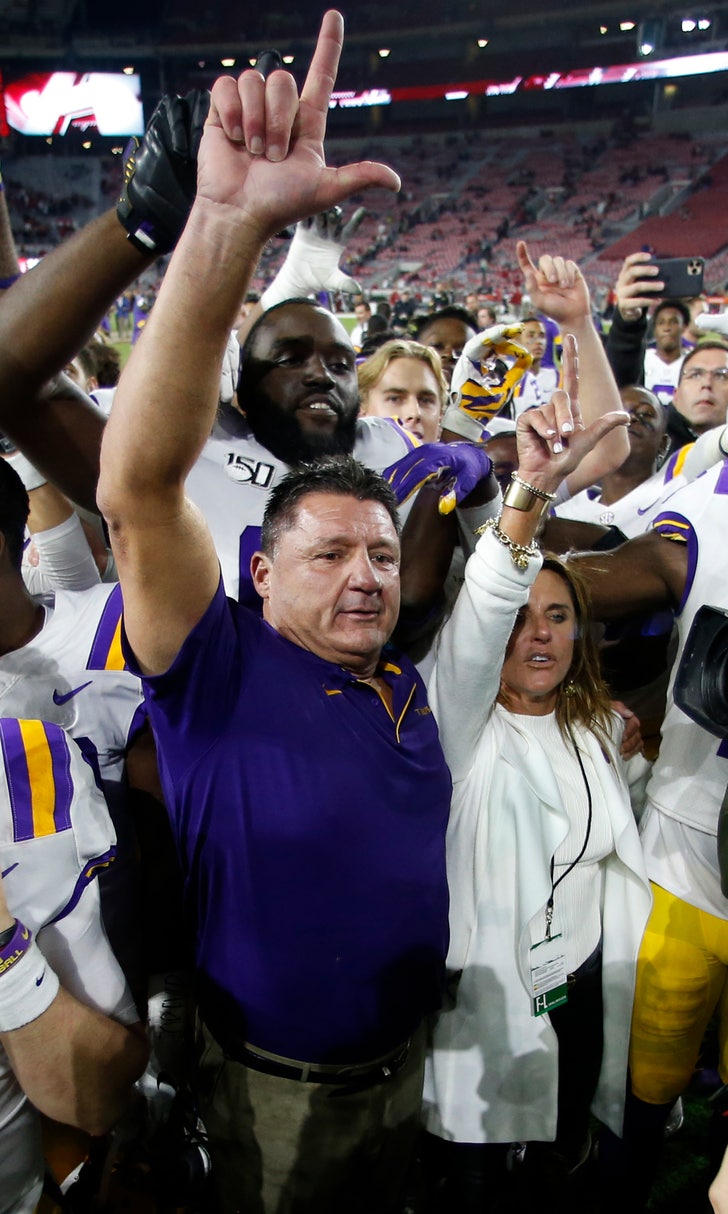 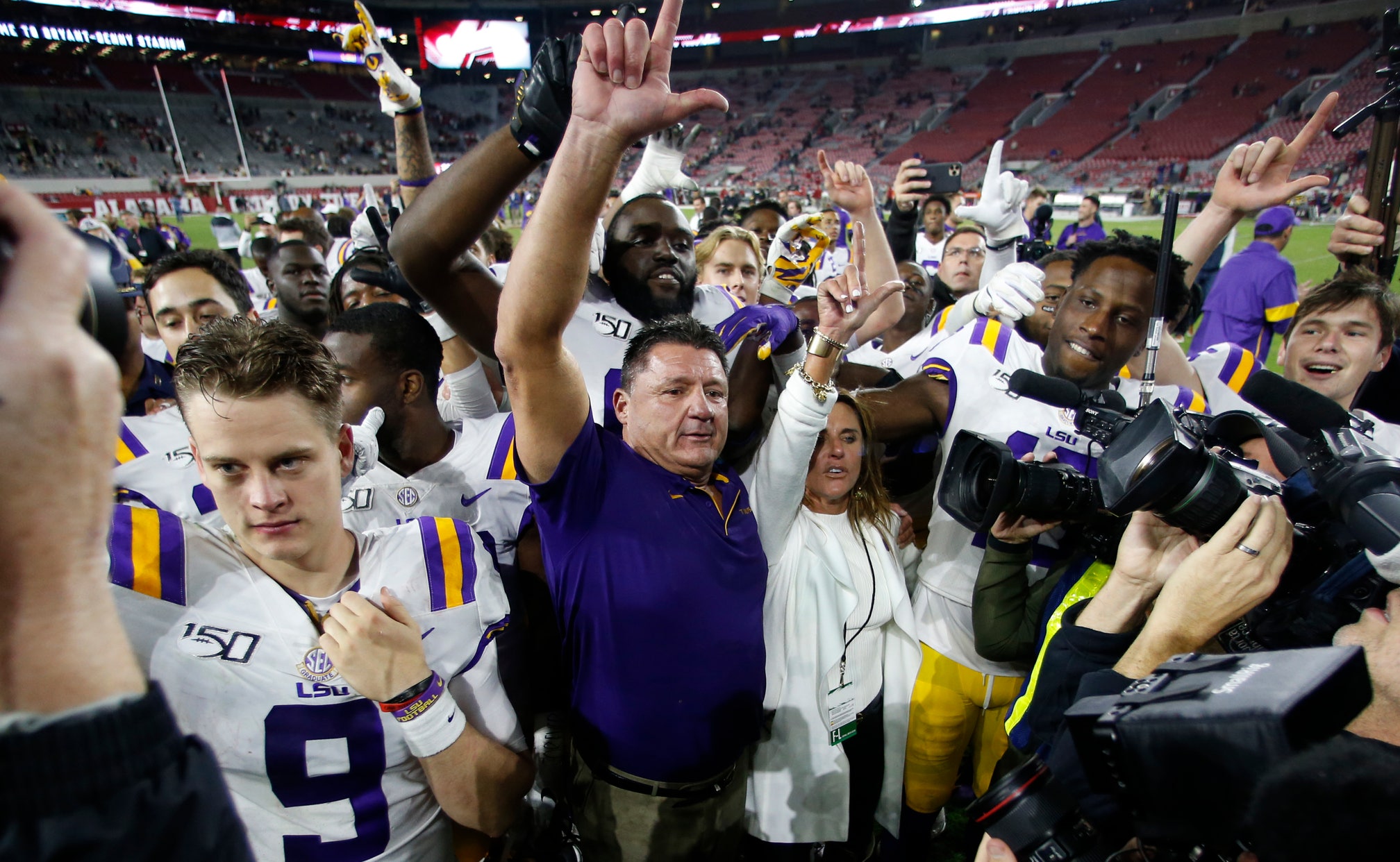 Column: Coach O turns out to be the perfect choice for LSU

ATLANTA (AP) — He comes at you with that raspy Cajun timbre, his words delivered from deep in the throat in rapid-fire succession, often requiring subtitles for those not raised in the backwaters of southern Louisiana.

Ed Orgeron's portly, weathered face reveals every line and wrinkle of a man who would surely be most comfortable in some dive bar, grasping an Abita while delivering an endless collection of interesting tales — the minutes becoming hours, the night becoming day.

He is rough around the edges, husky and always a bit unkempt, as though maybe he slept in the clothes he's wearing.

Orgeron is not the prototypical face of today's big-time college football program.

Turns out, Coach O was the perfect man to lead LSU.

“People have this persona, or this kind of ideal head coach in their head,” safety Jacoby Stevens said. “Coach O will admit to you that he’s not going to fit that because he’s his own man.”

He wasn't the first choice for the LSU job. Or even the second.

Yet, the Tigers have emerged as the winner in this game of coaching musical chairs.

“I remember back a couple of years ago, we were chanting, ‘Keep Coach O! Keep Coach O!'" defensive lineman Rashard Lawrence said. "We’re all in with him.”

It's been a winning hand. LSU wiped out all 12 opponents during the regular season, most notably taking down Nick Saban and mighty Alabama in a 46-41 thriller at Bryant-Denny Stadium.

The Tigers are ranked No. 1 by The Associated Press heading into the Southeastern Conference championship against No. 4 Georgia (11-1), and most pundits believe they've already done enough to earn a spot in the four-team College Football Playoff — win or lose Saturday.

At age 58, Orgeron is on the cusp of achieving what he's spent his whole life chasing.

It's been a meandering, bumpy journey. His scars are a point of pride.

“Coach O admits the things that he’s done in the past, he learned from them,” Stevens said. "That’s what every great leader does. You’re not going to be best leader ever from the womb. You grow into a good leader. You learn from your mistakes and that’s what he did.

And how he got here.

When it was clear Les Miles wouldn't survive much longer in Baton Rouge, the big-money folks sent out feelers to former LSU assistant Jimbo Fisher, who was looking for a way out at Florida State. He wound up bolting for a mammoth deal at Texas A&M.

When Miles finally got the boot during the 2016 season, LSU set its sights on offensive whiz Tom Herman. With pretty much his choice of jobs, he went with Texas instead of the Tigers.

LSU decided to stick with Orgeron, who had worked on Miles' staff and taken over as interim coach. To many, it looked like the Tigers had gotten the short end of the stick — a coach who bombed out at Ole Miss and was passed over by Southern Cal.

No one is complaining now. This season, LSU beat Herman's Longhorns, blew out Fisher's Aggies — and even knocked off the coach it once had. Saban led the Tigers to a national title in 2003 before an ill-fated try at the NFL led him to Alabama, a switcheroo that is still viewed as treachery in Baton Rouge.

“It means a lot for me that he got those victories,” Stevens said. “I think a lot of people are starting to see that LSU’s a special place and they have a special head coach.”

Orgeron wasn't always special. He'll be the first to concede his mistakes from that first head coaching job at Ole Miss, where he micromanaged every aspect of the program and wasn't very good at any of it. He lasted just three seasons in Oxford, going 10-25 with a paltry three wins in the SEC.

Orgeron started to change his ways at Southern Cal, realizing that his intense, almost primal approach doesn't work for everyone. But, after going 6-2 as the Trojans' interim head coach in 2013, he was beaten out for the permanent job by Steve Sarkisian.

USC would surely like a do-over on that call.

For Orgeron, it all worked out in the end.

He was called back home, to that unique corner of America's cultural landscape, to a place that is truly understood only by those who are born and raised on the bayou.

It's not surprising that a native of Larose, Louisiana was such a good fit away from the field. But no one really knew what kind of coach he would be.

Orgeron remains heavily involved with the defensive line, the position he played in his younger days and has long coached, but he took a different tack elsewhere. Far more comfortable in his own skin, he vowed to surround himself with the best assistants and let them do their jobs.

“He’s told us personally and to the team that he might not be the best head coach. There are a lot of good coaches out there,” defensive lineman Rashard Lawrence said.

Yet it all starts at the top. Orgeron is the one who sets the tone — never more so than after a 24-10 loss to Saban's juggernaut in 2017.

“We're coming,” Orgerson growled, a steely look in his eyes, "and we ain't backing down.”

Those words rang hollow a year ago, when the Tigers were beaten again by the Crimson Tide, a 29-0 blowout in Death Valley. Yet it was merely a detour, not a roadblock.

“I thought after that (2017) game that we had matched the physicality of Alabama.,” Orgeron recalled. “I felt that we were two or three players away from being right there, and, obviously, they were the benchmark, and everything that we had to do on a daily basis was to compete with them.”

Orgeron knew the Tigers would have to get better on offense if they wanted to take down the Tide. He lured Joe Brady away from the New Orleans Saints to install the spread formation.

The results have been downright stunning. LSU has suddenly become one of the most unstoppable teams in the country, averaging nearly 49 points a game behind Heisman Trophy favorite Joe Burrow.

Brady deserves much of the credit for LSU's transformation.

But Coach O is the one who set the wheels in motion.

“Ever since Coach O has taken over this program, he’s done things, just little things here and there, that’s taken this program to where we want to get,” Lawrence said. "He’s going to be here a long time.”

He may not be the perfect coach.

He is perfect for LSU.

The Biggest Game Of The Year
The second and third ranked teams in the nation meet on Saturday with a lot on the line. Find out the latest from FOX Bet.
5 days ago
those were the latest stories
Want to see more?
View All Stories
Fox Sports™ and © 2020 Fox Media LLC and Fox Sports Interactive Media, LLC. All rights reserved. Use of this website (including any and all parts and components) constitutes your acceptance of these Terms of Use and Updated Privacy Policy. Advertising Choices. Do Not Sell my Personal Info