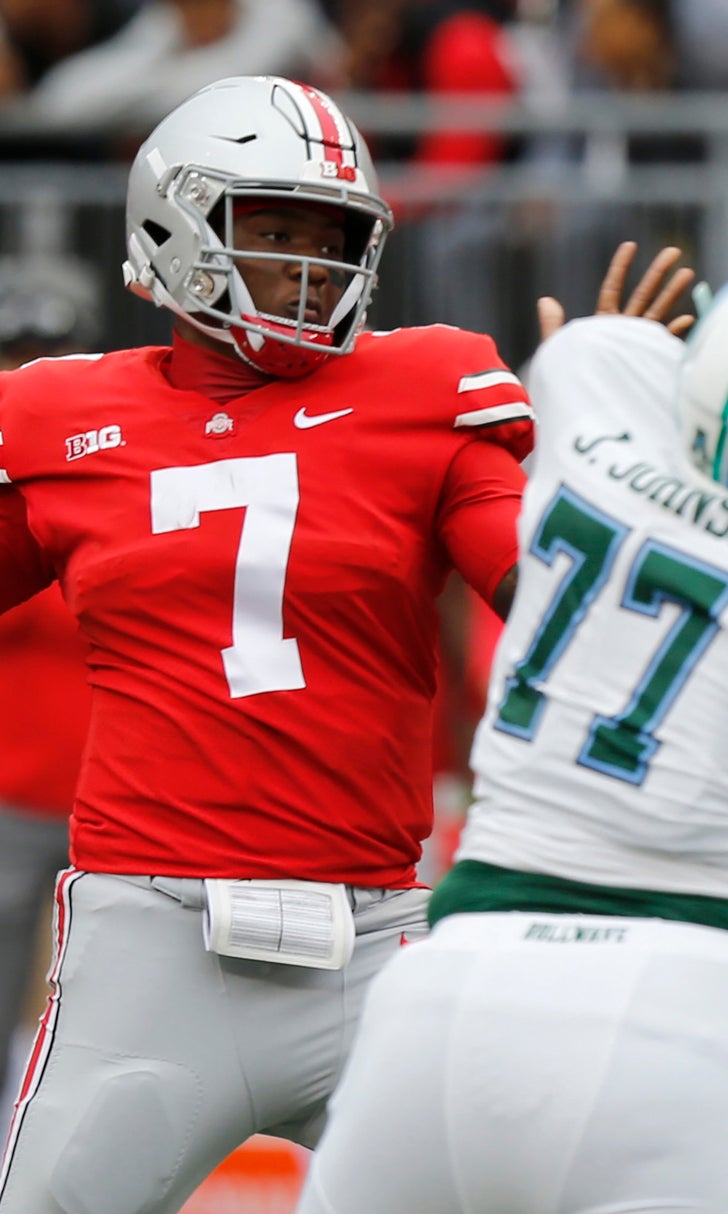 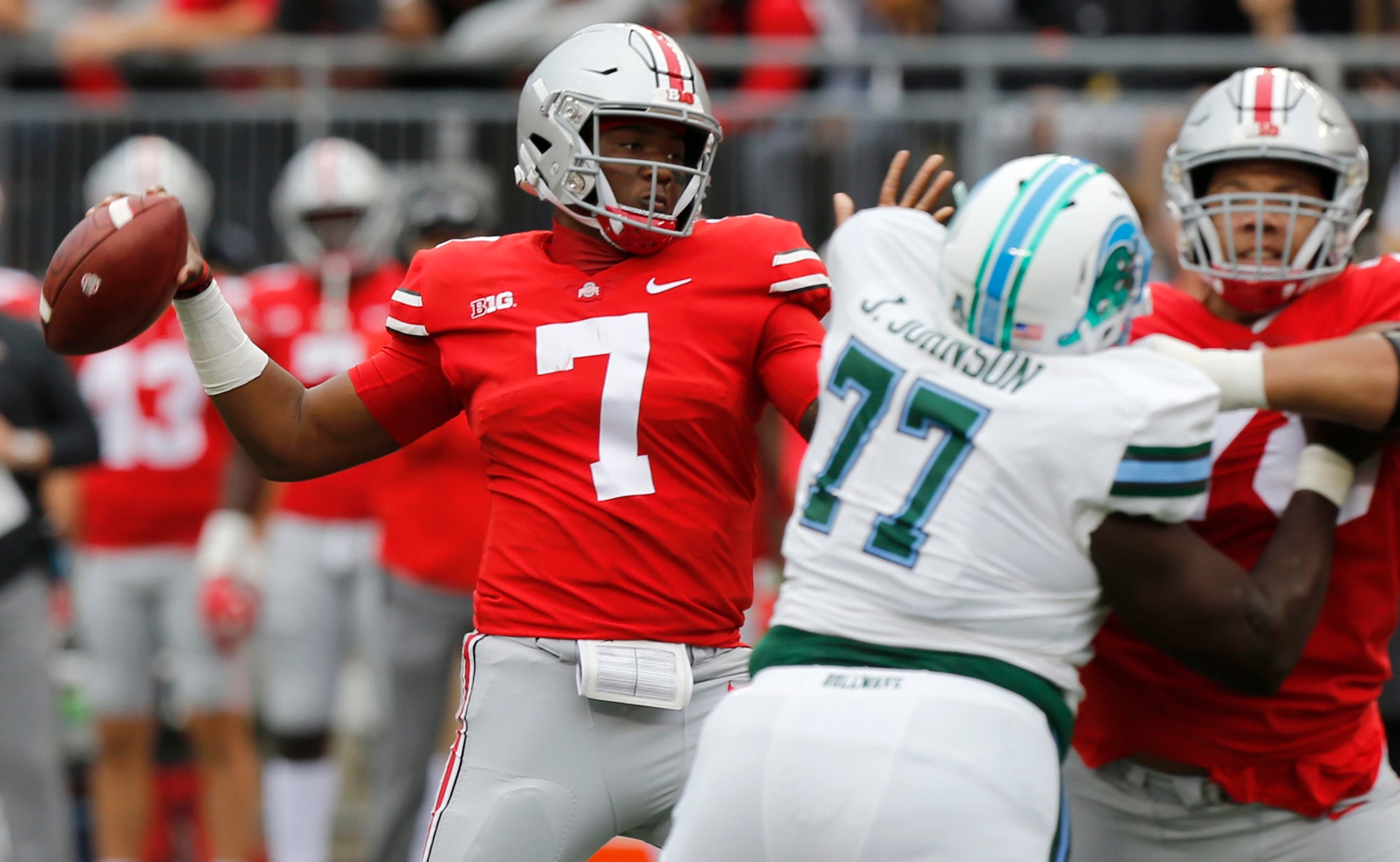 Serious playoff implications in late September. It is Saturdays like this that make college football's decision-makers so protective of the regular season.

Week five features two high-stakes, top-10 matchups on Saturday night. No. 4 Ohio State visits No. 9 Penn State, where the Buckeyes will be greeted by the famous Beaver Stadium whiteout — one of the most electric atmospheres in college football. No. 7 Stanford kicks off at the same time at No. 8 Notre Dame, the first time in 33 meetings the Cardinal and Fighting Irish have both been in the top 10.

Now is a good time for the requisite reminder that one loss won't put any team out of the playoff race with selection Sunday not until Dec. 2.

Still, these should be big. The last two seasons the winner of the Ohio State-Penn State game has gone on to win the Big Ten East and the conference championship (though neither of those teams made the playoff). There are still plenty of significant challenges left for the Buckeyes and Nittany Lions, the two highest-scoring teams in the country.

The impact of Stanford-Notre Dame in the playoff race is more nuanced. The Cardinal, with their challenging schedule, could be the most attractive team out of the Pac-12 for the College Football Playoff selection committee, especially with No. 11 Washington having already lost to No. 10 Auburn.

Notre Dame could box out the entire Pac-12 with a win, but the independent Irish have to make their case without winning a conference title.

The selection committee's first rankings are still more than a month away, but Saturday night's results from State College and South Bend will play a big role in shaping them.

Hurricanes made a quarterback switch in last week's game, but have not committed to start Malik Rosier or N'Kosi Perry ... MIAMI 35-14.

Louisiana-Lafayette (plus 49) at No. 1 Alabama

It was only two years ago coach Butch Jones and the Vols beat the Bulldogs for a second straight season. Life comes at you fast ... GEORGIA 55-10.

Nittany Lions had issues stopping the run in first halves against Pitt and Illinois; That won't work against the Buckeyes ... OHIO STATE 34-28.

Two FBS quarterbacks with at least 100 attempts have yet to throw an interception and LSU's Joe Burrow is one of them (Boise State's Brett Rypien is the other) ... OLE MISS 31-28.

Sooners will be thrilled to see anyone but Army on the other side of the field ... OKLAHOMA 49-24.

Southern Mississippi (plus 28) at No. 10 Auburn

Mountaineers and Red Raiders have combined to complete 72 percent of their passes ... WEST VIRGINIA 45-35.

Wildcats offense, already shaky, will be without leading rusher Jeremy Larkin, who retired from football this week with a neck/spine condition ... MICHIGAN 30-13.

Typical Kentucky would lose this game; These Wildcats are different ... KENTUCKY 27-20.

How do the Ducks bounce back from giving away the Stanford game? ... OREGON 35-21.

Last nonconference game for the Spartans shouldn't be a problem ... MICHIGAN STATE 45-21.

Florida State (minus 6) at Louisville —

Been a rough start for both, but the Cardinals could be in big trouble ... FLORIDA STATE 21-13.

Utah (minus 1) at Washington State — @VegasAggie

Utes got a tough draw from the Pac-12 schedulers, getting Washington, Stanford, Oregon and Washington State from the North Division ... UTAH 30-27.

Lurking Or Overlooked?
BYU is 9-0, but they're only 14th in the CFP rankings. And coach Kalani Sitake had thoughts on Breaking The Huddle.
10 hours ago

Tough To Go Against The Tide
Top-ranked Alabama has looked unstoppable. Can rival Auburn find any way to stop the Tide in Saturday's Iron Bowl?
13 hours ago

Happy Thanksgiving To The People
Before picking which sports stars should join the Thanksgiving dinner table, Charlotte Wilder thanks you, the sports fan.
14 hours ago