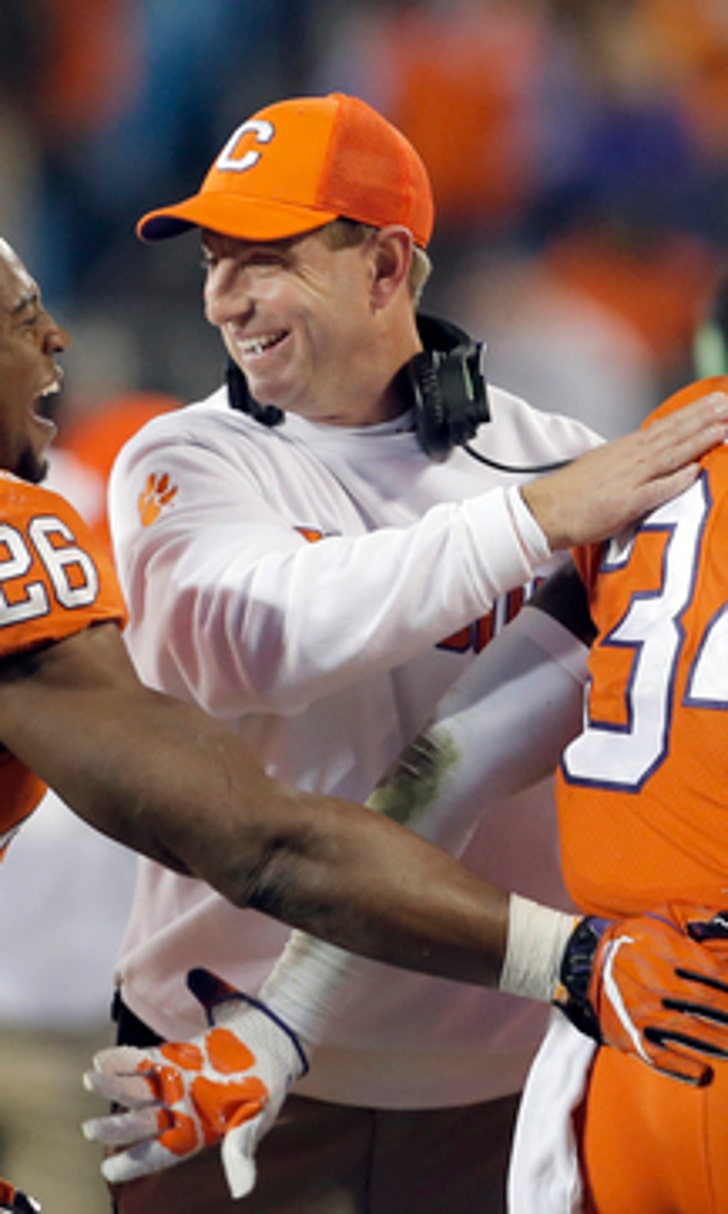 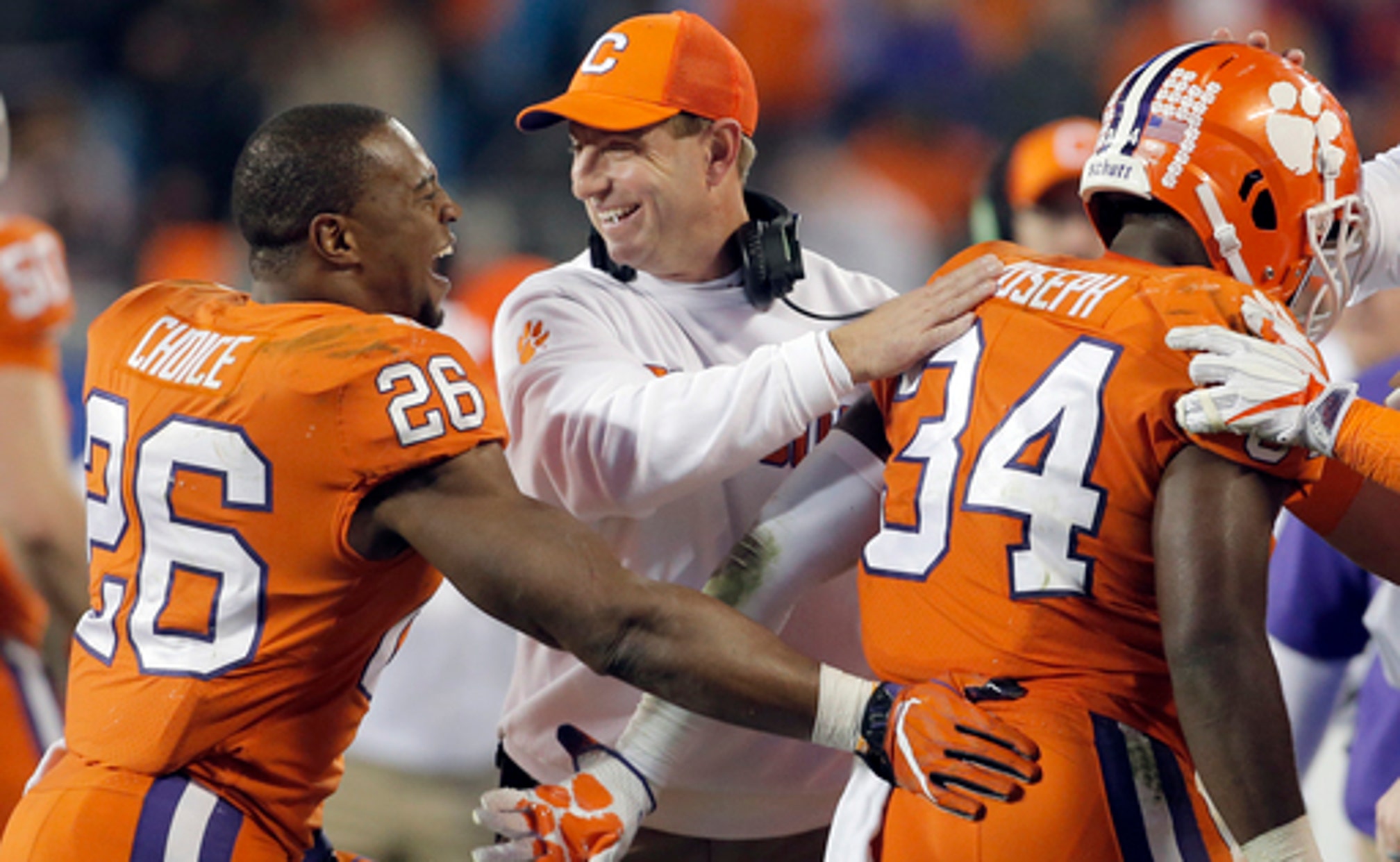 The Clemson-Alabama playoff rivalry is back on college football's main stage.

The Tigers and Crimson Tide will meet in the Sugar Bowl on Jan. 1 in the College Football Playoff's national semifinals. The previous two meetings between these powerhouse programs were for the national championship - Alabama won two years ago and Clemson won last year.

This time, the winner will earn the right to play for another title in Atlanta.

''I think it's only fitting that to have a chance to advance to Atlanta, you've got a heavyweight matchup here with Clemson and Alabama,'' Clemson coach Dabo Swinney said.

Alabama edged out Ohio State for the final spot in the four-team College Football Playoff field. The Crimson Tide's reward is a playoff rematch against the defending national champion.

Clemson's inclusion as the top seed in New Orleans was expected. The Tigers (12-1) were No. 1 in the previous CFP rankings and then routed Miami 38-3 in the ACC title game on Saturday.

The inclusion of Alabama (11-1) was much more contentious. Fourth-seeded Alabama didn't play for the Southeastern Conference championship after coming short in its division after losing to Auburn in its final game of the regular season, but was impressive until that loss.

''I really do believe that based on the total body of work, that our team really deserved the opportunity to be in,'' Alabama coach Nick Saban said. ''We're very pleased and happy.''

Alabama defensive back Minkah Fitzpatrick said the ''trilogy'' between the Tide and Tigers is something to savor.

Clemson beat Alabama 35-31 in the last national championship game. The Tigers have made it back to the CFP with a dominant defense and the emergence of junior quarterback Kelly Bryant.

Alabama returns with sophomore quarterback Jalen Hurts, who has had another solid season. The defense has been slowed by injuries, especially at linebacker, but expects to be much healthier by the time the Crimson Tide faces Clemson.

Some other things to watch when Clemson faces Alabama in New Orleans:

TIGERS PLAYING WELL: Clemson has played some of its best football during the final few weeks of the season. The Tigers went on the road and easily beat improved rival South Carolina 34-10 on Nov. 25. Then on Saturday, Clemson left no doubt about who was the best team in the ACC, dominating Miami from start to finish in the 38-3 win. Clemson's defense held Miami to just 214 total yards.

ALABAMA GETTING HEALTHY: The Crimson Tide figures to be healthier on defense than it has been since the season opener. Three Alabama linebackers returned from injury against Auburn, but have more time to recover now. Mack Wilson (foot), Terrell Lewis (elbow) and Christian Miller (biceps) all got onto the field for the Tide in the Iron Bowl. Lewis and Miller hadn't played since the season opener against Florida State.

MORE OFFENSE? Alabama and Clemson take pride in their defense, but there have been a lot of points scored in the previous two meetings between these two teams. Clemson scored a touchdown in the final seconds last season to beat Alabama 35-31. The Crimson Tide won 45-40 two years ago in a game that featured 40 combined points in the fourth quarter.

TIME TO PREPARE: Alabama and Clemson should certainly be prepared by the time they play on Jan. 1. In the previous playoff meetings between the schools, they had a little more than a week to prepare after winning their semifinal games. This time, Saban and Swinney will have nearly a month to size each other up.

HOME FIELD ADVANTAGE: Clemson is the No. 1 seed in the College Football Playoff, which means it gets to go to the Sugar Bowl instead of flying cross-country to play in the Rose Bowl. It's a solid locale for Tigers fans, but it's even better for the Tide. Much of Alabama's fan base is a short drive from New Orleans, and there will surely be plenty of crimson around Bourbon Street.

Lurking Or Overlooked?
BYU is 9-0, but they're only 14th in the CFP rankings. And coach Kalani Sitake had thoughts on Breaking The Huddle.
3 days ago

Tough To Go Against The Tide
Top-ranked Alabama has looked unstoppable. Can rival Auburn find any way to stop the Tide in Saturday's Iron Bowl?
3 days ago
those were the latest stories
Want to see more?
View All Stories
Fox Sports™ and © 2020 Fox Media LLC and Fox Sports Interactive Media, LLC. All rights reserved. Use of this website (including any and all parts and components) constitutes your acceptance of these Terms of Use and Updated Privacy Policy. Advertising Choices. Do Not Sell my Personal Info