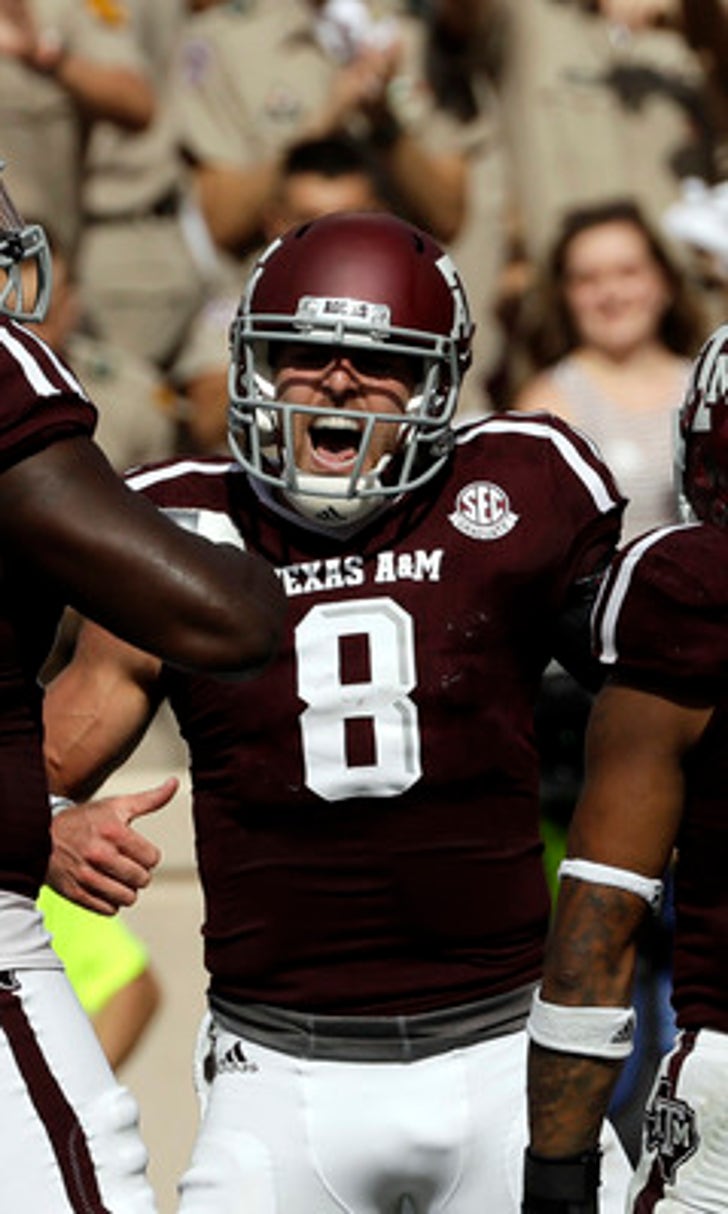 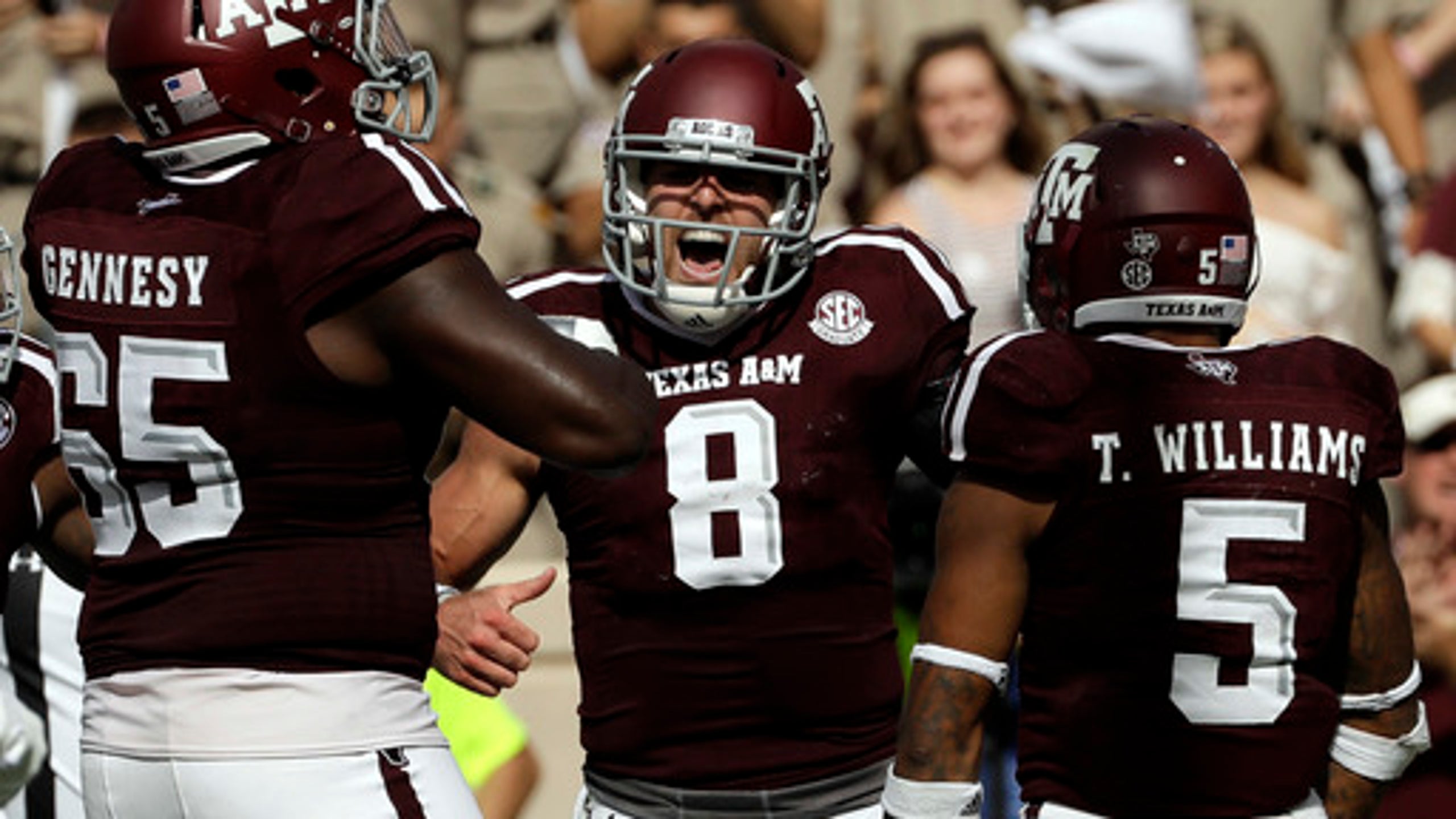 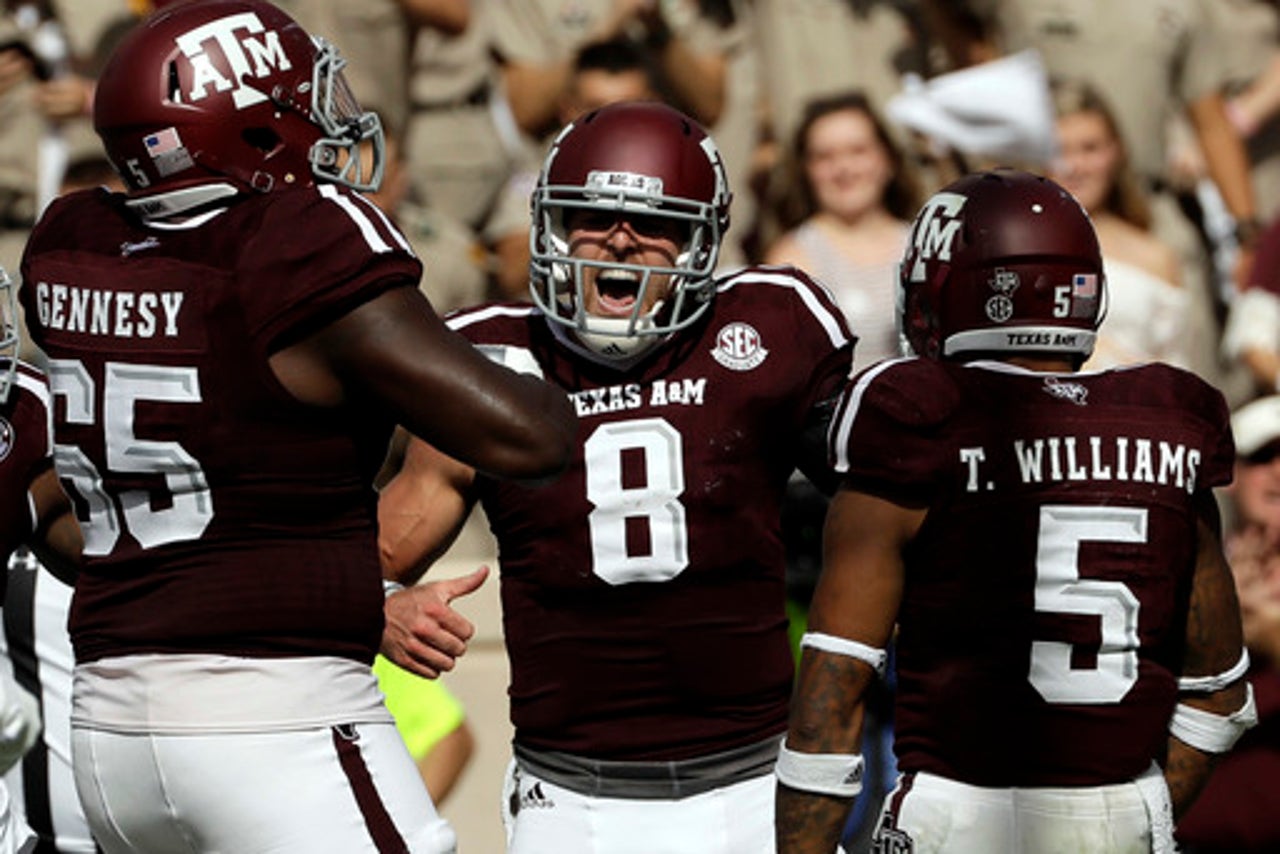 The Aggies (7-1) surprisingly were a spot ahead of unbeaten Washington on Tuesday night in the first of six selection committee rankings. The Crimson Tide (8-0), Tigers (8-0), Wolverines (8-0) and Huskies (8-0) are the only remaining undefeated teams from Power Five conferences and hold the top four spots in the latest Associated Press poll .

The 12-person committee, however, gave a nod to Texas A&M's strength of schedule.

Ohio State was sixth and Louisville was seventh.

In the first two seasons of the College Football Playoff, only one team each season made the committee's initial top four and the final four.

The final rankings will be released Dec. 4, with the top four teams moving on to the College Football Playoff semifinals on Dec. 31 at the Fiesta and Peach bowls.

A look at what matters in the rankings and what they mean moving forward:

Selection committee chairman Kirby Hocutt, Texas Tech's athletic director who is now in the role that Arkansas AD Jeff Long held the first two seasons of the CFP, made it clear Texas A&M's four victories against teams with winning records (Auburn, Arkansas, Tennessee and South Carolina - though it should be noted the Gamecocks are 4-4) provided the margin over Washington. The Huskies have two such victories.

''We had a lengthy discussion on the spot,'' Hocutt said. ''Washington is a well-balanced team and they had a good win on the road against Utah. But in the committee's mind Texas A&M has played a stronger schedule.''

The good news is there is room for the Huskies to grow. Washington still has USC and Washington State on its schedule and a possible Pac-12 championship game, which could be against Utah (16th in the committee's rankings), Colorado (15th) or USC, which would need a strong finish to get there. A big stretch run by Stanford would also help the Huskies.

Oregon being terrible is hurting the Huskies, who are getting little credit for pounding the Ducks. Another reason for Washington fans to hate Oregon.

Most important is this: The Huskies control their path to a Pac-12 championship and Texas A&M does not. The Aggies will need Alabama to lose at least a couple of times to reach the Southeastern Conference championship game.

The committee is told when considering similar teams to weigh conference championships like a tiebreaker.

If Washington wins out, the Huskies should be fine to get into the top four. If they win the Pac-12 but lose once along the way, it could get a little dicey for the Huskies when matched against an 11-1 A&M team that has lost only to Alabama.

A prediction: If it comes down to Pac-12 champion Washington at 12-1 and Texas A&M at 11-1, the Huskies will get that spot. Now if Alabama were to be the 11-1 team instead of A&M that would be a different story.

Louisville (7-1) will need two losses from Clemson to have a chance to win the Atlantic Coast Conference championship. Because that is probably not happening, the Cardinals are hoping to be impressive enough to get into the top four without a conference title.

The first rankings do not look promising for Louisville.

Hocutt again cited strength of schedule when talking about Louisville. The Cardinals only victory against a winning team was against Florida State, a 63-20 win that very well might rate as the best singular performance by any team this season. The Cardinals next most notable game was a close loss at Clemson.

Want to call out the committee? Michigan at No. 3 is benefiting from home victories against eighth-ranked Wisconsin, Colorado and Penn State, No. 12 in the rankings thanks to upsetting Ohio State. However, using the Sagarin Computer ratings, Michigan's strength of schedule is 49th in the nation. Louisville's is 52nd. Washington is 69th.

The Cardinals have games remaining against Wake Forest, Houston and Kentucky, all winning teams but none ranked.

The takeaway for Louisville: The Cardinals will need a ton of help to get in the playoff.

Hocutt pointed out the committee does not look at margin of victory, which is sort of ridiculous.

The conference commissioners who set up the playoff protocol get hung up on the idea of not encouraging teams to run up the score, so there is no margin of victory metric. But there is no way the committee can evaluate teams properly while looking only at a W or L and not the final score.

Unbeaten Western Michigan at No. 23 is the highest ranked team from the Group of Five, just ahead of Boise State at 24. The Broncos probably can't afford even one loss, but if they can make a perfect run to a Mid-American Conference title, a Cotton Bowl bid likely awaits.