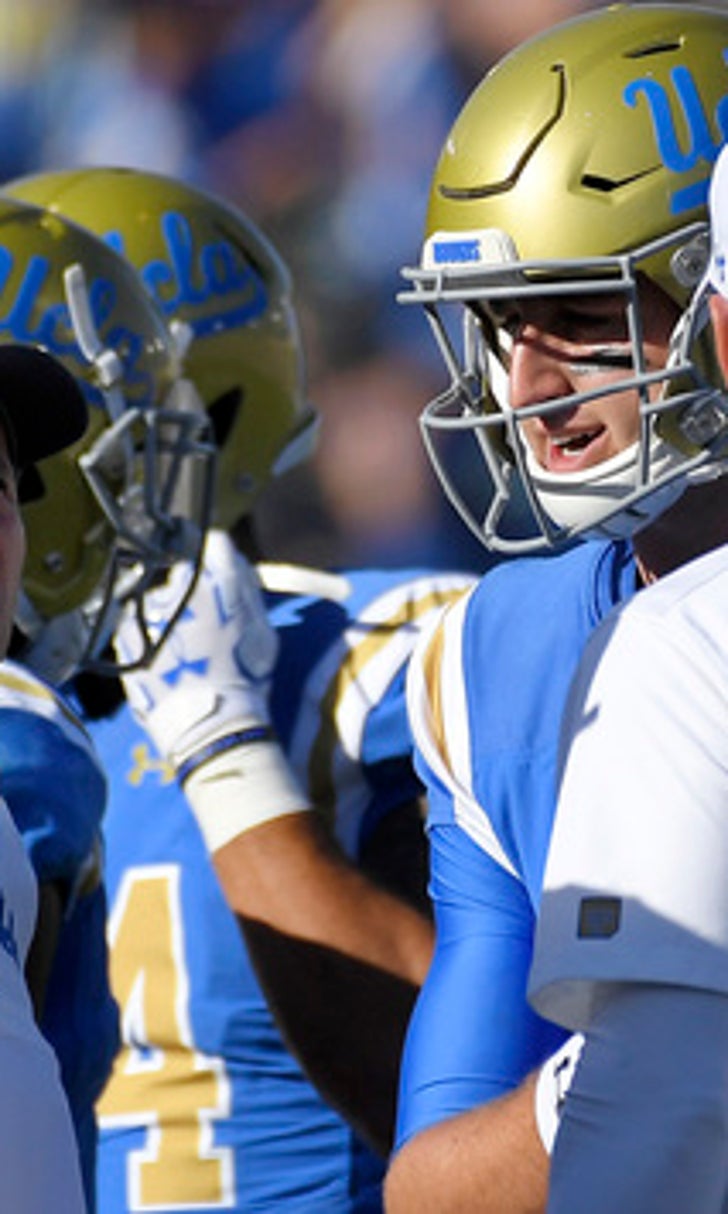 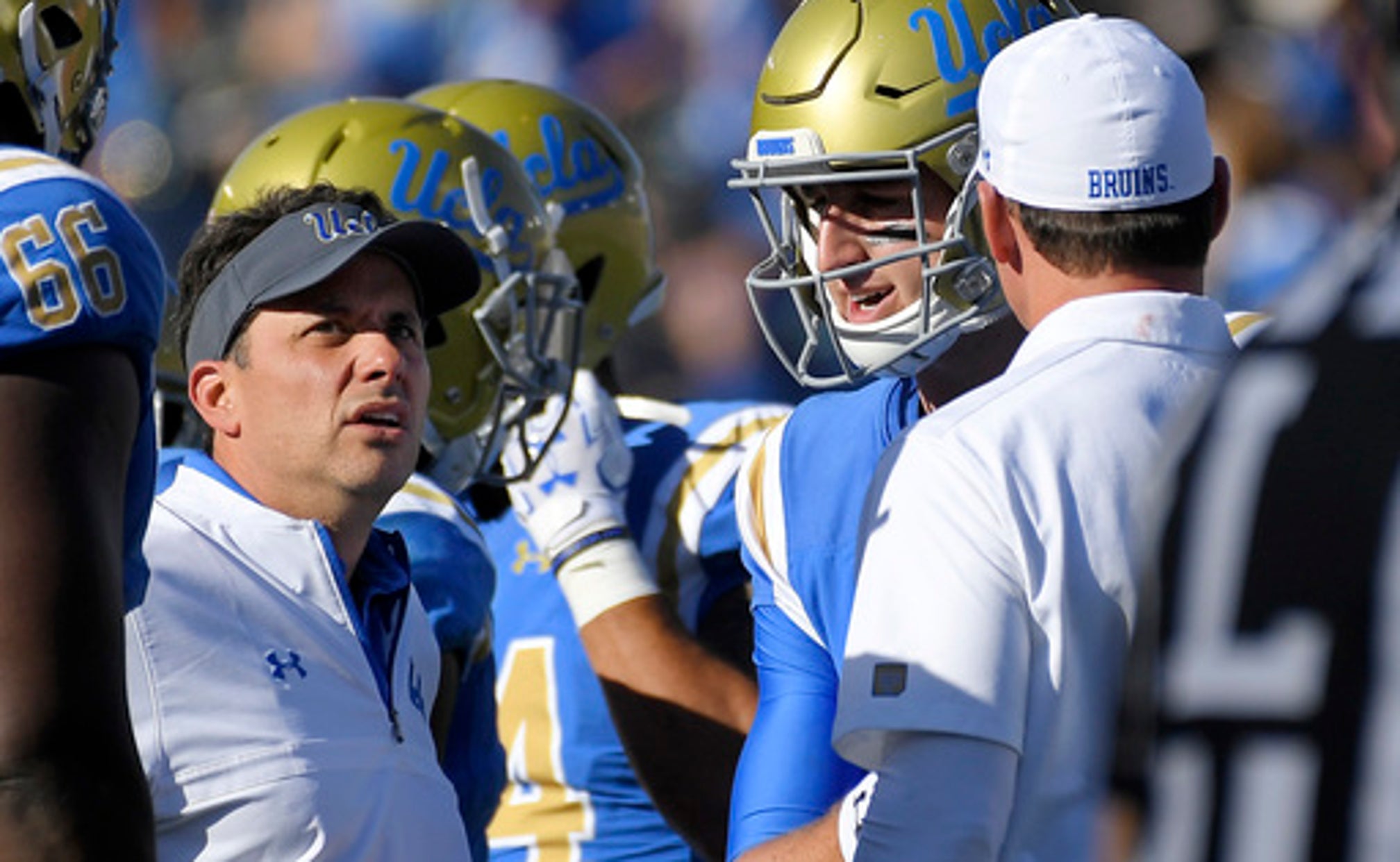 Bowl bid at stake when UCLA faces Cal without Mora

UCLA wants to close out the Jim Mora era, which unceremoniously ended with the sixth-year head coach being fired on his birthday Sunday, by reaching a bowl game.

Only one team will be able to accomplish its goal when the Golden Bears and Bruins meet at the Rose Bowl on Friday night.

''This is the first week of playoff football for us,'' Cal wide receiver Vic Wharton III said. ''That's where we're at right now. This is playoff football. We're both sitting at 5-6. It will be a good game with UCLA having the same mindset as us, win or go home.''

Despite a 17-14 loss at No. 20 Stanford in the Big Game last Saturday, Cal (5-6, 2-6 Pac-12) has already exceeded all external expectations in Wilcox's first season. Wilcox can become the second coach in school history to take Cal to a bowl game in his first season. Steve Mariucci's only season in charge in 1996 ended with a trip to the Aloha Bowl.

UCLA (5-6, 3-5), on the other hand, was expected to be back in the mix for a division title. But Mora was fired less than a day after a 28-23 loss at No. 11 Southern California that left UCLA winless on the road, with offensive coordinator Jedd Fisch now serving as interim coach for the remainder of the season.

Senior linebacker Kenny Young was disappointed Mora would not be there for his final home game.

''He's one of the reasons why I came 1,800 miles away from Louisiana to come and be a part of this organization,'' Young said. ''He's a real mentor. He's a great guy, a great guy at the end of the day, and I wish I could have shook his hand and hugged him for my last game. But, you know, things happen.''

It could also be the Rose Bowl finale for UCLA star quarterback Josh Rosen.

Rosen, who has thrown for 3,515 yards and 24 touchdowns against 10 interceptions as a junior, said he has not yet made a decision whether to declare for the 2018 NFL draft.

''I haven't really started to form the equation yet. Maybe a few more weeks until I give you a good answer,'' said Rosen, who needs 226 yards passing to set the school single-season record.

Here are some things to watch for as the Bruins try to go undefeated at home for the first time since 2005 with a win over the Golden Bears:

RUN RAGGED: UCLA's defense allowed a season-low 153 yards rushing against USC, which will likely spare the Bruins the dubious distinction of becoming the first Power 5 team since Northwestern in 2002 to allow 300 yards rushing per game for the season. Cal running back Patrick Laird, a former walk-on, needs 51 yards to reach the 1,000-yard mark.

UNHAPPY BIRTHDAY: Cal quarterback Ross Bowers was intercepted on his last pass against Stanford, and the Cardinal held the ball for the final 7:25 to retain the Axe for the eighth straight year. Needless to say, the redshirt sophomore was not in a good mood after that throw and not even his 21st birthday on Sunday could cheer him up. ''I wasn't very much fun to be around for that weekend,'' Bowers said.

FORTY-TWO FINALE: Young was a freshman wearing No. 42 in 2014 when UCLA retired Jackie Robinson's jersey across all sports in honor of the 75th anniversary of his arrival on campus, where he became a four-sport star before breaking baseball's color barrier. Young was allowed to keep the number for the rest of his career, and Saturday will be the last time a UCLA athlete plays a home game wearing No. 42. Its significance was never lost on the leader of the defense. ''It was a responsibility upon myself that I had worn it to go out and put the jersey in a better place than I found it, and I think I did it the right way,'' Young said. ''Whatever number I wear I will always represent Jackie.''

Record-Setting Day As The SEC Returns
The SEC is known for hard-hitting defenses, but K.J. Costello clearly didn't get the memo as he knocked off defending champ LSU.
1 day ago

Social Media Reacts To Texas' Thriller
It was an epic comeback for the history books. And Twitter could hardly keep up with the fireworks.
1 day ago

The SEC Returns: What You Need To Know
Who's favored to win the SEC? Who's ranked? When will the grudge matches go down? We've got the answers ahead of Saturday.
2 days ago
those were the latest stories
Want to see more?
View All Stories
Fox Sports™ and © 2020 Fox Media LLC and Fox Sports Interactive Media, LLC. All rights reserved. Use of this website (including any and all parts and components) constitutes your acceptance of these Terms of Use and Updated Privacy Policy. Advertising Choices. Do Not Sell my Personal Info