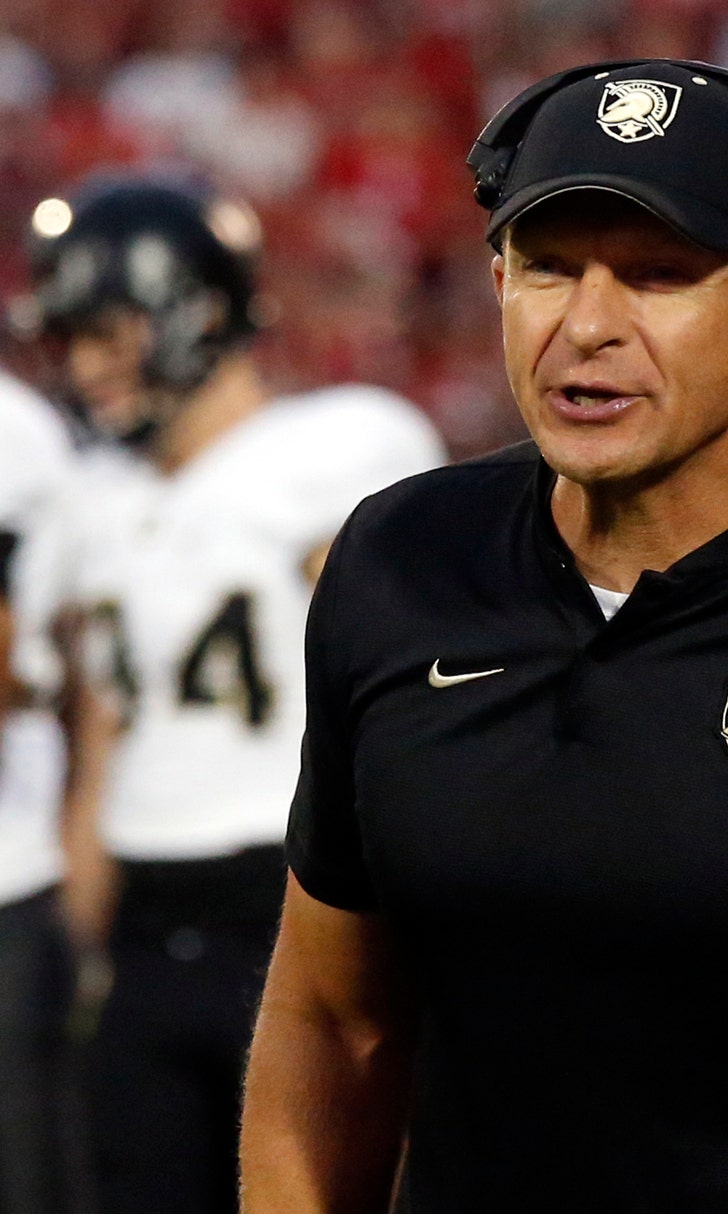 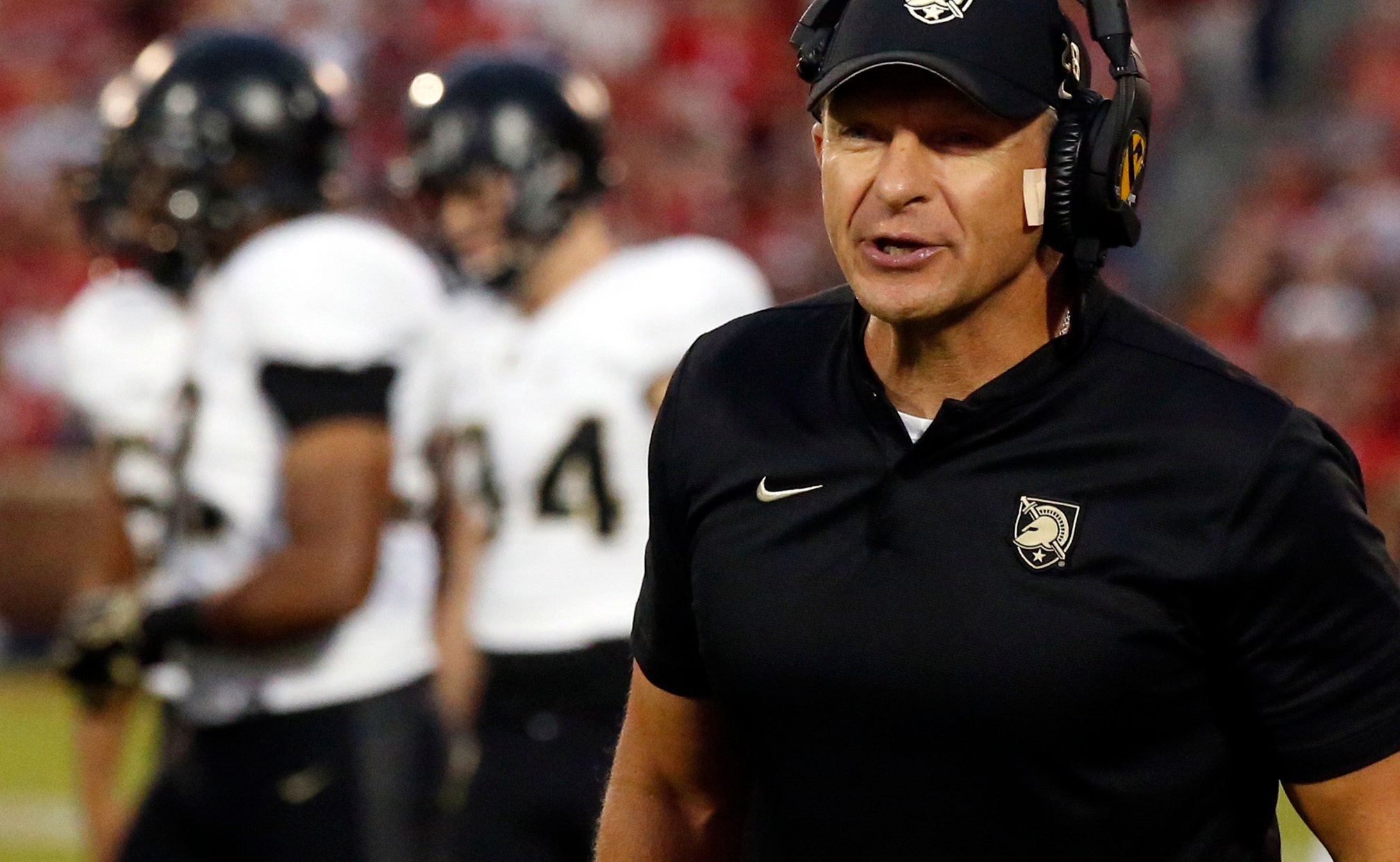 What a difference a year doesn't make at West Point.

An academy-record 11 wins last season for Army and a final ranking of No. 19 in the AP Top 25?

"I don't know if it's been a boon (for recruiting). It's still the same challenges," coach Jeff Monken said after crisscrossing the country in search of talent. "You've got to go and win the recruiting battle. Winning certainly helps you get their interest, but I don't know if winning a lot of football games helps anybody understand any more what West Point is. Some people don't realize that our guys are in college. 'Do they just get the soldiers to play? How does that work?' You'd be surprised how many times you've got to explain it."

In his five seasons, Monken has convinced enough teenagers to join the brotherhood and make some history at West Point. Two years ago the Black Knights matched the school record with 10 wins and last season, the first year that every player on the roster was recruited by Monken and his staff, Army broke that record, finishing 11-2, won its third straight bowl game , and captured the Lambert Trophy , given annually to the top FBS team in the East.

The last time the Black Knights won the Lambert, to be awarded Thursday, was after Pete Dawkins led them to their last unbeaten season (1958) and won the Heisman Trophy.

"It means our players did a great job. I didn't have to play a single play the whole year," said Monken, whose fiery demeanor in practice and on the sideline is mirrored by his players on the field. "That's a recognition of our team and our team's success. I'm proud that the folks that picked those things recognized that our team did a really good job this year."

Monken was recognized, too. He won the George Munger and Vince Lombardi coach of the year awards and was one of seven finalists for the Paul "Bear" Bryant Coach of the Year award that went to Dabo Swinney of national champion Clemson.

When he was hired in December 2013, Monken inked a six-year contract. The academy extended that deal for two more years prior to the 2017 campaign and last month Monken agreed to another extension, through the 2024 season.

"I hope it helps (recruiting)," Monken said. "Everybody wants to know that they're going to a program where there's stability. There is a commitment to keep stability in the program. It does help to be able to say this is a commitment our academy has made to the program."

The Army brass thought Monken was the right person for the job and his record validates the decision to hire him, with 29 wins in the past three seasons using an approach that's blue-collar to its core.

"When it got down to it, we talked to Jeff probably two hours in the first face-to-face meeting," Army athletic director Boo Corrigan recalled. "He didn't stutter, he didn't stammer. He talked about what he sees from a team. It was just so well-aligned with who we are as an academy that it really stuck with myself and the superintendent. He was the right fit, and fit is so important. The goal is to keep him here."

Monken is 35-28 at West Point and his Black Knights are riding a nine-game winning streak heading into next season. They've also won 13 in a row at Michie Stadium and haven't lost at home since a 31-12 setback against service academy rival Air Force in November 2016.

More importantly, the Black Knights remained top dog among the three service academies, winning the Commander In Chief's Trophy outright for the second straight time. Defeating archrival Navy in 2017 and again in December after having suffered 14 straight losses to the Midshipmen top the list of Monken's accomplishments.

In other words, there's a big reason he says "Beat Navy!" at the end of almost every conversation.

"I knew the (Navy winning) streak was a big deal, but it wasn't like every day I was staring at the word streak," said Corrigan, who will depart West Point in May to become athletic director at North Carolina State. "But when we won, to see just the raw emotion of people and to see what it really meant to people truly hit home. That weight was being carried by a whole lot of people. It's not something we have to talk about ever again."

The 50-year-old Corrigan, who began his stint at West Point in 2011, will leave behind plans to renovate Michie Stadium. He said construction will commence once the project is completely funded and will include close to 2,000 premium seats and an assortment of luxury suites.

"Our focus has been on people. We're in the people business at the end of the day," Corrigan said. "Now, it's time to turn our attention to upgrades of the stadium and we've had really good reception in raising the money."

As for recruiting, Army always signs multiple players at each position and the staff takes it from there. The new class won't be announced until July.

"I'm most proud for our seniors this year to be able to accomplish what they did," Monken said. "Hopefully, the seniors coming up will add to that and set some marks of their own.