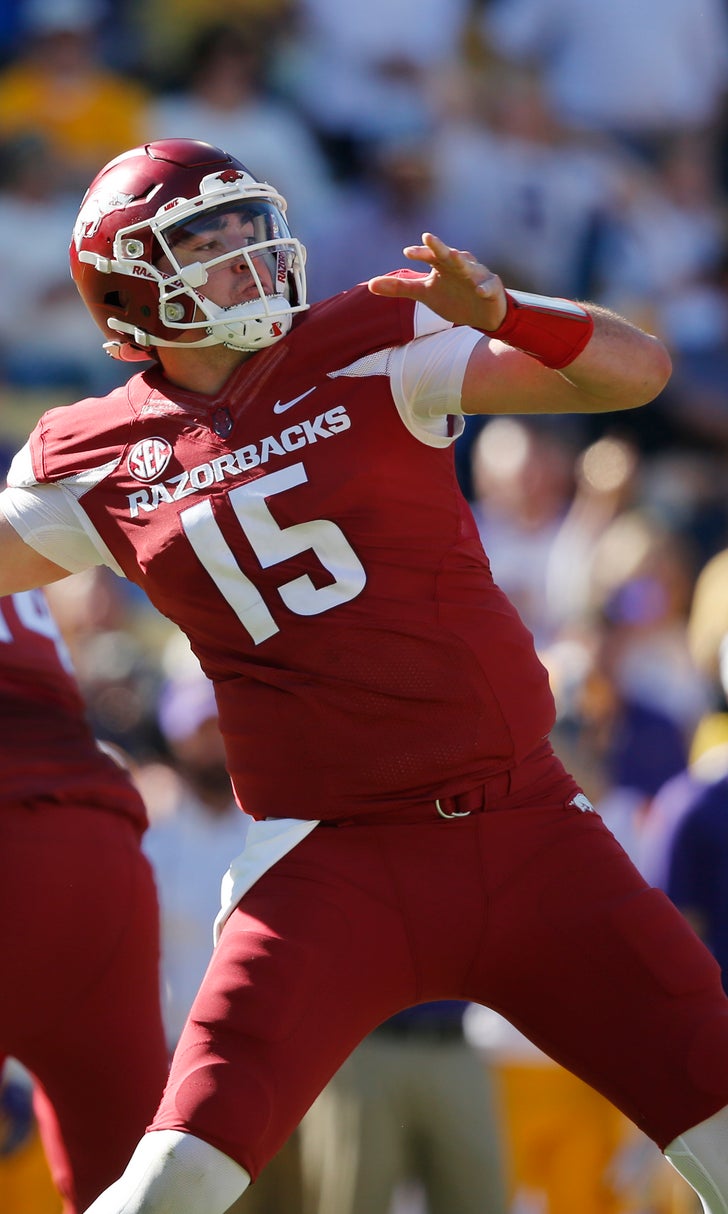 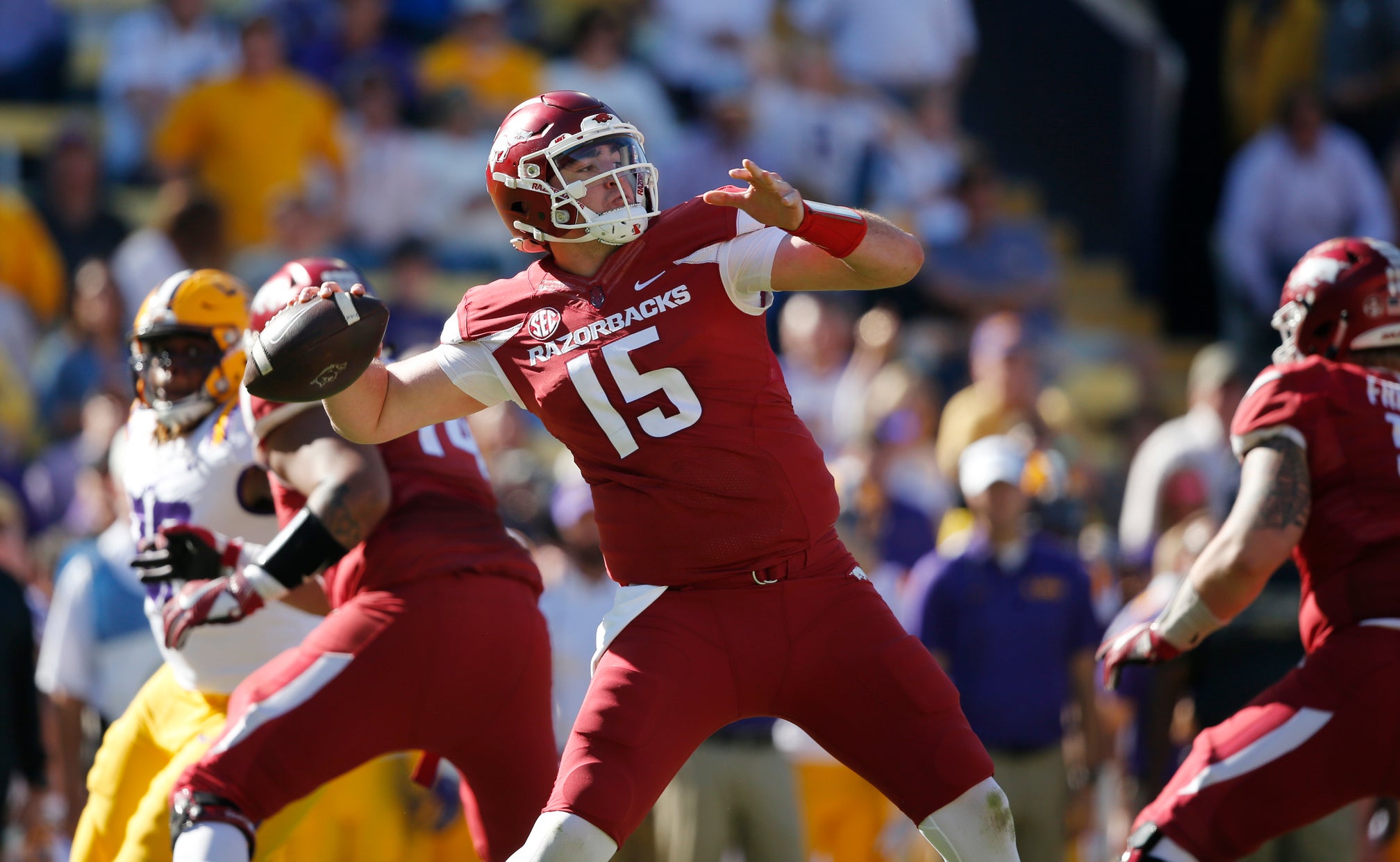 Arkansas intent on a quick turnaround under Chad Morris

FAYETTEVILLE, Ark. (AP) — Dre Greenlaw thought winning a minimum of seven games last season was a given for Arkansas.

That false confidence is what made life even more difficult for the Razorbacks linebacker as hopes of a fourth straight winning record came crashing down.

"About Game 7, you could feel the emotional drain start wearing on you," Greenlaw said of Arkansas' 4-8 record a year ago. "It was like, 'Dang, this is really happening.'"

Greenlaw's disappointment was shared by many across Arkansas a year ago, resulting in the firing of coach Bret Bielema after five years and the hiring of Chad Morris away from SMU.

Morris brings to Fayetteville a reputation as an offensive guru, thanks to his time as offensive coordinator at Clemson and how he rebuilt SMU's offense during his three seasons there. More than that, however, he brings hope to a program mired in one of the worst six-year stretches in school history — and by far its worst since joining the Southeastern Conference.

It's hope even the upperclassmen have bought into, even if the turnaround takes longer than they will be around.

"I think the future for Arkansas football is in great hands," said Greenlaw, a senior.

Arkansas was picked to finish last in the SEC West this season, an indicator of just how far it had fallen by the end of Bielema's disappointing tenure.

While the transition from Bielema's more-traditional approach to Morris' up-tempo look isn't likely to be perfected in one season, the Razorbacks have had just about all they can handle of finishing last in the SEC West.

And last year's 1-7 record in the SEC is plenty of motivation to avoid another last-place finish.

"We finished 4-8 last year, and everybody who was here last year is tired of hearing that," senior linebacker Randy Ramsey said. "We just want to come out and prove everybody wrong this season."

Morris has yet to name a starting quarterback during his first preseason camp in Fayetteville alongside first-year offensive coordinator Joe Craddock. Sophomore Cole Kelley and junior Ty Storey seemed to be the top two candidates to replace graduated starter Austin Allen, though Morris isn't ruling out a freshman — or in-season changes at the position as called for.

"Just because we get to the point where we do name one, it doesn't mean it's a lifetime contract," Morris said. "They've all got to keep pushing and getting better."

Arkansas was 114th in the country in scoring defense a season ago, allowing 36.2 points per game. The Razorbacks hope to improve this season because of the return of experienced players such as Greenlaw and Ramsey, along with junior defensive lineman McTelvin Agim. The biggest change, however, has been the addition of first-year defensive coordinator John Chavis , the former Texas A&M assistant. Chavis won the Broyles Award as the nation's top assistant coach while at LSU in 2011, and Arkansas' defensive players have embraced his belief of putting opposing quarterbacks under constant pressure.

Arkansas' weakest area a year ago was its offensive line, which was 113th in the country while allowing an average of 2.92 sacks per game. The line has also been Morris' top concern during the preseason, thanks to a knee injury that will keep senior Deion Malone out for the season. Also, junior Colton Jackson is likely to miss the first six games after offseason back surgery and freshman Dalton Wagner is out for at least a week after surgery to remove his appendix.

Arkansas opens its season by hosting Eastern Illinois on Sept. 1. The game will be the first in Razorback Stadium after its $160 million renovation, bringing its capacity to more than 76,000.

Arkansas had been scheduled to host Michigan this season, but the Wolverines pulled out of the game two years ago — leaving the Razorbacks scrambling to fill out their schedule. In place of Michigan, Arkansas will travel to face Colorado State on Sept. 8 before hosting the Rams next year. For the Razorbacks to reach a bowl game in Morris' first season, they likely must sweep their non-conference games against Colorado State, Eastern Illinois, North Texas and Tulsa. The SEC slate includes home games against Alabama and LSU and road games against Auburn and Missouri.