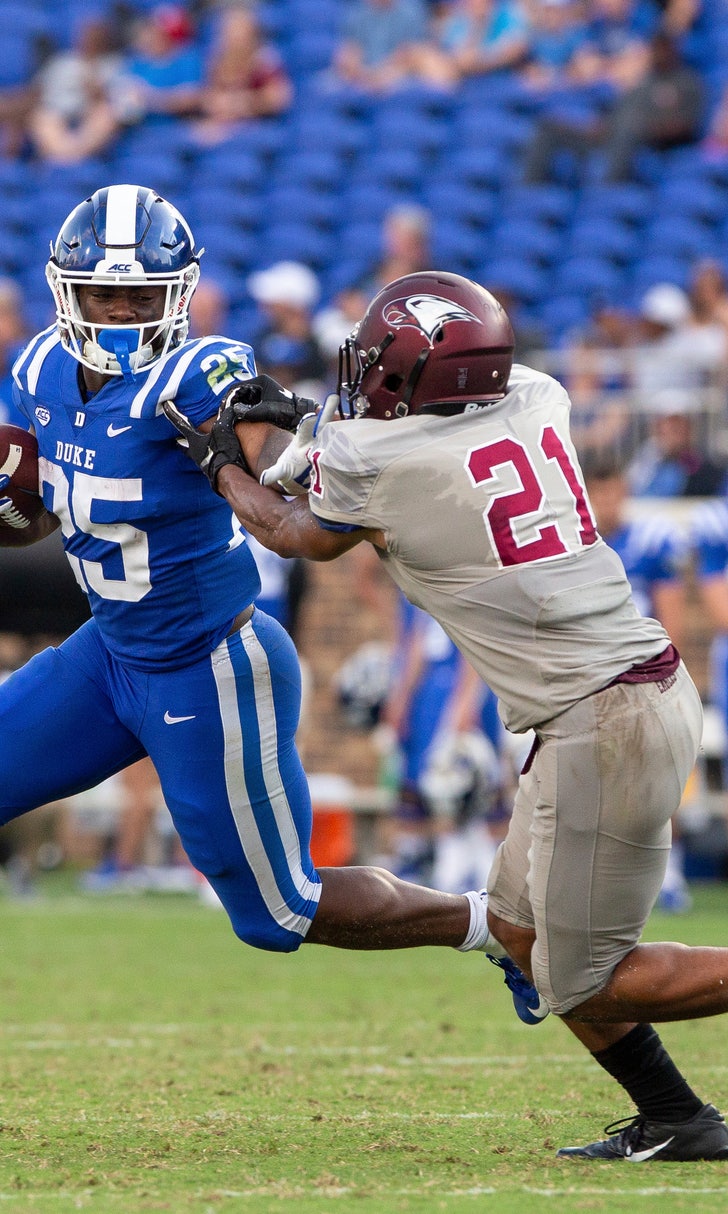 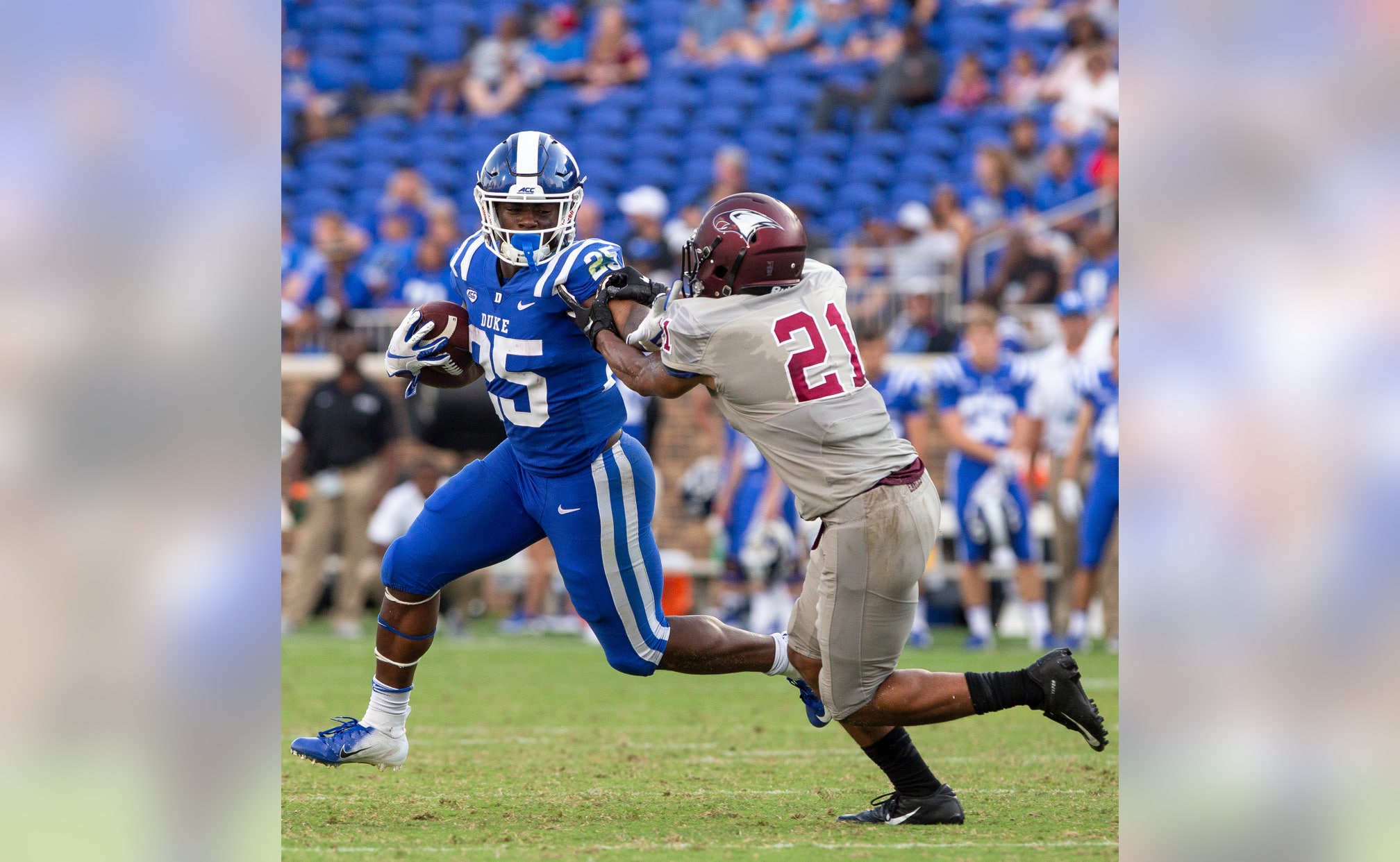 The AP college football poll had a basketball feel this week.

Kentucky and Duke moved into the Top 25 for the first time this season Sunday. For the Blue Devils (4-0) it is their first appearance since October 2015. It has been a lot longer for the Wildcats, who were last ranked in November 2007.

The last time the schools that have combined for 13 NCAA basketball championships were ranked in football at the same time was the 1957 AP preseason poll. The last time it happened during the season was Oct. 10, 1955.

The Blue Devils and Wildcats were two of the five teams to move into the rankings this week after seven ranked teams lost Saturday, five to unranked teams. No. 24 California and No. 25 Texas Tech also made their season debuts, and No. 18 Texas re-entered the Top 25.

The voters are churning through teams at the back half of the rankings, which is pretty typical at this point in the season. An interesting omission was Maryland (3-1). The Terrapins beat Texas in the opener and added a lopsided victory against Minnesota to its easy win against Bowling Green. The Maryland athletic department is in turmoil, but the team has played well with head coach DJ Durkin on administrative leave — not including a puzzling clunker against Temple.

As the voters try to find teams that can stick on the back end, the best teams are mostly rolling along, giving Heat Check little to complain about there.

QB Tua Tagovailoa has thrown for 1,033 yards and 12 touchdowns and has yet to attempt a fourth-quarter pass.

Bulldogs coach Kirby Smart was Saban-esque, with plenty to complain about after beating Missouri comfortably on the road.

The Tigers could be double-digit favorites against every team left on their schedule, especially with QB Trevor Lawrence ascending.

Heat check: A touch too hot.

The Buckeyes have four players (Parris Campbell, K.J. Hill, Terry McLaurin and Austin Mack) ranked among the top 15 in receiving yards in the Big Ten.

The Tigers could be this year's Miami. Very good. Not quite as good as the ranking.

Almost losing to Army is not a good look, but it might not be all that meaningful because nobody plays like the Black Knights.

The Cardinal were more fortunate than good against Oregon.

Heat check has been worried about that Notre Dame offense. Less so now, but it should be noted that Wake Forest fired its defensive coordinator Sunday.

Heat check: Too hot, but less so than previous weeks.

The Nittany Lions are lacking only a signature victory. Here's the chance.

Next: vs. Southern Mississippi.

The Tigers slipped a bit after beating Arkansas by 31. Clearly penalized by voters for not using a fake fair catch to score a touchdown against the Razorbacks.

The Cougars could really help the Huskies by losing this week and then finishing the season strong.

The competition has been sketchy at best but LB David Long and the Mountaineers' defense has been pretty good. Better tests are coming, though.

Most Knights fans understood Scott Frost's leaving for Nebraska, but some can't help but enjoy the Cornhuskers' woes.

Time to see if the Wolverines' suddenly productive offense travels after three easy wins at the Big House.

Reason for concern: The Badgers' usually stingy defense ranks 74th in the country in yards per play allowed (5.52) without facing any top-notch offenses.

Next: vs. North Carolina

The Hurricanes lead the nation in tackles for loss with 46 and DL Gerald Willis III is tops in the country with 10.

Next: vs. South Carolina

Next: at Kansas State.

It really is OK to be late to the Longhorns' bandwagon, but this current surge seems like a significant step forward.

The Ducks looked like a legit top-20 team for most of the night against Stanford. They moved up in the poll after the loss, but maybe not enough.

The Cougars will ride that Wisconsin victory for another week at least.

Next: vs. Central Michigan

The Spartans running game has been bogged down, averaging only 3.29 yards per carry, second-to-last in the Big Ten.

Next: vs. Virginia Tech

The Bulldogs did a full face-plant against Kentucky, but the biggest issue might be completing less than 50 percent of their passes on the season.

If you're ranking BYU, guess you also have to rank the team that won at BYU. And maybe the Bears should even be ahead of BYU. This feels like another short-stay team.

The Red Raiders are last in the Big 12 in yards per play allowed, but they have forced seven turnovers and have 30 tackles for loss. The defense is better, but still not good.

Should be out: Michigan State and Texas Tech. Should be in: Maryland and TCU. The Horned Frogs pass the eye test.