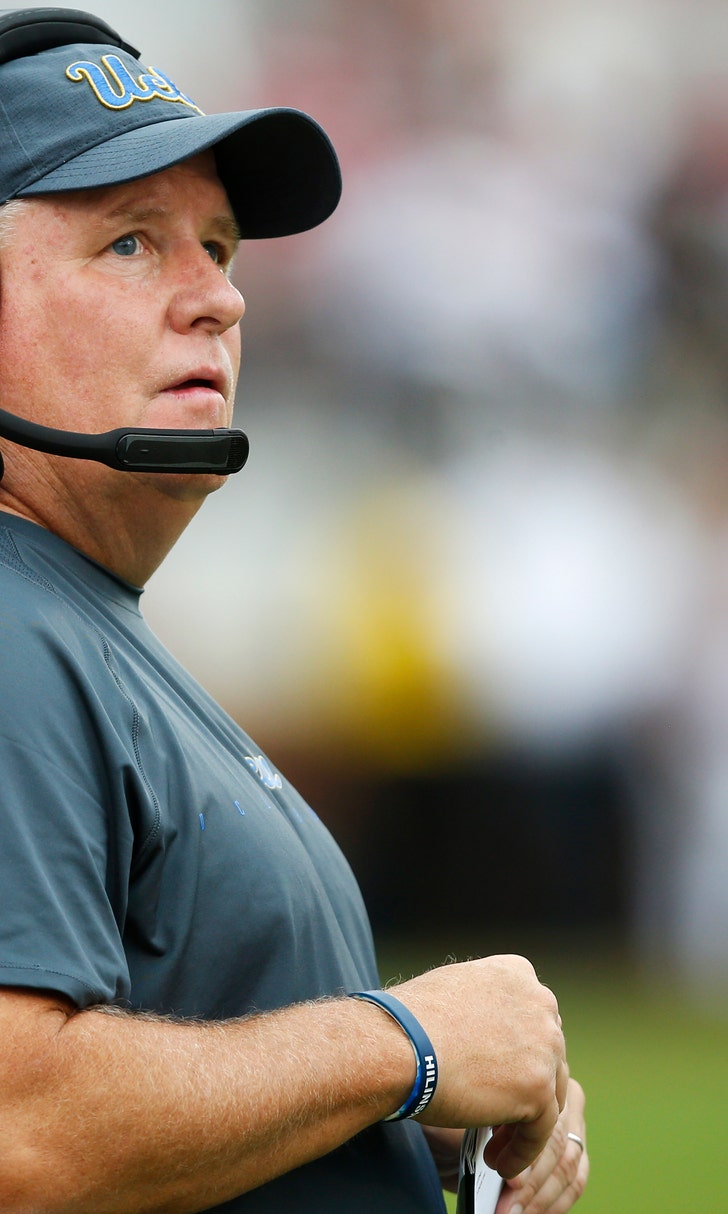 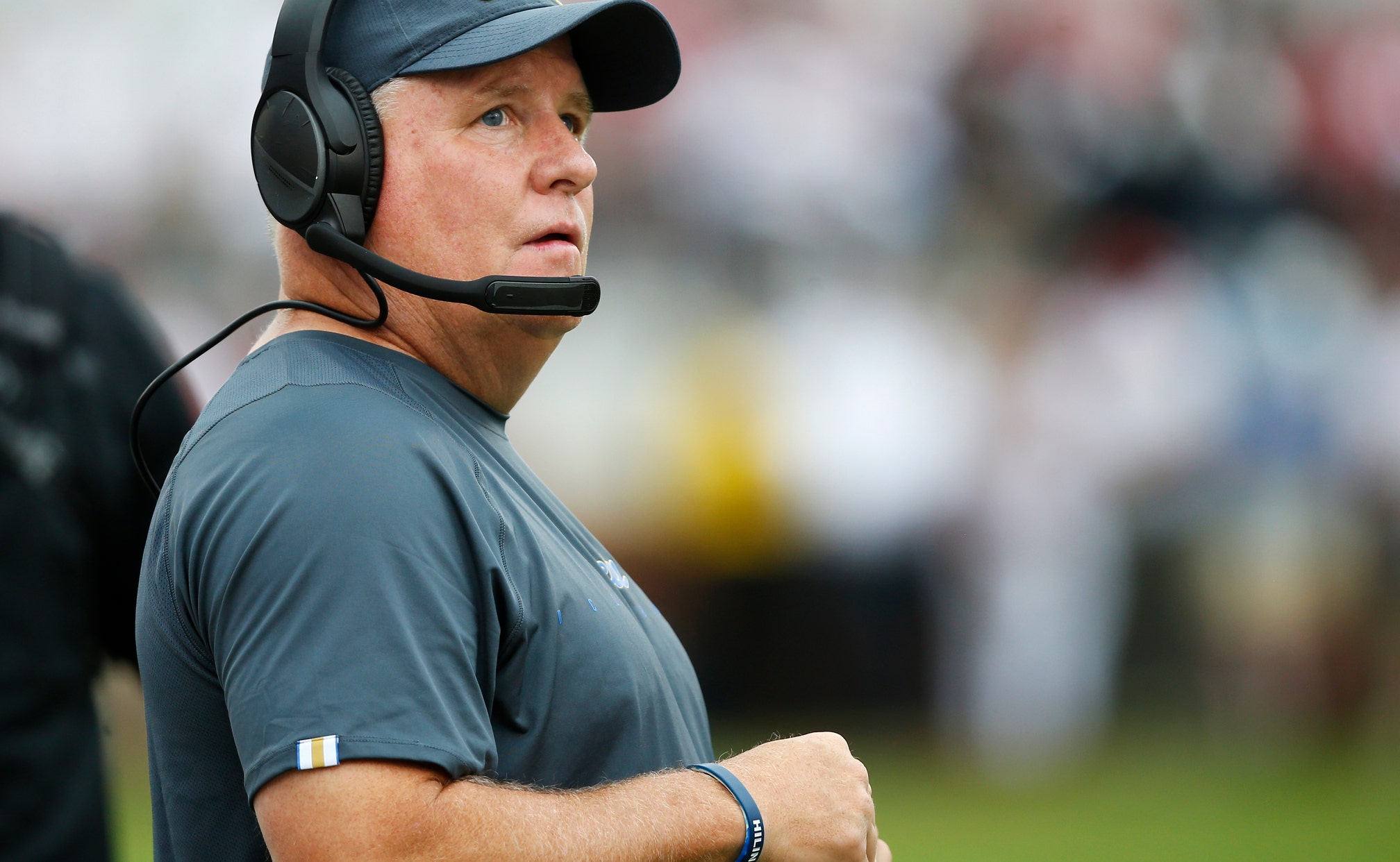 Misery loves company, and there's plenty to go around for first-year coaches at some of the high-pedigree programs in college football.

Chip Kelly is 0-3 at UCLA, Scott Frost is 0-2 at Nebraska, Willie Taggart hasn't beaten a Football Bowl Subdivision opponent at Florida State and neither has Kevin Sumlin at Arizona.

Dan Mullen has the distinction of being the first Florida coach since 1986 to lose to Kentucky and the first to do it at home since 1979. Arkansas' Chad Morris lost to lowly Colorado State and watched his punt coverage unit fooled by that faux fair catch sparking a 90-yard return for a touchdown in a 27-point home loss to North Texas.

Turnarounds? These things take time, and fans don't like waiting. But there's a reason these jobs were open in the first place. All these programs were struggling.

Kelly was the splashiest hire of all. An innovator known for his offensive wizardry at Oregon, he got fired by two NFL teams and took last year off before signing on with UCLA. He took over a program that's been in decline since 2015.

The young Bruins have lost twice at home to Group of Five teams, most recently 38-14 to Fresno State on Saturday. In between was the 49-21 loss at top-10 Oklahoma. It gets no easier. Pac-12 crossover games against Washington, Oregon and Stanford — all ranked — are looming.

Kelly wouldn't go there when asked if the Bruins took a step backward with their penalty-filled loss to Fresno State.

"You can take a macro look at what your season looks like — forward, backward, all those things," he said. "If I say it's forward or backward, that doesn't mean anything. What do we do wrong, how do we improve upon that and learn from it and grow? That's what our whole process is with these guys."

Frost, Kelly's protege at Oregon, might not have known how big an undertaking Nebraska would be when he returned home after his splendid two-year run at Central Florida. That much is apparent after a 24-19 home loss to Troy. Never mind a walk-on quarterback started in place of the injured true freshman Adrian Martinez. Special team gaffes, defensive breakdowns and untimely penalties were the overriding reasons for the loss.

Frost's position as a native son who quarterbacked the Huskers to a share of the 1997 national championship earned him a long leash. He has a seven-year, $35 million contract.

"We have a tough game next week, and this will get worse before it gets better, but it's always darkest before the dawn," Frost said.

Unlike Frost, Florida State's Taggart is on the clock with the fans. Taggart professed the Seminoles were his "dream job," but he had no previous ties to FSU and took a sub-.500 coaching record with him to Tallahassee, though he was 25-12 the last three seasons (two at USF, one at Oregon).

The Seminoles have been nothing short of awful on offense, outscored a combined 54-10 by Virginia Tech and Syracuse, and they had to come from behind to beat Samford of the Football Championship Subdivision.

The 30-7 loss at Syracuse on Saturday — the Seminoles converted 1 of 14 first downs — sent the media scurrying to look up Taggart's contract terms. It would cost $21 million to buy him out after the season.

The Seminoles' drop-off has been sudden. Remember, it was just two seasons ago that they went to the Orange Bowl and beat Michigan in a thriller. Last year, they sneaked into a bowl but only after making up and winning a previously canceled game against Louisiana-Monroe. The spiral continues.

"We're not playing like we should be playing," Taggart said. "Our fans should be upset. Coaches. We all should be. We're not living up to expectations."

Sumlin got his first win at Arizona with a 62-31 victory over Southern Utah of the FCS. The season-opening 28-23 home loss to BYU looks a smidge better in the wake of the Cougars' win over top-10 Wisconsin on the road Saturday. The 45-18 loss at Houston still smarts and prompted a defensive lineup overhaul for the Southern Utah game.

The Wildcat faithful were pumped about the hiring of Sumlin, hoping he would be able to do with preseason Heisman Trophy candidate Khalil Tate what he did with Case Keenum at Houston and Heisman winner Johnny Manziel at Texas A&M.

The Arizona staff has tried to transform Tate from freelancing playmaker to a quarterback capable of making all the reads and passing from the pocket. Tate got out to a slow start, and an ankle injury didn't help matters. A feel-good 349-yard, five-touchdown passing game against Southern Utah means little in the big picture.

"Anytime you win, it's always good, right?" Sumlin said. "Your first win is something that you always remember. For us, we've been through a lot the last couple of weeks. You can take a deep breath right now, but it's back to work tomorrow."

Lurking Or Overlooked?
BYU is 9-0, but they're only 14th in the CFP rankings. And coach Kalani Sitake had thoughts on Breaking The Huddle.
10 hours ago

Tough To Go Against The Tide
Top-ranked Alabama has looked unstoppable. Can rival Auburn find any way to stop the Tide in Saturday's Iron Bowl?
13 hours ago

Happy Thanksgiving To The People
Before picking which sports stars should join the Thanksgiving dinner table, Charlotte Wilder thanks you, the sports fan.
15 hours ago