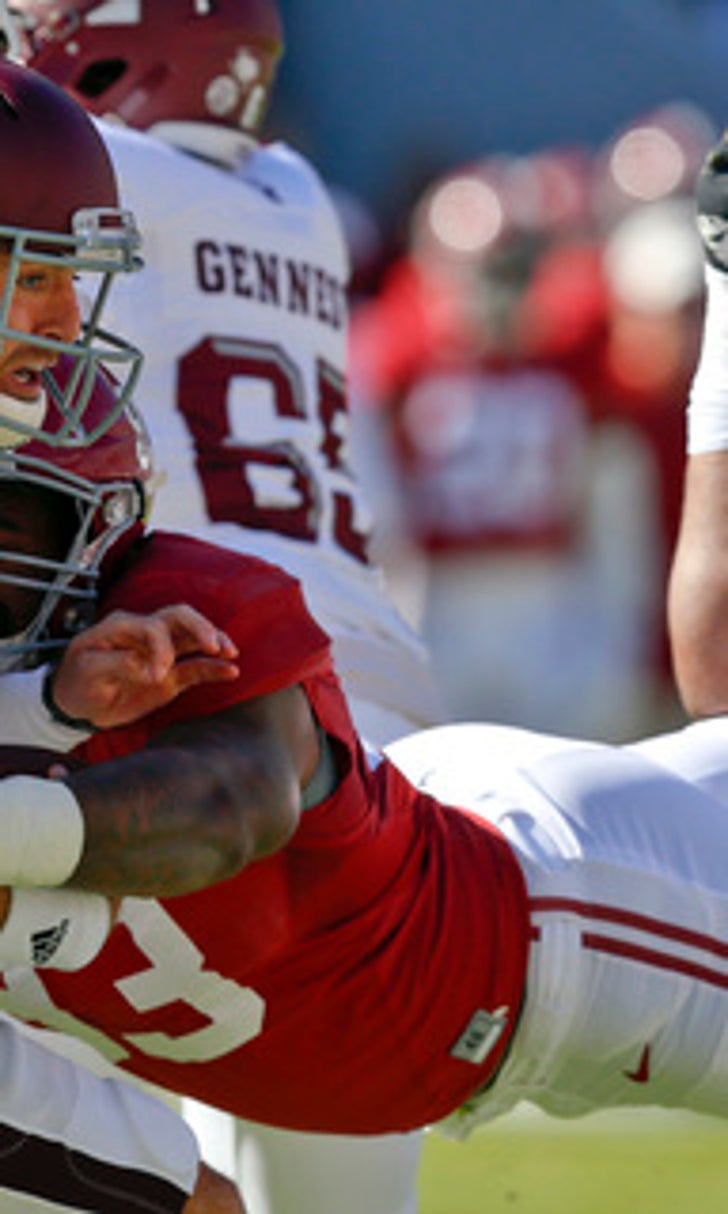 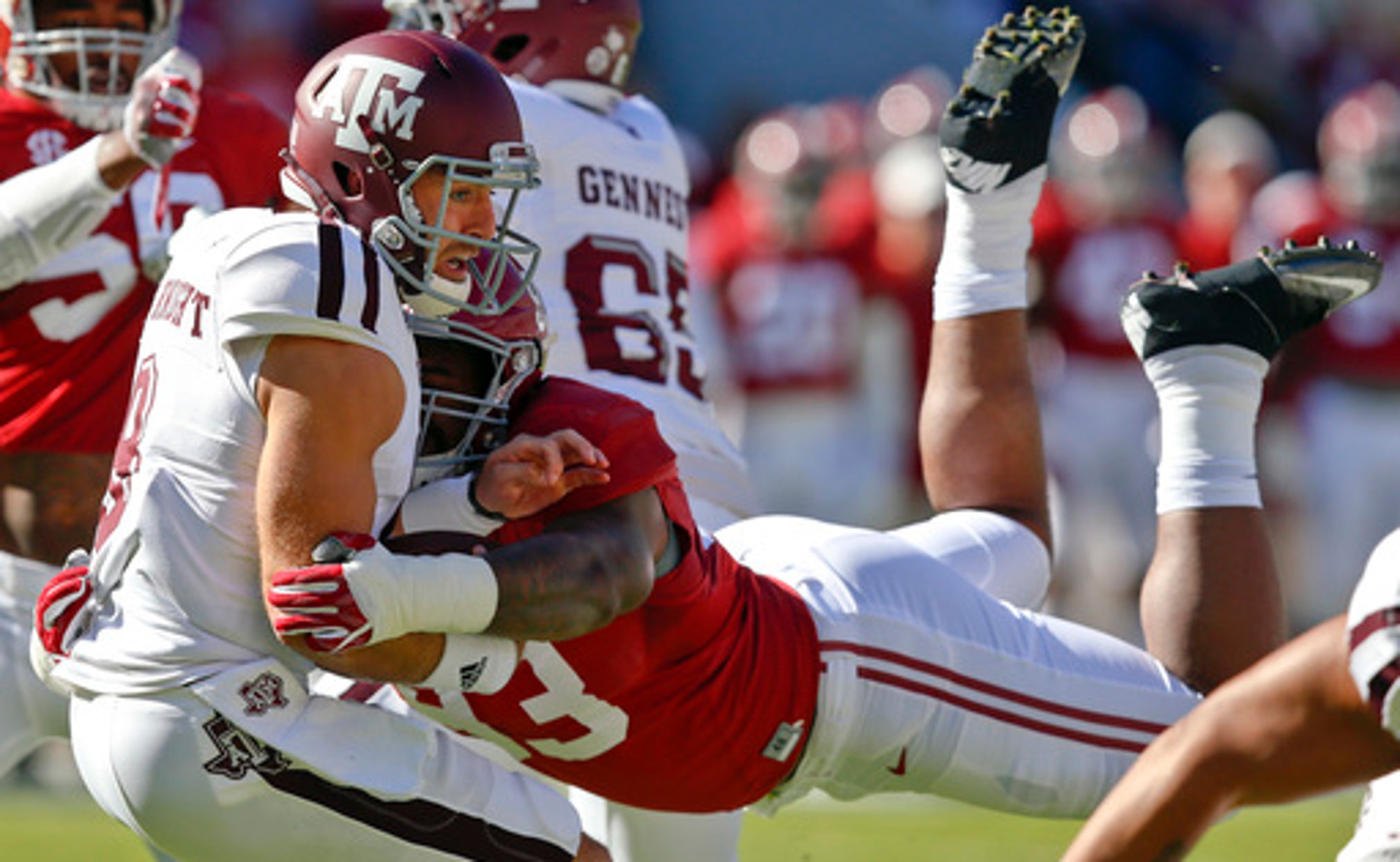 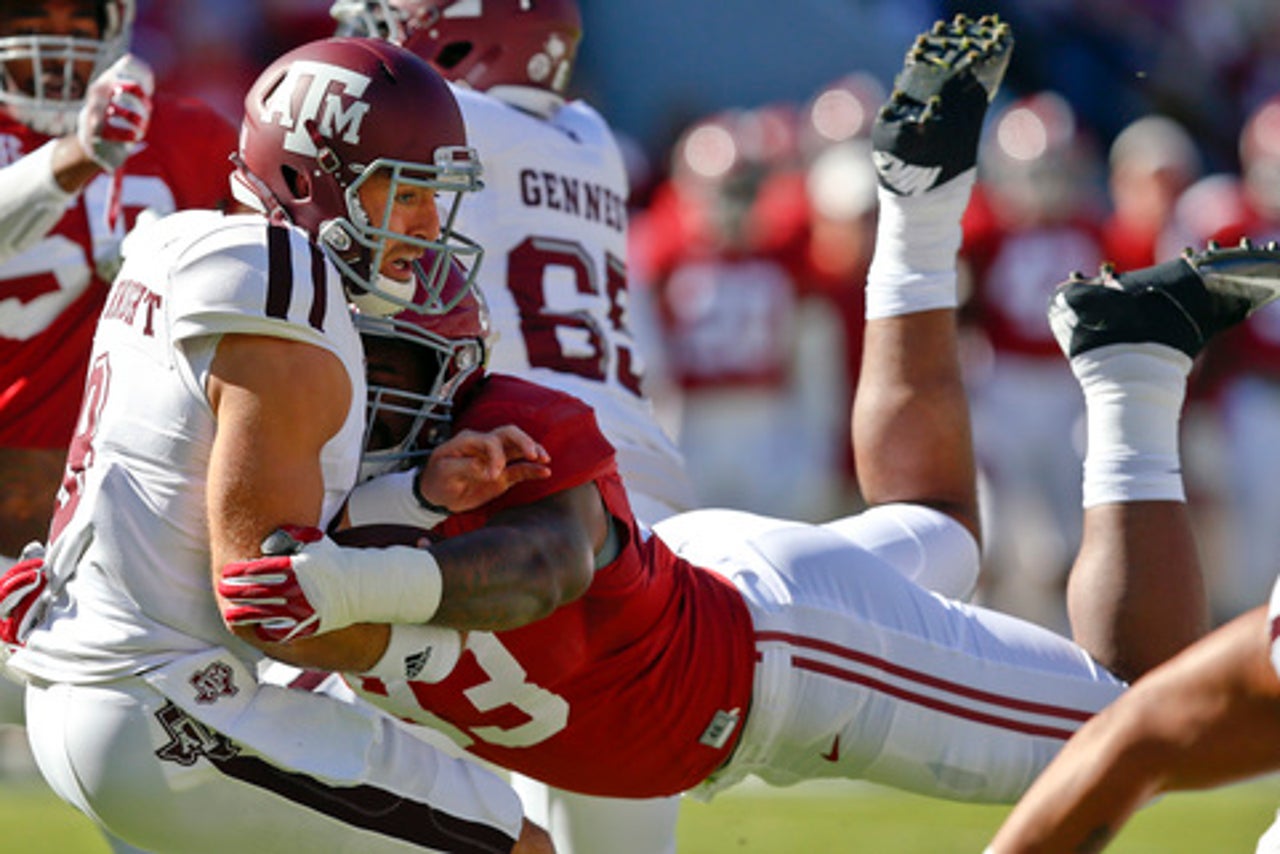 TUSCALOOSA, Ala. (AP) Jonathan Allen returned a fumble 29 yards for a touchdown late in the third quarter to help No. 1 Alabama beat sixth-ranked Texas A&M 33-14 Saturday.

The Crimson Tide (8-0, 5-0 Southeastern Conference) moved on as the powerhouse league's last unbeaten team, getting yet another in a long string of defensive scores. Allen, a lineman, scooped up the ball after Ryan Anderson knocked it loose from Keith Ford to finally build a cushion over the Aggies (6-1, 4-1), who led 14-13 well into the third.

It was 20-14 when Allen extended Alabama's streak to 10 games with a score on defense or special teams, half the duration of a winning streak now at 20 going into an open date.

Alabama's freshman quarterback Jalen Hurts then galloped 37 yards for another score, stepping out of a defender's grasp and making a nifty move to get past another. The Tide was rolling again, a powerful encore to easy wins over ranked Tennessee and Arkansas teams.

The Aggies seemed likely to put up the biggest fight, with a defense that kept the pressure on Hurts and a handful of big runs by quarterback Trevor Knight. Then Allen and Anderson changed that in an instant.

Alabama racked up five sacks of Knight, who had engineered Oklahoma's Sugar Bowl upset of Alabama as a redshirt freshman with a 348-yard, four-touchdown performance. He passed for 164 and ran for 24 in the semi-rematch.

Hurts passed for 166 yards and rushed for 93 more, throwing for a pair of touchdowns while getting intercepted twice. Damien Harris rushed 17 times for 126 yards.

Texas A&M: The Aggies led deeper into the game than any other `Bama opponent, the 6:33 mark of the third quarter. Knight made some plays with his running but was also given little time to hit receivers downfield by Allen & Co. Knight threw a pick on the first play after the defense intercepted Hurts in Alabama territory. The SEC's top running team was held to 114 yards.

Alabama: Dominated the stat sheet (303 yards to 150) in the first half but settled for two short field goals and Adam Griffith missed a third. It was enough to keep it in doubt. The defense gave up back-to-back long TD drives late in the second quarter and to open the third, but delivered big plays when it had to.

Alabama was already a near-unanimous No. 1 , but this could cause the lone holdout voter to reconsider. Texas A&M shouldn't veer too far out of the Top 10 despite the lopsided final score.

Alabama: has an open date before visiting No. 25 LSU

Texas A&M: gets a break from SEC games against New Mexico State.