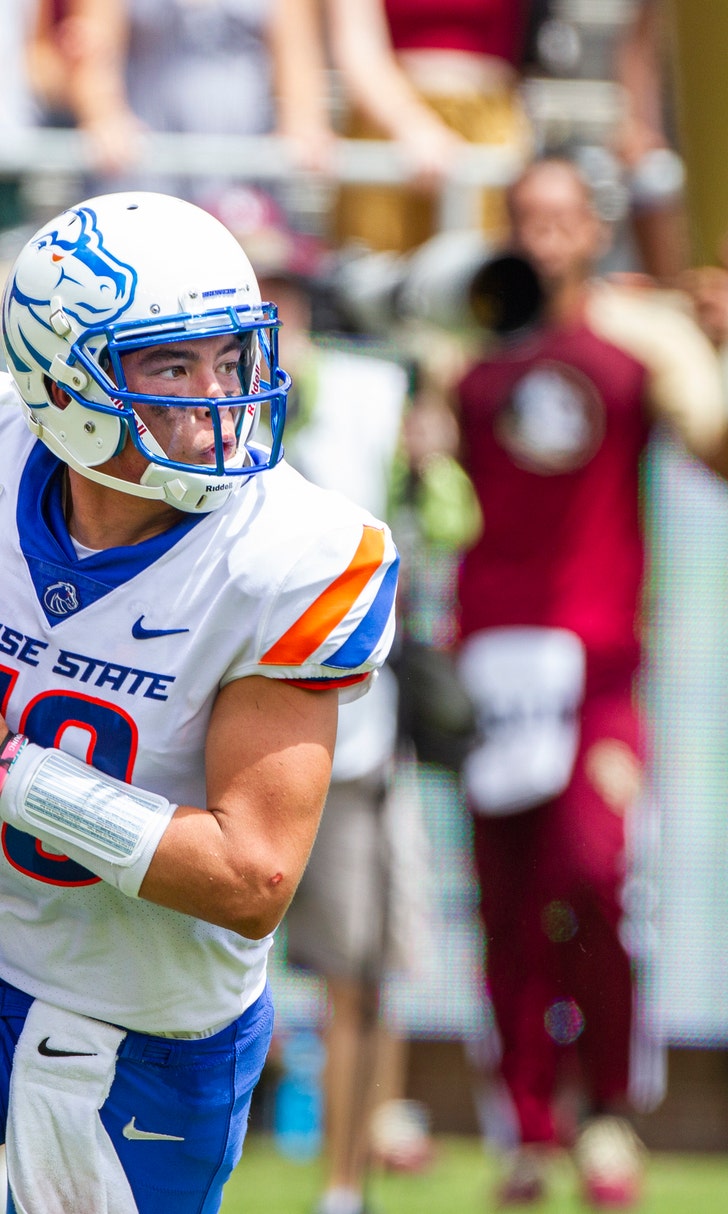 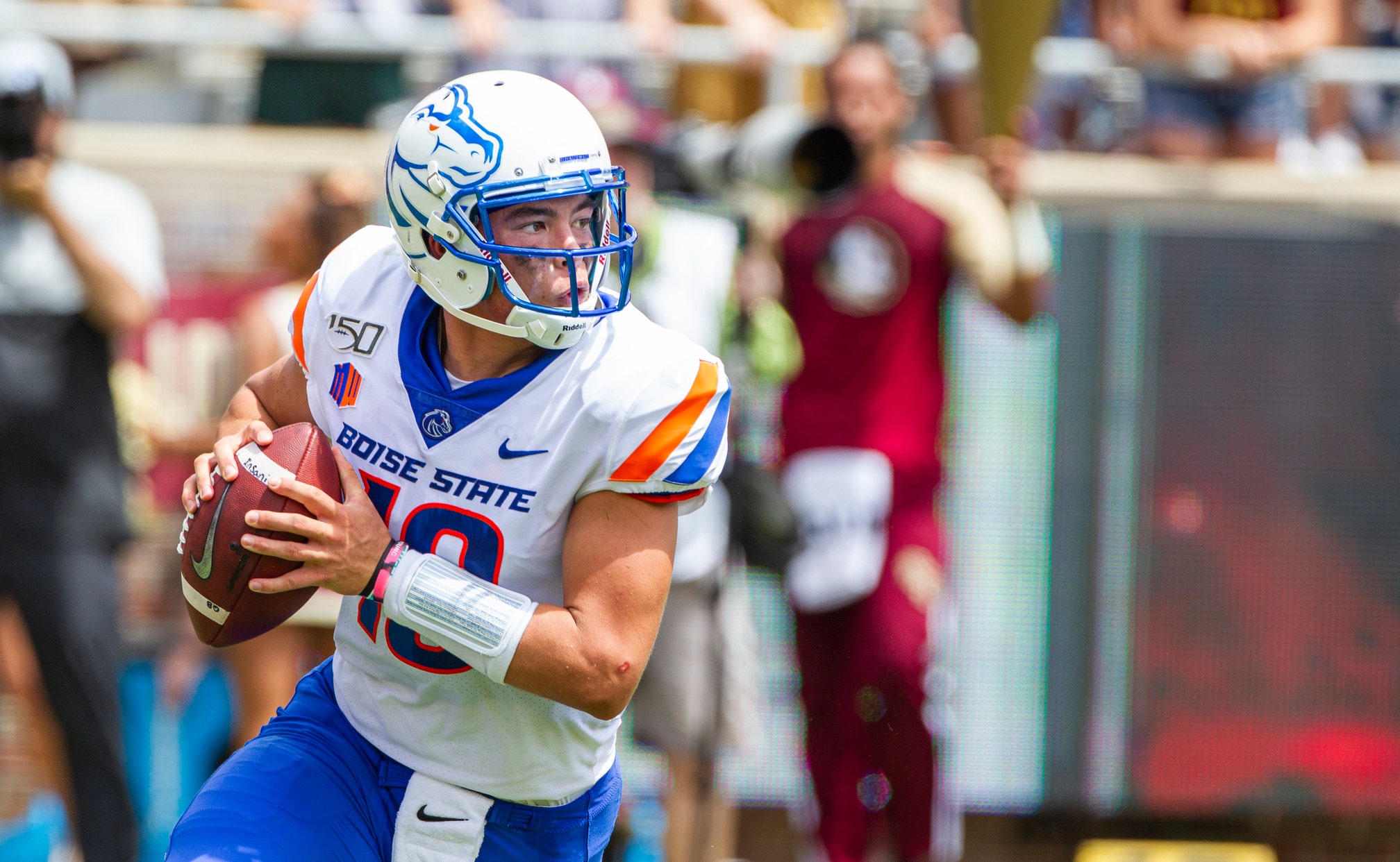 After dazzling opener, No. 24 Boise State home for Marshall

For the second straight week, Hank Bachmeier gets a chance to make a first impression.

It will be hard for Boise State's freshman quarterback to top what he did in the season opener.

"You thought after having a four-year starter at quarterback there would be a little bit of a drop-off there," Marshall coach Doc Holliday said. "But this kid, he didn't look like a freshman out there. He took some shots in that Florida State game, stood right in there and delivered the ball."

Bachmeier and the 24th-ranked Broncos play their first game on the blue turf Friday night when they host Marshall, one of the preseason favorites in Conference USA. While it's an intriguing matchup of two Group of Five teams, all eyes will be on Bachmeier.

Bachmeier helped create the excitement with his performance last week in Boise State's 36-31 comeback win over Florida State. Down by 18 in the second quarter, the Broncos (1-0) outscored Florida State 23-0 the rest of the way, with Bachmeier turning in a sterling performance. He completed 30 of 51 passes for 407 yards and a touchdown. It was the best passing debut by a Boise State quarterback since the school went to the FBS level in 1996 and the 407 yards nearly cracked the top 10 performances all time in school history.

The 18-point comeback was the biggest by Boise State against a Power Five opponent since overcoming a 14-0 hole to rout Oregon State 42-14 in 2006.

"Hank showed toughness in there and that's part of it. You don't want your quarterback to get hit but at times to stand in there and deliver a ball you've got to do that sometimes," Boise State coach Bryan Harsin said. "Just the overall game, his poise, composure and staying in it. As the game was not going our way early on I think guys mentally can get themselves out of it and it's hard to get refocused in three and a half hours and get yourself back on track and he never seemed to lose that throughout the game."

Marshall (1-0) opened with a 56-17 thumping of VMI. Sophomore Isaiah Green threw a career-high four touchdowns while the Thundering Herd compiled 620 yards of offense, including 280 on the ground. Holliday is hoping his team understands the challenge will be far different out west.

"It's a challenge we're looking forward to. I know when you're in this business as a coach or as a player, these are the kind of games that you want to go play," Holliday said. "I talk to these kids all the time because you play this great game, you get opportunities a lot of people don't get. This is one of them."

Other things to watch as the Broncos and Thundering Herd meet for just the second time:

Boise State running back Robert Mahone rushed for 142 yards and two touchdowns against Florida State, and averaged nearly 6 yards per carry. It's a pretty good start for a program trying to continue a 10-year streak of having a 1,000-yard rusher. He'll be challenged by a Marshall defense that has not allowed a 100-yard rusher in the past 15 games. Marshall was one of just four teams that didn't allow a 100-yard rusher last season, along with Clemson, Southern Miss and Northern Illinois.

Eleven different players caught passes for Marshall against VMI, including five different players with a TD catch. Corey Gammage led the Herd with five catches for 82 yards, while Tavin Richardson and Armani Levias had three catches each.

One of Harsin's big concerns going into Week 2 was that his younger players would be affected by the attention they got after the win over Florida State.

"There was a lot of hype from this last game and there can be a major hangover because of that," he said. "Everybody is on their phone, they want to see how many times their name gets retweeted and they want to see the pictures that Boise State football puts out there."

Maybe he shouldn't be as concerned as the Broncos have won 17 straight home openers.

It's been a long time since the only previous meeting between the schools. Marshall and Boise State met in the 1994 Division I-AA (now FCS) national semifinals. The Broncos pulled out a 28-24 win at home and faced Youngstown State in the national title game played on Marshall's home field. The Broncos fell in the title game 28-14.

Marshall Thundering Herd
share story
those were the latest stories
Want to see more?
View All Stories
Fox Sports™ and © 2020 Fox Media LLC and Fox Sports Interactive Media, LLC. All rights reserved. Use of this website (including any and all parts and components) constitutes your acceptance of these Terms of Use and Updated Privacy Policy. Advertising Choices. Do Not Sell my Personal Info