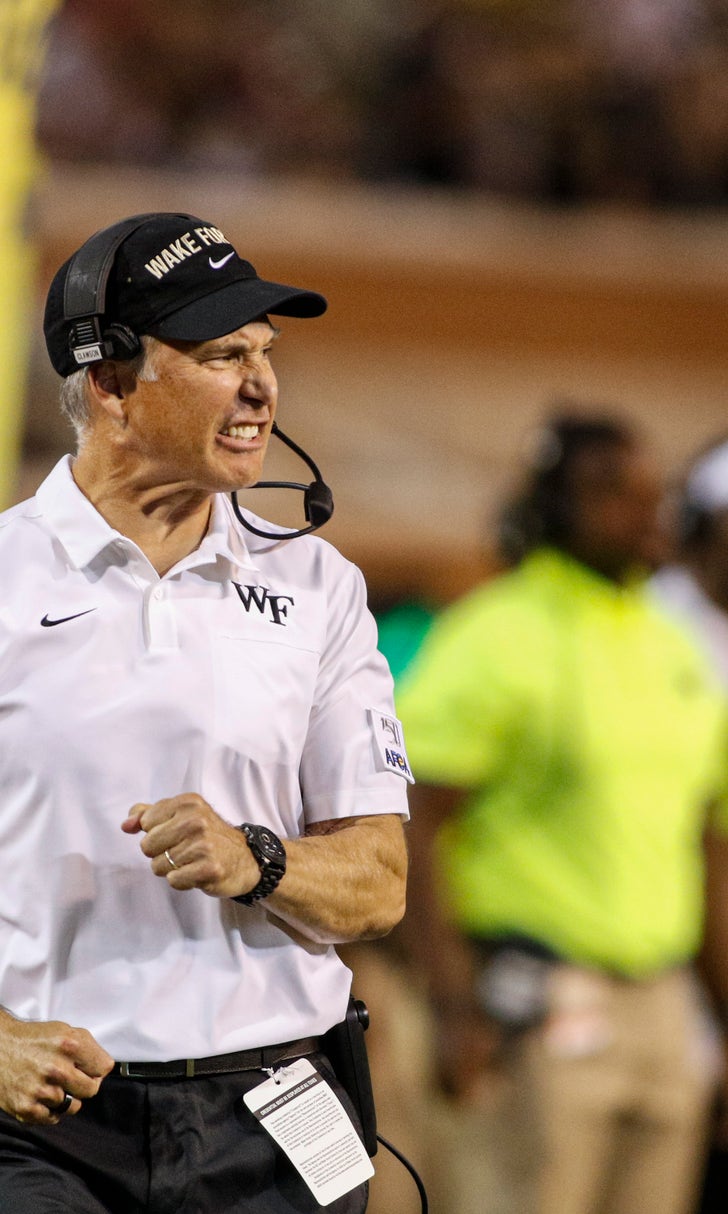 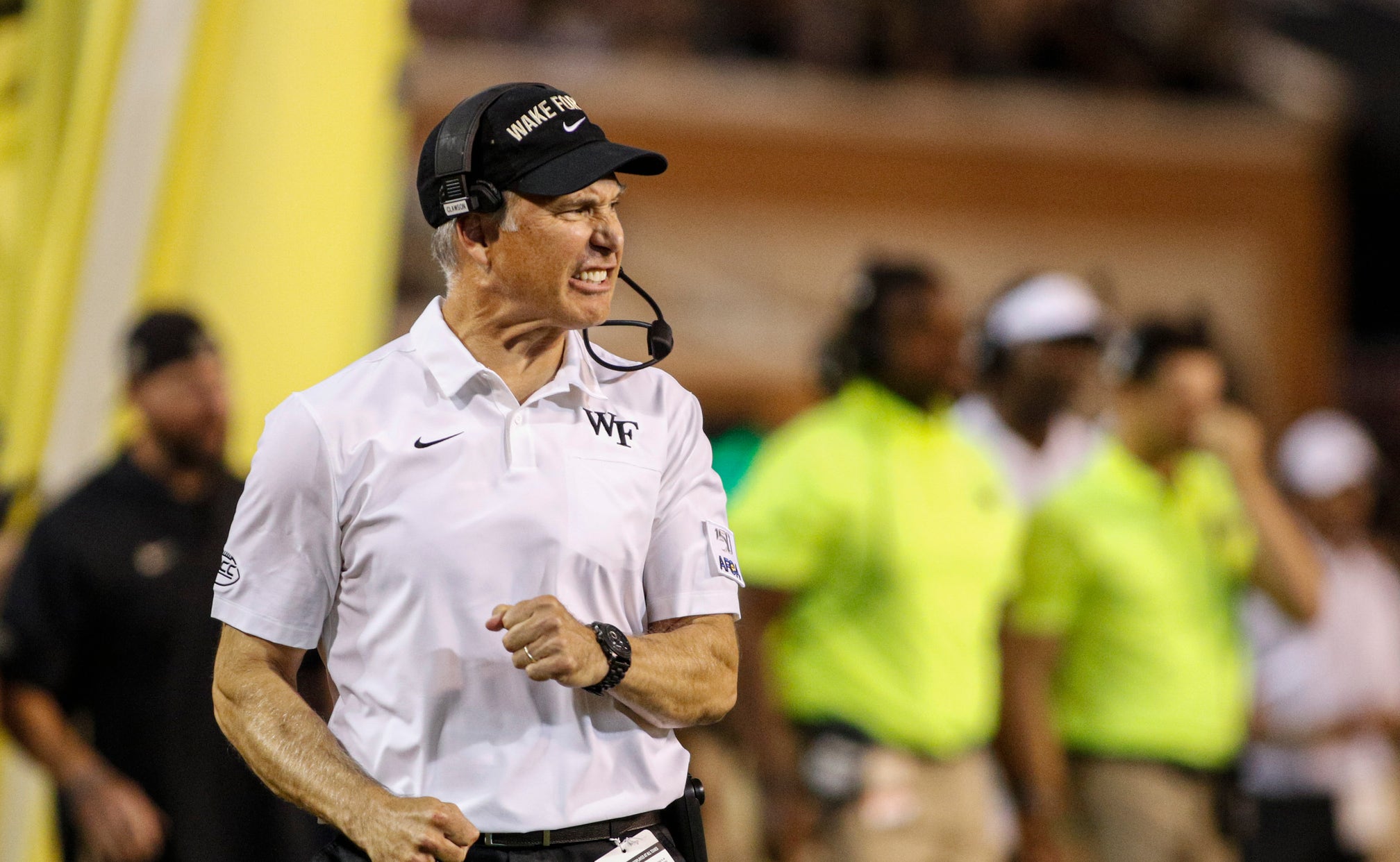 WINSTON-SALEM, N.C. (AP) — Wake Forest and North Carolina officials felt Atlantic Coast Conference schools located about 80 miles apart in the same state should not go seven years without playing each other because of scheduling issues created by expansion.

So they're doing something never before done in the ACC, or possibly any Power Five conference for that matter.

The schools scheduled a couple of games against each other that won't count in ACC standings. The first of these nonconference matchups is Friday night.

"The game is huge and we know that, but it's a weird rivalry because you're rivals, it seems like you should play them every year," Wake Forest coach Dave Clawson said. "And we certainly would be in favor of some type of setup that we get to play Carolina, Duke and N.C. State every year. That would be our preference.

"I think some people are criticizing us for playing this game. But we don't care. This is a game that we want, our fans want, our alumni want, their fans, their alumni. Games like this are good for college football."

The Demon Deacons and Tar Heels used to play each other every year in their long-running series that began in 1888. The series is now frequently on hiatus, and that's why UNC is visiting Wake Forest in this unusual nonconference setting and again in 2021 instead of waiting for the next league meeting set for 2022.

The schools announced the games in January 2015, noting it was the first time teams from the same power conference had agreed to play a nonconference game. There was a similar meeting in the Pac-12 with Colorado and California playing a nonconference game in 2011, though that was the second half of a home-and-home series originally scheduled when the Buffaloes were in the Big 12.

In this case, the longtime series between Wake Forest (2-0) and North Carolina (2-0) took a hit due a scheduling quirk as the ACC expanded.

They had played every year from 1944 to 2004, which was when the ACC expanded by adding Virginia Tech and Miami. The league added Boston College as a 12th member a year later and set up two divisions that split the North Carolina-based "Big Four" teams, with Wake Forest and North Carolina State going to the Atlantic, and UNC and Duke entering the Coastal.

After Pittsburgh and Syracuse joined as the 13th and 14th teams, the ACC had an annual eight-game league schedule that has each team play every division foes as well as a designated cross-division partner. That allows for regional rivalry games with teams in the opposite division such as UNC-North Carolina State, Florida State-Miami and Duke-Wake Forest in the ACC or Georgia-Auburn in the SEC.

But with no such designation for UNC-Wake Forest or North Carolina State-Duke (last played in 2013), those games fell into the normal cross-division rotation that takes years to cycle through.

"Even though it's not a conference game, it is a game that historically North Carolina has played," UNC coach Mack Brown said. "And it's one of the things I don't like about the expanded conferences. Wake Forest used to be a real fun game for us every year."

Some other things to know about Friday's UNC-Wake Forest game:

Brown built a top-10 national program during his first UNC tenure from 1988-97 with an emphasis on beating the other instate ACC teams. His Tar Heels won the last 16 of those games from midway through the 1992 season until his departure for Texas late in the 1997 season.

The game will feature a potential collision (or possibly multiple) between brothers Sage and Chazz Surratt. Sage is one of the ACC's leading receivers for the Demon Deacons, while Chazz is a quarterback-turned-linebacker for the Tar Heels.

The quarterbacks have been clutch. Wake Forest needed Jamie Newman's fourth-down touchdown pass to Kendall Hinton with 1:08 left to beat Utah State in the opener. And UNC true freshman Sam Howell has directed fourth-quarter comebacks to beat South Carolina and Miami — including his winning TD throw with 61 seconds left against the Hurricanes.

The Demon Deacons are expected to be without Hinton (hamstring). The Tar Heels won't have starting center Nick Polino (out indefinitely with a lower-body injury) and starting cornerback Patrice Rene (season-ending knee injury) with injuries suffered in the Miami win.

The "WakeyLeaks" scandal resurfaced as a topic again this week.

A Wake Forest former assistant coach-turned-broadcaster was fired after the school said he leaked or attempted to leak plays to opponents in 2016. That led to suspensions for former Louisville assistant coach Lonnie Galloway and Army defensive coordinator Jay Bateman — both of whom are now on Brown's new staff at UNC.

Neither Clawson nor Brown wanted to discuss it when asked.

"That was three years ago, we've moved past it," Clawson said. "There's nothing positive that comes from even going there."