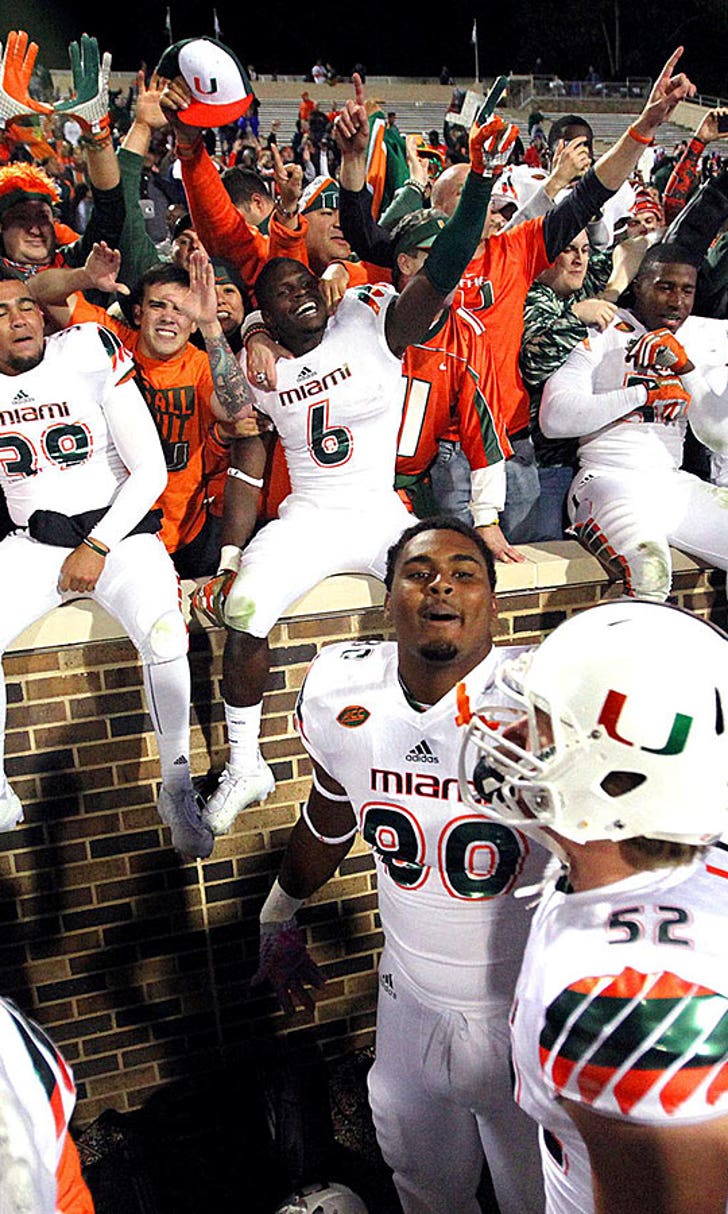 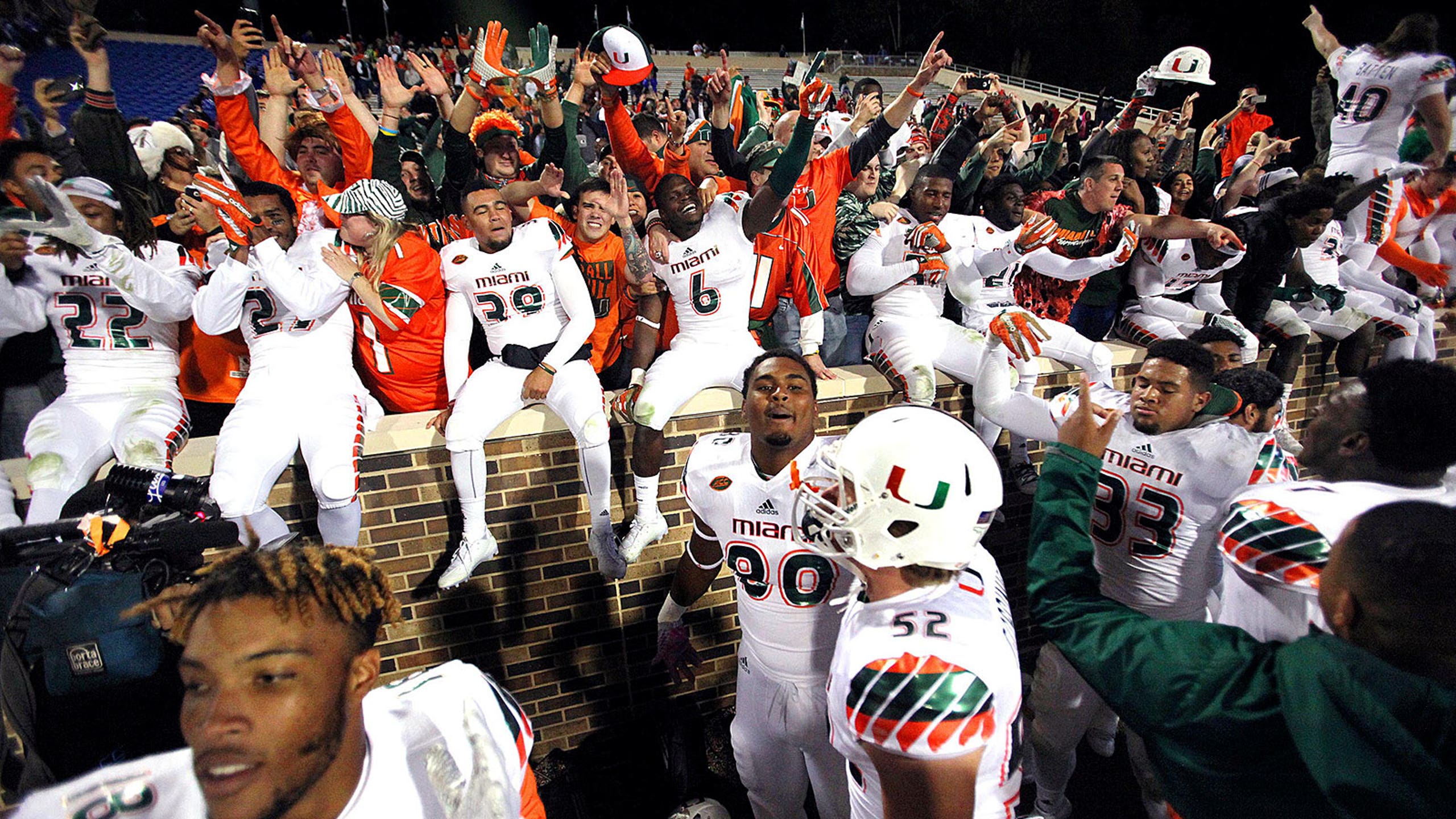 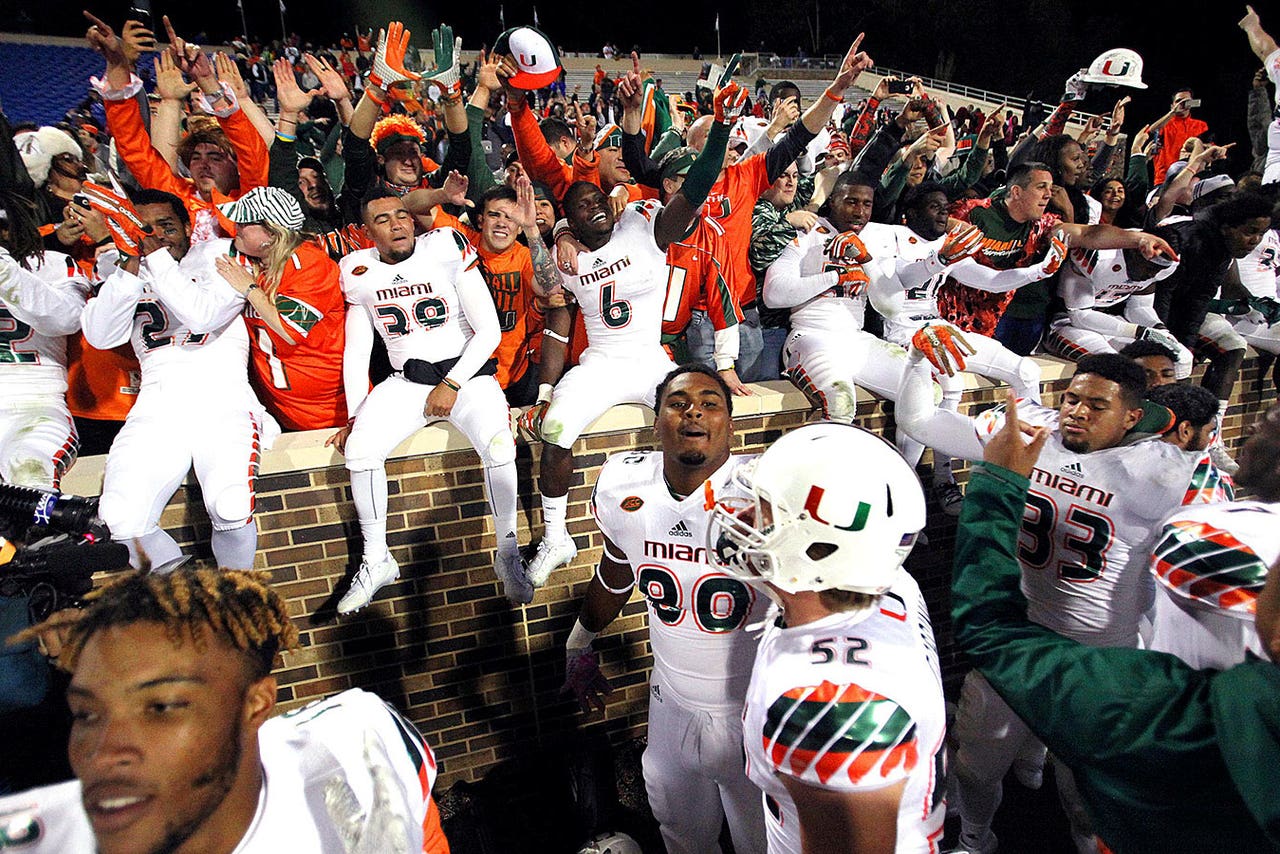 CORAL GABLES, Fla. -- The Atlantic Coast Conference threw some penalty flags of its own Sunday, suspending the officiating crew that worked the Miami-Duke game for two league contests after finding they committed "a series of errors" that allowed the Hurricanes to score a wild last-play touchdown and pull out a win.

The ACC said the crew committed four errors on that play, the most grievous being not seeing Miami running back Mark Walton's knee was down as he threw one of the eight laterals the Hurricanes used on their desperate kickoff return. If that was noticed, Duke would have prevailed since no time was left on the clock.

"At the end of the day, we got the win," Miami's Corn Elder, who took the final lateral 91 yards for the winning score, said Sunday after the Hurricanes returned from Duke. "So no matter what they say, we won. That's all that matters."

That surely wasn't Duke's opinion, nor was it that of the ACC.

"Unfortunately, there is no mechanism that I know of in place to reverse an outcome of a game," Duke coach David Cutcliffe said. "I do believe that there should be. ... What instant replay is in place for is to get it right. And we did not get it right."

In addition to not seeing that Walton was down, the ACC said the crew also missed a block in the back, erred in how they waved off an erroneous penalty call and should have penalized Miami's Rashawn Scott for running from the sideline onto the field in celebration before the play was over. None of those three events would have ended the game, but had Walton been ruled down correctly, all that would have been moot.

"I knew I was going down, so I was just trying to throw the ball back," Walton said. "The referee made a good call."

"The last play of the game was not handled appropriately," ACC Commissioner John Swofford said.

Plenty of other plays left both sides seething, including three pass-interference calls against the Hurricanes on the final drive and Miami insisting that the Blue Devils' touchdown run to end that possession -- giving Duke a 27-24 lead with 6 seconds left -- should have been negated.

Officials ruled Duke's Thomas Sirk carried the ball into the end zone; video replays were far from conclusive and Miami believed Juwon Young kept him from the goal line.

"They didn't get in," Miami interim coach Larry Scott said.

Miami was flagged 23 times -- not only a school and ACC record, but the second-most in major college football history -- compared to only five penalties against Duke. The 18-penalty disparity had been seen at the FBS level only one other time in the last 20 years. No team in the country has been penalized more this season than Miami, and the Hurricanes found the late pass-interference calls particularly troubling since one negated what would have been a game-sealing interception.

Still, Duke felt the Hurricanes got away with one.

"I certainly get what coach Scott's saying," Cutcliffe said. "I think they could have called more, to be honest with you. And that's just as honest as I can be."

The Hurricanes play host to Virginia on Saturday while Duke visits North Carolina. Duke (6-2, 3-1) still controls its destiny in the ACC's Coastal Division race, and Miami (5-3, 2-2) also remains in the division-crown mix.

The saga adds just another chapter to a most challenging few days for the Hurricanes.

And Kaaya's backup, Malik Rosier, threw for 272 yards Saturday -- then stayed behind for evaluation of an undisclosed medical problem before returning to Coral Gables later Sunday.