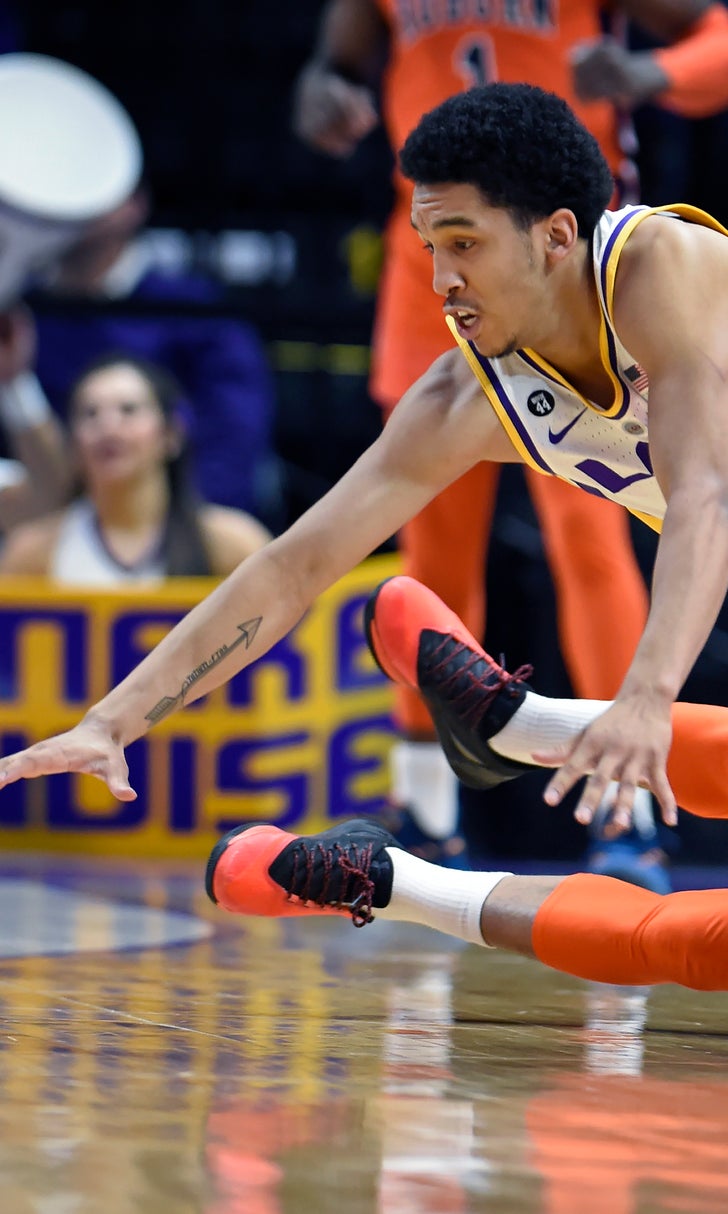 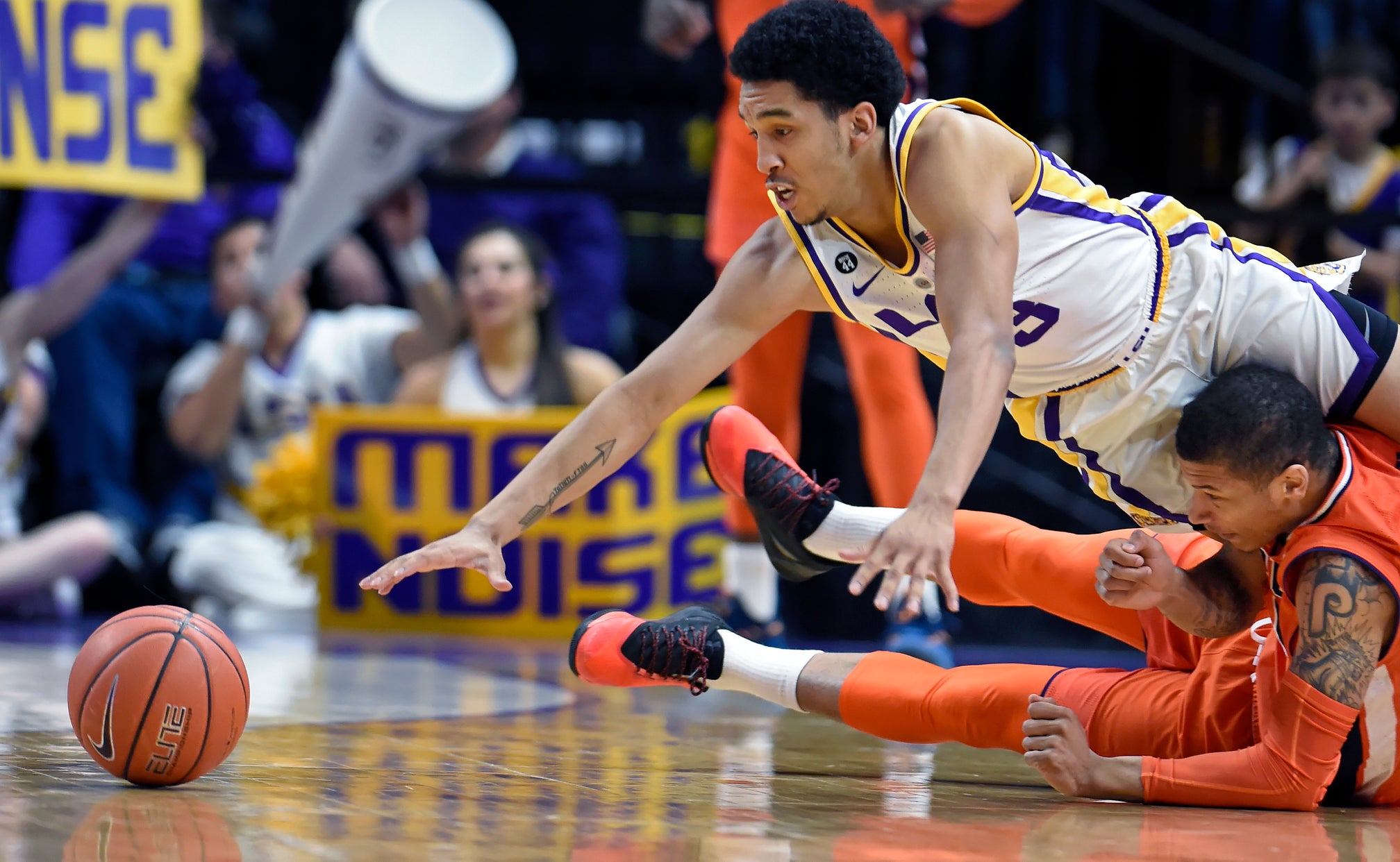 It helps to have dynamic play from experienced guards and a formidable combination of size and strength in the paint.

"We pretty much always come out and get punched in the mouth and we try to turn it around," Waters said. "As a team, we just know we have it within us to withstand a 40-minute game."

Skylar Mays had 20 points for LSU (19-4, 9-1 SEC), which bounced back from its lone conference loss with a pair of league victories heading into its trip to fifth-ranked Kentucky.

While Auburn shot better from deep, Reid and Kavell Bigby-Williams helped LSU own the paint, where it outrebounded Auburn 47-34 and outscored it 38-18.

"It was just a game of whether they were going to make more 3s or we were going to get more offensive rebounds and points in the paint," LSU coach Will Wade said.

Reid's highlights included a reverse, tomahawk dunk late in the second half. Bigby-Williams, an Oregon transfer in his first eligible season at LSU, grabbed 10 rebounds — seven on the offensive end — and threw down a couple of vicious, two-handed dunks on his way scoring seven.

"Give LSU all the credit. They know who they are and they just threw us out of the way and killed us on the boards," Auburn coach Bruce Pearl said, citing LSU's 22 offensive rebounds and 29 second-chance points. "They've just got great size — two monsters down there."

"You had to be entertained, I would think," Pearl said. "I like the way the kids kept competing. We fought through some adversity, but we did not get the job done."

Harper sank five 3s, his last with 31 seconds left to trim LSU's lead to 79-76. LSU then turned the ball over on a 5-second violation, and Auburn made it 79-78 on Chuma Okeke's layup with 26 seconds left.

After Mays hit two pressure free throws, Harper's heavily guarded 3 for the tie missed. Auburn corralled the offensive rebound for one more chance, but Bryce Brown appeared to be hit from behind as his 3 missed. Pearl screamed and gestured at officials, pleading for a foul call he never got, and Waters sealed it with two more free throws in the final second.

Auburn: Playing on the road has been difficult for Auburn since conference play began. Auburn is now 1-4 in the league away from home. Auburn exceeded its average of nearly 12 made 3s per game but had more turnovers (19) than assists (10). Auburn is 13-2 when it has more assists than turnovers.

LSU: LSU missed six of its first seven 3s and was sluggish in its perimeter defense early on but held Auburn to five 3s in the second half. LSU attempted fewer 3s (13) than Auburn made, but it was able to use its size and athleticism to impose its will — and score 31 points off of Auburn turnovers — while digging out of its early deficit. With the victory, the Tigers surpassed their overall and conference win totals from last season — with eight regular season games remaining.

LSU registered a comeback victory at Mississippi State earlier this week. The victory over Auburn further augments its credentials to climb back into the top 20.

LSU has overcome double-digit deficits in three of its past five victories — not to mention erasing Arkansas' 18-point lead last weekend before ultimately losing that game.

Auburn jumped in front by hitting eight 3s in the first nine minutes of the game, taking its largest lead when Harper hit from deep to make it 26-10.

Harper hit four of his first five from long range, reaching 14 points when his fast-break layup gave Auburn a 41-31 lead with 2:28 to go in the opening half.

But LSU held Auburn scoreless until halftime and pulled to 41-38 on Waters' right-side 3 as time expired.

"Sometimes we're hanging by a finger nail, but we hang in there," Wade said. "We're able to make plays, get back in the game and pull these out."

A Blueprint For Georgia?
The No. 4 Bulldogs shut down rival No. 7 Auburn once more, and might have showed their three keys to success along the way.
October 3, 2020
those were the latest stories
Want to see more?
View All Stories
Fox Sports™ and © 2021 Fox Media LLC and Fox Sports Interactive Media, LLC. All rights reserved. Use of this website (including any and all parts and components) constitutes your acceptance of these Terms of Use and Updated Privacy Policy. Advertising Choices. Do Not Sell my Personal Info