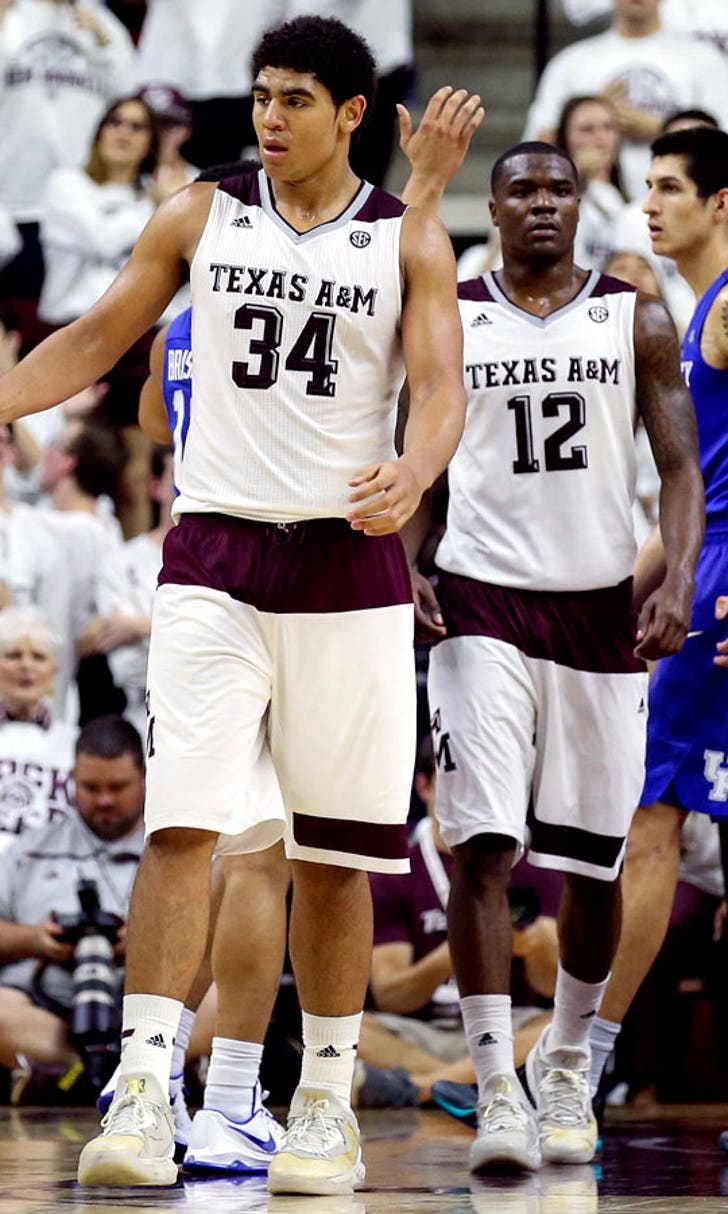 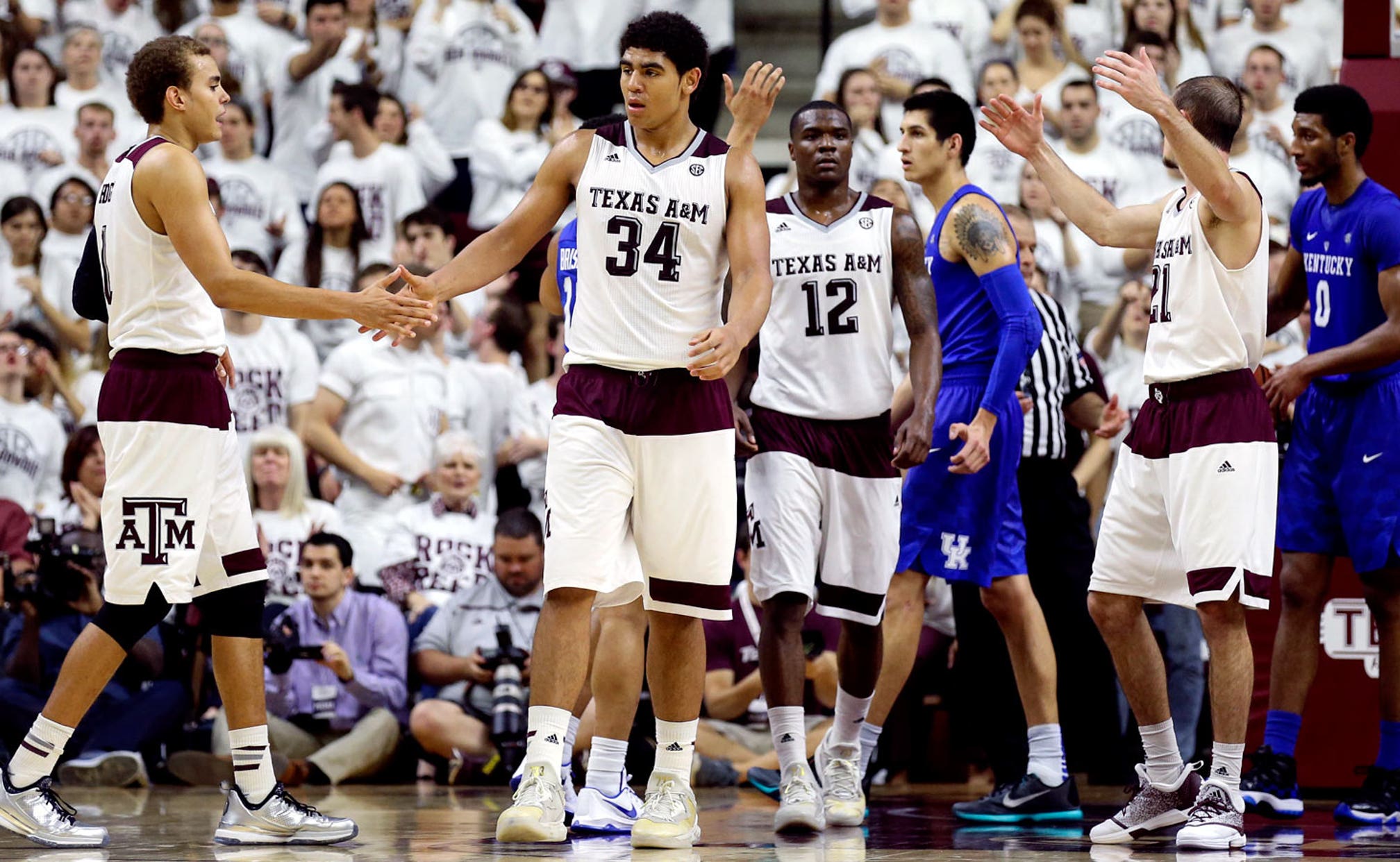 When Kentucky's Isaac Humphries got a technical late in overtime on Saturday for slamming the ball to the court, there was a lot of confusion as to exactly what happened and why.

The Texas A&M Aggies weren't worried about any of that and were overcome instead by a sense of relief — and gratitude.

"I was like, 'Thank you. We appreciate the opportunity to try and go win the game,'" Texas A&M's Jalen Jones said. "I was shocked and it ended up working in our favor. So thanks to dude on the other team."

Tyler Davis' putback at the buzzer gave Texas A&M a 79-77 win over No. 14 Kentucky after the technical foul on Humphries cost the Wildcats the lead in the final seconds.

With the clock winding down, Danuel House drove into traffic and missed a contested shot that hit the front of the rim. The ball caromed directly to Davis, who banked in a layup as time expired.

"I just tried to put it up as quick as possible," Davis said.

The freshman center finished with 15 points and 12 rebounds.

Anthony Collins missed a shot with 9 seconds left for Texas A&M (20-7, 9-5 Southeastern Conference), and Humphries pulled down the rebound with the Wildcats up by one. But after the Aggies fouled him, he slammed the ball to the court and was whistled for a technical that fouled him out.

House made both free throws to give A&M a 77-76 lead. Skal Labissiere hit one of two foul shots for Kentucky (20-7, 10-4) to tie it before the final possession.

"The play there at the end sullied up the game," Kentucky coach John Calipari said. "That's what it did."

Humphries didn't speak to reporters but tweeted "I will learn from this" about 30 minutes after the game.

I will learn from this #BBN

Tyler Ulis had 22 points and 11 assists for Kentucky, which had won four straight.

"Everybody raises their level up when Kentucky comes in," Texas A&M coach Billy Kennedy said. "They think they're going to win every game ... but we were resilient. We never thought we weren't going to win this game."

Jamal Murray scored four straight points to put Kentucky up 72-70 in overtime. A three-point play by Jones gave A&M a 73-72 lead with less than 3 minutes left in OT.

Humphries made a pair of free throws to help Kentucky regain the lead before House hit two that put the Aggies up 75-74 with 1:36 left.

Marcus Lee tied it at 68 with an alley-oop dunk on a pass from Ulis with 43.9 seconds left in the second half.

Lee blocked a layup attempt by House, and Davis fouled Lee, sending him to the line with 31 seconds to go. But his free throw bounced off the rim.

The Aggies had a chance to win in regulation, but House missed a jump shot.

Murray added 21 points for Kentucky, and Humphries had six points and 12 rebounds.

Kentucky led by three after scoring four straight points early in the second half. House and Jones then made 3-pointers on consecutive possessions sandwiched around a monster dunk by Lee to take a 45-44 lead.

A 3-pointer by Ulis gave Kentucky a one-point lead a couple of minutes after that, but the Aggies scored the next seven points to make it 55-49. The Aggies were up by seven soon after that when they were called for a technical after a foul and Ulis made all four free throws to cut the lead to 59-55 with 11 minutes remaining.

Ulis made it six points in a row when he hit a layup to get Kentucky within two.

The Aggies got a pregame pep talk from Super Bowl MVP and former Texas A&M football star Von Miller, who stayed for the game and cheered the winning basket with the rest of the frenzied crowd.

"I just told them about taking advantage of opportunities," Miller said. "Same thing that I would tell my teammates I told them. We've been working all this time, putting in all the work for this one moment, let's take advantage of it."

Jones thought Miller's words were a good way to get things going.

"He gave us an extra boost of motivation to go and win that game," he said.

Kentucky: Murray, who made four 3s on Saturday, has hit at least one in every game this season. ... Derek Willis sprained his right ankle midway through the second half. He appeared to be in a lot of pain and was helped off the court and immediately taken into the locker room. ... Ulis had at least four assists for a school-record 21st straight game.

Texas A&M: The Aggies reached 20 wins for the 15th time in school history and ninth time in 12 seasons. ... The Aggies had 22 second-chance points to 11 by Kentucky.