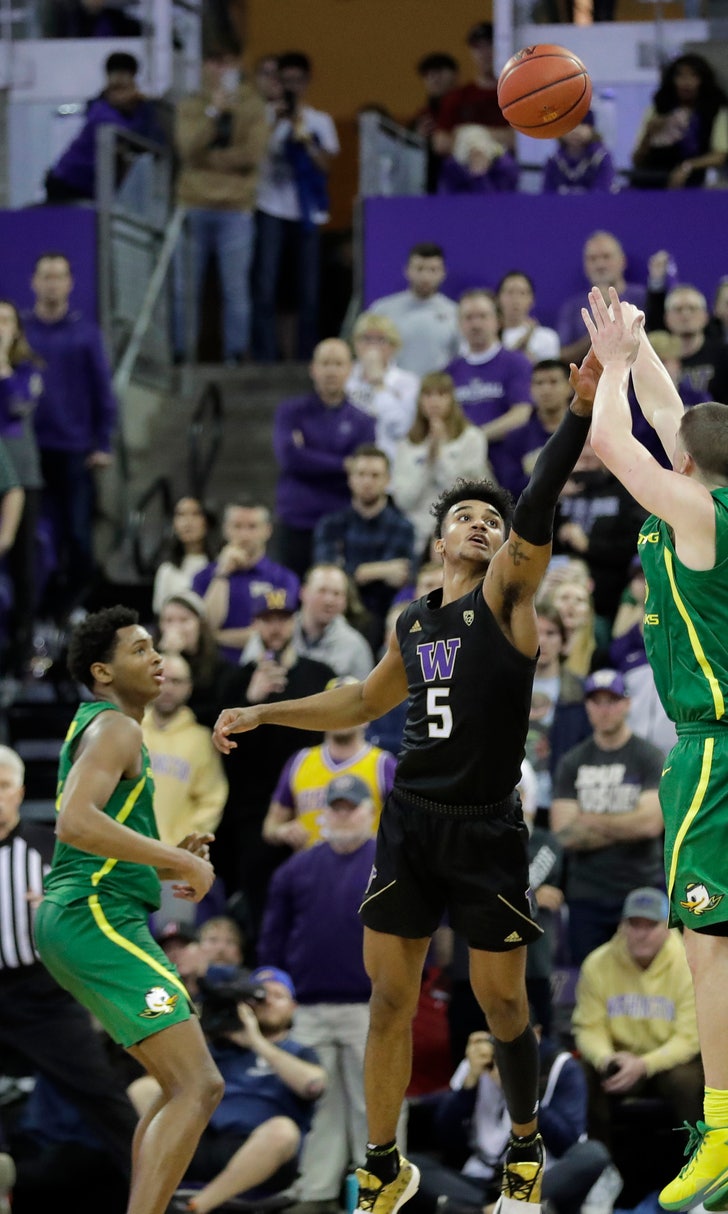 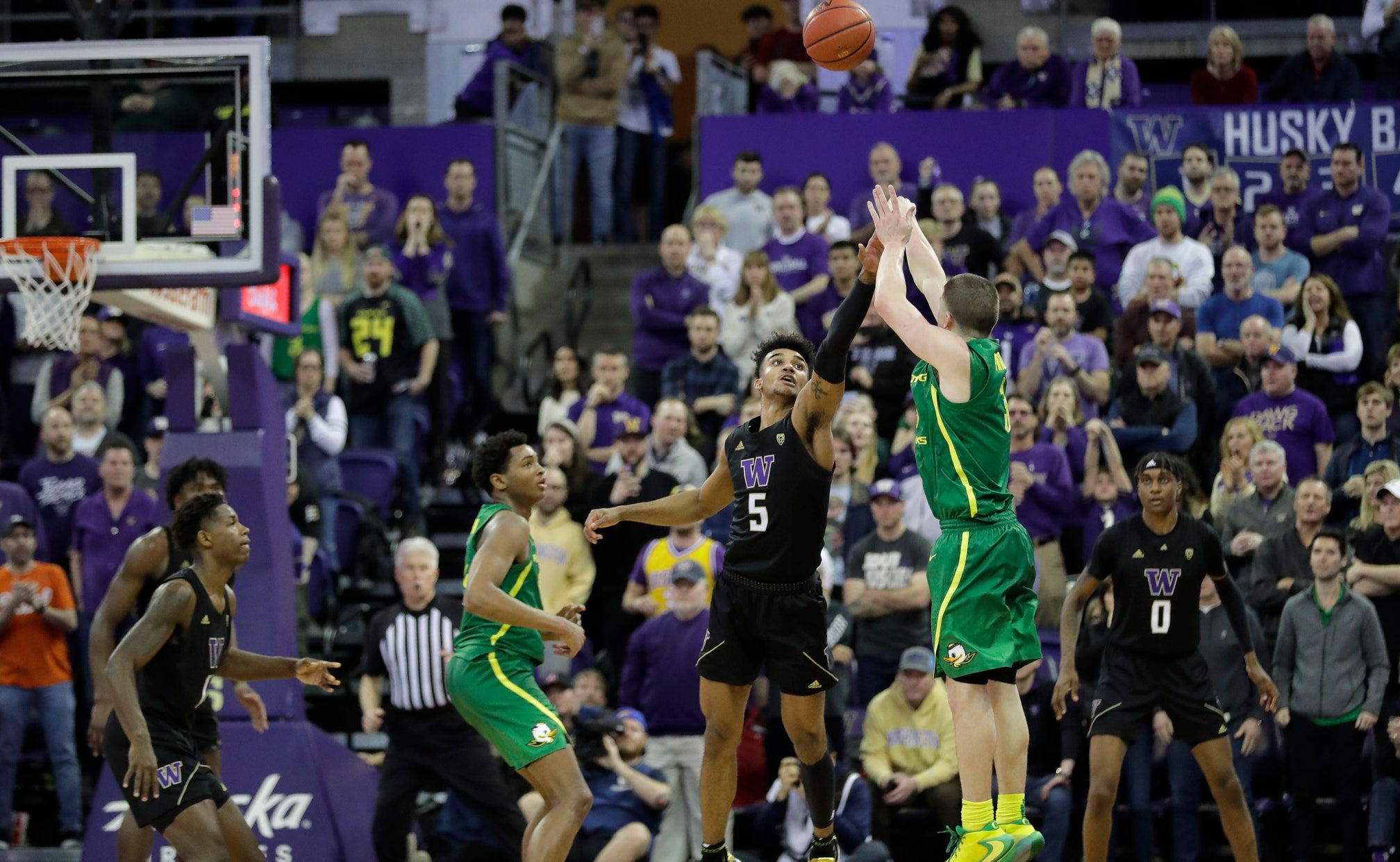 Pritchard's late 3 lifts No. 8 Oregon past Washington in OT

SEATTLE (AP) — All Payton Pritchard needed was a bit of separation. If he found it, the shot was going up no matter how tough the defending or difficult the attempt.

In this case, it was from around 30 feet and the capper to another big second-half rally from No. 8 Oregon.

“They can put the blame on me. I can take all the criticism, but I will be right there to take that last shot, take that pass, make that play whether it goes good or bad," Pritchard said.

Pritchard hit his sixth 3-pointer of the game with 3.4 seconds left in overtime and Oregon rallied from a 16-point second-half deficit to stun Washington 64-61 on Saturday.

Pritchard was the extent of Oregon's offense, finishing with 22 points on 7-of-16 shooting. He hit a floater with 1:08 left to give Oregon the lead and provided the winning 3-pointer despite tough defense from Washington's Jamal Bey. Pritchard was able to get just enough space to get the shot clear before the shot clock expired.

The Ducks rallied from 19 down to beat Seton Hall earlier this season. But this one felt a bit sweeter getting the better of one of their rivals.

“I don't think the length really bothers me. If you don't have a hand up I'm going to let it fly,” Pritchard said.

“If you don't get started right, you've got to keep battling," Oregon coach Dana Altman said. "I was really disappointed Thursday night. We didn't compete. We got outworked. ... I thought we played a lot harder. We didn't play well, but we did play a lot harder.”

Isaiah Stewart led Washington with 25 points and 19 rebounds. The freshman was dominant on the interior but didn't get the help he needed from others. Marcus Tsohonis had 12 of his 14 points in the first half, but the Huskies were 0 of 11 on 3-pointers in the second half and overtime, and 14 of 23 at the foul line.

Washington scored just 24 points in the second half and overtime combined.

“It was like he was going to will us to the game,” Washington coach Mike Hopkins said of Stewart. “He's just special. ... I wish we could have got that one for him today.”

Stewart opened overtime with a baseline reverse, but it turned out to be Washington's only basket of the extra period.

Lawson scored in the lane with 2:10 left and Pritchard followed with a runner to give Oregon a 61-59 lead, its first since it was 9-7 in the opening minutes. Stewart hit a pair of free throws to tie the game with 49 seconds left. Pritchard forced another deep 3-pointer and missed, but Chris Duarte got the offensive rebound and Pritchard didn't miss given a second opportunity.

Washington led by 12 at halftime after perhaps its best first half of the season. The Huskies led 48-32 with 10:22 remaining in regulation after a pair of free throws by Stewart. Oregon then went on a 15-2 run to get back into the game, triggered by a change in its defense. The Ducks went to a full-court press and it flustered the Huskies. Washington scored just eight points the rest of regulation.

Meanwhile, Pritchard was the catalyst at the offensive end. He hit Oregon’s first 3-pointer of the second half to get the Ducks within 50-45 and then left a perfect pass for Lawson’s dunk to pull them within 50-47 with 4:26 left.

Pritchard later hit a 3 from about 35 feet with 1:08 left to pull Oregon even at 54. Stewart hit a pair of free throws, but Shakur Juiston scored underneath for the Ducks with 17.8 left to tie the game at 56.

Washington's final possession was rushed and Jamal Bey's 3-pointer at the buzzer hit the back rim.

“The press changed the tempo of the game. ... Got them on their heels a little bit,” Altman said.

Washington: The Huskies got Jaden McDaniels back in the lineup after missing Thursday's win over Oregon State with an ankle injury. McDaniels struggled with his shot, hitting 1 of 9 from the field, and finished with five points.

Oregon: The Ducks return home to host USC next Thursday.

Washington: The Huskies travel to Utah next Thursday.