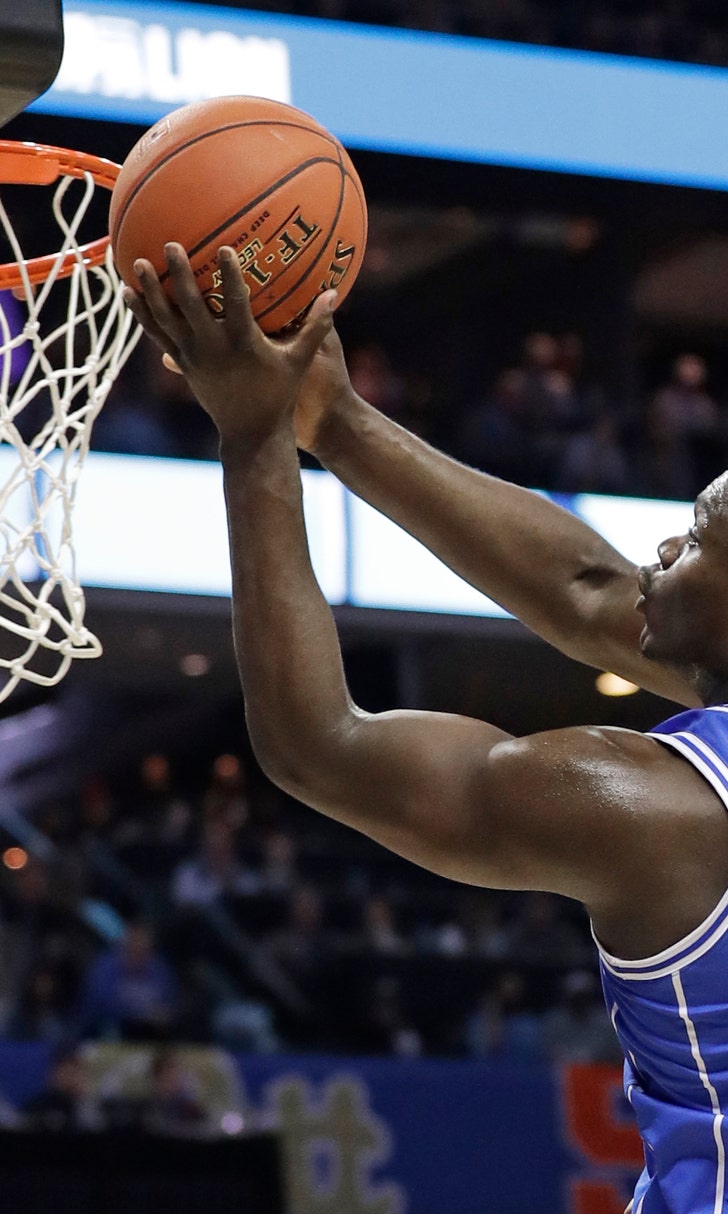 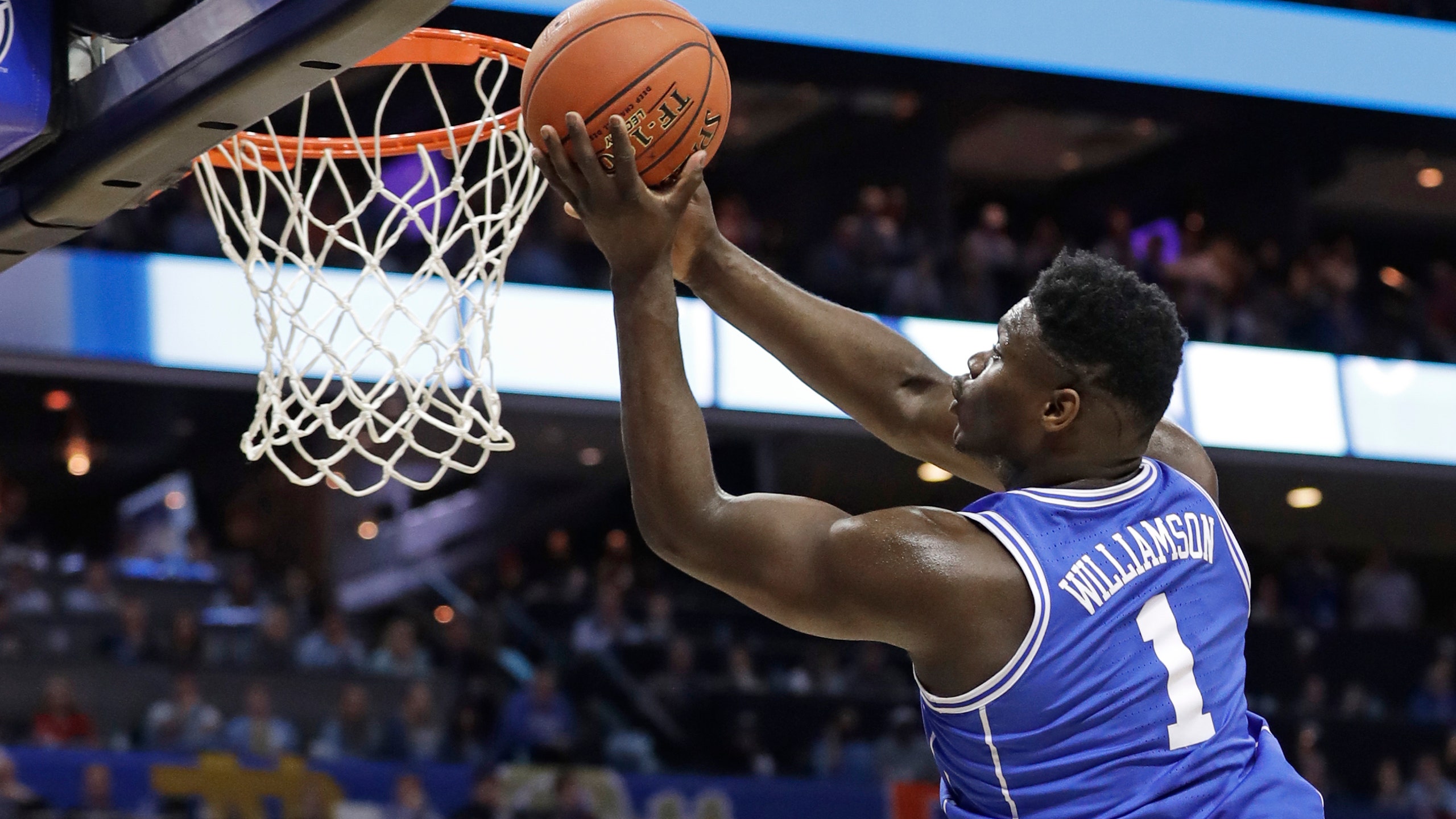 CHARLOTTE, N.C. (AP) — Zion Williamson didn't hesitate when he saw his shot for the lead coming off the rim late in a tense game with Duke's fierce rival. He bounced right back up in traffic for the kind of play that only he can make with his athleticism and size.

Williamson tipped in his own miss to put the fifth-ranked Blue Devils ahead for good, and Duke survived a final-play shot to beat the third-ranked Tar Heels 74-73 on Friday night in the Atlantic Coast Conference Tournament semifinals.

"That is just my competitive spirit," Williamson said of the tip-in. "So when I saw it miss, my instinct was to get the rebound and go back up, but I realized I could just tip it in. It went my way."

Williamson— who barely played in one regular-season loss to UNC and not at all in the second due to a knee sprain — finished with 31 points and 11 rebounds in his second game back for the Blue Devils (28-5). And it came with Duke facing the prospect of losing three times in a season to UNC (27-6) for the first time in 43 years.

"You don't want to lose to a team three times in a row," Williamson said. "You just want to win."

Williamson has been the talk of college basketball all year with his high-flying dunks and athleticism in a nimble 6-foot-7, 285-pound frame. He came through in a huge moment Friday, prompting UNC coach Roy Williams to say Williamson "put on his Superman jersey again and was incredible."

"It's such a blend of strength and power and quickness that we couldn't stop him getting the ball inside and going to the basket," Williams said.

That last tip-in helped Duke survive a classic that went down to the final play.

After freshman RJ Barrett missed two free throws with 12.4 seconds left, UNC pushed downcourt for a final possession. Coby White launched a contested long jumper against Tre Jones, but the ball bounced out as Nassir Little crashed the glass for a tip attempt as the horn sounded.

That sent Duke's bench into celebration and leaving a disappointed White crouching at midcourt in an arena filled with a buzzing instate crowd.

"I mean, it exceeded my expectations," Williamson said of getting his first full-game taste of the rivalry. "The crowd was into it, it was a back and forth game. What could be better?"

Cameron Johnson had 23 points for the Tar Heels, but he also missed a stepback 3-pointer for the lead that set up Barrett's missed free throws.

North Carolina led by 13 in the first half and 71-67 with less than 3 minutes left but couldn't hold on. The Tar Heels also went ahead 73-72 on Little's dunk with 48 seconds left, only to see Williamson respond by tipping in his own miss in the paint — battling through a crowd of white jerseys — to go back in front.

The Tar Heels shot just 40 percent, including 4 of 27 from 3-point range, against Duke's aggressive defense that played tough after UNC landed an early flurry for the lead.

Barrett finished with 15 points, eight rebounds and seven assists in a matchup of two heavyweights contending for top seeds in the NCAA Tournament. They both looked the part, too — down to Duke's final punch to advance.

"These two guys have an amazing will to win," Duke coach Mike Krzyzewski said of Williamson and Barrett, "and it makes us coaches look a lot better."

Duke: This tournament has largely been about Williamson's return from the injury that had sidelined him for nearly six full games, and what it means for the Blue Devils going forward. He had 29 points on 13-for-13 shooting — the best performance without a miss in the event's 66-year history — in the quarterfinal win against Syracuse. Friday was another sign that Duke, with Williamson back, is closer to being the version that spent a national-best seven weeks at No. 1 in the AP Top 25 this season.

UNC: The Tar Heels had claimed their first regular-season sweep of the Blue Devils since 2009, a year that ended with Williams claiming his second NCAA championship. They were trying to beat Duke three times in a season for the first time since 1976, though Williamson's almost complete absence had left a bit of a question how they might respond against Duke once he returned. The Tar Heels proved they're on level footing regardless.

"He's a great player and he definitely adds something to their team," Johnson said, "but that wasn't really the focus for us this game."

The Blue Devils also got sparks from spot-duty reserves like Jordan Goldwire and Antonio Vrankovic, with Goldwire playing more than 27 minutes to provide energy and defensive help when Johnson got hot early. Javin DeLaurier's work on the boards (six rebounds) kept Duke in it early as UNC was in full sprint by the opening tip.

Duke: The Blue Devils advanced to the championship game against 12th-ranked Florida State. The Seminoles upset No. 2 Virginia in the first semifinal.

UNC: The Tar Heels are headed to the NCAA Tournament, though it's unclear whether they've done enough to secure a No. 1 seed.

Bracketology: Illini Swipe Ohio State's 1-Seed
Ohio State's loss is Illinois' gain, as the Illini slot in as a 1-seed in Mike DeCourcy's latest edition of Bracketology.
9 hours ago

What You Need to Know: Clemson vs. Miami
Can No. 7 Miami actually challenge No. 1 Clemson in Saturday's high-stakes ACC matchup?
October 9, 2020
those were the latest stories
Want to see more?
View All Stories
Fox Sports™ and © 2021 Fox Media LLC and Fox Sports Interactive Media, LLC. All rights reserved. Use of this website (including any and all parts and components) constitutes your acceptance of these Terms of Use and Updated Privacy Policy. Advertising Choices. Do Not Sell my Personal Info