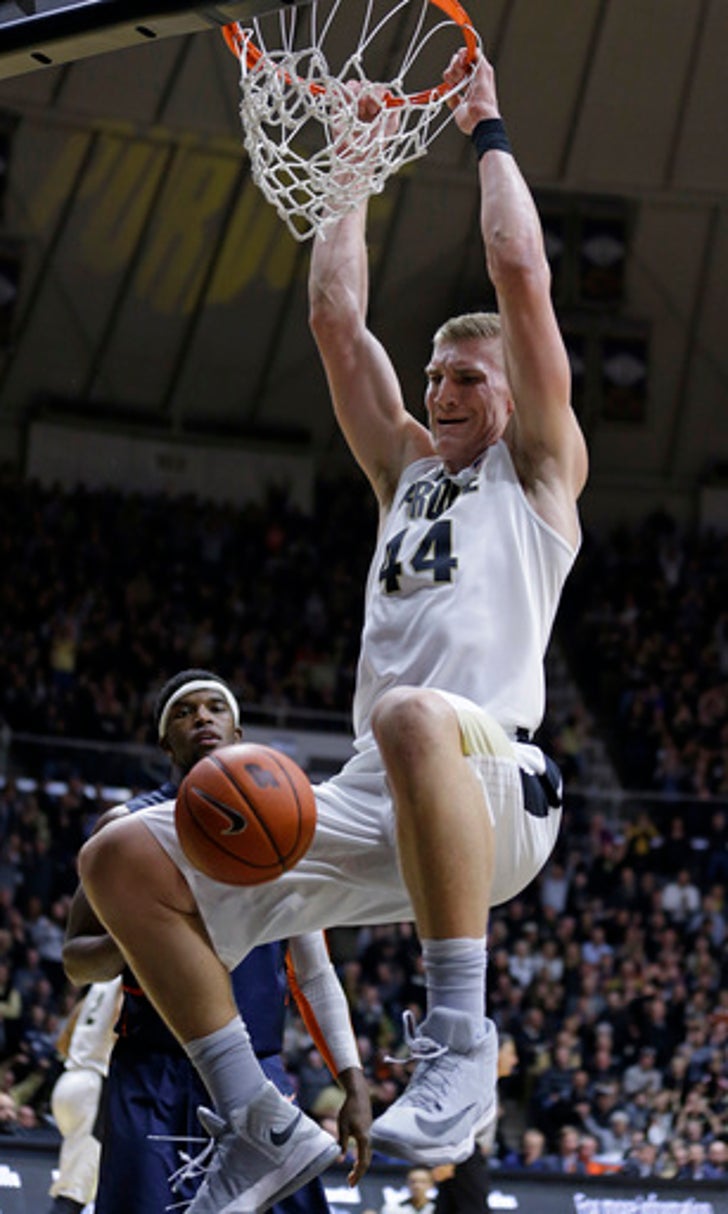 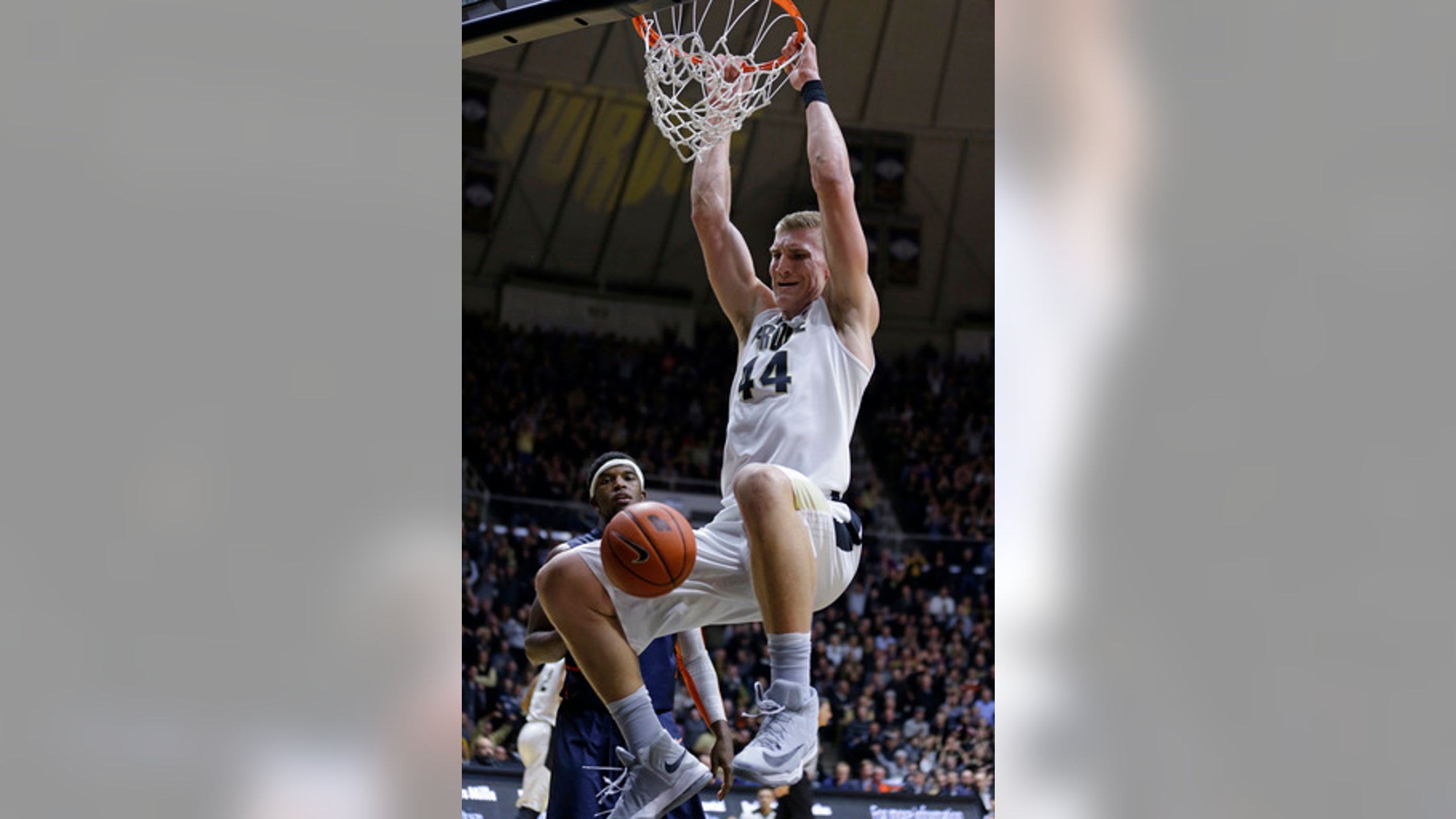 WEST LAFAYETTE, Ind. (AP) When Caleb Swanigan and Isaac Haas are in sync, it's difficult trying to name a better power forward-center combination in college basketball.

No. 21 Purdue's two interior players certainly were in sync on Tuesday night against outmanned Illinois.

Haas had 24 points and six rebounds, and power forward Swanigan added 22 points and 10 rebounds in the Boilermakers' dominating 91-68 victory.

Haas scored 13 points in the second half when the Boilermakers (15-4, 4-2 Big Ten) led by as many as 27. Swanigan had a four-point first half but was almost unstoppable during the second half, accounting for 18 points and five rebounds.

''It was Illinois' game plan not to double us,'' Swanigan said. ''You could hear their coaches yelling to them to pressure the ball. That was their game plan, and we had success with it.''

''We have to have balance, and we did that tonight,'' Purdue coach Matt Painter said. ''When Isaac got the ball deep like he did tonight, that's hard to stop. When Isaac is good and efficient, it really puts the other team in a bind.''

Illinois (12-7, 2-4) got 15 points from Maverick Morgan and 12 from Malcolm Hill but had no answer for the Boilermakers' two post players, each of whom had his way around the basket.

With this victory, Purdue leads the all-time series with Illinois, 100-87.

''With that team, you kind of have to pick your poison,'' Illinois coach John Groce said. ''They have two great post players, and then they surround them with good shooters. We let them get loose from 3 early, and the 3-point line got them out front and eventually into a double-digit lead.''

Haas was grateful for the 3-point help.

''I don't think the 3-point success made the game easy, but it gave us confidence and definitely let us get our heads up,'' Haas said. ''It wasn't like we were taking contested 1-on-1 shots. We were moving the ball and getting open looks.''

Carsen Edwards had 12 first-half points for Purdue, and Haas had 11. The two were a combined 9 of 10 from the field before halftime. The Boilermakers outrebounded Illinois 20-13 during the opening 20 minutes, although they did not get a single offensive rebound.

Illinois: The Illini never recovered from the early 19-5 deficit and fell to 0-4 in games against Top 25 competition. Illinois had trouble coping with Purdue's size and watched as the Boilermakers made five 3-pointers during the first 7 minutes. If Illinois loses Saturday at Michigan, it will be 2-5 in the Big Ten.

Purdue: As the Boilermakers have done every time after a regular-season loss in the past two seasons, they won the next game, getting a nice balance of perimeter play from Carsen Edwards and Haas.

With 22 points and 10 rebounds, Swanigan has nine double-doubles in the past 10 games, missing only this past Thursday with 17 and eight in an 83-78 loss at Iowa.

If the 21st-ranked Boilermakers beat Penn State on Saturday in Mackey Arena and improve to 16-4, 5-2, chances are solid that they will move up a bit in the AP Top 25.

Including Tuesday's loss, Illinois is 0-3 in Big Ten road games, losing by 25 at Maryland, by 16 at Indiana and by 23 at Purdue.

''It's a lot about being inconsistent,'' Groce said.

Illinois: The Illini travel to Ann Arbor on Saturday to play Michigan.

Purdue: The Boilermakers are at home again Saturday for a game with Penn State.

A crowded pack
Huge wins by Baylor and Illinois on Super Tuesday proved they might be up to the task of knocking off No. 1 Gonzaga in March.
6 hours ago

Playing the Field
If Gonzaga and Baylor aren't the best bets to win the NCAA title, who is? Jason McIntyre shares his five favorites.
4 days ago
those were the latest stories
Want to see more?
View All Stories
Fox Sports™ and © 2021 Fox Media LLC and Fox Sports Interactive Media, LLC. All rights reserved. Use of this website (including any and all parts and components) constitutes your acceptance of these Terms of Use and Updated Privacy Policy. Advertising Choices. Do Not Sell my Personal Info