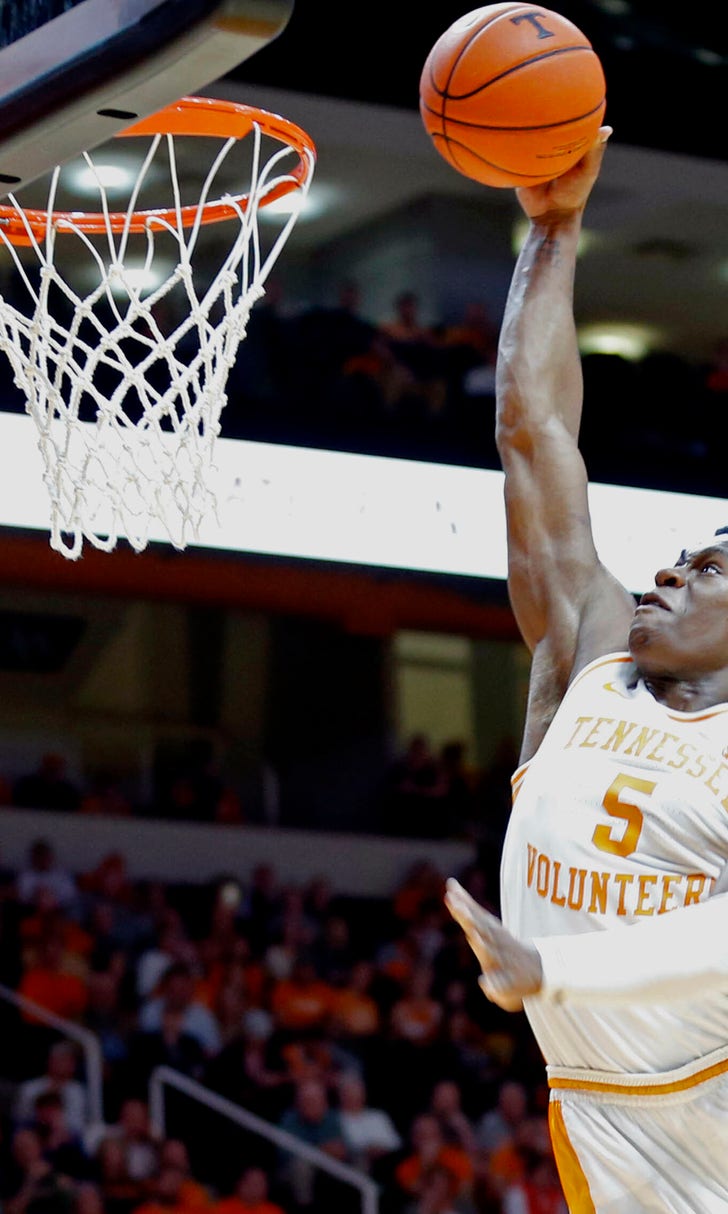 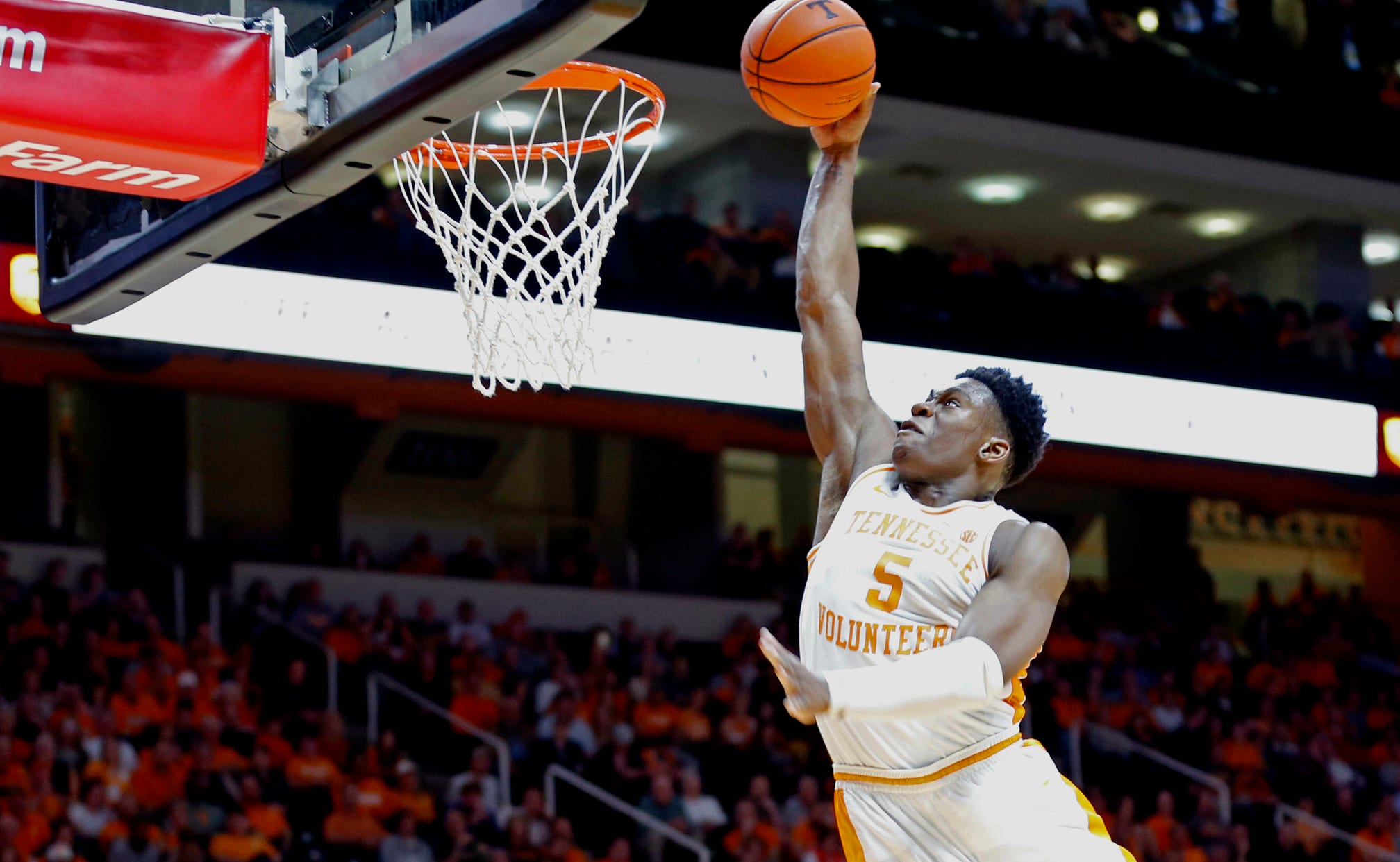 Barnes' 2009-10 Texas team won its first 17 games before stumbling down the stretch to finish 24-10 with a first-round NCAA Tournament loss.

Jordan Bowden had 12 points and Jordan Bone added 11 for the Volunteers. Bone also had seven assists.

Javon Pickett scored 12 points, Jordan Geist had 11 and Xavier Pinson added 10 for Missouri, which lost for the fourth time in the last five games.

They overcame some shaky early shooting by shooting 63 percent after halftime to claim their sixth straight win, and they will be no worse than tied for first in the league standings when they visit No. 3 Virginia on Saturday night.

Jordan Chatman scored 16 points while North Carolina native Ky Bowman finished with 11 — he averages 20.8 — on 5-of-17 shooting while facing constant pressure from Jones. BC (11-10, 2-7) gave Duke fits for a half before fading down the stretch of its third straight loss.

The Wildcats (19-3, 8-1 Southeastern Conference) shot just 41 percent but held the Gamecocks to just 28 percent in the second half and 36 percent overall.

Washington fell short of his fourth consecutive double-double but posted his fourth 20-point game in the past five. Tyler Herro, Reid Travis each added 11 points for the Wildcats.

The Wildcats stayed within a game of the conference lead and improved to 28-2 at home against the Gamecocks (11-11, 6-3).

A.J. Lawson and Tre Campbell each had 12 points for South Carolina.

Zavier Simpson added 14 points, seven assists and seven rebounds as the Wolverines (21-2, 10-2 Big Ten) bounced back from a dreadful performance in a loss to Iowa to remain unbeaten in 11 all-games against the Scarlet Knights (11-11, 4-8).

Jordan Poole added 15 points and Charles Matthews had 11 in giving coach John Beilein his 121st win in the conference for Michigan, a school record.

Eugene Omoruyi, who spent a year in high school with Brazdekis in Ontario, Canada, had 21 to lead Rutgers.

Freshman Coby White added 21 points for the Tar Heels (18-4, 8-1 Atlantic Coast Conference), who swept the regular-season set with their nearby rival for the 12th time in 16 seasons under Hall of Fame coach Roy Williams.

UNC was in control all night, shooting 56 percent while dominating the glass and repeatedly getting to the line.

Braxton Beverly scored 17 points for the Wolfpack (16-7, 4-6), who were coming off a woeful 24-point showing in Saturday's loss to Virginia Tech.

MILWAUKEE (AP) — Shamorie Ponds scored 28 points, including a go-ahead layup with 16 seconds left, to give St. John's the victory over Marquette.

The loss ended an eight-game winning streak for the Golden Eagles and was their first defeat at their new home this season after 14 victories.

Sneed finished with 14 points and Dean Wade added 12 for the Wildcats (17-5, 7-2), who not only maintained their place atop the Big 12 but dealt another tough road loss to the Jayhawks.

Dedric Lawson led the Jayhawks with 18 points and nine rebounds, but the league's leading scorer was just 6 of 15 from the floor.

Florida State (17-5, 5-4 Atlantic Coast Conference) won its fourth straight after starting conference play with four losses in five games, including consecutive setbacks on the road to Boston College and Pittsburgh.

Syracuse (16-7, 7-3 ACC) entered the game 2-3 against ranked teams, having beaten two on the road. But the Orange fell far behind early against the Seminoles, rallied to within a point in the second half and then fizzled at the end.

Tyus Battle led Syracuse with 23 points, Elijah Hughes had 17 and Oshae Brissett had 16 points and 12 rebounds.