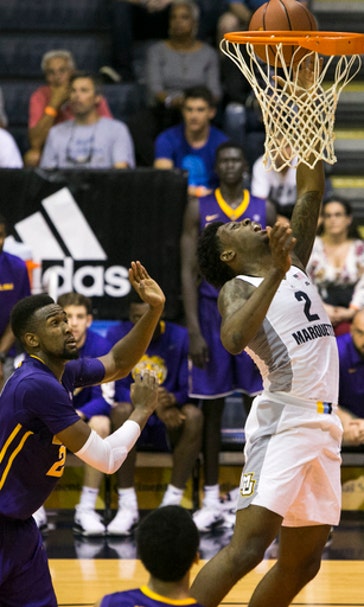 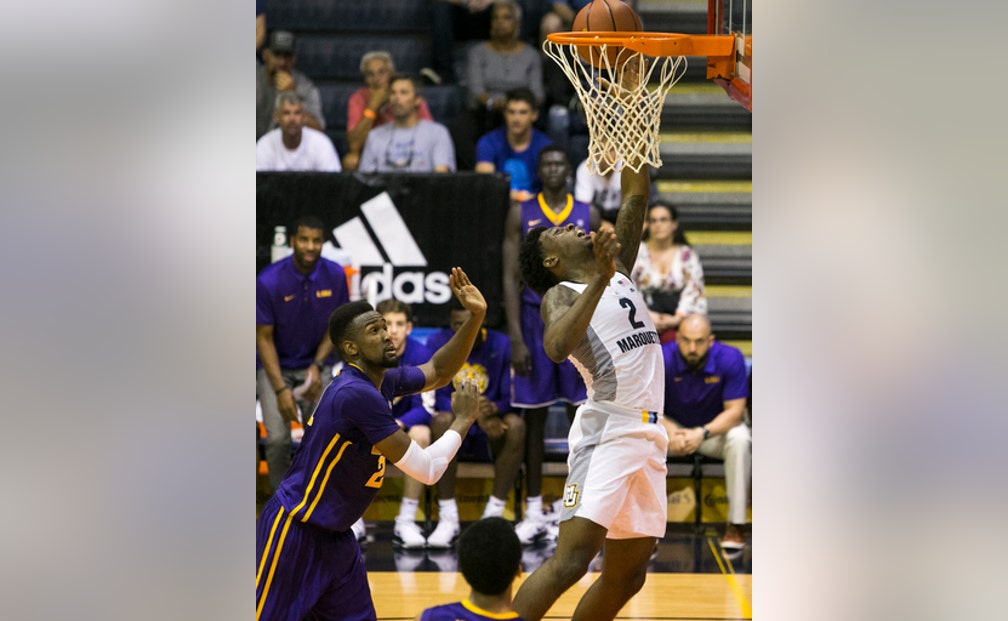 LAHAINA, Hawaii (AP) A lopsided loss to Wichita State in the Maui Invitational semifinals hurt Marquette. The Golden Eagles thought they could be competitive with one of the nation's top teams and didn't measure up.

The key was to regroup, find a way to win the third-place game and go home with two wins instead of one. A big second half allowed them to do that.

Andrew Rowsey scored 24 of his 30 points in the second half and Marquette pulled away for a 94-84 victory over LSU for third in the Maui Invitational on Wednesday.

''Obviously, every win's important, but for us to bounce back after a difficult and very hard-fought game against Wichita State, for our kids to show the toughness they did (was big),'' Marquette coach Steve Wojciechowski said.

Marquette (3-2) had trouble getting Rowsey or Markus Howard open looks in the first half, but Sam Hauser picked up the slack, scoring 18 of his 20 points in the opening 20 minutes.

The Golden Eagles built a big early lead behind Hauser, watched the Tigers rally by halftime and started stretching the lead back behind Rowsey, who hit all 16 of his free-throw attempts.

Freshman Tremont Waters kept LSU (3-2) in it almost singlehandedly, scoring 39 points on 13-of-22 shooting while dishing out four assists. The Tigers allowed all three opponents to shoot at least 50 percent to leave Maui 1-2.

''We confirmed that we can't guard anybody. That's the No. 1 thing we did,'' LSU coach Will Wade said. ''We thought that going in, but we certainly confirmed that out here.''

Earlier this week, LSU outlasted Michigan for a two-point victory before getting run out of the tiny Lahaina Civic Center by No. 13 Notre Dame in the semifinals.

Marquette rolled over VCU in its opener behind Rowsey and Howard, who combined for 42 points. They combined for 51 points against No. 6 Wichita State, but the Shockers were too good at both ends in an 80-66 win in the semifinals.

With LSU keying on those two in the third-place game, Hauser took over.

The 6-foot-8 sophomore repeatedly slipped into gaps in LSU's defense and his teammates found him. Hauser hit five straight shots - four 3s - to open the game and had 15 points in the first 6 minutes.

A hot Hauser sparked Marquette's offense, leading the Golden Eagles to a 13-point lead midway through the first half.

Waters brought the Tigers back, confidently stroking in 3-pointers and driving to the basket. LSU's freshman point guard had 22 points by halftime, hitting 4 of 6 from the 3-point arc to pull within 46-44.

Marquette maintained a small cushion through the first part of the second half and started to run away with it with about 8 minutes left. The Golden Eagles closed in around the Tigers on defense and went on an 11-0 run to go up 75-61.

Rowsey, quiet to that point, hit a 3-pointer during the run and later hit three free throws after getting yet another defender to bite on an up-fake shooting a 3. He added a long 3-pointer over the long arm of Duop Reath to put the Golden Eagles up 15, staring down LSU's 6-foot-11 forward as they ran back.

''This was a terrific tournament and there are a lot of great teams,'' said Marquette's Sacar Anim, who had 12 points. ''It give is us a lot of confidence knowing we're 2-1. Although we fell short, third place is pretty good.''

Marquette has three dangerous scorers and trying to stop all of them will be difficult for any team facing the Golden Eagles.

Waters is emerging as a star for LSU, but he can't do it alone. The Tigers have questions on defense that need to be addressed, too.

Marquette Golden Eagles
share story
those were the latest stories
Want to see more?
View All Stories
Fox Sports™ and © 2020 Fox Media LLC and Fox Sports Interactive Media, LLC. All rights reserved. Use of this website (including any and all parts and components) constitutes your acceptance of these Terms of Use and Updated Privacy Policy . Advertising Choices . Do Not Sell my Personal Info