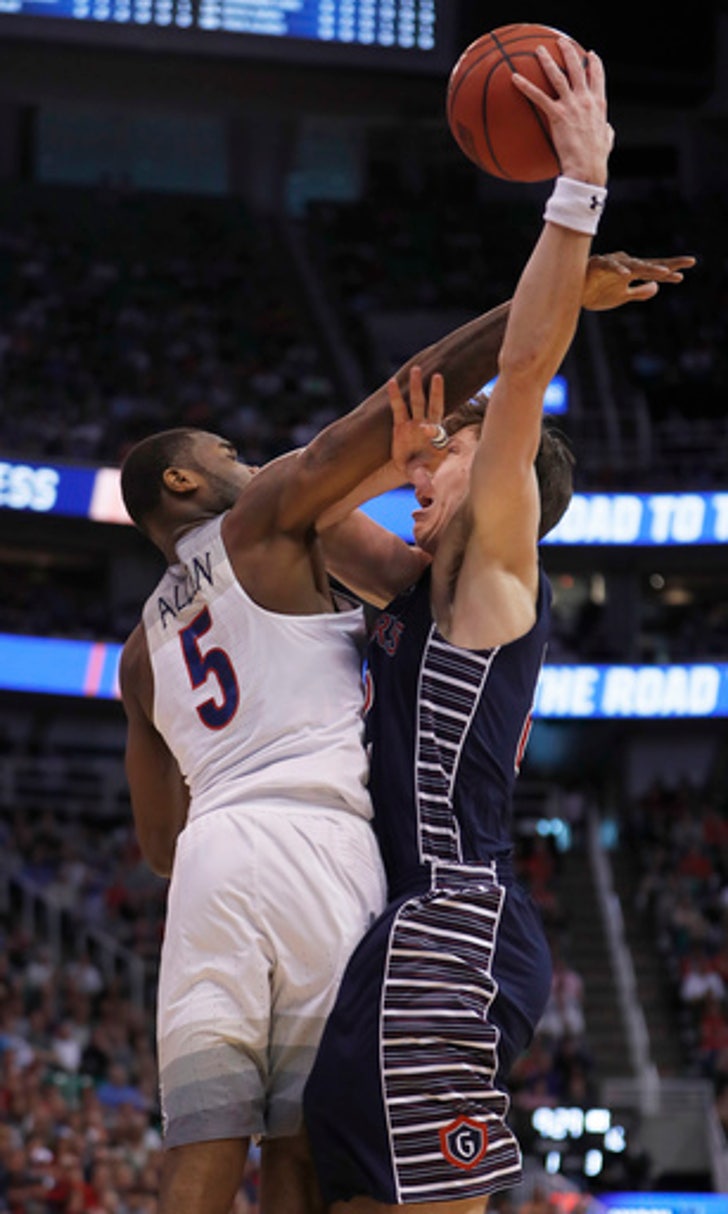 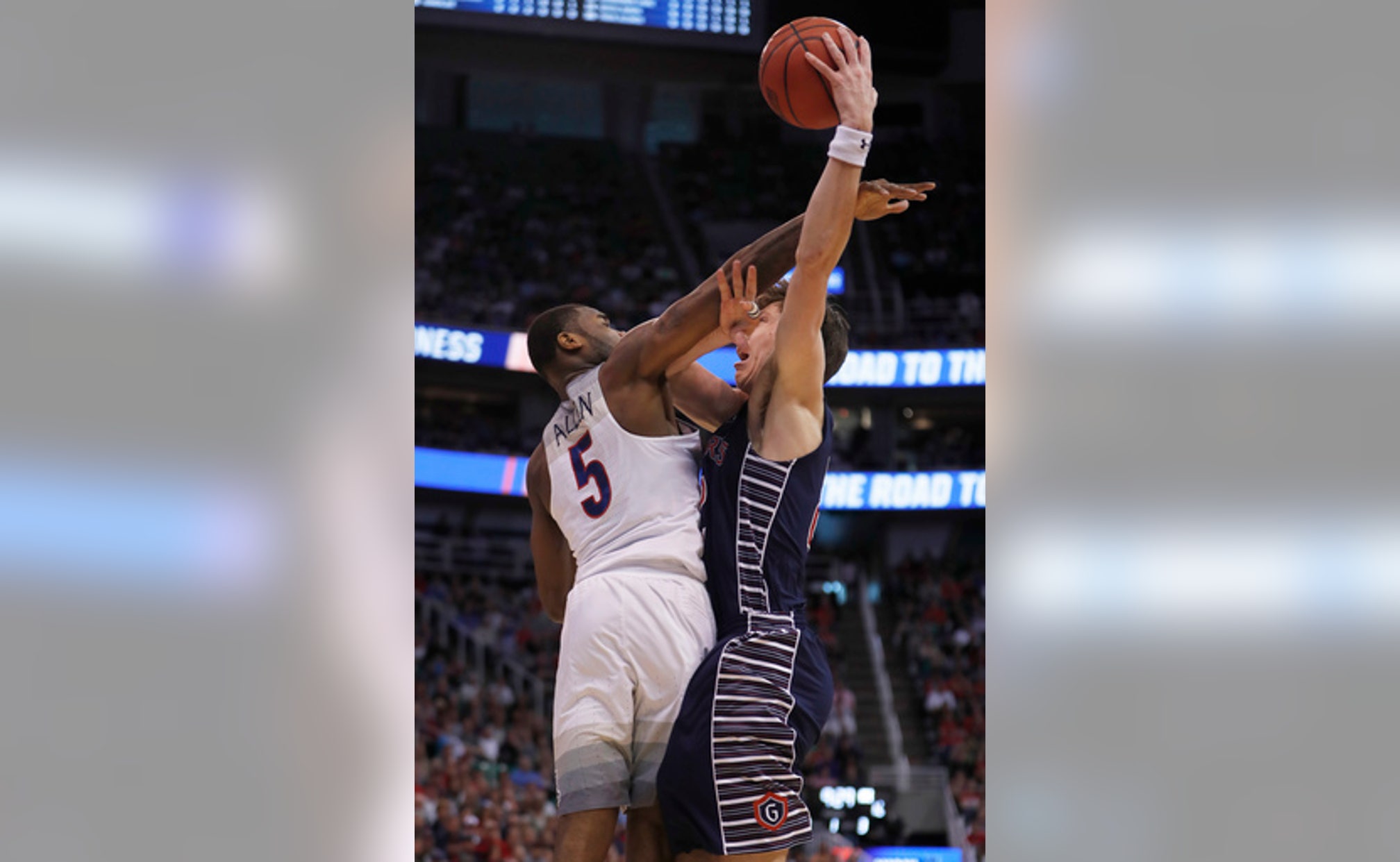 SALT LAKE CITY (AP) Arizona and Saint Mary's are no strangers after scrimmaging during the preseason three times in the last four years. So, the Wildcats weren't surprised when the Gaels punched them in the mouth early.

Lauri Markkanen and Allonzo Trier shined and No. 2-seeded Arizona rallied to defeat No. 7 Saint Mary's 69-60 on Saturday night and advance to the West Regional's Sweet 16.

The Wildcats were on the ropes in the first half, but found life in the second to pull away for the win.

''These guys really knew how Saint Mary's was,'' Arizona coach Sean Miller said. ''In a small way, (the scrimmages) really helped us tonight.

''Not until you're actually playing against them do you realize how physical they are, how good they are. ... I look at this as one of the great wins we've had in the tournament because of the team that we beat.''

The teams went back and forth in the second 20 minutes until Arizona went on an 11-2 run sparked by Trier, who took over the second half. He scored nine of those 11 points during the stretch with a dribble-drive layup, midrange jumpers and a 3-pointer. The run gave the Wildcats a 55-48 lead and Saint Mary's never led again.

Arizona shot 59.1 percent from the field in the second half.

''Our advantage was driving,'' Miller said. ''Our advantage eventually was able to get the ball inside. Getting the ball to the basket whether it be on drive or post catch, we delivered. We scored. We got fouled. That was the big difference.''

Markkanen finished with 16 points and 11 rebounds while Trier scored 14 points. Miller said Trier seemed to lose his confidence early, but was one of the biggest differences in the game once he got going.

Jock Landale battled with Markkanen and Arizona's bigs throughout and had his 17th double-double of the season with 19 points and 11 rebounds for the Gaels. However, he was held to just seven points after halftime. Teammate Calvin Hermanson added 14 points.

''Got a little more comfortable as the game went on,'' Markkanen said. ''I just tried to be as physical as I can and don't let (Landale) get the ball.''

Saint Mary's took a 30-29 lead into halftime as the Gaels controlled the tempo and locked down Arizona defensively for much of the half.

Saint Mary's used a 10-2 run started by a 3-pointer by Tanner Krebs to take a 24-14 lead. Everything was going wrong for the Wildcats as their top scorers were held in check and starting guard Rawle Alkins missed much of the half with a dislocated finger.

Nothing came easy for Arizona in the half court on offense and Saint Mary's kept it from getting out in transition and using its athleticism advantage.

Arizona found life late in the half and finished on a 15-6 run thanks to six points from Markkanen and a 3-pointer from Parker Jackson-Cartwright, the Wildcats lone 3 of the first half. They shot just 34.5 percent from the field in the first 20 minutes.

''It seemed like they started hitting some tough shots at the end,'' Hermanson said. ''We did a pretty good job on defense the first 10, 14 minutes or so.

''And then in the second half it seemed like they were a little more aggressive attacking the paint. We just have to do a better job of limiting that.''

Saint Mary's: The Gaels did what they wanted to do defensively. Arizona wants to run in transition and play with pace. Saint Mary's didn't allow either. But the effort just couldn't hold up in the second half and the Gaels lost in the second round for their third straight NCAA Tournament.

Arizona: The Wildcats had to work for this one. The offense was completely stymied in the first half, but Trier and Markkanen came to life in the second. A win is a win any way you get it for a team looking for its first Final Four under Miller.

Alkins headed to the locker room around the 10:00 minute mark of the first half with the finger injury. He returned late in the half with the index and middle fingers of his right hand heavily bandaged.

''It wasn't really painful because I like to think that I have a huge heart and I'll play through anything,'' Alkins said.

The Gaels shot just 5 for 21 from 3-point range after coming into the tournament shooting 39.9 percent from behind the arc.

''A big part of our game is shooting the ball from 3 and we didn't shoot it well enough,'' Saint Mary's coach Randy Bennett said.

Arizona will face 11th-seeded Xavier in the Sweet 16 on Thursday.