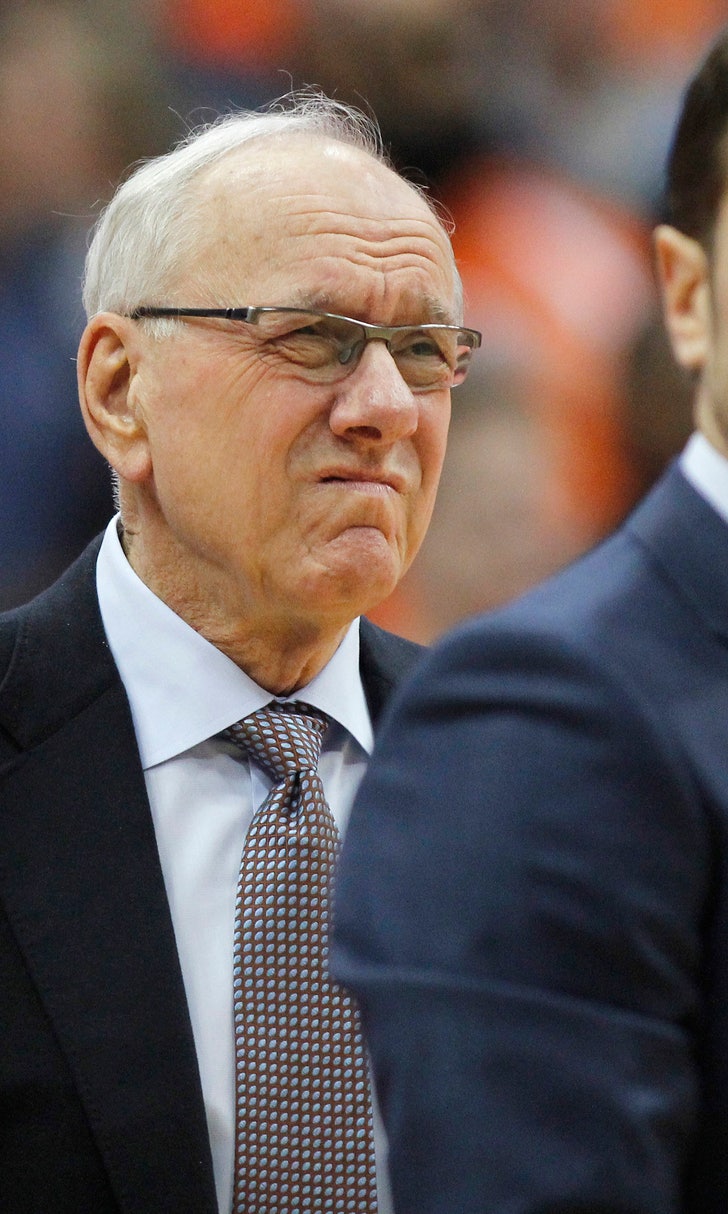 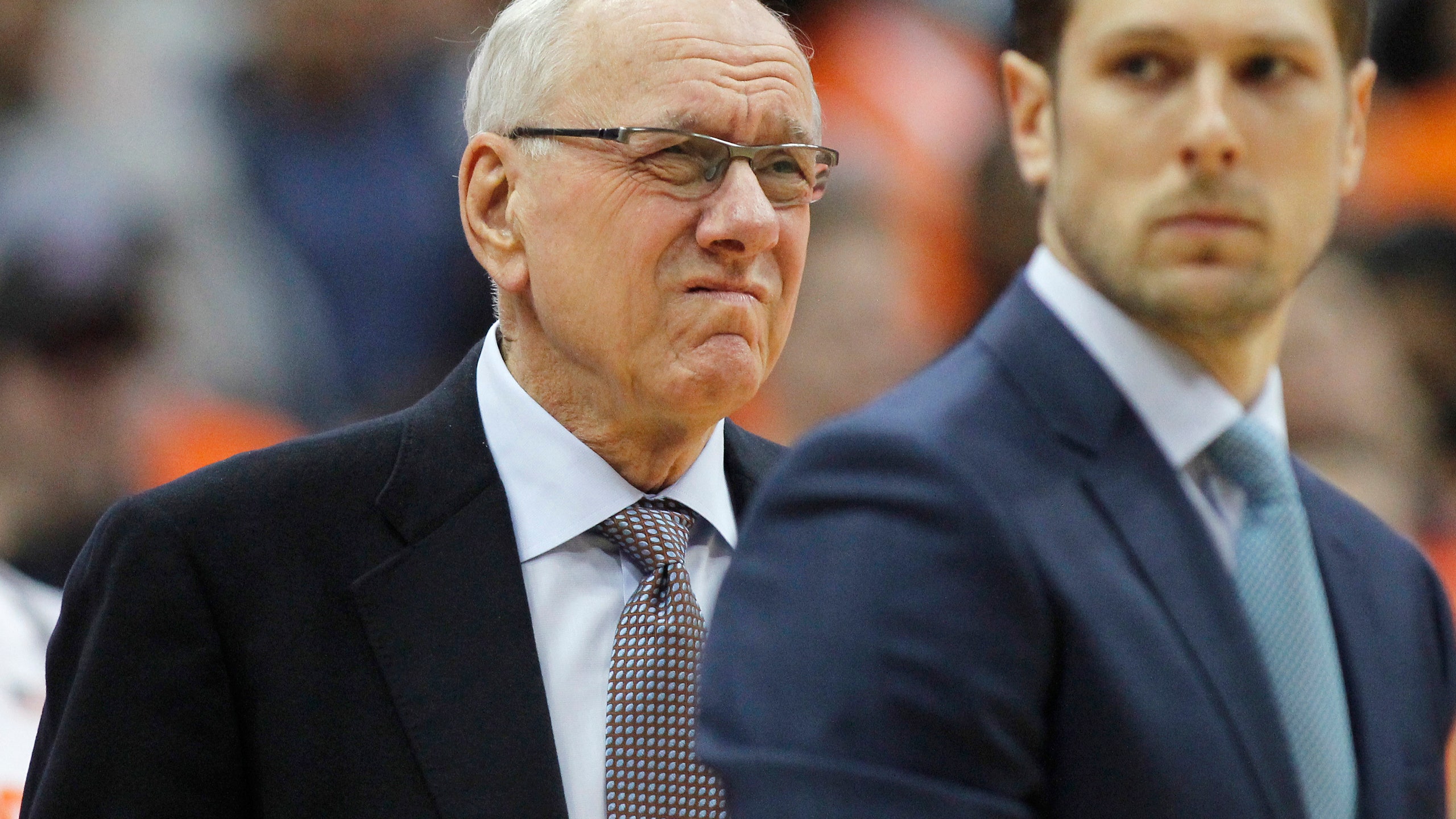 SYRACUSE, N.Y. (AP) — When it was over and the last of the deafening cheers of the record Carrier Dome crowd had stopped, Syracuse coach Jim Boeheim forgot about basketball for a poignant moment.

Three nights earlier, the 74-year-old Hall of Fame coach had been involved in an accident that took the life of 51-year-old Jorge Jimenez, and that was foremost on his mind. Talking about a tough 75-65 loss to top-ranked Duke on Saturday night would have to wait.

"First and foremost to the Jimenez family I want them to know how truly devastated I am for my involvement and the loss of a loved one," Boeheim read from a prepared statement. "The grief and pain his family is feeling at this time is, simply put, unimaginable. Juli, my family, and I are heartbroken. I love this community, and to see so many of my community members rally around the Jimenez family is a reminder of how special a community central New York is."

For Boeheim, who struck and killed Jimenez on a darkened highway that leads out of town, the game was his first public appearance since the accident. Boeheim, in his 43rd season as head coach at his alma mater, had addressed the team Thursday but did not take part in practice. Although he returned for practice Friday, he had not appeared in public until he made his way into the Carrier Dome to a big ovation from the crowd of 35,642.

Head down, Boeheim made his way to center court and acknowledged the crowd with a brief wave before giving Duke coach Mike Krzyzewski a heartfelt hug.

"That was such an incredible environment," Krzyzewski said. "The support the fans gave the team and the support they gave Jim was great and such an emotional time."

The accident happened after the Orange's 20-point victory over No. 18 Louisville. Police say Jimenez was a passenger in a car that apparently skidded out of control on a patch of ice and hit a guardrail. Police say Jimenez was trying to get to safety when he was struck by Boeheim's SUV. Boeheim had swerved to avoid the disabled car, which was resting perpendicular across two lanes.

Jimenez was taken to a hospital, where he was pronounced dead. Another man in the car suffered minor injuries. A moment of silence was observed before the game for Jimenez and his family.

Police say Boeheim has cooperated and sobriety tests administered to Boeheim and the unidentified driver of the other vehicle were negative for any signs of impairment. Police Chief Kenton T. Buckner said Thursday night there was "no reason to believe that there are criminal charges that will be coming for anyone."

Once the game started, it seemed like just another tilt featuring the two winningest coaches in NCAA Division I history, except for the massive crowd that made the dome's walls shake every time the Orange scored. The Blue Devils (24-3, 12-2) improved to 7-0 on the road in the Atlantic Coast Conference.

In the first game between the teams, the Orange (18-9, 9-5) pulled off the upset, 95-91 at Cameron Indoor Stadium, as Tyus Battle scored a season-high 32 points and Syracuse used its 2-3 zone defense to rattle Duke in overtime.

Swingman Cameron Reddish was out with an illness and point guard Tre Jones suffered a shoulder injury roughly 5 1/2 minutes in to put Duke down two starters in that one. It was a completely different team, just like it was on Saturday without injured freshman star Zion Williamson, who had a season-high 35 points in that first game.

Williamson watched from the bench as freshman forward RJ Barrett, who had a triple-double and double-double in Duke's previous two games, scored 30 points to help fill the void and Alex O'Connell had a career-high 20 in his first start of the season.

Tyus Battle led Syracuse with 16 points on 4-of-17 shooting, Elijah Hughes had 12, and Marek Dolezaj and Frank Howard had 10 apiece as the Orange hit only 1 of 11 3-pointers in the decisive second half.

"Our offense is really the difference," Boeheim said. "They're going to score points. They're a tremendous offensive team. If you can hold them in the 70s, that's a pretty good effort, but offensively we didn't get the movement we need to and we didn't make shots when we got them."

For freshman Orange guard Buddy Boeheim, the coach's youngest son, the whole night was a moment that forever will be etched in his mind."When he first came out, it was just a great moment for the community, a great moment for him," Buddy said. "It was just great having him there. You obviously want to win, but it's more than basketball sometimes."

The game set a record for an on-campus basketball game, eclipsing the mark of 34,446, twice against Duke.

Duke: Williamson is recovering from a sprained knee. Duke was crushed at home, 88-72, on Wednesday night by No. 8 North Carolina after Williamson was hurt on the game's first possession.

Syracuse: Just being with the players and coaching them will help Boeheim cope with the tragic accident as the season winds down.

Duke: At No. 20 Virginia Tech on Tuesday night.

Syracuse: At No. 8 North Carolina on Tuesday night.