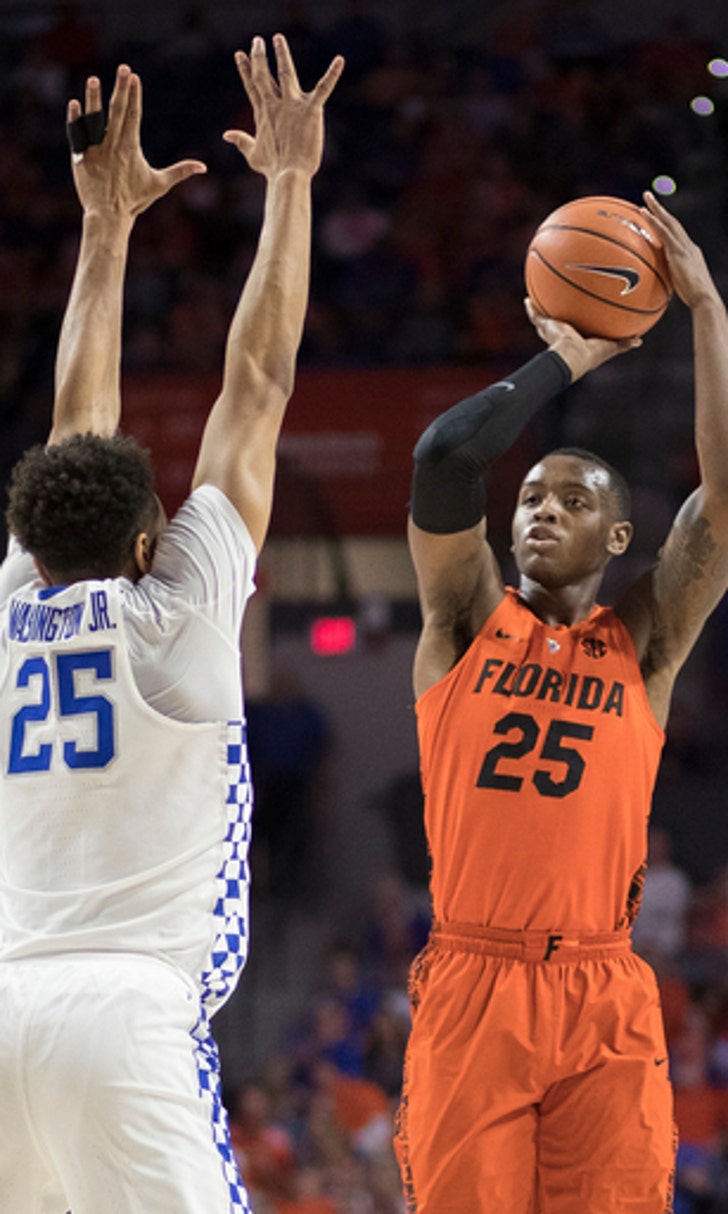 GAINESVILLE, Fla. (AP) With Kentucky rolling, Florida reeling and the lead dwindling, Jalen Hudson decided to do something about it.

His 3-pointer from the wing with 6:19 to play was a turning point - for both teams.

Hudson scored 22 points - highlighted by one that bounced around the rim several times and hit the backboard before falling through - and the Gators beat the No. 23 Wildcats 80-67 on Saturday, ending the Wildcats' four-game winning streak.

It was deflating for Kentucky, which used a matchup zone to trim a 23-point deficit to 65-56. It also was exactly the boost Florida needed.

The Gators (20-11, 11-7 SEC) won their third straight, swept Kentucky for the first time in four years and secured the No. 3 seed in next week's Southeastern Conference Tournament.

''We're playing our best basketball of the year, and I think the best way to continue doing so it to not rest on our laurels and not feel like we've got it all figured out,'' Florida coach Mike White said.

''We've got to handle success much better than we have at other times in this basketball season. We've got remain on edge and continue to understand who we are and what our deficiencies are and stay as connected as we've been lately.''

The Wildcats (21-10, 10-8) will be seeded fourth or fifth in the SEC Tournament depending on the outcome of the Arkansas-Missouri game later Saturday. No team seeded lower than third has won the SEC since it went to a 14-team format in 2013.

''If we play this way, we're not winning,'' Calipari said. ''This hopefully wakes us up and we go.''

The Wildcats entered Saturday as the league's hottest team, having won four straight while averaging 87.7 points a game. They looked like a shell of that team in Gainesville, giving up 16 points off turnovers and getting outscored in the paint and from behind the arc.

''We reverted,'' Calipari said, pointing to six assists and 13 turnovers. ''This is how we played a month ago.''

Florida played hard for the fourth straight outing and looked much more like the team ranked No. 5 in early December than the one that dropped six of eight in league play between Jan. 24 and Feb. 21.

Chiozza, one of three players recognized on '''Senior Day,'' broke the school's all-time assist record in the first half. It seemed to get the Gators going. Chiozza started to drive to the basket and then tossed the ball back out to Keith Stone, who drilled a 3 that made it 28-17 and prompted Calipari to call a timeout.

The Gators made their next seven shots, including a pair of 3s by Hudson, to push the lead to 17.

KeVaughn Allen, who had one of the best all-around games of his career, tacked on a 3-pointer at the first-half buzzer to make it 48-33 at the break. Allen finished with 11 points, seven rebounds and a career-high seven assists.

The Wildcats showed some life midway through the second half, but Hudson answered with his biggest basket of the game. Egor Koulechov followed with two free throws, and Stone put an exclamation point on the lopsided victory with a thunderous dunk that sent the home crowd into a frenzy.

Shai Gilgeous-Alexander led Kentucky with 17 points. Kevin Knox added 14 in the regular-season finale for both teams.

Kentucky: The Wildcats finished 4-6 on the road, not all that surprising since they have four freshmen and a sophomore in the starting lineup. Given the propensity of Big Blue Nation to travel, especially in the postseason, Kentucky should be surrounded by ''home'' crowds the rest of the season.

Florida: The Gators have seemingly found something just in time for the postseason, especially if they're able to build on wins against Auburn, Alabama and Kentucky.

Kentucky: Plays in the SEC Tournament either Thursday or Friday.