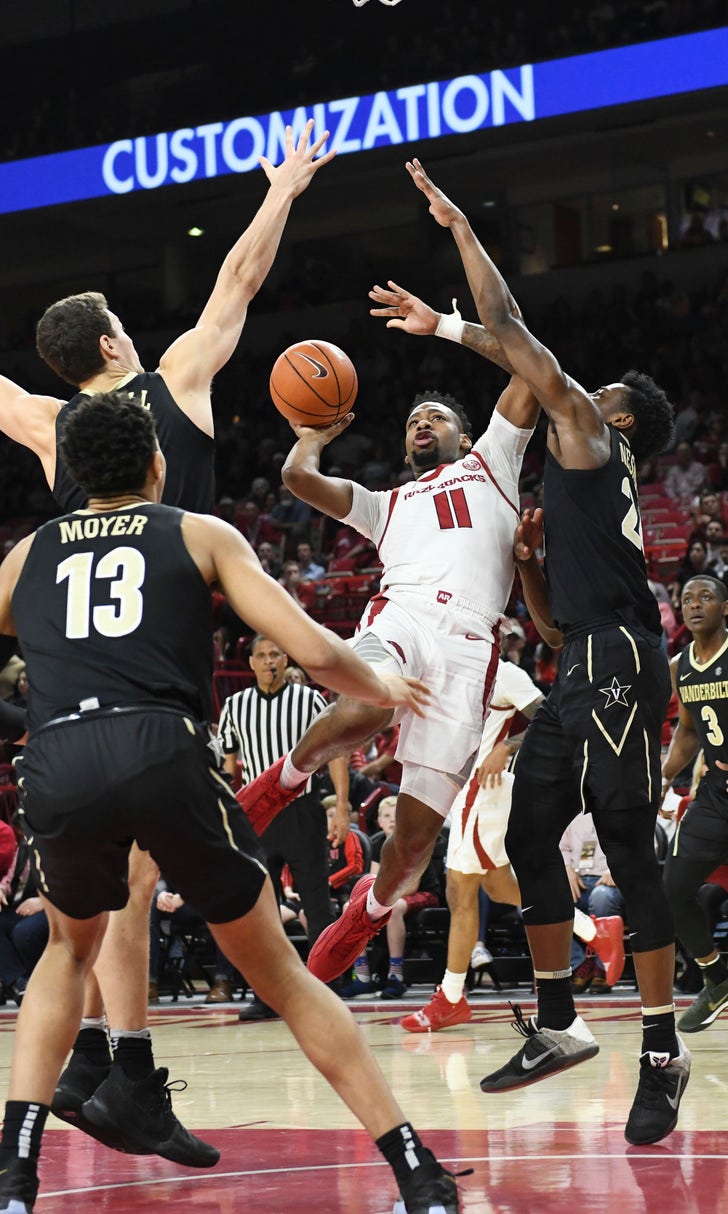 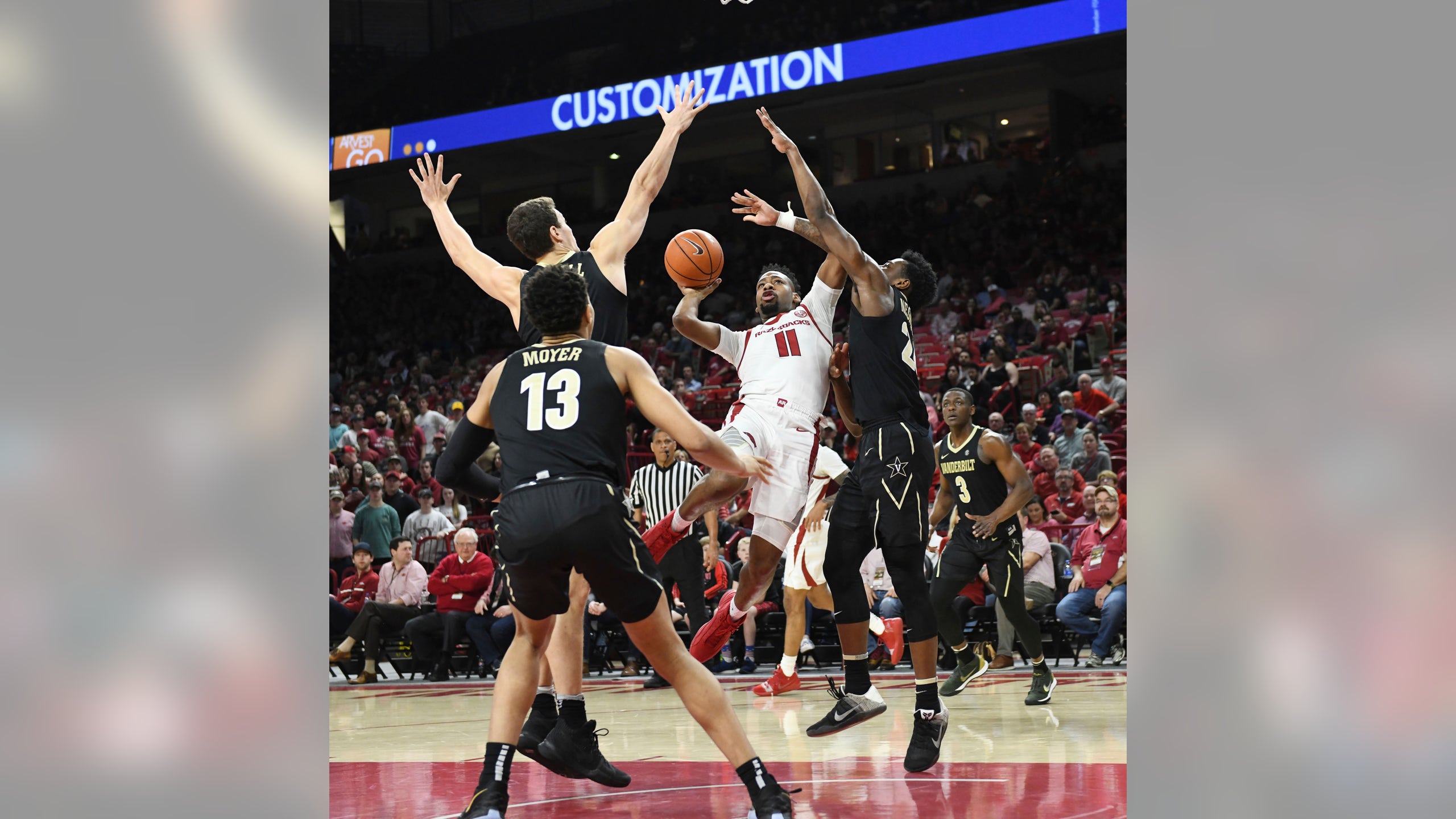 FAYETTEVILLE, Ark. (AP) — Daniel Gafford didn't exactly ooze with confidence when he stepped to the free-throw line this season.

The Arkansas sophomore post and likely first-round NBA Draft pick was shooting less than 60 percent from the foul line coming into Tuesday's SEC home game against Vanderbilt, so it was easy to see the Commodores' strategy of fouling the 6-foot-11 post when he got the basketball around the goal.

But Gafford was nearly perfect from the line in Arkansas' 69-66 win, their fourth straight SEC triumph, scoring a game-high 28 points as the Razorbacks almost squandered a second half lead.

"I've just been working real hard on my free throws," Gafford said of his 10-of-12 performance. "As you all can see, I haven't been hitting consecutive free throws down the stretch, so my mindset has been I want to get better at the free-throw line because I don't want teams to have the game plan of Hack-A-Dan. When that happens and I miss free throws, that's points that's not on the board for us. And we need those."

"Obviously Gafford is one of the best bigs in the country," Vanderbilt coach Bryce Drew said. "I think he is very undervalued nationally. He is a great rim-protector and his offensive game has improved. His free throws were 10 out of 12, which is way above his normal shooting percentage, so really credit him for carrying that load."

Arkansas finally got its offense going with under three minutes left in the first half as freshman Isaiah Joe hit four 3-pointers over the final 2:57 to pull the Razorbacks within 35-34 at halftime. Joe finished the night by hitting 6 triples and scoring 18 points.

Vanderbilt (9-13, 0-9), which has lost nine straight SEC games, led 28-18 in the first half, then fell behind by nine in the second half before Joe Toye started finding the mark from behind the arc.

Arkansas built a 52-43 lead with 11:34 left and appeared to be cruising when Toye, who led Vanderbilt with 18 points, knocked down the first of his four 3-pointers.

Over the next seven minutes, Vanderbilt outscored Arkansas 17-6 and took a 60-58 lead on a 3-pointer by Saben Lee with 4:54 left. The game was back and forth the rest of the way.

Toye hit his fourth 3-pointer with 40 seconds left to give Vanderbilt its last lead at 66-64. Arkansas called a time out and the Razorbacks worked the possession down to just 14 seconds when freshman Keyshawn Embery-Simpson hit the biggest shot of his young career, knocking down an open 3-pointer to give Arkansas a 67-66 lead.

"I'm not even sure what the plan was (on that possession)," Gafford said. "We got the ball inside but I had to kick it back out a couple of times when they triple-teamed me."

"I just saw him out there wide open and made the pass and he knocked the shot down for us."

After a Vanderbilt offensive foul, Mason Jones hit a pair of free throws with seven seconds left to seal the win.

BIG PICTURE Arkansas has won three of its last four games after battling through a stretch when it lost five of six. The Razorbacks face a tough stretch over the next four games with three on the road.

HE SAID IT "This has been a tough stretch," Drew said. "A tough stretch for a lot of reasons. Three of these games, in the last 1:30, just every break has gone against us."

TIPINS Arkansas as a team was 15-of-20 from the free-throw line. . Gafford and Joe took 25 of Arkansas' 51 shots in the game. . Gafford just missed a double-double with 9 rebounds. . Vanderbilt was called for 7 charging fouls.

UP NEXT Vanderbilt: The Commodores will host Alabama at 7:30 p.m. Saturday.

Arkansas: The Razorbacks are at South Carolina on Saturday, the first of three of the next four games on the road. Tip off is set for 2:30 p.m.