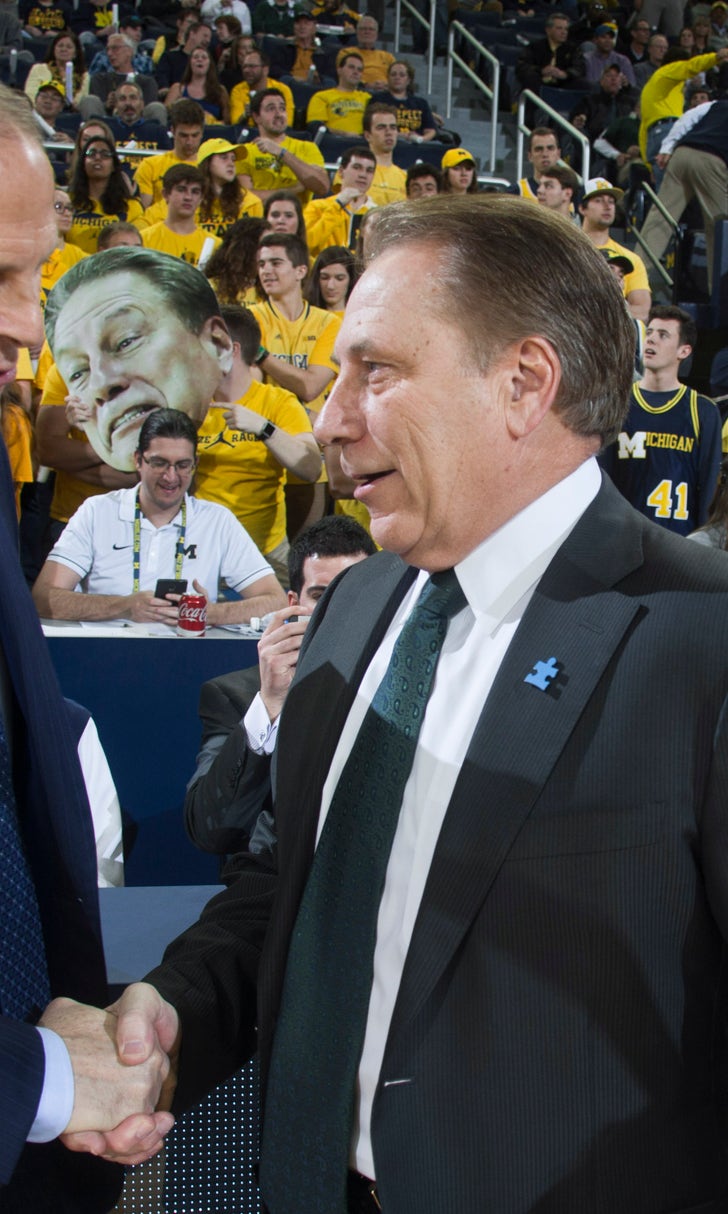 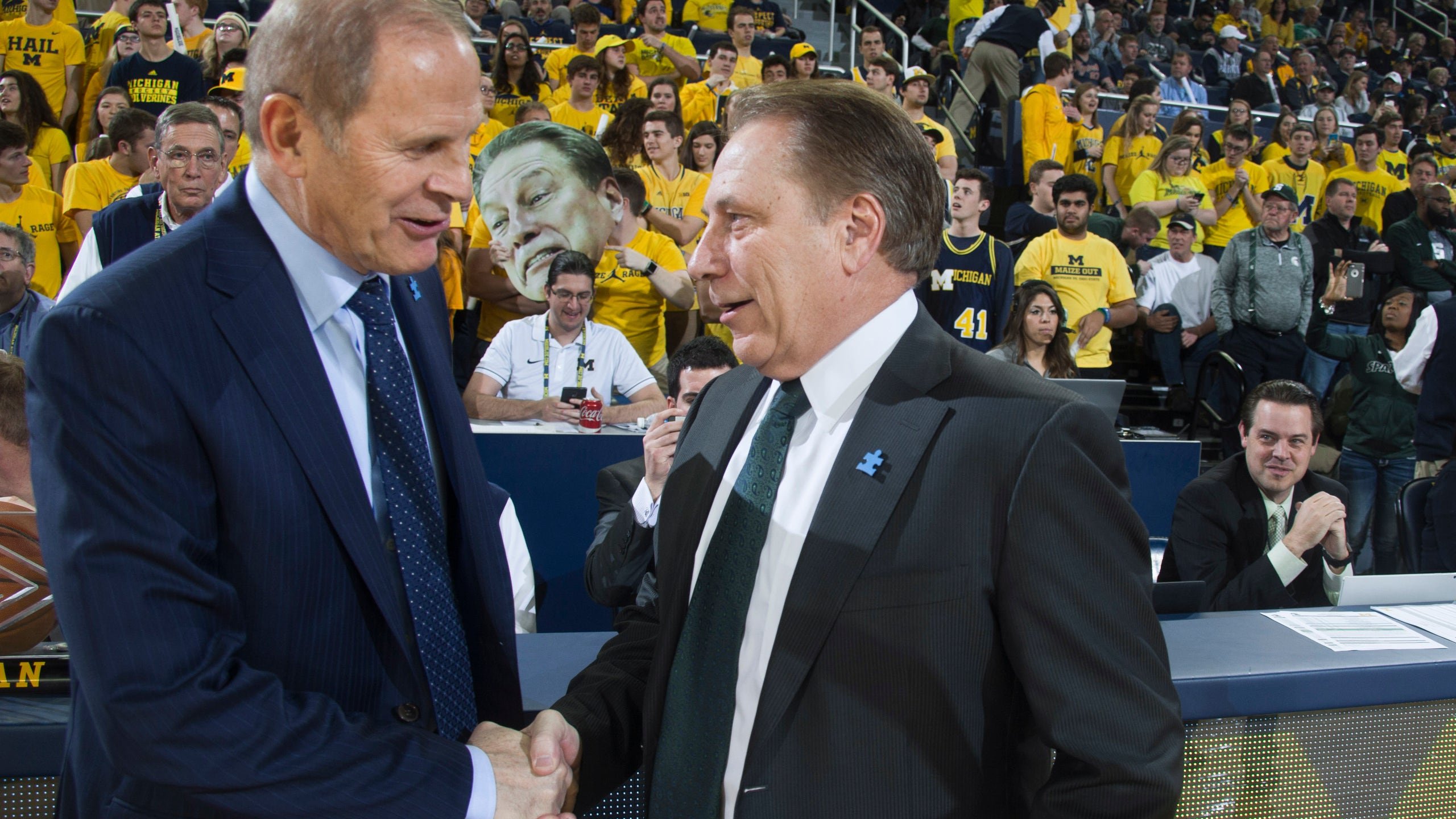 ANN ARBOR, Mich. (AP) — Michigan coach John Beilein, shaking off the effects of anesthesia, looked at his phone for the first time a few days after having double-bypass heart surgery last summer.

As Beilein scrolled through hundreds of texts sent from well-wishers, he noticed Michigan State coach Tom Izzo was among the first to reach out.

"He actually suggested, 'I'd like to come down and visit,'" Beilein recalled in an interview with The Associated Press. "I sort of quelled that right away. No, I'm not going to be doing visits for a long time. I appreciate it.

"But that was how our relationship is — much respect."

"Back when he had his heart issues, the human side of me felt bad for him because I know he's a good guy who lives his life the right way," Izzo told the AP. "I couldn't believe when it happened."

Beilein and Izzo are friendly rivals whose highly ranked teams will play for the first time this season on Sunday at Crisler Arena with Big Ten title and NCAA Tournament seeding implications.

The seventh-ranked Wolverines (24-3, 13-3 Big Ten) will host the first of two scheduled games against the 10th-ranked Spartans (22-5, 13-3) before wrapping up the regular season March 9 at the Breslin Center in East Lansing.

As much as Beilein and Izzo genuinely like and respect each other, that does not dampen the competition.

"I would be shocked if either side now doesn't want to beat the brains out of the other one," Izzo said. "But I would think it is in a very respectful manner."

Izzo has not always had a warm-and-fuzzy relationship with Michigan coaches during his 24-season run as head coach, following 12 years as Jud Heathcote's assistant. Izzo spent countless hours recruiting some players who ended up playing for the Wolverines, including Chris Webber, and felt as if he wasted his time in some cases because a federal investigation revealed the now-deceased Michigan booster Ed Martin gave Webber and other Wolverines more than $600,000 .

"There were some tough times there," Izzo said.

These days, though, Izzo and Beilein publicly say they don't worry about either program breaking NCAA recruiting rules, while federal prosecutors are in the midst of one of the biggest crackdowns on the corrupting role of money in college basketball.

Izzo's program was mentioned in a positive light during a federal trial that began in New York last fall surrounding the recruitment of high school star Brian Bowen Jr. Former sports agent Christian Dawkins pleaded not guilty to charges he plotted to pay Bowen's father in exchange for his son's promise to commit to Louisville. Dawkins' defense attorney Steve Haney said Michigan State was one of the only schools that would not have paid Bowen to attend, according to the Arizona Daily Star.

"It never crossed my mind at one time with either us or with Michigan State in any way," Beilein said. "We just don't operate that way. You don't have this level of success for all these years without a certain amount of integrity in your program. It will show up, it will eventually show up, if you're cutting corners."

The 64-year-old Izzo, inducted into the Basketball Hall of Fame in 2016, won a national championship in 2000 and has coached in a Big Ten-record seven Final Fours. Michigan State's all-time winningest coach has a 596-230 record and won his eighth Big Ten regular-season title last season and will aim for his sixth conference tournament championship next month. Izzo will then lead the Spartans to the NCAA Tournament for a 22nd straight year, a streak that trails just two coaches: the late North Carolina coach Dean Smith and Duke's Mike Krzyzewski.

The 66-year-old Beilein may also be enshrined someday with basketball's all-time greats in Springfield, Massachusetts. He led the Wolverines to the national championship game last season for the second time in six years. Beilein has won a school-record 272 games, two Big Ten regular season and two conference tournament championships. He has won more than 800 basketball games over 43 seasons, including his first job as the junior varsity coach near his hometown at Newfane High School in 1975, in a career that doesn't include ever being an assistant coach.

Izzo grew up in Iron Mountain, Michigan, in the state's Upper Peninsula, and has had a front-row seat for the in-state series since he was a part-time assistant for Heathcote in 1983. Beilein is from Burt, New York, near the banks of Lake Erie, and is in his 12th season at Michigan.

"I always tell John, I hate Michigan because you got to," Izzo said. "He didn't understand that at first. I said, 'You haven't been here long enough.' I mean that with a little bit of laughter. I have great respect for the University of Michigan. I probably have even more respect for John Beilein."

Both coaches say they rarely compete for the same prospects, but they talk about their shared interests while they're recruiting in gyms from coast to coast.

"We're always at the same events," Izzo said. "When we're there, he talks about his cottage. I talk about mine. The place that neither one of us ever gets to be, but we kind of love. Talks about his new pontoon boat."

And, they laugh together.

Beilein shared a story from 2015 after Michigan State beat Michigan twice and went on to the Final Four, sending Beilein retreating to his home in northern Michigan to get away and relieve some stress. After a workout, he tried in vain to relax.

"As soon as I ended up putting on the TV, Tom was doing some boat commercial for somebody," Beilein recalled with a chuckle. "It was like the first face I saw. I told him the story, too. That's all I needed to see.

"When we talk, that's one of our connections. We love getting away with our families and sort of just being a dad and a husband — and a boater — and somebody who just likes to look at the water. It sort of takes you away from coaching."