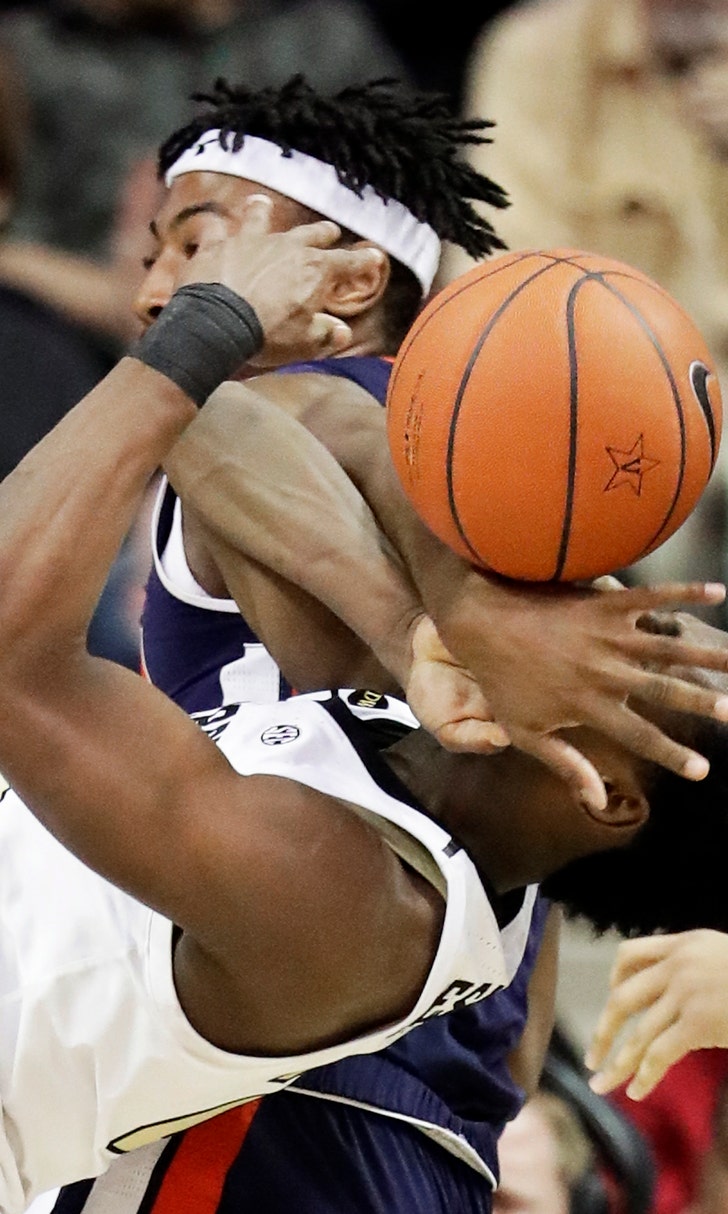 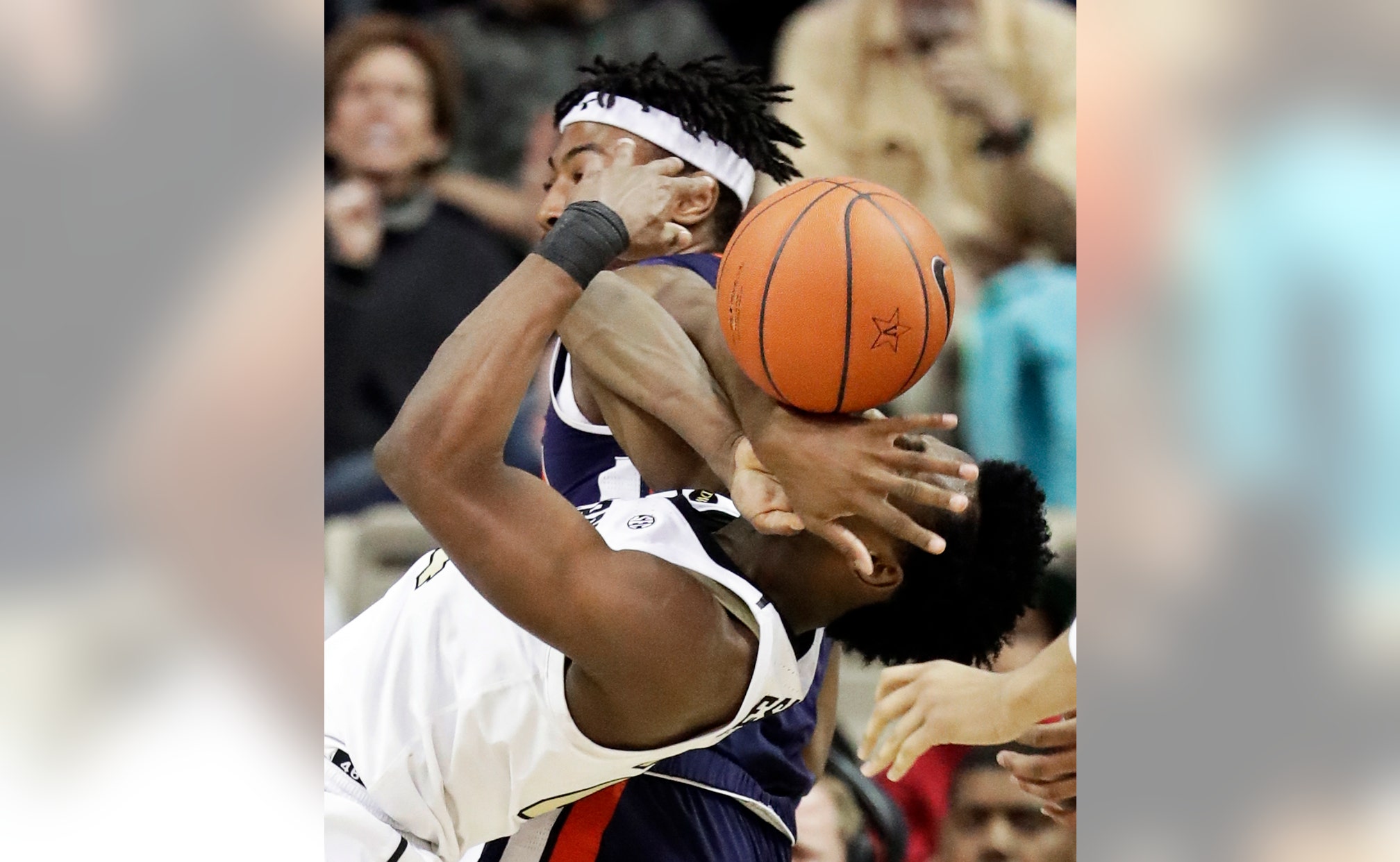 NASHVILLE, Tenn. (AP) — With shots not falling, the Auburn Tigers focused on defense to steal away from Memorial Gym with a very rare win.

"That's a long time, and so I'm proud of our kids for grinding and able to get the win," Auburn coach Bruce Pearl said. "We struggled offensively, Vanderbilt played hard ... Our defense was really good. We turned them over 19 times."

Not only did Auburn turn Vanderbilt over 19 times, 10 of those were steals as the Tigers had a 17-0 scoring edge off turnovers.

"We were flying around out there because our focus was not on any individual offense," Pearl said. "Our focus was on winning the game and getting out of here and trying to make some history."

Auburn (17-8, 6-6 Southeastern Conference) had lost 13 of the last 14 against Vanderbilt inside the league's oldest gym and had won only twice here since 1990. The Tigers survived a first half with their worst shooting performance in nearly a year to snap a nine-game skid to Vanderbilt along with their two-game skid this season.

The Commodores (9-16, 0-12) lost their 13th straight, putting them just a loss off the longest losing streak in school history set over the span of the 1934-35 and 1935-36 season. Vanderbilt coach Bryce Drew called the skid uncharted waters for both himself, his assistants and his players.

"It's been a big character check," Drew said. "What is our program about? Where does our program stand? Where is our program going? As we're walking through this adversity, I'm seeing a vision, even more of a better vision than I saw a few years ago."

Aaron Nesmith led Vanderbilt with 24 points and a career-high 14 rebounds. Yanni Wetzell had his first double-double at Vandy with 10 and 10.

The Commodores wouldn't go away, pulling within four twice within the final five minutes. Brown stole the ball from Matt Ryan to set up a Dunbar layup with 3:53 left. Wetzell scored on a tip-in for Vandy, and Nesmith followed with a pair of free throws pulling the Commodores within 57-53.

Vandy then forced a couple missed shots before coming away with the ball. Lee held the ball before trying to drive in only to be stripped by Anfernee McLemore, and Dunbar knocked down a 3 with 1:33 left. The Tigers finished the game scoring the final seven points.

Auburn led 27-23 after an ugly first half where the Tigers made only two field goals inside the arc with four more from 3 surviving a nearly 8-minute stretch without making a basket.

Auburn: The Tigers survived their worst half of shooting since March 18, 2018, in the first half in a loss to Clemson in the NCAA Tournament. The Tigers went 6 of 24 for 25 percent. The shooting woes filtered into Auburn's shooting outside the arc. A team averaging 11.04 made 3s a game went 9 of 25.

Vanderbilt: The Commodores lost one of their key freshmen when Simisola Shittu fouled out for only the second time this season. He fouled out with 8:35 left and finished with a career-low 17 minute splayed. He also matched his fewest field goal attempts with two and finished with six points. It didn't help that point guard Saben Lee, who took over when Darius Garland was lost for the season, was held to four points for a second straight game.

The Commodores fixed a couple areas where they had been struggling: free throws and rebounds. They hit 14 of 15 in the second half at the free throw line, and they outrebounded Auburn 43-27.

A Blueprint For Georgia?
The No. 4 Bulldogs shut down rival No. 7 Auburn once more, and might have showed their three keys to success along the way.
October 3, 2020
those were the latest stories
Want to see more?
View All Stories
Fox Sports™ and © 2021 Fox Media LLC and Fox Sports Interactive Media, LLC. All rights reserved. Use of this website (including any and all parts and components) constitutes your acceptance of these Terms of Use and Updated Privacy Policy. Advertising Choices. Do Not Sell my Personal Info