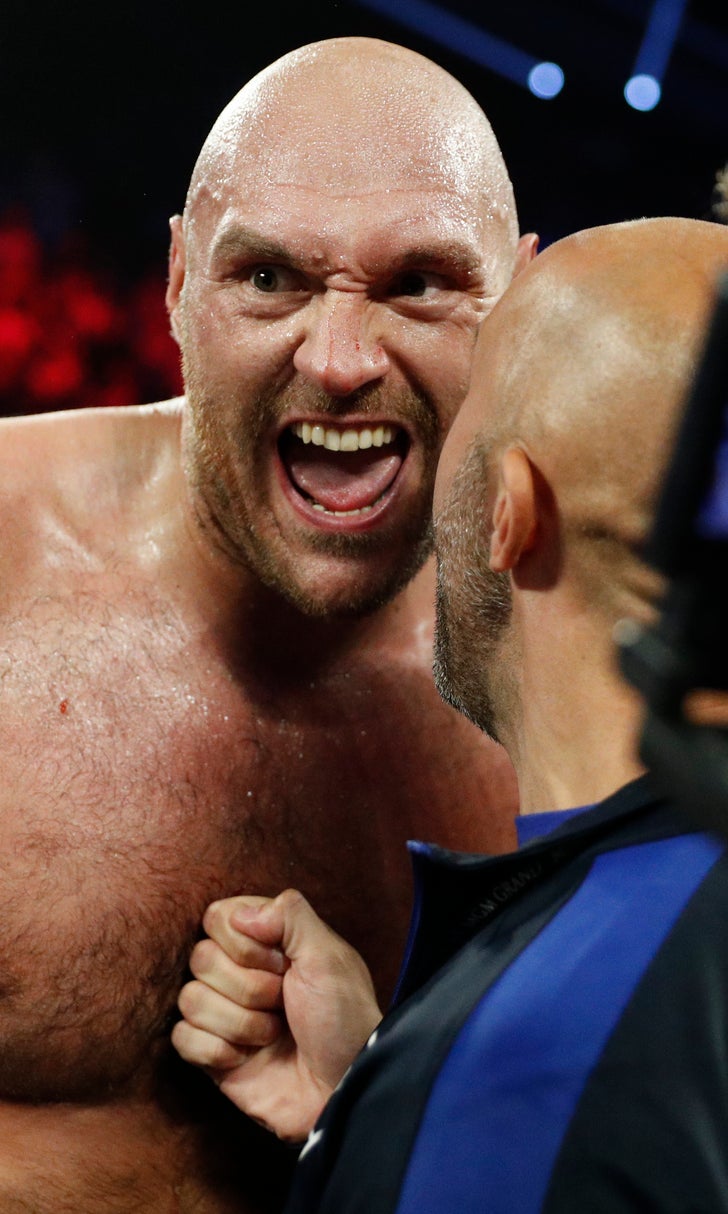 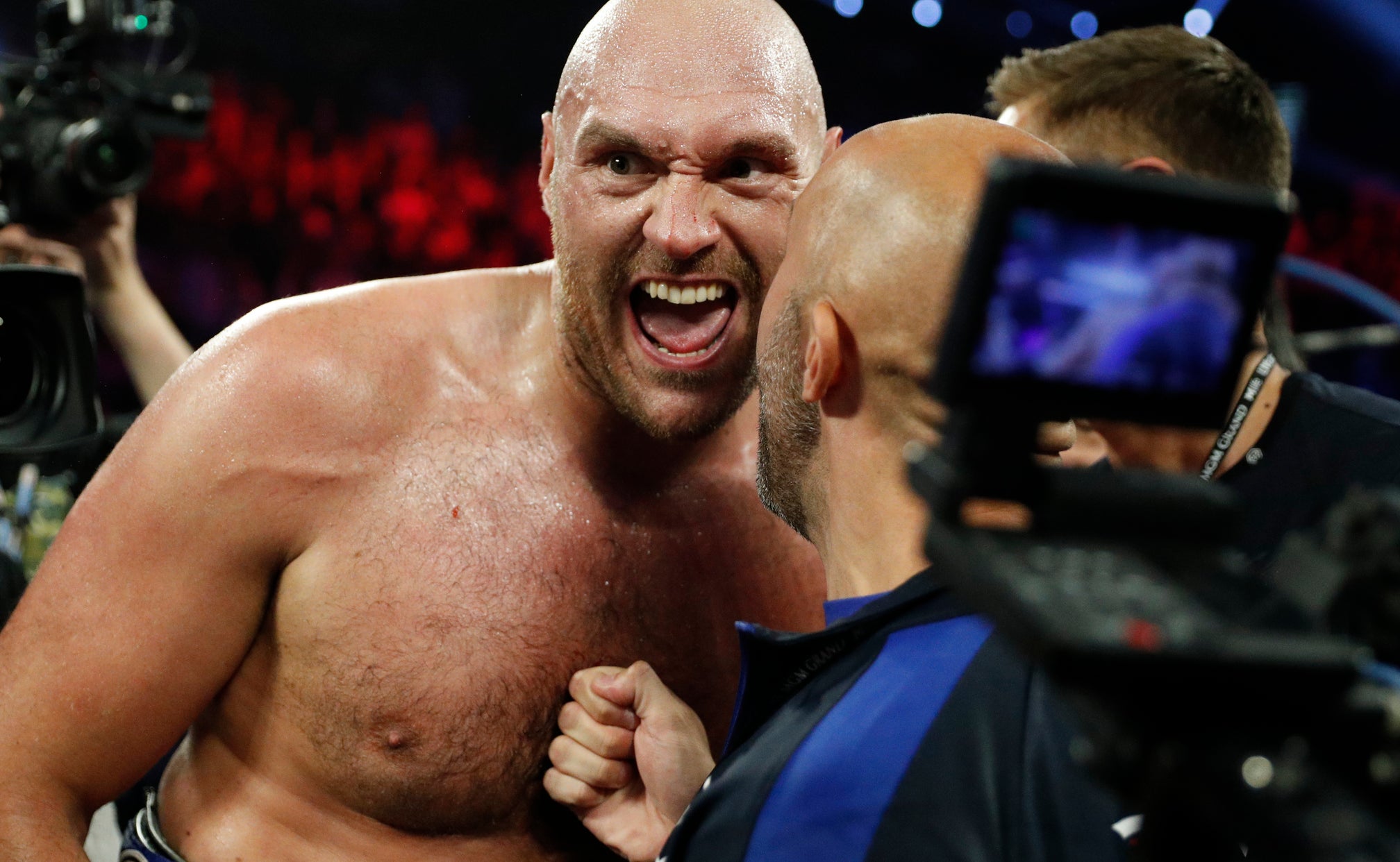 LAS VEGAS (AP) — Tyson Fury put on a show before, during and after his first bout in the fight capital of the world.

The British heavyweight star stopped Tom Schwarz with 6 seconds left in the second round Saturday night, packing plenty of entertainment into his brief Las Vegas debut.

Fury (28-0-1, 20 KOs) made short work of his previously unbeaten German opponent, battering him with a jab before knocking him down to a knee in the second round right after Schwarz (24-1) landed a big punch. Fury pressed ahead after the knockdown and forced Schwarz's corner to throw in the towel before the bell.

Fighting for the first time since he dramatically rose from a devastating 12th-round knockdown to secure a draw with Deontay Wilder, Fury confirmed his world-class ability following his comeback last year from a 2 1/2-year ring absence.

"I came here to enjoy myself and put on a show for Las Vegas," Fury said. "I hope everybody enjoyed it as much as I did."

Although Fury already had memorable fights in New York and Los Angeles, the Manchester native wanted something special in Sin City, which he once vowed never to visit before he got a fight here.

The performance by the world's lineal heavyweight champion against an overmatched foe was just as dominant as expected, but Fury's shenanigans before and after the bout at the MGM Grand Garden might prove to be even more memorable.

After Schwarz ring-walked to the mellow strains of Bob Marley, Fury appeared in red-white-and-blue gear — including a top hat — as he stepped through a cordon of showgirls. With a broad grin, he took the ring to James Brown's "Living in America," the entire entrance in homage to Apollo Creed's famed fictional entrance at the MGM Grand in "Rocky IV."

Unlike Creed, Fury survived and won.

And after the bout, Fury showed off his decent singing voice in what's becoming a post-fight tradition. With the microphone in his boxing glove, Fury serenaded his wife, Paris, with Aerosmith's "I Don't Want to Miss a Thing."

The first fight of the 30-year-old Fury's lucrative new co-promotional deal with Top Rank was intended to introduce his violent skills and loquacious character to ESPN's large audience, and he did both — however briefly.

"The key tonight was to enjoy myself," Fury said. "I used the jab. I was slipping and sliding. I caught him with the straight left. It was a good shot. It could put anybody away. I put on an extra 12 pounds, and I could really feel (the power)."

After dominating the first round with his jab, Fury switched to a southpaw stance late in the second round, and Schwarz caught him with a shot. Fury got mad, battering Schwarz with a combination and dropping him to a knee with a huge right hand to the head.

Schwarz got up with a badly bloodied face, and Fury teed off, peppering his turtling opponent with big shots. Referee Kenny Bayless stopped it at roughly the same moment Schwarz's corner threw the white towel into the ring.

The 6-foot-5 Schwarz is highly ranked by the WBO, but he had never fought outside his native Germany or the Czech Republic before Fury's camp picked him for this showcase bout.

Schwarz was aware that just two weeks ago, Anthony Joshua was stopped by Andy Ruiz Jr. at Madison Square Garden in one of the biggest upsets in recent boxing history. Schwarz never appeared to have a chance of pulling a similar upset — not with the 6-foot-9 Fury towering over him and fighting in crisp form.

Fury said he plans to fight again on Sept. 21 or Oct. 5, "and next year, we're going to hold down Deontay Wilder and make him give me that green (WBC championship) belt."

"There is no heavyweight in the world that can beat him, now that he is in shape," Arum said. "Deontay Wilder is not going five rounds with him. We will have another fight (on Oct. 5), then we will fight Wilder."

Fury improved to 3-0-1 since returning from a 2 1/2-year ring absence while he battled substance abuse, depression, enormous weight gain and suicidal thoughts. Fury's life fell apart after he won multiple title belts with his stunning victory over Wladimir Klitschko in 2015, but he has put it back together with bigger goals in mind.

With a gentler public persona and a commitment to opening dialogue about mental health issues, Fury's redemption has rekindled the interest of many boxing fans turned off by his past homophobic and sexist statements.

Although Fury had to relinquish his titles during his ring absence, he is still the heavyweight division's lineal champion as the man who beat Klitschko.

Garcia's Welterweight Mt. Rushmore
Before he does battle with Errol Spence Jr. on Saturday, Danny Garcia lays out his four favorite fighters of all-time.
15 hours ago

Errol Spence Jr.'s Top 5 Fighters
Ahead of his epic clash on FOX Sports PPV with Danny Garcia, Spence lists the best pound-for-pound fighters in the world.
2 days ago

What You Need To Know: Spence vs. Garcia

What You Need To Know: Spence vs. Garcia
Errol Spence Jr. and Danny Garcia square off on Dec. 5 in a FOX Sports pay-per-view title bout. Here's everything to know.
3 days ago

KO Steals Show In Tyson vs Jones Jr.
Mike Tyson and Roy Jones Jr. finally squared off in the ring, but an undercard knockout and Snoop Dogg had everyone talking.
4 days ago
those were the latest stories
Want to see more?
View All Stories
Fox Sports™ and © 2020 Fox Media LLC and Fox Sports Interactive Media, LLC. All rights reserved. Use of this website (including any and all parts and components) constitutes your acceptance of these Terms of Use and Updated Privacy Policy. Advertising Choices. Do Not Sell my Personal Info