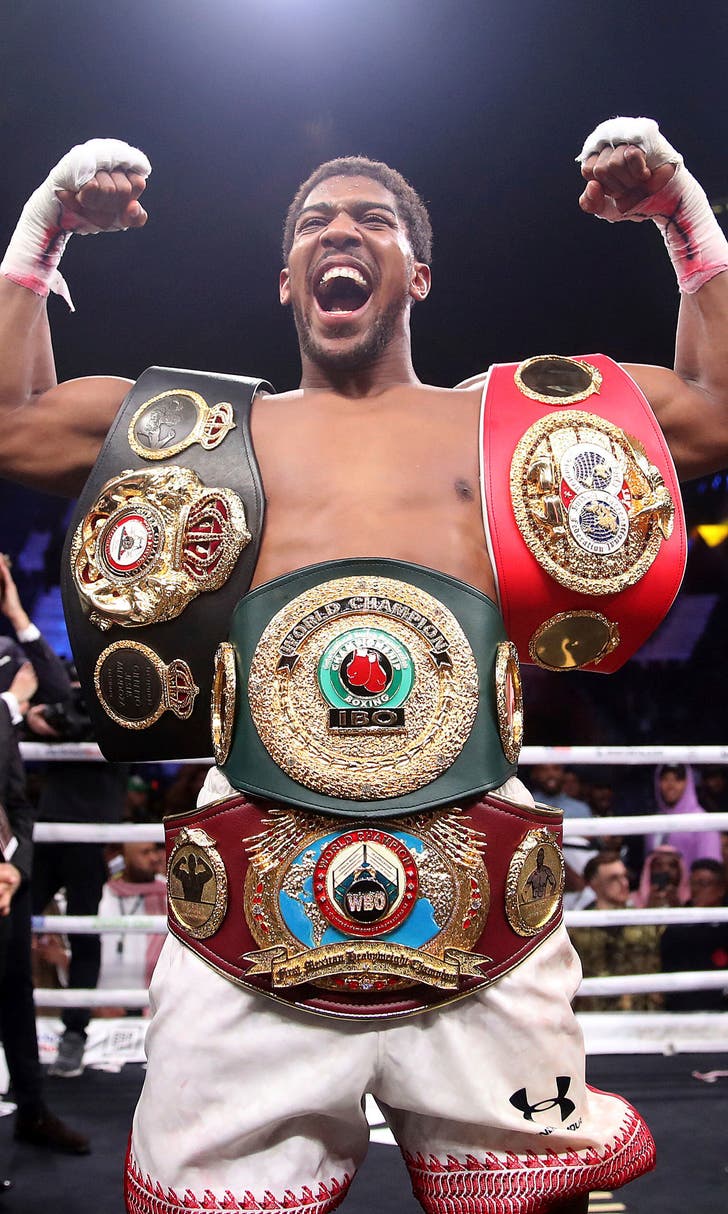 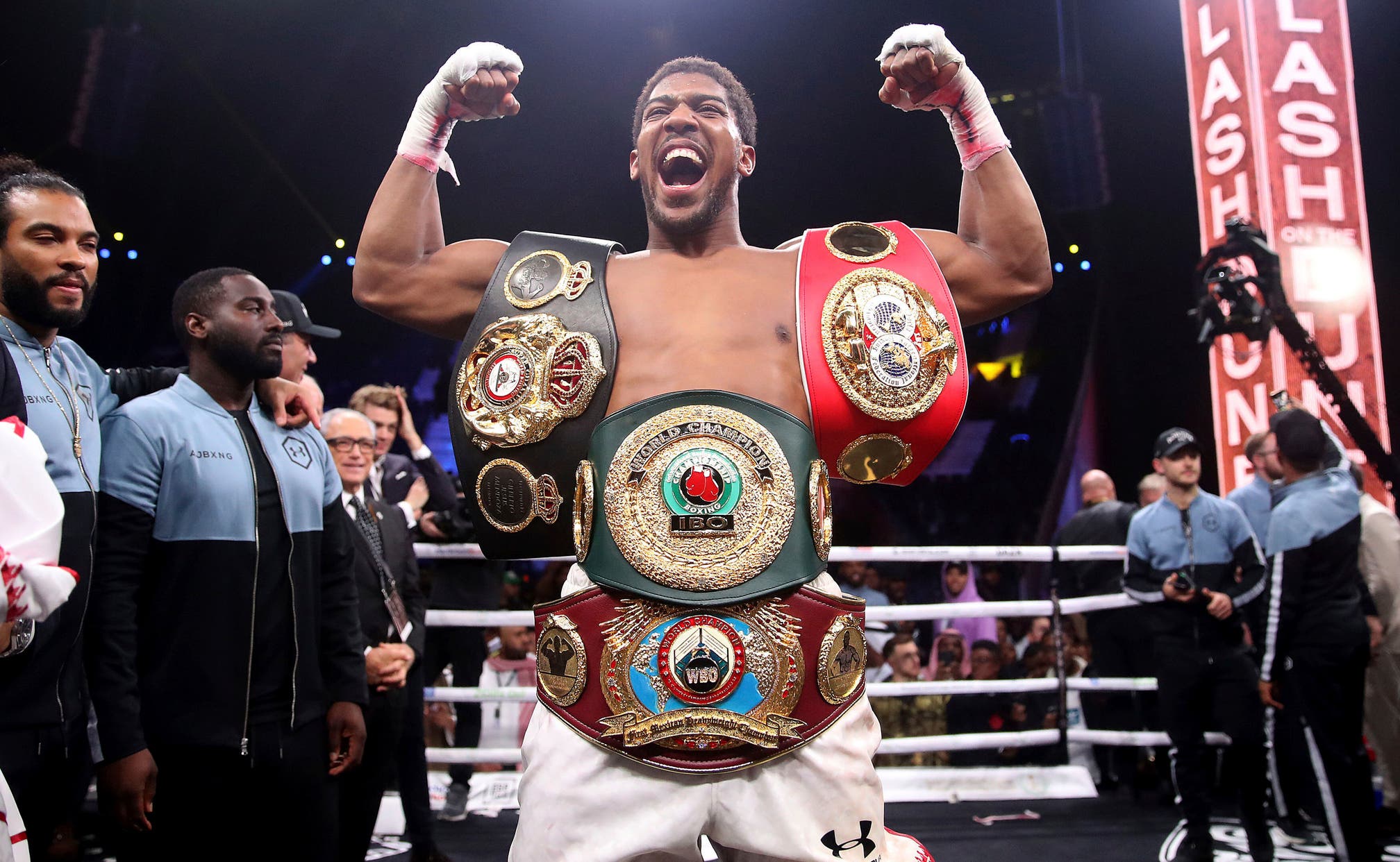 RIYADH, Saudi Arabia (AP) — It’s not all about the devastating knockout for Anthony Joshua anymore.

He’s not going to go desperately chasing Deontay Wilder for the elusive belt in his heavyweight collection, either.

After what he describes as a “roller coaster” year, the British boxing star is back as the multiple world heavyweight champion after beating Andy Ruiz Jr. in a unanimous points decision in their rematch in Saudi Arabia early Sunday.

Listening to Joshua after the fight, there's a sense he is about to embark on a new path to domination of the marquee division. The drastic change to his fighting style and mind-set is an indication of that.

Against Ruiz, Joshua overhauled his approach — “I took it back to the old school, ‘70s style,” he said — and used dancing feet instead of his traditional power-punching to break down his opponent.

“Boxing’s a sweet science,” Joshua said with a grin. “Hit and don’t get hit. That’s the name of the game.”

For a heavyweight who made his name as a knockout merchant, Joshua has only won one of his last five fights by knocking his opponent to the canvas, in a period stretching back 2½ years. He is becoming more cautious, more of a student of boxing.

Expect that to continue in his second reign as champ after regaining the WBA, WBO and IBF belts.

Joshua said he has learned his lesson after not preparing properly for his first fight against Ruiz in June, which went badly wrong when he was knocked down four times before being stopped in the seventh round at Madison Square Garden. He told the BBC on Sunday that he had an “issue with my health” before that fight that led to him putting his head in a bucket of ice because he felt “tired and drained." Joshua gave no precise details about the issue.

When asked if his fans might have expected more from Joshua in the controversial rematch in the Middle East, where avoiding Ruiz played as big a part in the game plan as punching him, the Briton said: “If I box for the crowd and people’s opinion, I might not have been victorious. I trusted my own process and now I am the champion. I’m going to follow my own instincts while I’m boxing.”

The more mature side of Joshua might also come through in his seemingly never-ending pursuit of Wilder, the WBC champion who owns the belt Joshua needs to become the first unified champion since Lennox Lewis early this century.

“I would love to unite the belts,” Joshua said. "But when you are chasing … it’s the same as when you’re in the fight. Sometimes if I’m chasing the right hand, I’m chasing the left hook, it may come crashing down on me.

“I realize chasing that fight wasn’t playing to my benefits. So I’m just going to let the path take its course. When the opportunity presents itself to become undisputed heavyweight champion of the world, I’ll definitely step up and take the challenge.”

So, for the time being, Joshua appears likely to fight mandatory challengers, probably starting with Kubrat Pulev of Bulgaria in the spring to keep the IBF belt. Then, Oleksandr Usyk — the unified cruiserweight champion who recently stepped up to heavyweight — in the summer to retain the WBO strap.

Only then could he realistically fight “the other guy,” as Joshua often refers to Wilder.

So, apparently, there is no real rush to meet the American. Not like a couple of years ago when that unification fight clearly dominated the thoughts of Joshua and his ambitious promoter, Eddie Hearn.

The loss to Ruiz in New York could, then, be the making of Joshua. It was a shock to the system, making him realize it will not be a straightforward ride to global domination, that he cannot switch off in any fight and expect to pull through.

“It’s nice to KO and there were times when I looked in Andy’s eyes and I wanted to put my fist through his head,” Joshua said. “But then I thought to myself, ‘This is boxing. I need to win for myself, show people that there is a sweet science to the sport as well.’ It’s not like a script, it’s not wrestling, this is real life and it’s dangerous.

“These guys are highly skilled athletes. I just love preparing for a good challenge. This is all I have, all I got. I have disciplined myself for it.”