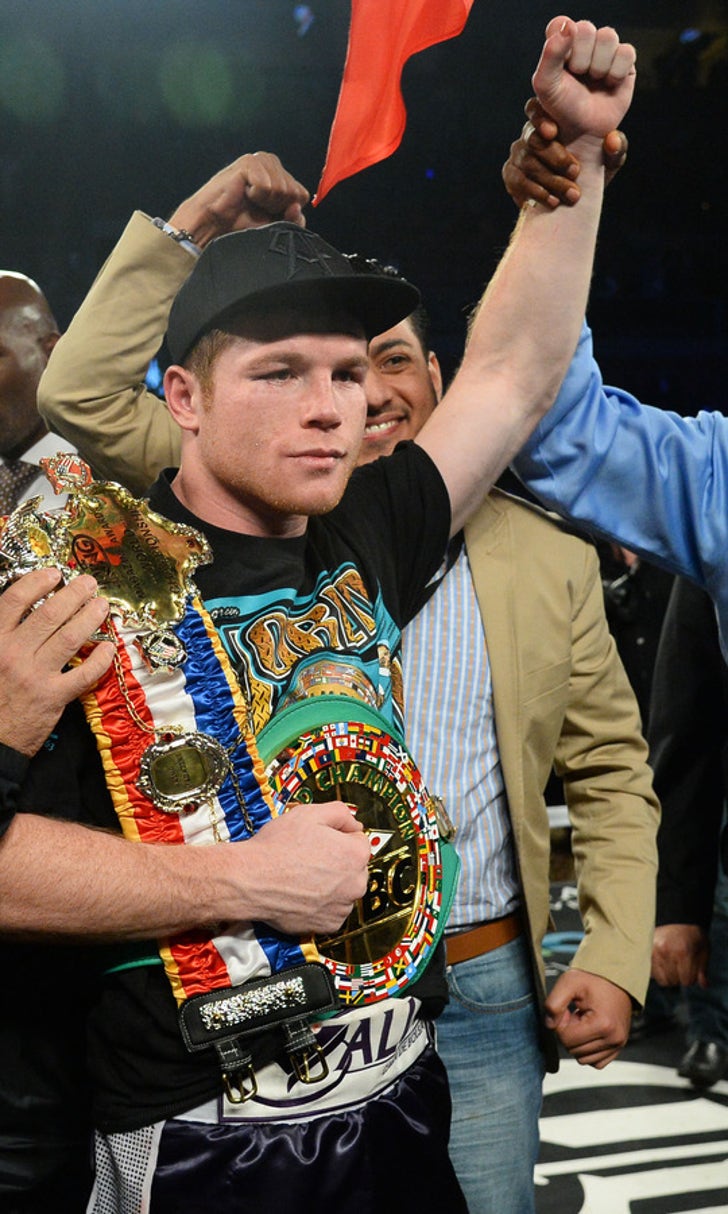 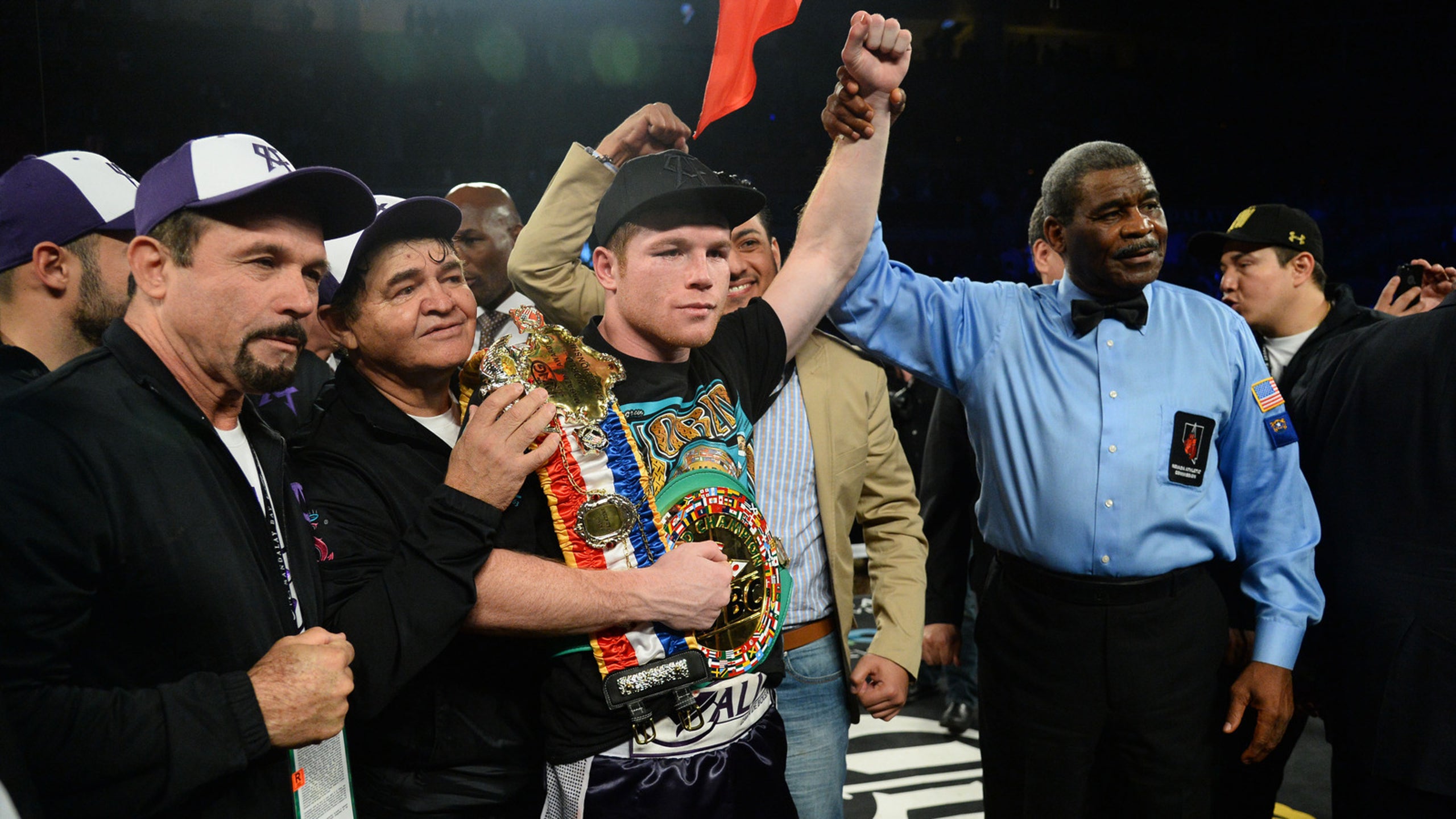 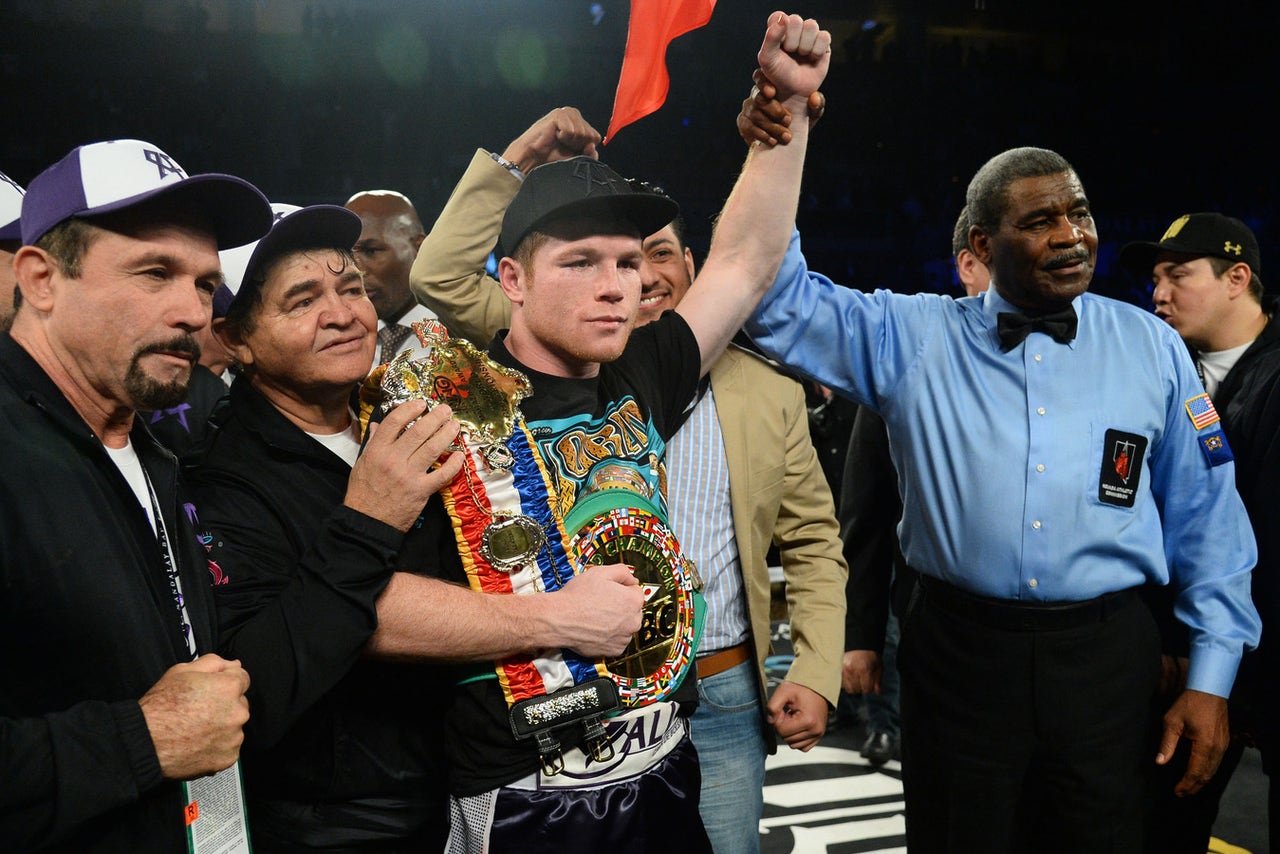 LAS VEGAS — Canelo Alvarez got on his knees to check on Amir Khan after knocking him unconscious with a big right hand in the sixth round of their title fight.

Then he went over to check on some future business with fellow middleweight champion Gennady Golovkin, who was watching ringside.

It's a fight both Golovkin and boxing fans have been waiting for to happen, though the weight could be an issue. Alvarez wants the bout to be less than the 160-pound middleweight limit, while Golovkin, who holds his own piece of the middleweight crown, vows to fight at his best weight.

"I am old school," Golovkin said just before the fight. "Middleweight is 160. I respect the sport of boxing."

Triple G is the last man standing in the ring. Still smiling. pic.twitter.com/uQSn92Hrmp

Against Khan, Alvarez needed only one big right hand to turn a close fight into a smashing knockout that left the British challenger out cold on his back in the middle of the ring.

Struggling with Khan's speed, Alvarez unleashed a long right hand that send Khan backward on the canvas, where referee Kenny Bayless didn't even bother to count him out at 2:37 of the sixth round. 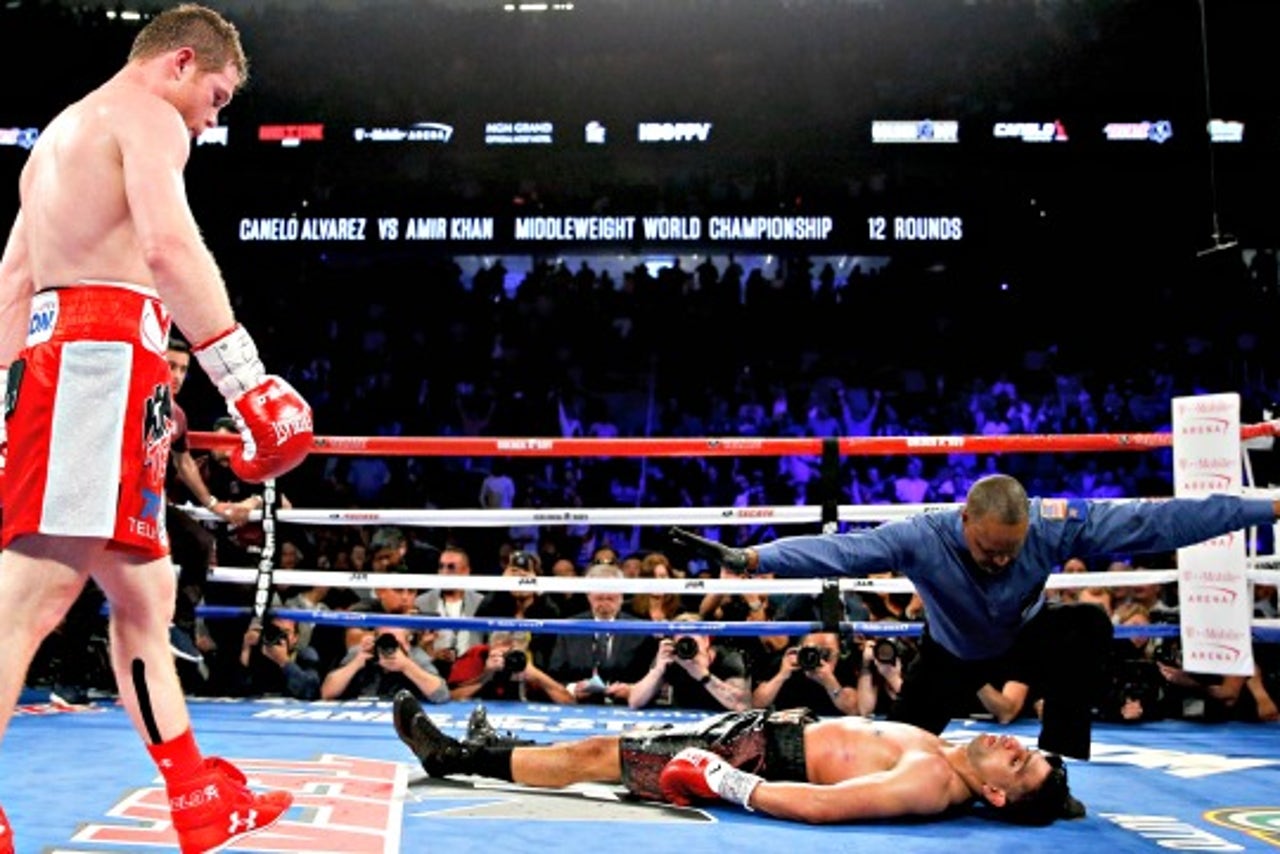 Alvarez retained his piece of the middleweight title, but it was not without some nervous moments for his fans who packed the new T-Mobile Arena on the Las Vegas Strip. Khan was more than holding his own in a tactical fight when the right hand suddenly ended it.

"People have known me only for my power," Alvarez said. "I have many more qualities in the ring and I showed that. I think people saw more of me."

Khan, a 6-1 underdog, had vowed to use his speed to confound Alvarez and his plan seemed to be working. He fought in spurts, landing combinations and seemingly frustrating Alvarez with his movement.

But a right hand that came out of nowhere landed flush against Khan's chin, and he was out before he hit the canvas.

"I was getting in the ring with a big guy," Khan said. "Unfortunately, I didn't make it to the end."

Khan was taken to the hospital after the fight, but promoter Oscar De La Hoya said he appeared to be fine and that the move was precautionary. Khan's head snapped back when he hit the canvas and he appeared out for several minutes before being revived.

Alvarez was making the first defense of the WBC title he won from Miguel Cotto in November, though the fight was fought at a catch weight of 155 pounds. The WBC has said it will take the title from Alvarez if he does not begin talks for a fight with Golovkin within 15 days.

Khan, for one, believes it's a fight that has to happen, and soon.

"It's time that Canelo steps in the ring with Triple G," Khan said.

A pro-Alvarez crowd of 16,540 filled the new arena on the Las Vegas Strip for his first fight on the Mexican holiday weekend that Floyd Mayweather Jr. usually fought on. They came expecting to see Alvarez (47-1-1, 33 knockouts) put on a show, though he had trouble with Khan's speed and movement in the early rounds.

Alvarez chased after Khan (31-4) from the first round on, trying to cut the ring off and corner him on the ropes. He was largely unsuccessful, and Khan answered with combinations to the head, though they seemed to have little effect on the red-haired Mexican champion.

Alvarez was up on two ringside judges' scorecards when the fight ended, while Khan was leading by one point on the third. Ringside punch stats showed Khan landing 48 of 166 punches to 64 of 170 for Alvarez.

Khan, who spent years unsuccessfully chasing bouts with Mayweather and Manny Pacquiao, had to put on weight for Alvarez but was still the smaller fighter.

"I'm a natural 147-pounder and this challenge came and it was hard to turn down," Khan said. "My natural weight is 147 and I will probably go back down to that."

Khan's trainer, Virgil Hunter, joined in the chorus of those who want to see Alvarez and Golovkin fight soon.

"He's got to stop hiding behind the flag and fight the fight that we all want to see," Hunter said of Alvarez.