Xs and Os: 13 Personnel and Where Are My Safeties?

Let’s breakdown a few more moments in the Chargers game of great interest before we close the books and move on to Denver.

Let’s take one offensive situation and one defensive situation today and see what we can find.  Offensively, I want to show you “13 Personnel” which, as you have guessed, is 1 RB, 1 WR, and 3 TEs.  This is an alignment that makes the defense bring 9 in the box.  It screams running the ball, but the second the 9th man heads down into the box, you have opportunities downfield with Dez against a soft corner and a deep, deep safety.

They ran 13 personnel on 2 snaps on Sunday.  These are also the 2 snaps in which Gavin Escobar played.  Both were in the same drive and both were quite successful.  2 snaps, 49 yards, 1 Touchdown, and it was all on basically the exact same play – just flipped to the other side.  Then, they never returned to it.

Triple TE to the bottom, Dez to the top.  The Chargers show 8, but the 9th man is creeping down as Romo looks over the defense.  The Cowboys will move Hanna in motion to H-Back, in front of Murray before the snap. 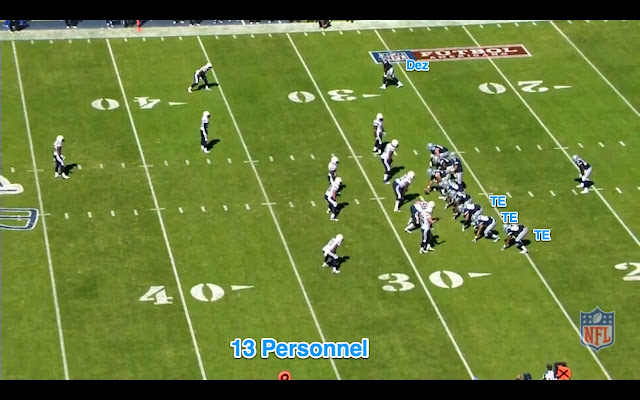 Here at the snap, you can see the 9th man is now there.  The Chargers must remain close to the line until they know run or pass, thus giving Dez all sorts of room to work with against a deep corner and a deeper safety. 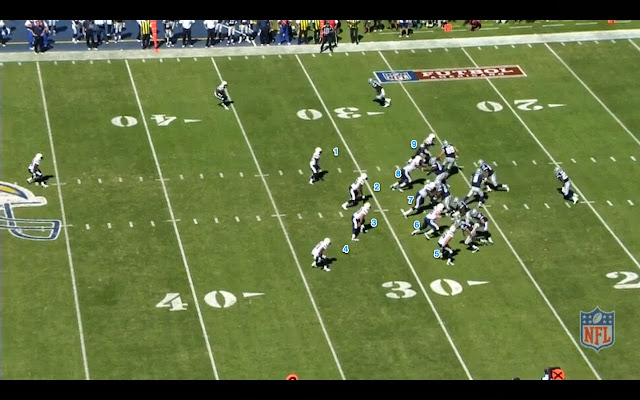 Here are the 3 routes, with 2 of them being check downs as Romo’s primary plan is to hit Dez on a deep-in.  The corner over Dez is playing outside leverage and the safety is just making sure this doesn’t get too messy.  The linebackers are worried about Escobar (maybe too worried) and Murray is going to slide out behind Bryant into the flat. 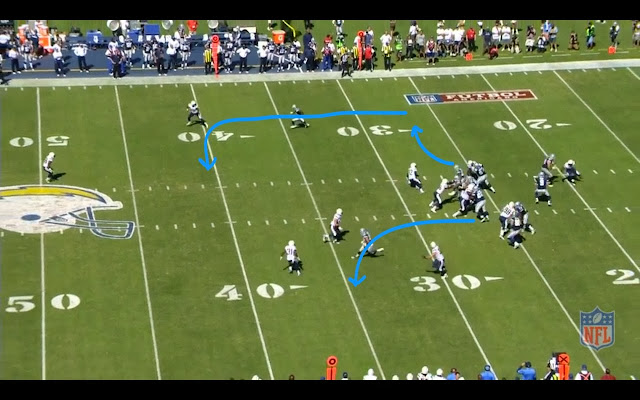 Dez has his 12-15 yards and has a 5 yard circle in every direction for Romo to hit him.  This is incredibly easy. 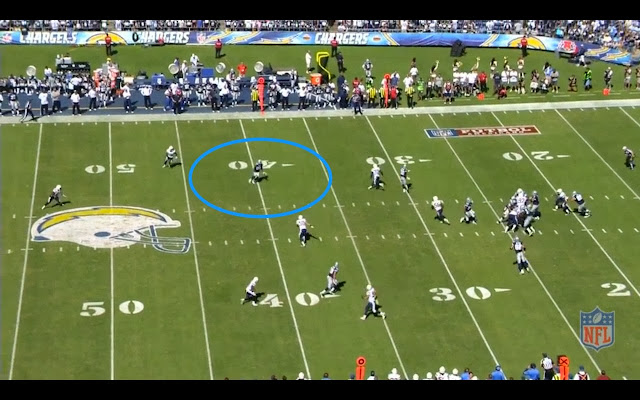 Just a few plays later on the same drive, look what the Cowboys have here.   3 TEs to the right, Dez to the left.  The Chargers are a little more conservative to watch Dez, but they still have to respect the 8 OL alignment and not give Murray too much space. 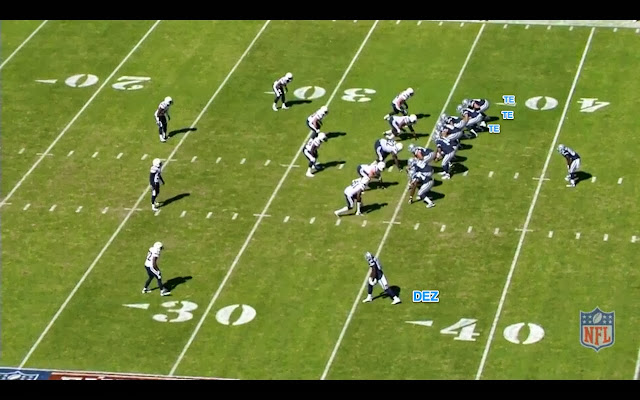 Here at the snap, look at the exact same routes and the same 9 Chargers in deep.  They remain a bit more skeptical that the Cowboys will actually run here, and thus the LBs get into their drop quicker to close off the same exact route that Dez is going to run – his DIG.  This, by the way, is without question to me (although I should check with Jake Kemp and his Bryant study) Dez’s best and most dominating route. 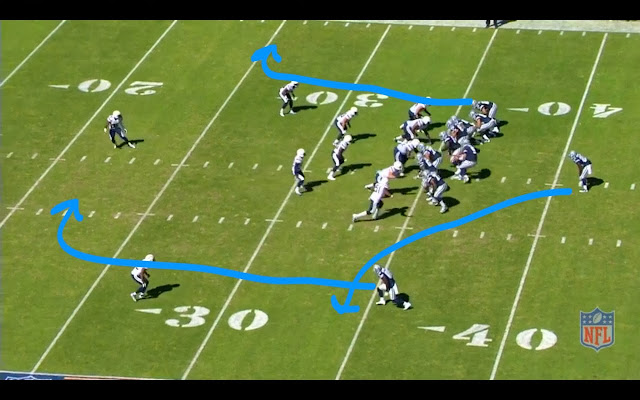 Look at Romo’s pocket and look at his window to hit Dez.  It is a smaller window, but still not a real tough throw for the Cowboys to complete.  The beauty of this one is that Dez is hit in stride and able to elude everyone on the way to the end-zone. 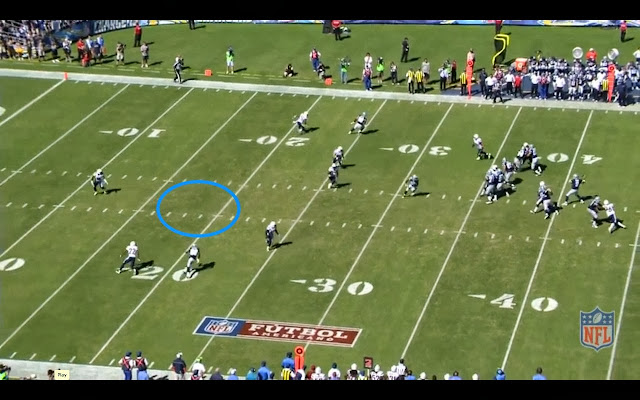 My only conclusion on looking at the success of these 2 plays is that they need to run out of this look to keep the windows big in the secondary.  If you are going to show “13” to Denver, they will be ready for the Dig to Bryant.  But, some strong runs or some variance in the routes will make this a very interesting personnel grouping.

Now, a little game called, where are my safeties?  This game is necessary, because I am guessing just about all of us were asking this question when it appeared the Cowboys were playing without any safeties on the 56-yard Touchdown to Gates in the 4th Quarter that really made the game a difficult proposition.

Contrary to my first belief, the Cowboys did have 2 safeties on the field on this play.  Here is how they lined up and what their assignments appeared to be.  Wilcox to the top was heading downhill to sit on the hook/curl to Gates that had been going all day and Church was going to slide over and play single-high and help the match-up in most need.  Sounds good, but once the snap happened, we saw that did not work out as planned. 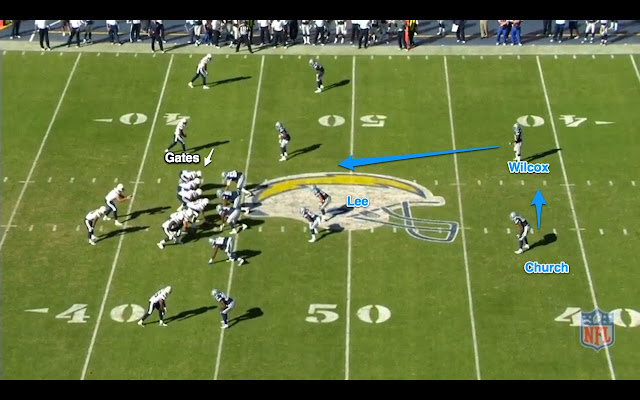 Again, look at Wilcox.  He is sitting on the route that he is sure Gates is about to run.  Church is watching the situation to the top of the screen, trusting that Carr (at the bottom) has his guy locked down and just helping the side with 3 threats.  Again, it all looks fine here. 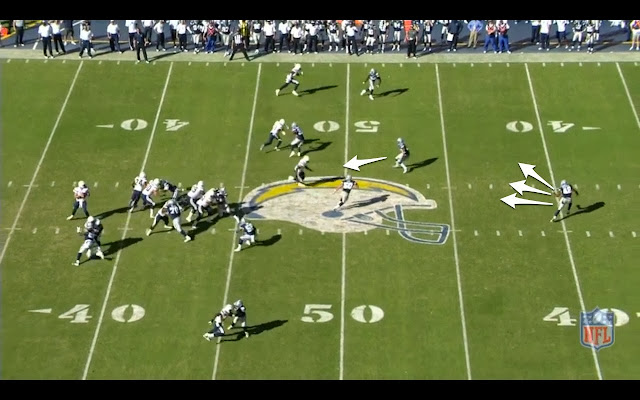 Here is where we see 3 real issues.  1) Scandrick appears to have passed his man in the slot on to the safety help.  This requires Church’s immediate’s attention.  We have seen this issue against zones being a killer – several receivers all running verticals.  Playing zone is not that difficult if the offense is sending one high and one low.  You just make the clear designations and everyone gets their man.  But, what if nobody is shallow and everyone is deep?  Then, it gets tricky because the safety is not able to take everyone’s man.  2) Wilcox is covering nobody and appears frozen in his tracks.  I have no idea what his plan is here (it almost looks like he is now playing a shallow zone for Matthews out of the backfield – but so does Scandrick and Sims.  That is a lot of personnel dedicated to 1 RB, which shows you how 4 verticals can make you look silly in a zone), but it screams that he is a rookie and had no real plan after his first instinct led him down a poor path.  And 3) Both safeties are beyond the hash marks on Rivers’ left.  Therefore, he knows he has man-to-man with Brown/Carr at the bottom or Gates/Lee in the middle.  That is an easy choice and despite Gates not being “open”, Rivers considers this close enough and throws to Gates in these situations all of the time and expects Gates to win.  Why?  Because he usually does.  Especially against a LB. 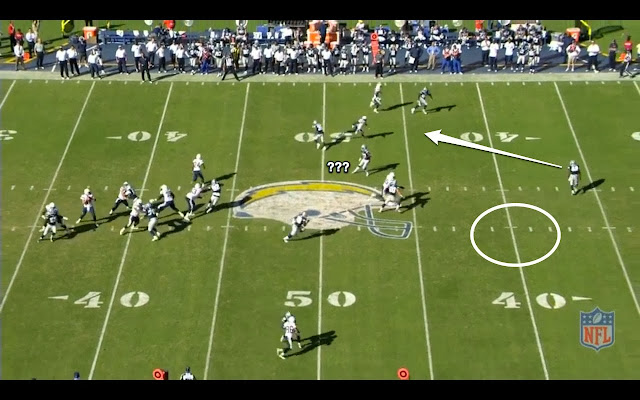 So, what coverage are the Cowboys playing?  It looked like Man-Free at first, but now I am pretty sure it was a full zone (based on Claiborne’s technique and all of the shallow players squared at Rivers) and Lee just knew he couldn’t hand off his man and decided to improv into man on the fly.  Honestly, with
Wilcox and Scandrick, it sure looks like someone isn’t positive what they are supposed to do.

My sources tell me that ultimately, this is a bust on Church.  He is trying to help out the slot guy, but in this zone, Claiborne is responsible for the slot and Church needs to stay high and prevent Gates from that opportunity.  This is not sound coverage and the single-high safety cannot be wrong.  Rivers and Gates thank you for another easy conversion for a Touchdown –