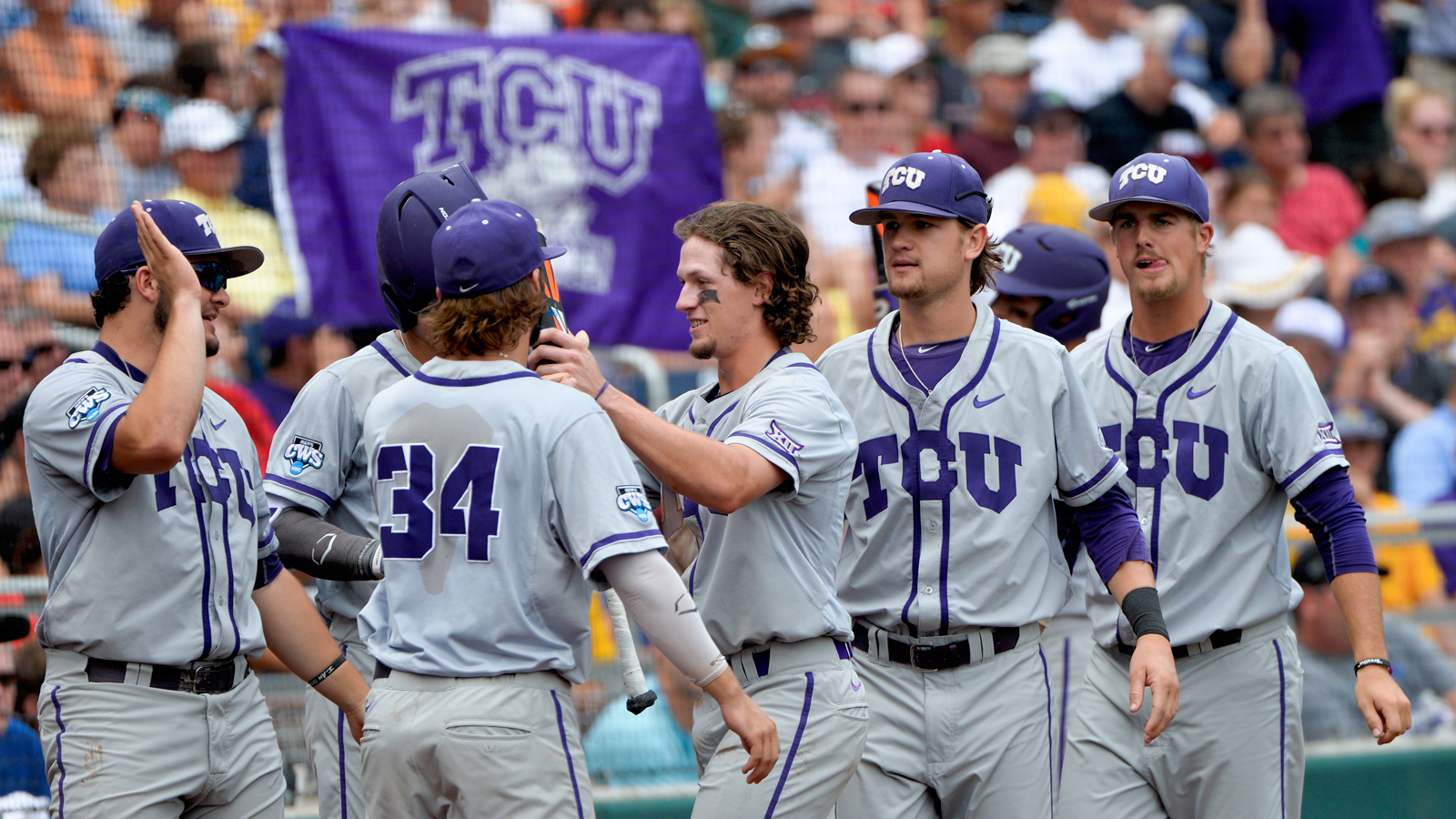 OMAHA, Neb. (AP) — No pitcher in TCU history has as many wins as Preston Morrison, an accomplishment even more remarkable when you consider he joined the Horned Frogs as a walk-on.

Before Sunday, though, he had never won a game in eight career NCAA Tournament starts. The senior finally added that to his resume, pitching seven dominant innings in the Frogs’ 10-3 victory over LSU in the College World Series.

"He’s the best pitcher in the history of the school, bar none, and he’s pitched great in the postseason throughout his entire career," TCU coach Jim Schlossnagle said. "He hasn’t had a lot to show for it because when you’re in the postseason, you’re facing another great pitcher."

That looked to be the case again in the matchup with LSU left-hander Jared Poche’, who had come to Omaha having allowed one run in 16 1/3 innings in the national tournament. But Poche’ had a stunning middle-inning meltdown after retiring nine in a row to start the game. TCU capitalized and won easily in the first game of its second straight CWS appearance.

Morrison (12-2), whose 37 career wins are the most of any active Division I pitcher, limited LSU to five hits and a run in seven innings. He walked none, struck out five and retired the last 12 batters he faced.

"The most important thing for me was getting another step closer to our ultimate goal, the national championship," Morrison said.

The Horned Frogs (50-13) will play a Bracket 2 winners’ game against Cal State Fullerton or Vanderbilt on Tuesday night. The Tigers (53-11) meet one of those teams in an elimination game that afternoon.

LSU, in the CWS for the 17th time, showed up as the No. 2 national seed and 5-0 in the NCAA Tournament. The Tigers cruised along nicely for three innings, with Poche’ (9-2) striking out the side in the first and retiring the next six batters.

But in the fourth, Cody Jones hit a chopper back to Poche’ leading off and wound up on third when Poche’ overthrew first baseman Chris Chinea. Then, Jeremie Fagnan sent a comebacker to Poche’, who looked back Jones at third before pulling Chinea off the bag with another high throw, putting runners at the corners. Connor Wanhanen and Dane Steinhagen followed with RBI singles.

"He comes out in the first inning with all the pressure in the world on his shoulders, and he strikes out the side and gets nine up, nine down and should have had 11 up, 11 down," LSU coach Paul Mainieri said. "The next two batters hit feeble groundballs right back to him and he didn’t execute the play. It spiraled from there."

Poche’ couldn’t explain his struggle to make the routine throw to first.

In the fifth, TCU loaded the bases against Poche’ on two walks and a single. Conner Hale booted a grounder at third, allowing one run to score, and Poche’ plunked Fagnan, bringing home another. Connor Wanhanen’s single drove in two more to put the Frogs up 6-1 run and end Poche’s day.

TCU extended its lead to 10-1 in the seventh, batting around against three relievers and scoring four runs, all coming with two outs.

Morrison threw strikes on 63 of his 89 pitches, but Schlossnagle took him out to start the eighth. Brian Howard came on and gave up Jared Foster’s drive into the left-field bullpen. It was the third home run in three CWS games, matching last year’s 16-game total.

"You’re looking at a TCU hall of famer and a guy who can pitch in the big leagues, and I have no doubt about that," Schlossnagle said.