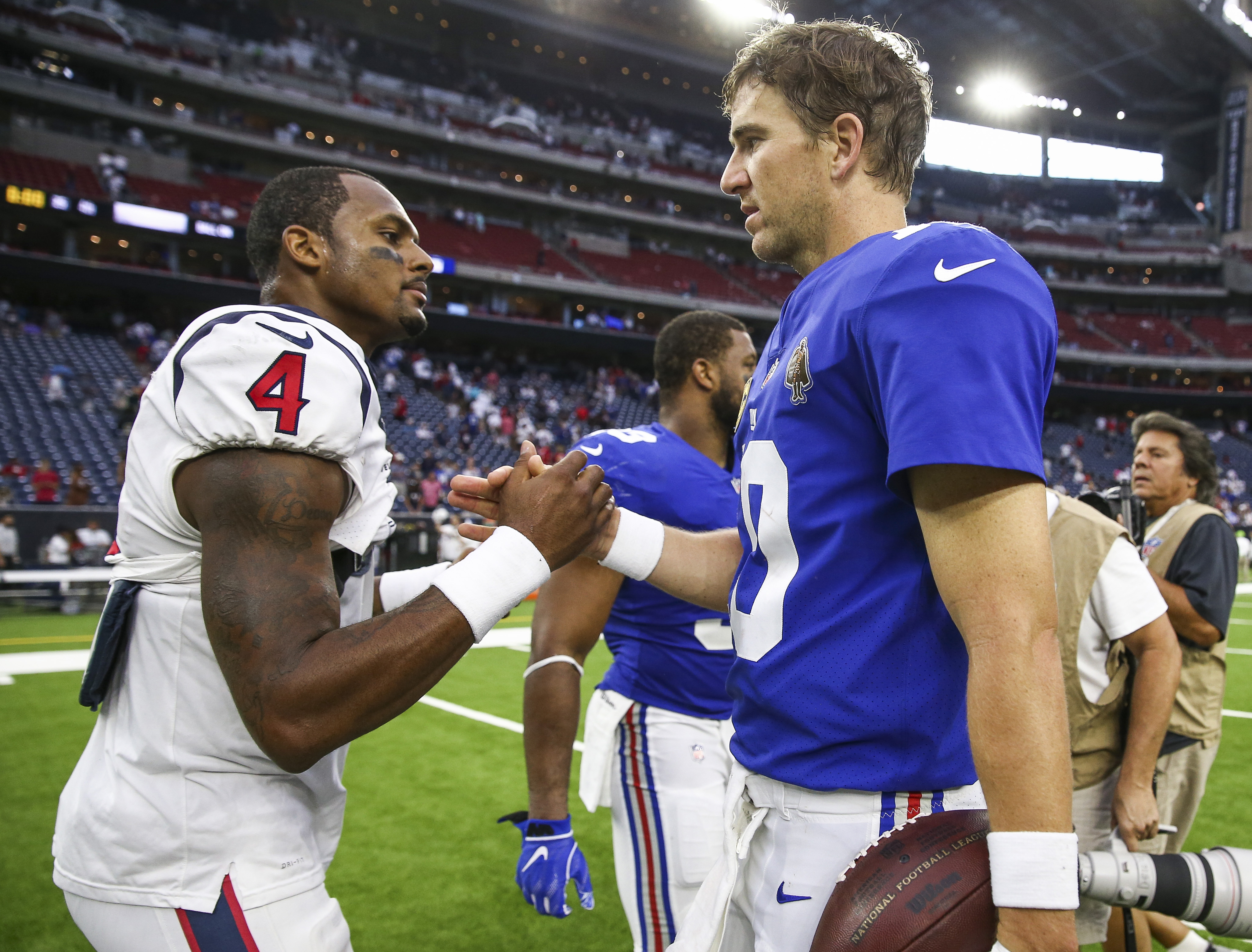 “We came out and played like we loved the game of football and we were kids just having fun,” the star receiver said. “It wasn’t like: ‘We’re down 0-2 and we’ve got to win.’ It was like: ‘Let’s go out and have fun today.’ That’s what we did, and we got the win.”

Eli Manning threw for 297 yards and two touchdowns and rookie Saquon Barkley added a score as the Giants got a 27-22 victory over the struggling Houston Texans.

The Giants (1-2) were up by 14 at halftime but had trouble moving the ball in the second half. The Texans (0-3) had cut the lead to five before Manning threw a 7-yard touchdown pass to Sterling Shepard with about two minutes left.

“I always knew they had great resolve, but (Sunday) we just made enough plays to win,” coach Pat Shurmur said. “We went from being ‘almost’ in a lot of areas to finishing it.”

Deshaun Watson threw a 4-yard touchdown pass to Lamar Miller with 1 second left to cut the lead to 27-22, but New York recovered the onside kick.

Watson threw for 385 yards and two scores, but his interception was one of two second-half turnovers by the Texans, off to their worst start since dropping their first four games of 2008.

“I just try to think of ways to get us out of this,” coach Bill O’Brien said. “I know that it starts with me … I’ve got to figure out how to do a better job. It’s as simple as that.”

Beckham had nine receptions for 109 yards and Barkley finished with 82 yards rushing as the Giants came one point shy of matching their points total from their first two games combined.

A 54-yard field goal got Houston within 20-9 in the third quarter. The Texans forced a punt and were driving again when Miller caught a short pass and fumbled after a hit by Donte Deayon. The Giants recovered but couldn’t move the ball and had to punt after a drive that featured a sack by J.J. Watt.

But the Texans turned over the ball again, this time when Watson was intercepted in the end zone by Alec Ogletree.

Houston cut the lead to 20-15 when Will Fuller grabbed a 6-yard pass from Watson with about 7 1/2 minutes remaining, but the 2-point conversion failed.

After leading the NFL in yards rushing through the first three games, the Texans couldn’t get anything going on the ground. They finished with 59 yards rushing, and Miller managed just 10 yards on as many carries.

The Texans led 3-0 after a 23-yard field goal by Ka’imi Fairbairn on their first drive. The Giants took their first lead this season when Barkley shed multiple tackles on a 15-yard run that made it 7-3.

New York added two field goals before Manning connected with Rhett Ellison on a 16-yard touchdown to push the advantage to 20-3 late in the second quarter.

Watt had a strip sack on third down to make the Giants settle for the second field goal. Watt hadn’t had a sack since Sept. 18, 2016 before taking Manning down on that play.

Houston cut the lead to 20-6 at halftime after a 28-yard field goal.

Watt, who played just eight games in the 2016-17 seasons because of injuries, finished with three sacks, three tackles for losses, four quarterback hits and a forced fumble. The three-time NFL Defensive Player of the Year said he’s feeling progressively better every week and is glad to be contributing again.

“It’s good to finally end such a long drought in that type of way,” he said. “But … personal stats don’t matter at all in a loss.”

Manning did a good job of spreading the ball around, completing at least one pass to six players and finding three guys five or more times.

“I think you want to get everybody involved,” he said. “We got off to a fast start and needed a big drive at the end to win the game and we were able to do it.”

“It’s the story of penalties, mistakes,” Davenport said. “I don’t know how many penalties I had, but way too much. Hurt this team badly. I’ve got to eliminate it all.”

Texans: Visit the Colts next Sunday.