Houston’s Watson healthy and ready for more work this week 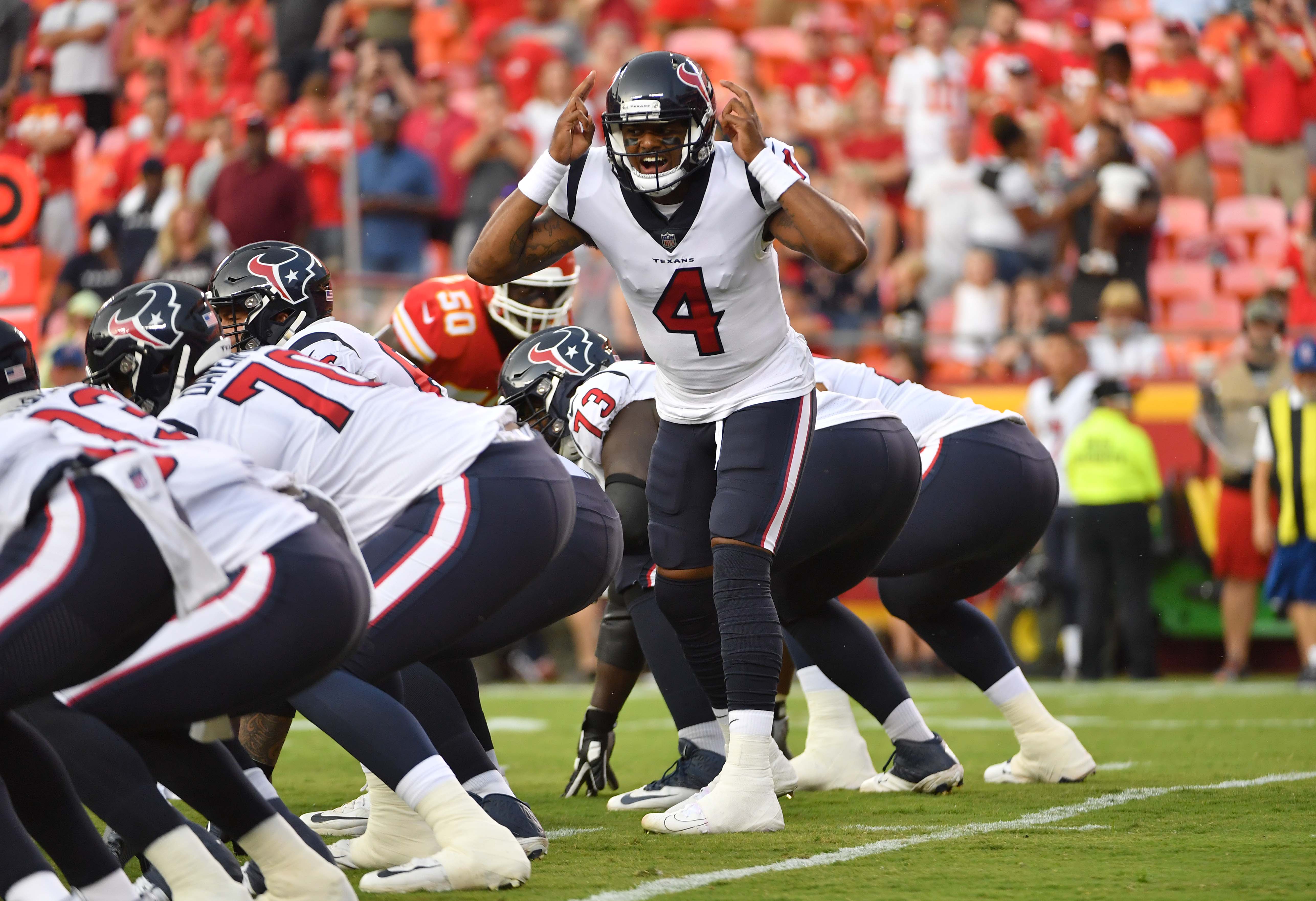 HOUSTON (AP) — Deshaun Watson was back in a game this week for the first time since surgery to repair a right knee injury in November, and although he didn’t play long, he relished his return.

“I just played five snaps, handed the ball off, threw one pass,” Watson said. “So, it wasn’t too bad. Good to just go out there for a couple plays and then watch everyone else perform.”

The Houston Texans quarterback is looking to build on his limited action as the team prepares for two practices with the San Francisco 49ers next week before hosting them in their second preseason game on Saturday.

Watson’s health and development in his second year will be critical as Houston tries to bounce back from a season filled with injuries during which the team went 4-12 for its first losing season since 2013. Though he played in just seven games before tearing his anterior cruciate ligament in practice, Watson gave the Texans optimism that he’ll be the answer to their longtime problems at the position.

He threw for 1,699 yards and 19 touchdowns and ran for 269 yards and two more scores after Houston traded up to select him with the 12th overall pick in the 2017 draft.

Saturday was the team’s first practice back in Houston after the Texans spent the first part of training camp in West Virginia. Although they had to adjust to the hotter temperatures at home, Watson and the Texans got a boost from working out in front of several hundred cheering fans.

“The climate … it’s hot and muggy but at the end of the day we have to come out here and play football and perform and just focus on our task,” he said. “So, it’s always good to have the fans around and show love. They give us energy and high hopes for this season.”

The 22-year-old said he’s grown a lot since arriving in Houston last season and is looking forward to building on what he did last year.

“Just really (grown) as a person as a whole and then just the knowledge of the game,” he said. “Just being able to understand the offense, understand what the defense is doing and just play faster, just go out there and play and not overthink things.”

Coach Bill O’Brien, who worked with Tom Brady when he was an assistant with the Patriots, has enjoyed watching Watson develop and is looking for ways to help him take another step.

“I think there’s areas where he and I need to grow together, like in the red area,” he said. “We’re a little bit behind there but we have to work together on that and see if we can execute better down there, but I think there’s a lot of areas where he’s gotten better and better, and he’ll only get better and better because he works at it and the experience he gets will really help him.”

Watson is working behind a revamped offensive line this year after last year’s group allowed the second-most sacks in the league. So far, he likes the way the unit is coming together.

“Guys just building chemistry, working hard each and every day, never complaining,” Watson said. “They make mistakes, but at the end of the day they correct those mistakes and don’t make it twice, just like everyone else on the offense. Just guys that love to play football. They have a passion about going in … and putting in the work, and (are) passionate about winning.”