foxsports Oct 4, 2013 at 10:40a ET
share url email fbmsngr whatsapp sms
I wanted to start off today’s mailbag by
basically addressing more about what I have written and discussed this week on
the blog and on the radio about the evolution of Tony Romo and Jason Garrett.
If you want a brief recap of what I have been talking about, read the first
section of this week’s Decoding Callahan piece and it
will give you a brief idea of the premise.
It basically goes like
this.  Once upon a time, Tony Romo was a “gunslinger” and a
playmaker which made him a real strength to the Cowboys.  Also, once
upon a time, he had Jason Garrett who seemed intent on figuring out ways to
push Romo’s ability down the field and to attack the defenses on a regular
basis.
But, something changed.  Yes, they still accumulate
the yards and the points, but I have felt that in the second act of their
relationship (since 2010, or so) that the offense has underachieved –
especially felt in games that are not played at home.
It seems that the gunslinging and aggressive
posture of Romo/Garrett has diminished from “attack” to “let’s
not do anything detrimental and try to win this game, 17-14.”  I realize
that is simplistic, but I cannot watch games like Sunday and feel that the
Cowboys are trying to do anything but survive and satisfy their new-found risk
aversion.
Is it the broken collarbone?  Is it Garrett feeling
the added pressure of the head coach spot?  Is it a result of Romo
being blamed nationally for every Cowboys’ shortcoming?  Is the answer
a combination of it all?  And in the end, does the reason really
matter?
They just appear that they enter the game with a posture of conservatism that
focuses on avoiding bad plays rather than looking for good ones.  I
think this has held them back badly, and I believe the infographic below
demonstrates the point. 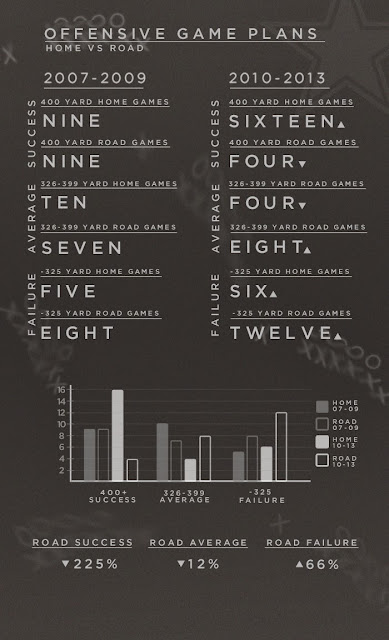 Look at the stretch from 2007-2009
to see the two showing a relatively flat and consistent performance at home and
on the road.  They had issues as a football team back then, but they
had the same personality no matter where they played.  They attacked
the Bears at Soldier Field and the Packers at Lambeau and the Saints in the
Superdome.  They marched into those places and had a swagger and a
posture that said they were leaving with a win.

Now,
look at the home/road splits since Garrett has been named the head coach and
Romo was hurt in 2010.  In only 2 more games, they have actually
bettered their home performances, while only almost never playing well on the
road.

It is tough to identify why they don’t see
this and address it, but I can’t sit on the feeling anymore.  They
simply call a different game when they feel like the stakes are higher on the road.
The game feels different from the opening kickoff and they end up
being a self-fulfilling prophecy;  play for 17, and end up near 17
every time.

The good news is that this Sunday they are
at home and likely have believed all week that they only way to deal with
Denver is to score 35 points.  I expect the Cowboys offense to throw
every trick in the book out there to manufacture offense because they know 17
won’t win.  They will throw deep passes and play with their aggressive
meter maxed.  But, that might only serve to frustrate those who
believe, as I do, that they have 2 different play books, based on the QB and
the HC deciding when they can play carefully or aggressively.

Time for a few emails – this first
one is in reference to the Gates TD play that we studied yesterday in our Xs and Os
post:

Bob, I can’t understand why the bust is on Church
and why Claiborne could be responsible for a zone with two receivers. Don’t you
think the real bust is on Scandrick to leave the slot receiver too soon causing
Church’s
help?

Many thanks for your
replyRoby from Milano

It boils down to this – that I might not have properly
broken down yesterday.  Scandrick (2nd from top) is taking the shallow
man and Claiborne (at the top) the deeper threat.  So, if you look at
that play again, you can see that Scandrick is switching to the outside man and
Claiborne is switching to the slot guy near the end of the play.
Check out the video below and see if you can see that here:

So, the coaching
staff is asking Church to stay high and in the middle and not to drift to help
a guy who they still feel is covered.  Because, if he does go up there
to help, then Rivers and Gates can attack them down the seam which is exactly
what happened.  I agree that it looks like Scandrick released too
easily, but he actually was following the scheme.

Please tell me what is
going on with Bruce Carter and that he is not a bust.  This is not the
guy that we were told was perfect for this defense.  Should I panic?

I share your concern for sure, Bill.  Carter was never sold as
anything short of a solution to the problems on this defense and that while the
safeties and defensive line might have to be worked on, Carter and Lee will be
the strength that we build around.

Now, through 4
weeks, we have seen that Carter and Lee are fine when the opponent runs, but
both are being attacked in coverage – whether in zone or man coverages – and
that is a real issue when this league has proven that passing is increasing and
running is decreasing every year.

The object has
always been to find “3 Down LBs” and those are the players you invest
in (with a high draft pick and a big contract) and linebackers who can only
play situational defense must be signed with caution.

So, it is not uncommon for a team to have special “nickel LBs” who
replace the normal starters as it appears Ernie Sims is doing to Bruce Carter.
But, that leads us to worrying that if this continues, then it is
simple to avoid Bruce Carter if you are the opponent.  Just bring on
“11 Personnel” and then, Carter is on the sideline.  It is
that simple.

Nickel used to mean 3rd Downs and maybe
the 2-minute drill.  But, on Sunday, the Chargers almost ran S11 or
S12 the entire game.  The Cowboys tried to leave Carter on in the 1st
half and then had him chased off by Danny Woodhead in exchange for Ernie Sims
to try.  Now, we can hope that this is a matchup issue that doesn’t
exist more than a time or two a season, but if not, then we have a major
problem.

Denver will be in that same personnel and
Carter might not play much this week.  Green Bay, Philadelphia, New
York, New Orleans, and others will do the exact same thing.  Before
long, you are seeing Carter is not worth a heavy investment if he cannot play
against 3 WR offenses.  I am sure we are jumping the gun here, but
this is a story I am really looking at with a serious amount of concern.

Bob, could you explain to me why the Houston Texans had Trindon
Holliday and didn’t realize what they had?  How could a team allow
Jacoby Jones and Holiday both to walk within a few months of each-other and not
be on top of that?  David in College
Station

I swear, this is one of the great
mysteries, for me.  I cannot believe how electric a return man that Holliday
(with the fantastic nickname, Short Dog) has been for Denver, but remember that
he had multiple kick returns for TDs in Houston in the 2012 preseason alone.
I heard he frustrated the people in Houston with poor judgement on
when to field a punt and when not to – and they had been burned by Jones having
a similar issue with game decisions.  So, they didn’t want another
return man who was anything but safe.  Of course, as we have said, if
you play for safe, that is what you get.   It sure seems like throwing
the baby out with the bathwater to me.

He is an
amazing return man and a 6th round pick in Houston out of LSU.  I
cannot think of a more terrifying return man in the NFL right now and a perfect
set up man for all of Peyton Manning’s drives. I don’t have a good theory here
as to why Houston didn’t keep him around, but after seeing him almost win a
playoff game by himself last season, it gives you just another reason to like
Denver to be in the Super Bowl.

Here is his fine work
for anyone who doesn’t know who the shortest man in the NFL is at
5’5″:

And finally, the skinny on this matchup from a historical
and maniacal perspective, courtesy of Mark Lane – to see 10 times this many, check out his full
column here:

-The Dallas Cowboys have not defeated the Denver Broncos
since 9/10/95 when Dallas beat Denver 31-21 in Texas Stadium.
-It
has been 18 seasons since the Dallas Cowboys have last defeated the Denver
Broncos, which is the current longest drought against an opponent, including
the Ravens, who the Cowboys have never beaten.
-The Denver Broncos
vanquished the Dallas Cowboys in Texas Stadium in 2001 and 2005. The Broncos
are tied with the Bears, Lions, and Chargers for second-most unanswered
victories in Dallas. The Saints lead this category with 4.
-The
Dallas Cowboys are 0-2 against the Broncos in October. However, both of those
encounters occurred in Denver.
-Denver is one of six teams the
Cowboys have faced in the Super Bowl. They are also one of two teams to have a
winning record against the Cowboys in regular season play despite losing to
them in the Super Bowl (6-4). The Miami Dolphins are the other team (7-5).
-The Denver Broncos’ 4-game winning streak against the Dallas Cowboys is
the best in the series. The Cowboys’ largest winning streak against Denver was
three games from 1973-77, one game of which was Super Bowl XII.
-Starting in October, the NFL adorns team uniforms with pink accessories
to raise awareness for breast cancer. Since this campaign started in 2009, the
Dallas Cowboys are 4-11 in the month of October while the Broncos are
7-8.
-The Dallas Cowboys’ first game wherein they wore pink for
breast cancer awareness was a 10-17 loss in Denver in 2009.
-At home
wearing attire to honor breast cancer awareness, the Dallas Cowboys are
2-6.
-In order for Peyton Manning to reclaim the record for most
touchdowns in a single season with 51, he must throw a minimum of 3 touchdowns
for every game to the season’s end.
-The lowest interception total
Peyton Manning has for a season is 9, set in 2006 when he began the year with
an interception.
-Peyton Manning leads the league in fewest
interceptions thrown with zero, tied only with Jake Locker who did so through
3.5 games. Meanwhile, Eli Manning leads the league in interceptions with
9.
-The last time the Dallas Cowboys faced the Denver Broncos, Kyle
Orton, Dallas’ backup, was Denver’s starting quarterback. An instance like this
has never occurred in Cowboys history.
-The first time the Dallas
Cowboys faced John Fox was on 10/13/02 and defeated his Carolina Panthers 14-13
in Texas Stadium.

Enjoy
the game and your weekend.  We will see you back here on Monday.