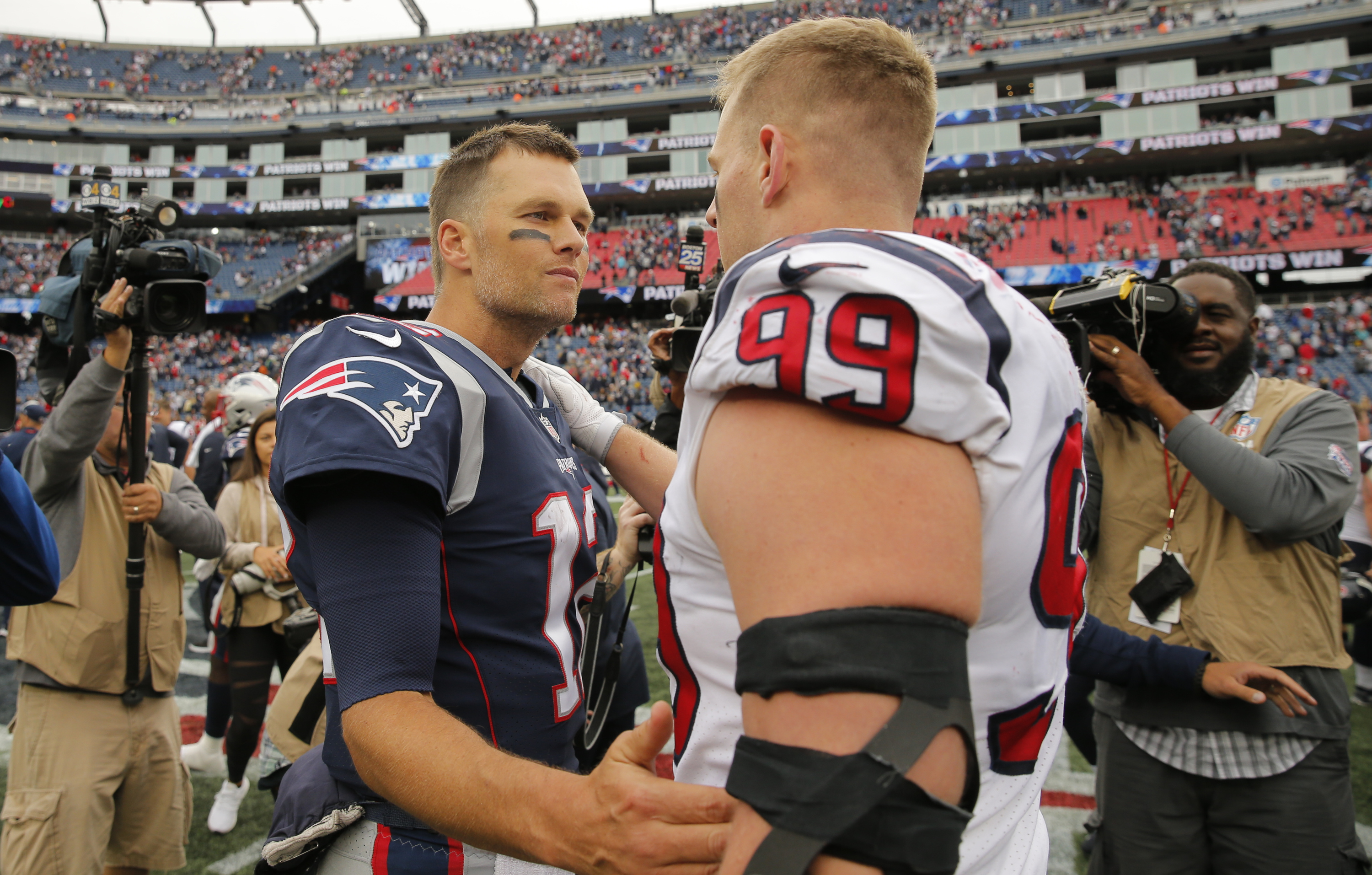 FOXBOROUGH, Mass. (AP) — Tom Brady and Rob Gronkowski sent New England fans into a panic this offseason when they hinted at retiring rather than returning to the Patriots in 2018.

On Sunday, it was the rest of the NFL watching in fear.

Brady threw for 277 yards and three touchdowns, hitting Gronkowski for 123 yards and a score to lead the defending AFC champions to a 27-20 victory over the Houston Texans. The reigning NFL MVP found Gronkowski seven times, including a 21-yard touchdown three plays after Deshaun Watson fumbled a handoff at the Texans 19 on Houston’s first offensive play .

“It’s very important that they came out and played the way they did. They’re our leaders,” said Phillip Dorsett, who had seven catches, including a touchdown. “When they play well, they give an adrenaline boost to the rest of the team.”

Brady, 41, clashed with the team he’s led to five Super Bowl titles in the past year over the treatment of his personal fitness guru and the plans to elevate backup Jimmy Garoppolo to starter. In February, after throwing for 500 yards in a Super Bowl loss to the Philadelphia Eagles, Brady was coy about returning this season.

The Patriots dangled Gronkowski as trade bait this summer before agreeing instead to sweeten his contract with $4.3 million in reachable incentives. Gronkowski reportedly threatened to retire if traded.

Brady also found James White for a touchdown, completing 26 of 39 passes in all; he also had an interception on a pass that was tipped at the line of scrimmage. It was Gronkowski’s 31st career regular-season or playoff game of 100 yards or more, tying Tony Gonzalez’s NFL record.

“We’ve been playing together for a long time,” Brady said. “I know his body language. I know his ability to run and what routes. He can do it. He can do really all the routes. It’s just a matter of giving him a chance, and it came with a big touchdown today.”

Watson, who missed the final nine games last season with a torn right ACL, completed 17 of 35 passes for 176 yards, one score and one interception. He struggled to move the team in the first 40 minutes, managing just a pair of field-goal drives before Alfred Blue ran it in from 1 yard to make it 24-13 in the last two minutes of the third period.

A muffed punt by New England’s Riley McCarron with under five minutes left set up Watson’s 5-yard TD pass to Bruce Ellington and cut the deficit to 27-20. But after getting the ball back at their 1 with 43 seconds left, the Texans failed to reach midfield.

With Julian Edelman serving a four-game suspension, Dorsett caught seven passes for 66 yards, including a 4-yard TD pass in the closing seconds of the first half to make it 21-6. White had four receptions for 38 yards, including a 12-yard score.

Lamar Miller ran 20 times for 98 yards for Houston, which welcomed Watson, defensive lineman J.J. Watt and linebacker Whitney Mercilus back from injuries. Watt had two quarterback hurries, but D.J. Reader had the only two sacks of Brady, both late.

“It’s good to play a full game to know it lasts, to know it holds up,” said Watt, a three-time defensive player of the year. “I didn’t think about it once. So, that’s all you can ask for.”

It was Watson who felt the pressure the rest of the game.

The second-year quarterback, who threw for 301 yards in a 36-33 loss to New England last year in his second NFL start, botched a handoff with Miller in the first quarter, setting up the Patriots up for their first touchdown. In the second quarter, Watson inexplicably chucked the ball into the end zone for a double-covered Vyncint Smith on a second-and-3 from the New England 42.

Stephon Gilmore brought it down for the interception.

The Patriots also had trouble with turnovers.

Brady had an interception in the first quarter on a throw tipped by defensive lineman Angelo Blackson and brought in by Tyrann Mathieu at the Patriots 17. The Texans went backward 7 yards before Ka’imi Fairbairn’s 42-yard field goal made it 7-3.

Gronkowski also fumbled in the third quarter after a 25-yard reception across the middle. Mathieu recovered, but after advancing to the New England 17, the Texans gave the ball back on downs. The muffed punt by McCarron gave the Texans one last chance.

Texans: DE Christian Covington injured his thigh in the first quarter. T Seantrel Henderson left after getting his left ankle rolled a few plays later. Kevin Johnson left with what the team said was a concussion and did not return.

Patriots: RB Jeremy Hill left with a right knee injury on the Gronkowski fumble in the third quarter.

After the Texans forced New England to punt in the final minute, Ryan Allen landed the ball inside the 5-yard line and Jonathan Jones downed it at the 1. Houston advanced to the 16 on a penalty for leading with the helmet and Watson found DeAndre Hopkins for 14 yards before scrambling for 13 more.

From his 43 with 5 seconds left, Watson chucked the ball as far as the 10 but it was knocked away.

Patriots: visit Jacksonville Sunday in a rematch of the Jan. 21 AFC championship game New England won 24-20 to reach the Super Bowl for the third time in four years.