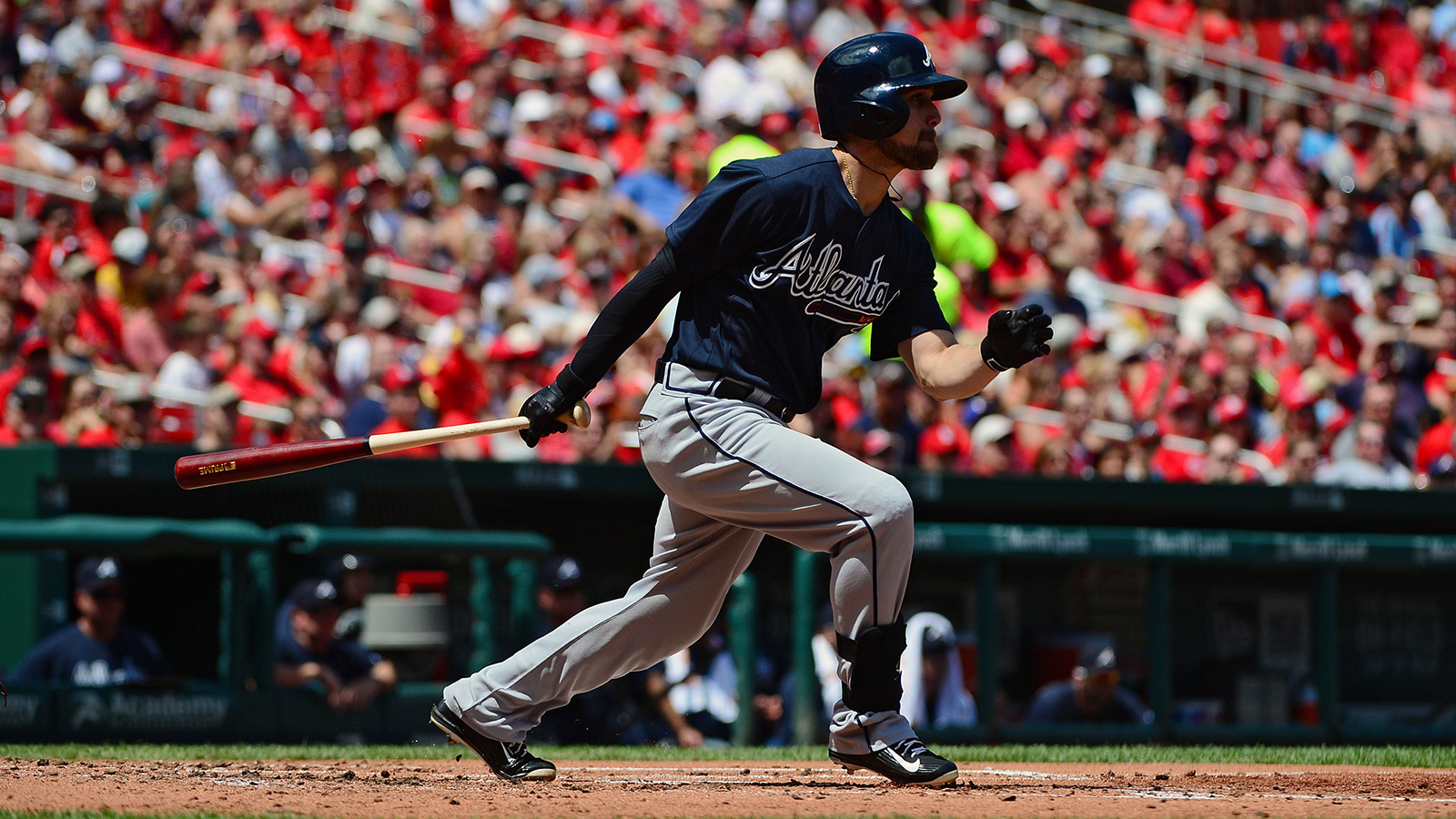 If the Atlanta Braves were still waiting for a second-half boost, they found it in the form of series wins against the Pittsburgh Pirates and St. Louis Cardinals. Not only did Sunday’s 6-3 win against St. Louis secure the rare positive outcome against a top team this season, but it also completed the franchise’s first back-to-back series victories of 2016. Here are three observations from the week:

1. Ender Inciarte has been Atlanta’s best all-around position player for an extended stretch

Ender Inciarte’s inclusion in the Shelby Miller blockbuster still provides a measure of convenient absurdity for Atlanta’s front office. Even for an Arizona Diamondbacks organization that mines outfield talent via the draft and international market better than most — from Justin Upton to A.J. Pollock, Gerardo Parra to David Peralta -— 25-year-old defensive maestros coming off two straight 3-WAR seasons do not simply grow on farm system trees.

In a trade environment where a one-for-one deal featuring former No. 1 pick Dansby Swanson could have plausibly been considered an overpay and the addition of right-hander Aaron Blair was a lopsided bargain, Inciarte, a legitimate threat to win his first Gold Glove this season, topped off a Winter Meetings coup.

This is old news, of course, but it still rings true in what is lining up to be Inciarte’s worst MLB season to date. The Braves center fielder is on pace for his lowest career WAR per game, batting average and slugging with 51 games remaining. His effectiveness against left-handed pitching remains a concern, though not nearly as problematic as it was a year ago, and the odds are not promising that he catches his career-high mark of 29 defensive runs saved.

Despite all of this, he’s arguably been Atlanta’s best all-around position player for two months and counting.

Freddie Freeman remains the team’s most feared bat and, since July kicked into gear, Adonis Garcia has been its most productive offensive force, but Inciarte’s blend of elite defensive prowess and athleticism on the base paths (11 steals) becomes potentially game-changing when he’s hitting even at a league-average rate. He’s been better than that since the All-Star break.

In the 21 second-half games entering Sunday’s finale against the Cardinals — yes, small sample size — Inciarte was one of 18 MLB players worth one or more wins above replacement as he hit .388/.425/.463 with three steals and 17 runs. (Inciarte’s 1 for 5 Sunday performance did not bolster this argument.) It is worth mentioning that Inciarte has suffered from a BABIP in the lower third of all qualified MLB players this season and that has taken a 180-degree turn in recent weeks, but more than anything this seems like his offensive number normalizing. Though his ceiling might be simply hitting above league average, the hitter he was in April and May (51 wRC+ while being sidelined with a hamstring injury) seems more like anomaly.

He’s a vital piece to the puzzle regardless, but especially so when the bat is producing.

The Braves have been through this balancing act before with the likes of Andrelton Simmons and Jason Heyward — perennial Gold Glove threats with inconsistent offensive profiles, though neither Inciarte nor Simmons have ever come close to Heyward’s four straight seasons of 110-plus weighted runs created plus from 2012 to 2015 — but, at a league minimum rate, Inciarte’s value is self-explanatory.

It would be understandable if Sean Newcomb physically felt the weight of expectations.

Entering into a new organization brimming with top pitching talent, Newcomb, the former No. 1 Angels prospect before the Simmons trade, became the standard-bearer for the Braves’ new farm system emphasis. It was impossible to miss his 6-foot-5 frame at Champion Stadium in Orlando, Fla., just as it was difficult to ignore his control issues in spring training action: Six walks and six earned runs in 1 2/3 innings of work will draw the wrong type of attention.

Newcomb’s struggles with command are common among high-ceiling arms. Still, when you are a 22-year-old flagship it sounds alarm bells. In April at Double-A Mississippi, the former first-round pick out of the University of Hartford was walking more than six batters per nine innings. In May, he battled inconsistency from start to start. A strong June (29 Ks, nine walks) gave way to a forgettable July (6.41 ERA).

Newcomb could be turning a corner, though.

He’s allowed one or fewer earned runs in three of his past four starts and, though the walks were up in July, his Thursday gem against Pensacola upped the ante for his stretch run. For just the third time in his minor-league career, Newcomb hit double-digit strikeouts against the Blue Wahoos, fanning 10 with just two walks in 6 2/3 innings pitched. He allowed three hits and one earned run.

Atlanta noticeably boasts options outside of its top pitching prospect.

In terms of lefties, former top-10 pick Max Fried continues to progress at Single-A Rome while working his way back from Tommy John surgery, recent high draft picks Kolby Allard, Joey Wentz and Kyle Muller flash top-of-the-rotation potential, teenager Ricardo Sanchez is hanging around the top-30 rankings and there’s always the possibility Manny Banuelos returns to form following health problems. But the best of those names are not expected to make their MLB debuts any time soon.

So for an organization that could finish a 162-game schedule without a single start from a left-handed pitcher, Newcomb, now 23, represents the clearest hope for 2017 answers.

Putting more Pensacola-type gems together would five him a strong push heading into his second big-league spring training with Atlanta.

Lucas Harrell and Dario Alvarez were midseason pickups for the Braves, while fellow pitcher Hunter Cervenka turned a stint with the Sugar Land Skeeters of the independent Atlantic League into a decent rookie season in Atlanta’s bullpen. Each player was on a league-minimum contract, acquired at zero additional cost. The Braves front office traded the unassuming trio for a 2013 first-round pick (Travis Demeritte), a 2014 third-round pick (Michael Mader) and a 2014 seventh-round pick who signed an over-slot $400,000 bonus (Anfernee Seymour).

Essentially, the Braves applied pressure to the needs of two playoff contenders and flipped three fringe pieces into future value.

Sure, the new trio of prospects — the power-hitting Demeritte, the speedy Seymour and Mader, a left-hander — may never make a dent at the major-league level. That possibility always exists. But trading three veteran castaways for an already loaded farm system’s new Nos. 9 and 19 prospects, according to MLB Pipeline, plus a decent arm that could hold bullpen potential is a core strength of John Hart and John Coppolella’s rebuild. They’ve turned MLB pieces, some very good and some on the fringes, into decent-to-stunning value down the road.

If prospects do not fill the roles left behind by the likes of Harrell or Cervenka or Bud Norris, their services can be replaced by other journeymen pieces walking different paths.

There are valid criticisms to be found for every front office. The Braves are not immune to mistakes. But these two moves are not only easy decisions, they also follow a blueprint the Braves should stick to even when winning records return.