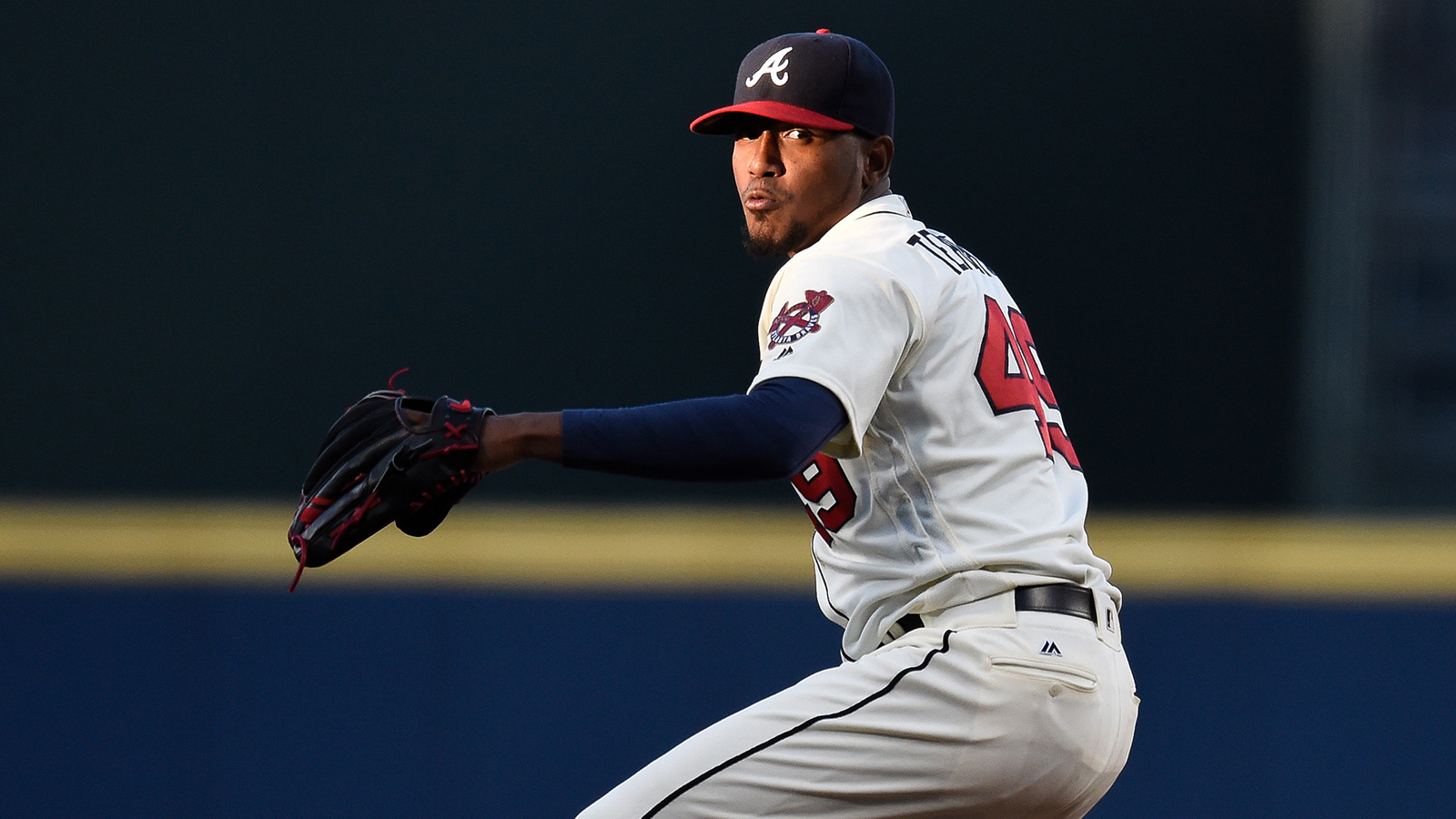 There are two winless MLB teams one week into the season. One resides in Minneapolis, a Twins team opening the season on the road against two playoff hopefuls while waiting on young hitters (Byron Buxton, Miguel Sano, Danny Santana) to right the franchise’s ship. The other calls Atlanta home, a Braves team with a brutal opening schedule for an aging roster waiting on the pitching-heavy prospect cavalry to develop.

It took the Twins four seasons of 70 or fewer wins to add top young talent and reach last season’s 83-win pseudo-breakthrough, but this is relatively new territory in Atlanta, where after 167 games of official rebuilding mode ambitious trades are being deemed foolhardy and not-yet-ready prospects are being called upon to immediately turn the tide.

While there is this creeping inevitability of the Braves competing for nothing more than another top-five draft pick prior to moving to SunTrust Park, it’s likely unfair to assume this is the ultimate product after facing the Nationals and Cardinals — both opponents with their top two pitchers on the mound.

The Braves are 0-5 with significant injuries — standout rookie reliever Daniel Winkler is out indefinitely with a fractured elbow and star defensive outfielder Ender Inciarte is on the 15-day disabled list with a strained hamstring — and underwhelming starts from top players like Julio Teheran and Freddie Freeman. Defensive gaffes have undercut the pitching staff’s so-so production, the offense is shaping up to be a scoring-deficient unit for the third straight season and the bullpen has allowed 20 runs in five games. Reshuffling the organization’s preseason plans for at least three different positions is already on the table.

The outlook is unquestionably bleak.

And yet it’s still April.

The Braves have held late leads in four of their five games — meaning they are a handful of seventh- and eighth-inning miscues away from being 3-2 or 4-1 and creating false expectations like last season’s 5-0 beginnings. The front office’s belief in its roster notwithstanding, this would have been the most unlikely NL East contender this side of Philadelphia regardless of how the first two series panned out. To invent a narrative that this slow start has somehow undermined anything the Braves have built, or re-built, to this point would be shortsighted.

Atlanta’s long-term plan is still intact. It could very well fail. But Erick Aybar, A.J. Pierzynski and any other struggling veteran on a one-year deal will not be the reason.

The Braves could own the worst record in baseball by the time May rolls around. That statement is both a product of their lackluster play to date and what is on the horizon for a roster in need of a confidence boost. The rest of April includes a four-game road set with the Nationals, hosting Clayton Kershaw and the Dodgers, hosting the Mets and their own ridiculous pitching staff, a home-and-home with an improved Red Sox team and a road date with the darling World Series pick, the Chicago Cubs.

Their reward for running that gauntlet? A road series with the Mets starting on May 2.

Starting pitching is the theme of the month for Atlanta. Through their first six series, the Braves are scheduled to face Max Scherzer twice, Stephen Strasburg twice, Clayton Kershaw, Matt Harvey, Adam Wainwright, Gio Gonzalez, Carlos Martinez, Noah Syndergaard and Steven Matz. Among pitchers with at least 100 innings pitched last season, seven of those names ranked in the top-25 in fielding-independent pitching.

The only two who didn’t, Matz and Wainwright, either settled for a 2.27 ERA in his first six MLB appearances (Matz) or returned from injury to post a dominant 2.15 FIP in 28 innings (Wainwright).

Of course, pitching probables are subject to change, but there is no escaping the fact that Atlanta might not be favored in a single series until May arrives.

The byproduct of such a run will make Atlanta’s offense difficult to evaluate early on. On one hand, this is baseball’s lowest-scoring team since the start of the 2014 season, so another 3.4 runs-per-game average offers little shock value. Then again, how accountable should a limited offense be held when it faces Scherzer-Strasburg-Martinez-Wainwright in a six-day stretch? Throw in the left-handed Jaime Garcia — the Braves project to struggle against southpaws all season — Friday’s injury to Inciarte, the team’s primary leadoff hitter, and Freeman hitting just .154/.313/.385 and it’s a minor miracle they managed 17 runs.

The schedule evens out more in May and June, but April continues to look like a minefield.

Looking to put his career-worst season in the rearview mirror, the Braves’ 25-year-old No. 1 starter is off to an even worse start in 2016.

Two-game samples are blips in the grand scheme of a 162-game schedule, but this is not where Julio Teheran wanted to be after facing the Nationals and Cardinals — he owns a 5.40 ERA and 6.45 FIP through his first 10 innings.

As I wrote on Opening Day, this is an important season for the young starter and the Braves, who need to eventually find out just what it is they have locked into a team-friendly deal through the 2020 campaign, but he came out on the wrong end of the spectrum against both Scherzer and Martinez. The command has been an issue, walking seven batters through two starts, and much of that could come from controlling the count with his four-seam fastball — the righty’s bread and butter.

Through 10 innings, Teheran is throwing his four-seamer a career-low 36.8 percent of the time, according to Brooks Baseball, and it’s drawing fewer swings and misses. It’s registering at just 90.1 miles per hour, too, well below his career average of 91.7. This is not necessarily a major red flag: Teheran could be more comfortable mixing in his off-speed pitches and working on hitting his spots rather than simply dialing up the heat, but if that’s the case it makes his walk and home run rates that much more troublesome.

(In lieu of his four-seamer, he’s mixed in more sliders and changeups with varying results.)

At the very least, his fastball is worth keeping an eye on for his next few starts as he tries to get back on track.

The rotation functioned well enough without its No. 1’s assistance — veteran Bud Norris played his role perfectly and 23-year-old Matt Wisler continues to show progress, if not much of his new changeup — but Teheran is clearly a key piece moving forward.

Adonis Garcia, who is one year removed from his rookie season and one day away from his 31st birthday, was one of four Braves players boasting a positive WAR entering Sunday’s series finale against St. Louis, joining Norris, Wisler and Winkler. Setting aside that one of those players is already sidelined for the foreseeable future, that makes Garcia the offensive’s surprising standout for the second straight season.

The third baseman continues to provide power in the middle of manager Fredi Gonzalez’s lineup, hitting .267/.450/.467 through the first five games. His right-handed bat is valuable in the team’s lefty-dominant lineup, and while Hector Olivera could still overtake him as the cleanup spot’s best option later in the season, that time has not yet arrived. Another 110-plus weighted runs created (100 is league average) is nothing to scoff at for this offense.

Garcia is contributing, and it’s getting more and more difficult to ignore.

Without question, the most surprising aspect of this out-of-nowhere production has been Garcia’s plate discipline. He’s matched his 2015 total with five walks (two intentional) already, which, for a player who drew just 57 free passes in more than 1,000 minor-league plate appearances, might be his best Joey Votto impression the baseball world ever sees. On that note, fun fact for fans of small sample sizes:

This is not sustainable. However, it’s a clear indication that Garcia is one of the few productive hitters in Atlanta’s lineup and opposing pitchers are giving him less to hit. Even a decent upgrade in plate discipline this season — say, from walking 2.5 percent of the time to around league average at 7-8 percent — makes him a viable MLB position player, regardless of his defensive liabilities.

The Inciarte injury, and pending call-up of top outfield prospect Mallex Smith, re-sparked the conversation of moving Hector Olivera back to third base at some point this season. Not only does it seem as if that ship sailed when the team played Olivera exclusively in left field during spring training, but, at this rate, this offense simply can not afford taking Garcia’s bat out of the order.

Maybe that changes in the coming weeks and months as pitchers figure him out and the walk rate normalizes, but the franchise needed to find right-handed hitting this season and it looks like they have a better answer at third than anyone gave them credit for.