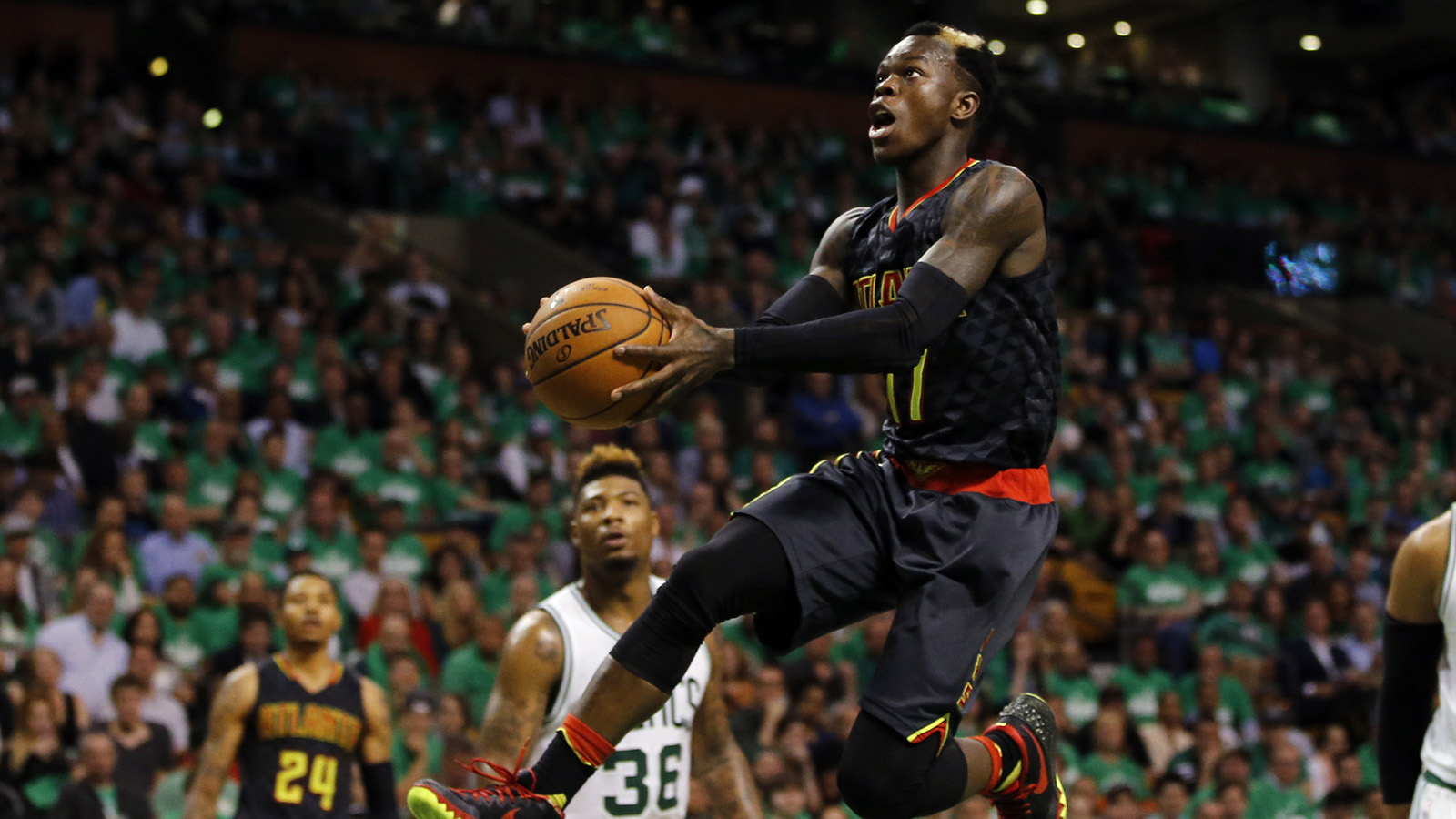 Wes Wilcox walked, arms crossed, through Philips Arena’s home tunnel as time ticked away. The Hawks general manager barked instructions at security staff as he followed his trainers, who in turn flanked his backup point guard, Dennis Schroder. Wilcox was visibly concerned as Schroder walked gingerly to the training room after rolling his left ankle late in Atlanta’s 89-72 Game 2 win over the Boston Celtics.

Schroder’s X-ray came back negative and he played in Game 3 on Friday night — balancing occasional flashes of athletic brilliance with extended stretches of poor decision-making — but the potential injury and inconsistent production from the point guard position in this seven-game series against All-Star Isaiah Thomas and the Boston Celtics once again underscored the fragility of the franchise’s backcourt situation and the difficult decision that waits on the horizon.

As the first-round matchup turns competitive at TD Garden, the question remains: Who is the Hawks’ future at point guard? And does it even matter at the moment?

Atlanta’s early offensive struggles this postseason should not be shouldered exclusively by Atlanta’s floor generals, nor should any panic buttons be hit with a 2-1 series lead and home-court advantage. All-NBA forward Paul Millsap’s shot has abandoned him (38 percent true shooting) in the early going and Al Horford disappeared from the action at times in Game 3. Sharpshooter Kyle Korver regained his shooting form after missing all but one shot in the series opener, but the fact that Mike Scott and Kent Bazemore lead the team in offensive efficiency is a decent indicator of where the Hawks’ top players stand three games in.

The defense remains one of the NBA’s best — this matchup’s collective problems on offense could be labeled as a predictable byproduct of two top-five defensive units clashing — but as Thomas comes off his 42-point explosion it’s worth re-visiting just where Atlanta stands with its own hot-and-cold point guard situation.

The Celtics have found their guy.

Atlanta’s answer is not so simplistic.

The Hawks reportedly explored trade options for starter Jeff Teague (and others) at February’s deadline, which would have turned the keys to a franchise coming off a 60-win season over to an unproven 22-year-old. In the end, the team balked. Teague and Horford, notably, stayed put as the front office set its sights on at least one more deep postseason run with the Hawks’ core four.

The most pressing decision looms this offseason with Horford, a soon-to-be unrestricted free agent, but the backcourt can not be overlooked: Teague is signed through the 2016-17 season and eventually the organization will need to choose a direction. The 2015 All-Star regressed in Year 3 under coach Mike Budenholzer and it’s a safe bet that he’s already reached his prime. Schroder, whose rookie contract will also expire in 2017, was drafted by current management but has yet to prove he can be a starting NBA guard for a contender. He’s more of a wildcard.

Schroder and Teague have alternated between attacking the Celtics’ interior defense and looking lost in a sea of green this series.

"I think we’ve got to mentally smarter, mentally more disciplined," Budenholzer said after the 111-103 Game 3 loss. "You know, it’s good. On the road, everything becomes a little harder and you need to be just more together, more disciplined. I think we’ll do that going forward."

In Atlanta, it was Teague’s show. The 27-year-old pressured Boston defenders relentlessly in Game 1, setting up an effective two-man game with Horford to hold off the Celtics’ run, while slipping into more of a facilitator role in Game 2’s rout. There were moments when it looked like Thomas & Co. had no answer for him.

He averaged 18 points and nine assists with the highest playoff efficiency ratings of his career in those victories.

Game 3 was a different matter, despite Teague’s 23 point-five assist line. The veteran made crucial fourth-quarter mistakes as the Hawks were within striking distance; Atlanta scored just five points on its final 16 possessions.

Thomas slammed the door at Teague’s expense in those closing minutes.

Schroder, on the other hand, stumbled out of the gate in Game 3 — at least until he and Thomas got into a first-quarter altercation sparked by the Celtics’ guard connecting on a punch/slap/forearm shiver to Schroder’s head that did not draw a whistle and, inexplicably, did not result in a video review as three lesser fouls did on the night. (The NBA retroactively assessed Thomas with a Flagrant-1 foul, but no suspension.) The Hawks backup responded in the second and third quarters for his best game of the series, scoring a career playoff-high 20 points to help Atlanta claw out of an early deficit.

"It changed a lot," Schroder said of the Thomas incident. "I was aggressive, tried to attack the basket. I gotta keep doing that, what I did the whole season. … I mean, I’m not going to let anybody slap me in my face. I told him that if we want to play like that, we play like that."

This latest performance was light years ahead of Schroder’s Game 1 dud, in which he was all but unplayable. And that, in turn, was an extension of last postseason when the speedy German product posted a minus-11.2 net rating and effectively shot 41.4 percent from the floor.

Adding credibility to the Hawks’ decision to stand pat at the trade deadline, at least in the short term, was the fact that Schroder’s play fell of down the stretch. After hitting his stride from December through February, his productivity on the defensive end waned in March and led to arguably his worst stretch of games since his age-20 rookie season in April. Over the final six regular-season games, he posted an absurdly low 31 percent true shooting and his turnover rate hit its season high. He looked incapable of handling heavy postseason minutes.

"I think Dennis has just gotta continue to be aggressive," Budenholzer said earlier this series, referencing the offensive hiccups. "Something we’ve seen from a lot of our players is come out with a defensive mindset and have a great impact on the game defensively. Things on the other end will take care of itself. He’s a very confident young man, and we’re confident he’ll play well."

And that has been a game-to-game, or quarter-to-quarter, adventure.