“I’ve never seen a collection of young pitchers like this,” Atlanta’s director of player development said.

The focus is shifting for Atlanta’s farm system. If the process goes according to plan at the major-league level, this year’s top-10 pick — compensation for not signing 2018 No. 8 overall pick Carter Stewart — will be the last premium draft selection and generous bonus pool Atlanta’s front office will have for the foreseeable future. Combine the declining draft resources that accompany major-league success with international sanctions running through 2021 and the loss of last year’s third-round pick and it’s clear the team’s oft-celebrated acquisition phase has given way to phase two: Developing the ample amounts of talent already in the system. The domestic draft will need to be a strength for Alex Anthopoulos & Co. over the next few years, but there’s more than enough raw talent to help replenish the big-league roster well into the early 2020s.

The primary task for Dom Chiti and his staff will be to maximize that potential.

“It starts with communication and relationships with players, but getting a guy to understand what he’s good at and where he needs work it’s all part of whether you call it self-evaluation,” Chiti said. “As they grow and mature they learn who they are and what they are. And usually they get into the most trouble when they get away from that.

“ … The collection of young kids here — their ability is one thing, but their character is on par with their stuff.”

Those developmental strides continue to yield results on annual top-100 prospect lists and beyond in one of baseball’s best farm systems. For the 2019 edition of our fourth-annual Braves prospect composite rankings, the list remains pitching-centric — 12 of the top 17 names make their living on the mound — but position players capable of breakout campaigns demand attention.

First, a quick refresher. FOX Sports South pieces together a composite top-20 ranking for the Braves’ 2019 top prospects to help balance out various projections. Using available prospect lists and projections from eight different sources, players were awarded points for top-20 rankings. (For example, a No. 1 ranking earned a player 20 points, a No. 2 ranking earned him 19 points, No. 3 earned 18 points, etc.) The eight lists are as follows:

Before breaking down any remaining particulars, here’s the 2019 preseason edition of our top-20 Braves prospect composite rankings:

No consensus No. 1 prospect

In the previous three preseason composite releases, the king of the hill was never in question. The 2016 edition released on the heels of the Braves’ blockbuster Shelby Miller trade, a deal which landed former No. 1 pick and top-10 overall prospect Dansby Swanson, and featured the team’s now-starting shortstop as the unanimous top prospect. One year later, Swanson retained his prospect eligibility and entered the campaign as a NL Rookie of the Year favorite, holding onto the franchise’s top spot in consecutive seasons. Then Ronald Acuña Jr. burst onto the scene as Baseball America’s 2017 Minor League Player of the Year and entered the 2018 campaign not only as Atlanta’s runaway top prospect, but also the best minor-league player in baseball.

The 2019 composite provides no such clarity.

Six different players landed in the No. 1 spot on the eight lists used in this composite: Ian Anderson, Mike Soroka, Austin Riley, Cristian Pache, Kyle Wright and Touki Toussaint. Anderson and Soroka were the only two players to earn the distinction on multiple lists.

(Anderson beat out his fellow right-hander by just two total points in the final composite scoring. Strangely enough given Atlanta’s focus on pitching, Anderson is the first young arm to lock down the composite’s top spot.)

The variability underscores the quality depth at the top of the Braves’ farm system. In Acuña’s wake, there are no bona fide top-five prospects with 70-grade future values or better, but virtually every top-100 list features two handfuls of Atlanta minor-leaguers. (For instance, FanGraphs ranks 10 Braves prospects from Nos. 19 to 72.) So while Atlanta is not currently projected to have another player in the class of Acuña, Vladimir Guerrero Jr. or Fernando Tatis Jr. — mainly due to the fact that position prospects typically garner higher grades and the Braves’ farm system is notably pitching-heavy — Alex Anthopoulos & Co. have more hats in the ring than just about any other franchise. 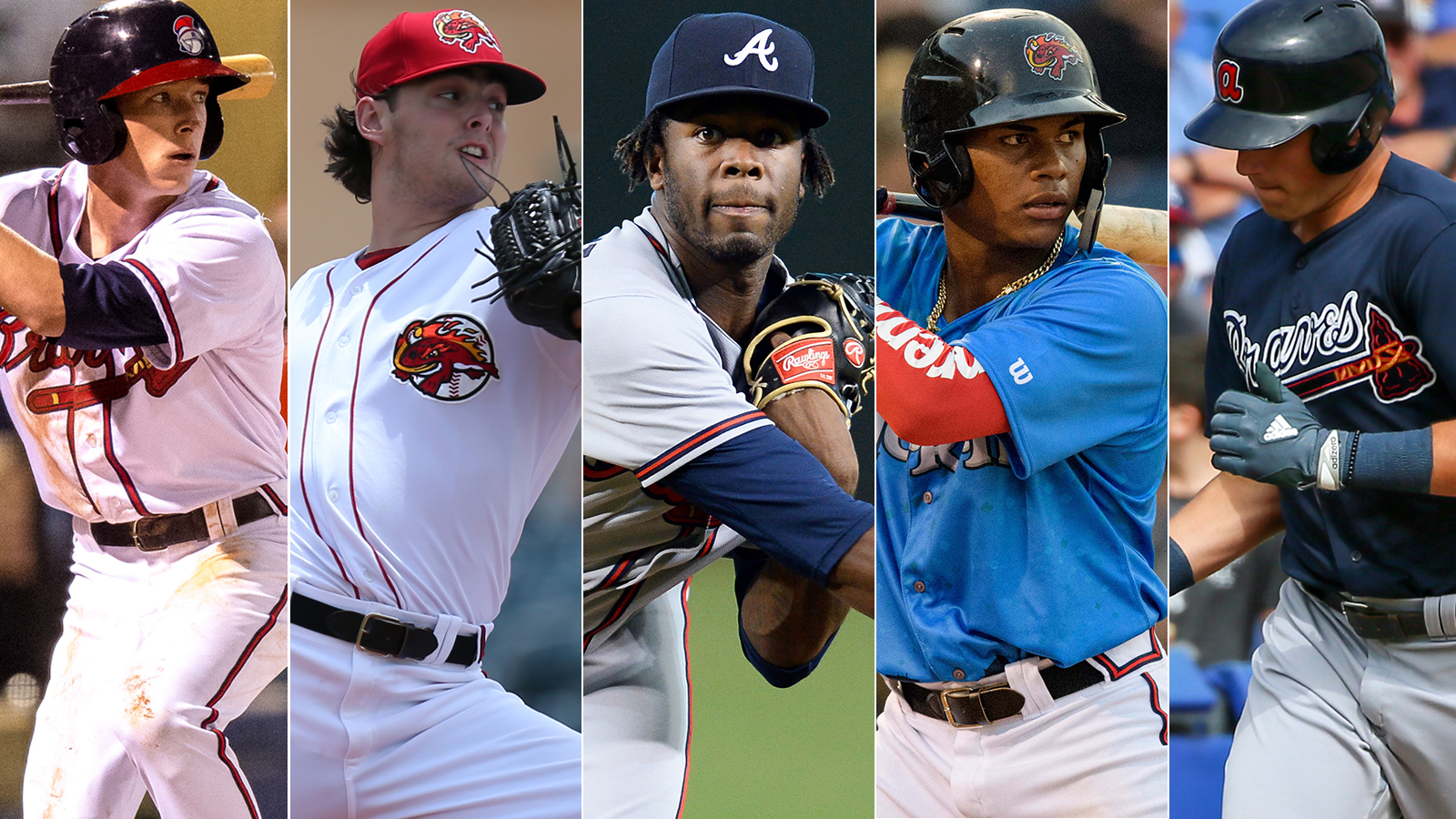 Mike Soroka, Touki Toussaint, Austin Riley and Kolby Allard have now made the Braves’ top-20 prospect list in four consecutive seasons. The first three draft picks and (potentially) the highest-upside trade acquisition of Atlanta’s rebuilding era might not make it five in a row.

After years of commanding consideration as one of baseball’s best farm systems, Atlanta is poised to see a mass transfer of prospects to big-league roster staples this season. Soroka and Toussaint are over the halfway mark to losing their rookie eligibility. Luiz Gohara is one frame shy of the 50-inning rookie threshold. Allard, Kyle Wright and Bryse Wilson have already made their major-league debuts. If Austin Riley does not reach Atlanta in 2019 it would be a genuine surprise. Alex Jackson or Patrick Weigel could be called upon to help the parent club.

Atlanta’s front office has not shied away from aggressively promoting younger players, which shines a spotlight on the likes of Anderson, Kyle Muller and Joey Wentz as well.

“They don’t check your I.D. when you come to the big leagues,” Chiti said. “It’s not like getting in a bar. Nobody’s checking your I.D. The players, the staff at the major-league level, our front office and also us (in player development), it’s about winning games. And if you can help us win a game, then we’re in. We’re not, ‘OK let’s get so-and-so to the big leagues because it’s gonna make him feel good.’ It’s about helping our organization win games.”

Thirty major-league shortstops logged 400 or more plate appearances last season — and Atlanta’s farm system produced one-sixth of that group: Swanson, Andrelton Simmons, Nick Ahmed, Jose Peraza and Elvis Andrus. The Braves have held a reputation as one of the premier middle-infield factories dating back to top-10 prospects Rafael Furcal and Wilson Betemit in the early 2000s (although many of their top names have enjoyed their best seasons in other organizations), but the well is apparently drying up behind Swanson, Johan Camargo and Ozzie Albies.

The player development staff could certainly mold a major-leaguer out of the likes of lesser-known names Ray Patrick-Didder, A.J. Graffanino, Riley Delgado or Derian Cruz — Camargo, already a 4.4 WAR player in his first two seasons at the top level, certainly found his name among that group as recently as 2017 spring camp — but there’s a significant shortage in this high-demand department. Of the 16 farm systems FanGraphs has graded as of this writing, the Braves are the only organization without a single middle infielder drawing a 40-grade future value or better.

Shortstops, in particular, tend to provide future versatility. (The list of MLB legends who started out as shortstops before moving to other positions is extensive and headlined by the likes of Chipper Jones and Miguel Cabrera.) And while the “Best Player Available” mantra understandably owns draft-day headlines, the franchise could focus on adding high-end players to this group in June. The Braves have not spent a premium pick on a middle infielder since taking Matt Lipka, Andrelton Simmons and Nick Ahmed in the 2010 and 2011 drafts.

Atlanta owns three of the top 61 picks and one of the most expensive bonus pools in the 2019 draft.

The Braves have clearly not backed away from their pitching-centric approach to taking the best player on their board — not to mention the likes of prep standouts Witt Jr. and Abrams might already be off the board by the time Atlanta makes the call at No. 9 overall — but they have the ability to make above-slot maneuvers with any of their early selections if the right middle-infield name is within reach.