MLS expansion club Los Angeles FC has been linked with a series of big names ahead of its 2018 unveiling, with everyone from Cristiano Ronaldo to Wayne Rooney to Mexican internationals Javier Hernandez and Andres Guardado to Zlatan Ibrahimovic. Its first big signing, however, could be another veteran star from overseas.

ESPNFC is reporting that LAFC is nearing a two-year deal to make Netherlands star Wesley Sneijder a Designated Player.

Article continues below ...
LAFC sets out to create the MLS 3.0 standard 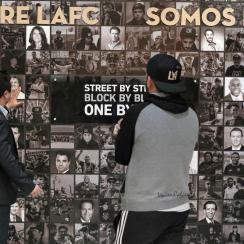 Sneijder was the centerpiece of Inter Milan’s Champions League-winning team in 2010 and helped the Netherlands reach the 2010 World Cup final. Prior to Galatasaray and Inter, Sneijder starred for Real Madrid and Ajax. His 131 caps are the most in the Netherlands’ storied history.

LAFC currently has two players under contract, Carlos Alvarez and Monday Bassey Etim, and both are on loan with USL’s Orange County SC.