Napoli, with a 3-1 deficit to overhaul, led the European champion Real Madrid 1-0 at halftime having been by far the better side, but two headed goals from Sergio Ramos early in the second half turned the game before Alvaro Morata notched a third as Madrid ran out 3-1 winners on the night, 6-2 on aggregate, returning to the quarterfinals.

At the Emirates, a brilliant goal from Theo Walcott put Arsenal ahead, but it never looked like overhauling a 5-1 first-leg defeat. A Robert Lewandowski penalty and a red card for Laurent Koscielny ended any thought of an upset. Further goals from Arjen Robben, Douglas Costa and two from Arturo Vidal made it 5-1 on the night, 10-2 on aggregate, making for an embarrassing exit for the Gunners as cries for Arsene Wenger's job get louder.

Here are three thoughts from the day in the Champions League:

Some players have a quality that goes far beyond their technical qualities. Sergio Ramos may at times be a little clumsy, and he certainly gets too many red cards, but on nights like this he is Real Madrid’s most important player. When Madrid needs a goal, he has again and again been the man to have stepped up: his last seven Champions League goals have all been in the knockout stage.

Backed by a frenzied crowd at the Stadio San Paolo, Napoli had begun at a ferocious pace and clearly rattled Madrid with its pressing. Then, just as the storm seemed to be blowing out, it took a 24th-minute lead. Dries Mertens, happily recovered from his calf strain, ran on to Marek Hamsik’s first-time pass and slammed his finish across Keylor Navas and in at the far post–his 16th goal in his last 15 games.

Madrid should have leveled five minutes later, but Cristiano Ronaldo, having rounded Pepe Reina, skewed his shot against the post with the goal gaping–the seventh time Madrid has hit the woodwork this season, more than any other side. Mertens then hit the post after Alan’s pass was deflected into his path, but at halftime it was 1-0 with Napoli earning its lead, having had 11 shots, more than any other side had managed against Madrid since Zinedine Zidane took over.

But Madrid has scored in each of its last 46 games and it did so again. Ramos headed in from a corner seven minutes into the second half. Five minutes later, the Madrid captain headed in another one and Madrid was through. Alvaro Morata competed the scoring in injury time after Reina had spilled a Ronaldo shot, and the holders continue their quest to match AC Milan of 1989-1990 and repeat as Champions League winners.

For Arsenal, it was the same old story–yet again. This was the seventh season in a row it has gone out in the last 16 of the Champions League. In the four of the previous six seasons, it mounted an impressive, face-saving, comeback in the second leg having lost the first. It threatened to do the same again here before once again collapsing into shambles.

Alexis Sanchez, having been controversially left on the bench for Saturday’s defeat to Liverpool, was back in the side, his name cheered with notable gusto by the home fans. But Wenger did have to do without Danny Welbeck, who felt ill in the warm-up, another piece of misfortune in a season that feels as though it’s spinning out of control. 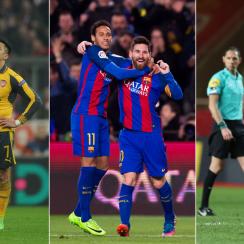 Nevertheless, Arsenal followed the familiar pattern by starting the game well. Sure enough, 5-1 down after its collapse in the second half three weeks ago, Arsenal went ahead after 20 minutes, with Walcott tearing past Xabi Alonso and David Alaba before hammering his finish past Manuel Neuer. Walcott was then denied what appeared to be a clear penalty as Alonso bundled him over, but Bayern’s players are arch-dissemblers and their feigned fury at the forward perhaps persuaded referee Tasos Sidiropoulos not to point to the spot.

The Greek official then did give a penalty to Bayern, sending off Laurent Koscielny–having initially shown him only a yellow card–for barging over Robert Lewandowski. The Polish striker got up to convert the penalty. Arjen Robben then scored a simple goal to make it 2-1 after Arsenal had lost the ball playing it out from the back. As discipline deserted Wenger’s side, Doulas Costa charged from the halfway line to make it 3-1. Arturo Vidal ran on to an Alonso pass to make it 4-1 and then knocked in a Costa cross to make it 5-1. That Arsenal won the tie 2-1 while Koscielny was on the pitch should be of no consolation.

Discontent at the Emirates

Wenger has become increasingly used to protests in recent seasons, but the sense is that they’re becoming more frequent and attracting greater numbers of fans. Not surprisingly, in the first home game since the defeat in Munich, there were demonstrations against his continued management of the club before the game, with a few dozen Arsenal supporters marching on the Emirates carrying a banner on which was written, “NO NEW CONTRACT” and chanting, “Arsene Wenger, we want you to go!” Bayern fans joined the rebellious mood, throwing toilet paper onto the pitch and holding up a banner that read, “WITHOUT FANS FOOTBALL IS NOT WORTH A PENNY.” 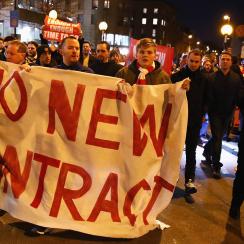 Theirs was presumably a protest about away ticket prices for the game, while for Arsenal fans the grievances are far deeper-rooted: 13 years without a league title and a sense that the club has stagnated over the past decade.

It was indicative of the mood that although the official attendance–based on tickets sold, including season-tickets–was over 59,000, the crowd was actually much smaller than that. Many of those who were there ended the game chanting against Arsenal’s U.S. owner Stan Kroenke.