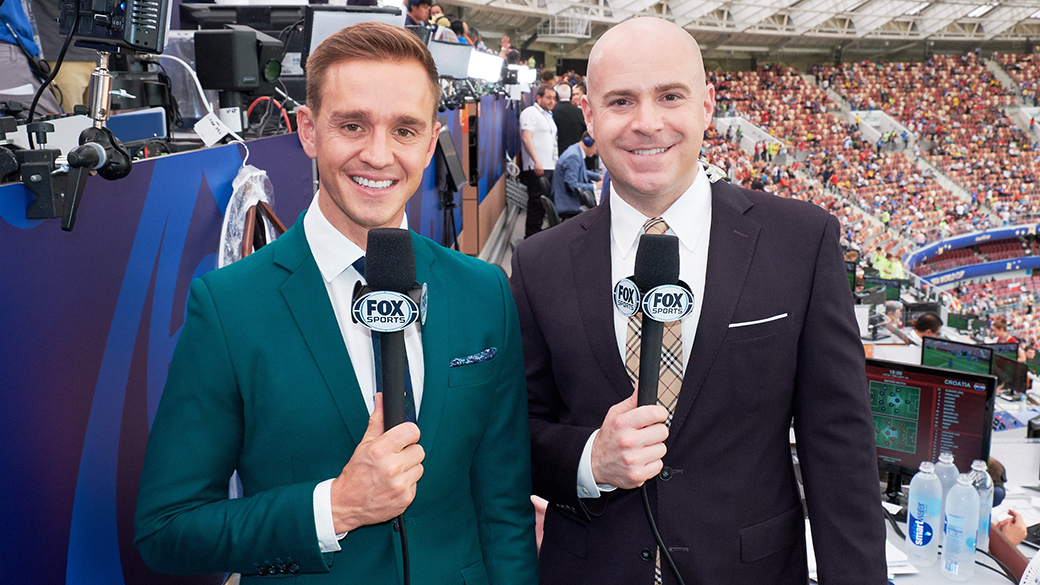 “This has been the best World Cup ever, for the surprises, the drama, the goals. Each and every day, we were gifted stories on and off the field. It was just a wonderful month.”

“This game had it all. It had VAR. It had the mistake by Lloris. Luckily enough, that didn’t cost them the game. You had Mbappe — 19 years old — winning his first World Cup. It was just a fantastic occasion. Well done to France, picking up that trophy.”

“This is an undeniably talented team. They’re just getting better and better. We never saw the finished product, but they didn’t need it, and they went through the tournament. They scored the goals. They had wonderful defense. I thought Umtiti and Varane were wonderful in terms of clearing their lines. [Mbappe] is a star. He’ll be forever etched in the history books — 19 years old, scoring a goal in the final, World Cup winner. No matter what he does in his career, everyone will start the sentences when they talk about Mbappe with ‘World Cup winner in 2018’.”

“I hope we will see more of France in the future, because to be honest, this France team didn’t perform well today. And I hope they step up — several players. For me, it was a bit disappointing.”

“I know Guus wants to see more out of this team, and they are a work in progress. That’s what [France manager] Didier Deschamps would tell you. But man, if you can be a work in progress to win the World Cup, that’s not bad. I happened to like the way that they played. The ability to counter attack, with the speed, pace and recognition to do that was consistent through the tournament. Today, even when the pressure came, and they weren’t able to get out on that break, they still found ways to score goals in the final.”

Holden on what set France apart this tournament:

“They showed a maturity beyond their age for the team that’s the second youngest age in the tournament. And the manager, Didier Deschamps, to bounce back after losing in a final two years ago on home soil. They’ve been tough to beat. They’re good defensively, sound tactically, and they have difference makers with Mbappe, Pogba, Griezmann and Olivier Giroud. They’ve all played their part. They are worthy champions.”

Smith on Paul Pogba having a breakthrough World Cup tournament and final:

“This will probably be the making of Paul Pogba. He’s had a lot of criticisms back in England, playing for Manchester United: he doesn’t defend, he gets caught out of position, he doesn’t score enough goals.

“And in this game, he got himself a goal. He controlled the midfield, especially in the second half. He certainly delivered today. He took control of the game in the second half when it opened up and allowed himself to get a goal.”

Lalas believed Pogba redefined himself with this World Cup:

“If you’re not a Croatian fan, today you probably felt genuinely happy for Paul Pogba for putting the ball in. It comes from the fact that you can get defined by a World Cup and you can also be redefined. The way that he played, and the way that we view him, is so different from the way that he was playing at Manchester United. It’s wonderful, this transformation, this maturity, this leadership, and the sacrifice he made to do the work that needs to be done, even when he’s not scoring goals, even when he’s not getting a lot of attention. It was a wonderful tournament for him.”

Smith says Croatia was the better team, despite the loss:

“They had the majority of possessions, especially the way they started the game. The first 20 minutes, they were all over France. They just couldn’t convert any chances. The second half they looked a bit leggy in the last 20 minutes. They were putting crosses in by Rebic and Perisic, to Mandzukic, but he wasn’t getting on the end of them. For me, they played the better football. But France, going forward, you’ve got the threat of Mbappe. I thought Giroud was outstanding. He didn’t get a goal, but his hold-up play was good. And Griezmann lifted up his game. I felt Croatia had the better game, but obviously, come away losers.”

“They should be really proud. They played a great final. They gave everything. A bit of luck, you need, and the luck was there for France today — the own goal, the handball, the penalty kick. All very crucial moments where Croatia was dominating and creating. But then again, you have to score the goals and France did that, and have done it through the whole tournament.”

Lalas gives his final grade on VAR for the tournament:

“I give it an A- because you can always improve some things. But I think it went off without a hitch, for the most part. We’re always going to have agreements and disagreements, but ultimately these are human beings making subjective decisions.

“I think it made the game better, it modified behavior of players, it was efficient, it was fast, and it was good.”