Saturdays Start Stronger Than Ever With FOX College Football

The 2021 FOX Sports college football lineup is headlined by some of the sport’s most-anticipated non-conference matchups and rivalry showdowns. Highlighting the September slate, Oregon heads to Columbus for a Week 2 tilt with Ohio State on Saturday, Sept. 11, at 12:00 PM ET following BIG NOON KICKOFF live from The Horseshoe. Oregon-Ohio State opens a full weekend of key programming on FOX, which also includes MLB’s Yankees at Mets in prime time that evening and a FOX NFL doubleheader the following day.

The newest face on the FOX College Football desk, Stoops returns to Norman with the cast of BIG NOON KICKOFF in Week 3 as the Sooners play host to former Big 12 rival Nebraska on Saturday, Sept. 18. Closing out the first full month of the season, Notre Dame and Wisconsin face off for the first time in more than 50 years, meeting at Chicago’s Soldier Field on Saturday, Sept. 25, with BIG NOON KICKOFF live from the shores of Lake Michigan.

“Everyone at FOX Sports is beyond excited to get back to campus for the 2021 college football season,” said Mark Silverman, FOX Sports President, National Networks. “We’re thrilled to expand BIG NOON KICKOFF’s on-site presence with more stops at more locations this season. Working with our newest sponsor Dos Equis, as well as longtime partners Wendy’s and Allstate, we have a tremendous opportunity to celebrate more student-athletes, coaches and programs in what is sure to be the Year of the Fan.” 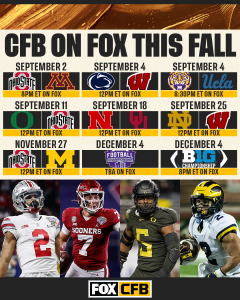 The 2021 FOX College Football schedule is book-ended with some of the biggest Big Ten games of the year, kicking off Thursday, Sept. 2, with Ohio State at Minnesota at 8:00 PM ET on FOX, followed two days later by Penn State at Wisconsin on Saturday, Sept. 4, at 12:00 PM ET. The cast of BIG NOON KICKOFF hits the road for on-site shows in both Minneapolis and Madison. The regular season concludes Thanksgiving weekend with the most heated rivalry in all of sports as Michigan hosts Ohio State Saturday, Nov. 27, at 12:00 PM ET on FOX.

Additional highlights this season include:

• Steve Sarkisian makes his Texas debut as the Longhorns face Louisiana, a top-25 squad last season, on Saturday, Sept. 4, at 4:30 PM ET, followed by Ed Orgeron’s return to Los Angeles as LSU faces UCLA at 8:30 PM ET, both on FOX.

• Stanford heads south to take on Pac-12 and in-state rival USC on Saturday, Sept. 11, at 10:30 PM ET – the first Pac-12 After Dark contest on the FOX broadcast network – to cap off a full day of sports programming.

College football on FOX and FS1 is simulcast on the new FOX Sports app, which provides live streaming video of FOX Sports content through iOS and Android devices.

FOX Sports’ confirmed 2021 fall college football schedule is available here. The remainder of the schedule will be announced as the season progresses.

Saturdays Start Stronger Than Ever With FOX College Football (119 kB, last updated May 2021)