This morning, FOX Sports announced BIG NOON KICKOFF will be live from Ohio Stadium for the Big Ten opening weekend matchup between Nebraska and Ohio State on Saturday, Oct. 24, in the BIG NOON SATURDAY game of the week. 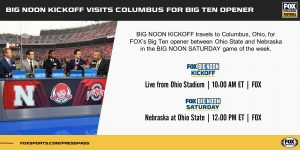 Urban Meyer breaks down the best ways to game plan around a shorter quarterback like Oklahoma’s Spencer Rattler in today’s edition of Urban’s Playbook:

“Spencer is 6’1’’ – he’s not 6’5’’ so you have to game plan differently when you have a shorter quarterback. I’ve had two shorter quarterbacks. One was Chris Leak at Florida – he won a national title; the other was J.T. Barrett – he was the Big Ten passing leader.”

"Here's the reality, Spencer is 6' 1"… so you have to game plan differently when you have a shorter QB."@CoachUrbanMeyer gets some help from @MattLeinartQB and @Brady_Quinn to show how play calling is different for undersized QBs in today's edition of Urban's Playbook 📝 pic.twitter.com/cOvc6xtBZZ

Former Texas linebacker Emmanuel Acho talks about the experience of playing in the Red River Showdown:

“This is my first time back in nine years since I played in the game, and I got the same goosebumps, the same chills that I got nine years ago.”

“You walk into the stadium, and there is nothing like it, because you realize that you circled this game on your calendar as soon as the schedule came out. The atmosphere is going to be a little different, but it’s still going to be tense.”

"I got the same goosebumps and chills that I got 9 years ago."@EmmanuelAcho joins us from the Cotton Bowl ahead of the Red River Showdown! #BigNoonKickoff pic.twitter.com/TDlEtUacDB

Matt Leinart says undefeated Big 12 and Pac-12 champions should be in the College Football Playoff conversation:

“I believe an undefeated Big 12 champ is in the College Football Playoff. Look at Oklahoma State – they’re winning without Spencer Sanders, their star quarterback. We saw Chuba Hubbard, Tylan Wallace last week – the explosive offensive weapons they have and a defense that’s only given up nine points per game. So, keep an eye on Oklahoma State. They’re still very much alive.”

“An undefeated Pac-12 champ is certainly in the conversation at the end of the season within the Playoff Committee’s eyes.”

“It’s always a street fight for that fourth position in the College Football Playoff. I know that’s down the road, but for the last three years, the Big 12 had a slot – it was Oklahoma. Now the Big 12, in my opinion, is done. So, who does that open the doors for? A one-loss Notre Dame, because they have to play Clemson; or a one-loss Penn State, because they have to play Ohio State. Those are two excellent football teams. If I’m the coach of those teams, I’m thinking we’ve got a shot now because that spot is going to be open.”

“Or, a two-loss SEC school. You have a team like an Alabama, Georgia, Florida – one team’s going to win it, but another team’s going to have two losses. That’s probably going to be the second-best team, or the team that’s going to get into the Playoff.”

Brady Quinn says it will be difficult for the Big 12 to overcome a slow start:

“First impressions are everything. I think that’s the hard thing for the Big 12 – they decided to play early, and they’ve gotten off to a bad start. Unfortunately, I think that’s going to sit in the minds of the College Football Playoff Committee when they have to make that decision in December.”

Meyer says Florida tight end Kyle Pitts has been the most impressive player so far this season:

“Kyle Pitts to me is the most impressive player in 2020 – Justin Fields hasn’t played yet; Trevor Lawrence hasn’t been challenged yet.”

“The Kyle Trask to Kyle Pitts connection is something we have not seen in a very long time. This tight end is so dominant, and one of the reasons why I like him is because you can line him up almost anywhere.”

“I think the scariest part is that he’s still learning, so he’s still going to get better. We have just not seen a tight end this dominant in a long time.”