"To play under the brightest lights on the biggest stage" @USC_FB's Clay Helton and @ASUFootball's Herm Edwards join #BigNoonKickoff to discuss their Week 1 @pac12 game on FOX 🤩 pic.twitter.com/hHmtVO2zOC

“We’re grateful to our partners at the Pac-12, USC and Arizona State for allowing us to showcase this matchup in our BIG NOON SATURDAY window,” said Brad Zager, FOX Sports Executive Producer, Executive Vice President/Head of Production & Operations. “It’s already been a football season unlike any of us have ever seen, and we’re looking forward to highlighting this conference and these two programs in a way that’s never been done before.” 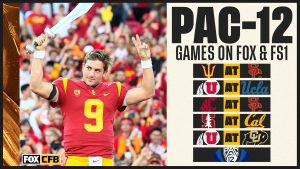 FOX Sports’ 2020 fall college football lineup continues next week with the historic Red River Showdown between Oklahoma and Texas from Cotton Bowl Stadium in Dallas on Saturday, Oct. 10, at 12:00 PM ET. Last year’s Red River Showdown on FOX pulled in 7,313,000 viewers – the network’s most-watched Big 12 game ever and the rivalry’s best performance in a decade.

College football on FOX and FS1 is simulcast on the new FOX Sports app, which provides live streaming video of FOX Sports content through iOS and Android devices.

FOX Sports’ confirmed 2020 fall college football schedule is available here. The remainder of the schedule will be announced as the season progresses.