BIG NOON KICKOFF unveiled the entire Big Ten schedule during Saturday’s show. Highlights and reaction can be found below. 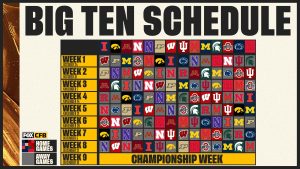 Highlights on FOX include the Week 1 showdown between Nebraska and Ohio State, Michigan at Ohio State to close out the regular season, and the Big Ten Championship. 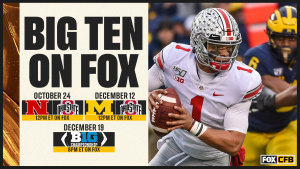 Urban Meyer reacts to the Big Ten schedule:
“Some teams were dealt serious body blows. When you look at the East and West contenders, it’s very clear who has the easier schedule, the easier run. Ohio State has two speedbumps, that’s it. They could be two-to-three touchdown favorites in every game except for Penn State and the Wolverines.”

Reggie Bush reacts to the conference’s nine-week schedule:
“Here’s the thing about this conference – they have to play nine games in nine weeks. And they play defense in the Big Ten, so you’re going to get a lot of those guys in the training room.”

The BIG NOON KICKOFF crew discusses who can challenge Ohio State for the Big Ten title:

Meyer on Ohio State’s offense:
“The word in Columbus is, offensively, they could be one of the greatest of all time.”

Leinart on Penn State as a challenger:
“I love [Penn State quarterback] Sean Clifford. I’m excited to see his development this year. He can beat you running the football, and that’s what you need against a really good and fast Ohio State defense.”

Meyer on Michigan quarterback Joe Milton:
“That is a Cam Newton lookalike. He’s got a hose and he can run.”

Bruce Feldman reports on how the College Football Playoff selection committee will consider the Big Ten:
“I talked to a CFP selection member, and his rationale on this was, ‘Our job is to rank the best teams, period.’ To me, that sounds a lot like that old term the eye test, which, I think that’s encouraging if you’re a Big Ten school.”

Leinart expects the best four teams to make the Playoff:
“The four best teams are going to make it. If Ohio State plays seven games and the SEC plays 10 games, but Ohio State looks like the best team, then they deserve a shot.”

Ohio State head coach Ryan Day reacts to the Big Ten’s decision to start play in the fall and previews the Buckeyes this season.

"I'm so happy for these kids"@ryandaytime joins #BigNoonKickoff to discuss the fight to bring back Big Ten football and how @justnfields never wavered in his commitment to @OhioStateFB 💪 pic.twitter.com/hjKTFopFOv

Penn State head coach James Franklin checks in with what to expect from the Nittany Lions this season:

"If you want to make the playoffs and guarantee it, you need to go undefeated." @coachjfranklin joins #BigNoonKickoff to talk all things @PennStateFball 🦁 pic.twitter.com/OkjBLRIPlY