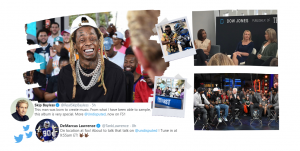 FIRST THINGS FIRST
Hall of Fame wide receiver Terrell Owens talks about what it was like playing for Andy Reid:

"Andy Reid made me feel like a super human when I was out there playing football. … Genius, offensive genius." — @terrellowens pic.twitter.com/cpCXc3xJYI

SKIP AND SHANNON: UNDISPUTED
Lil Wayne on what Kobe meant to fans both on and off the court:

.@RealSkipBayless: Kobe became the greatest ambassador this league has ever had. We watched him grow up, and he became a mentor to players in every sport.@LilTunechi: He became a mentor for people in life as well off the court. That man was a real teacher for real. pic.twitter.com/9pbQWy23dR

"I've never seen anything like it in my life. The greatest comeback in franchise history."

Carson Palmer on what advice he'd give to Joe Burrow

"I think he's light years ahead. He's extremely mentally tough and I think his dad is just going to sit back and say you know what, I'm going to trust the kid I raised and let him make his decision." pic.twitter.com/TmpDypYhoU

LOCK IT IN
WBC World Heavyweight Champion Deontay Wilder faces off against Cleatus:

.@rachelbonnetta: If you think Tyson Fury is a tough challenger, you've never seen a fighter like this… Bring up FOX's #1 contender!@bronzebomber: Who is this? RoboCop? 🤣 pic.twitter.com/j5r07jEFYo