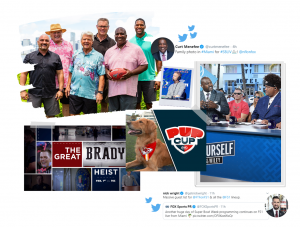 "When I got close, my teammates were like, 'You're just 20 yards away.' We were on that last drive when I got it, I came to the sideline & coach was like, 'You got one more play, you're coming out.' The next play I went for 53." pic.twitter.com/4n3cBoYBCO

.@VonMiller is taking Nick Bosa and the 49ers D-line in the Super Bowl:

"Nick Bosa is going to bring the power." pic.twitter.com/bbDjUGn9Ho

"The city loves this kid, he is great for football. He's a competitor and wants to be perfect all of the time."

Shannon Sharpe talks about his relationship with Carolina Panthers running back Christian McCaffrey:

"I've known him all of his life, I played with his dad Ed McCaffrey and his mom, Lisa, used to bring him to training camp every summer. To see what he's grown up into, I'm so happy and proud of him."@ShannonSharpe on his relationship with @CMC_22 pic.twitter.com/sZzTYOhKNE

THE HERD WITH COLIN COWHERD
After announcing that he and his wife Ciara are expecting their next child, Seattle Seahawks quarterback Russell Wilson talks about balancing football and family:

"The fun about family is, that's the part that's going to last… It's forever." @DangeRussWilson joins us from Miami and talks balancing football and family life: pic.twitter.com/XcZm2WIJkh

SPEAK FOR YOURSELF
Marcellus Wiley believes Andy Reid must win a Super Bowl to cement his legacy:

.@MarcellusWiley agrees with @WhitlockJason that Andy Reid must win a Super Bowl to cement his legacy

"Greatness isn’t defined without a signature moment & let’s think about Reid as a coach… What's his signature moment? Is it Philly, coming up short time and time again?" pic.twitter.com/EjjXZDoi0n

LOCK IT IN
According to Cousin Sal, the team wearing white jerseys in the Super Bowl are 13-2:

The team wearing white jerseys in the Super Bowl are 13-2.

"The 49ers are wearing white on Sunday… Sorry Andy Reid, it comes down to a cup full of bleach, that's all that matters in this game." — @TheCousinSal pic.twitter.com/pH0eoCJNpm

Jamie McMurray and Larry McReynolds share what John Andretti meant to them: