This week, FOX SPORTS U students from the University of Florida participated in on-the-ground sustainability efforts through the Ocean Conservancy’s Virginia Key Beach cleanup and had the opportunity to attend a meet-and-greet with FOX NFL reporter and former Gator KRISTINA PINK.

Amidst the Super Bowl buzz in Miami, FOX NFL reporter PAM OLIVER was honored at THE SPORTS POWER BRUNCH with the Excellence in Media Award. 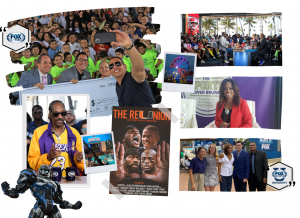 FIRST THINGS FIRST
Nick Wright believes Patrick Mahomes will be a Hall of Famer with a win on Sunday:

"If the Chiefs win Sunday, Patrick Mahomes will be a Hall of Famer." — @getnickwright pic.twitter.com/PlU8lJfI5R

"My dad is a superhero to me. Not just a football player. He's so humble, and it's so cool to be able to call him 'Dad.'"

— @Ky1eLong on Howie Long and how great the film 'Broken Arrow' is pic.twitter.com/9WV9u3JsFy

SKIP AND SHANNON: UNDISPUTED
Cleveland Browns wide receiver Jarvis Landry sheds light on what it was like to play under Freddie Kitchens:

"Running a team is a lot more than being personal with and coaching one guy. Not that Freddie Kitchens was in over his head, but we just couldn't find a way to get on the same page and figure out what our identity was." — @God_Son80 pic.twitter.com/yebEoVyn8e

"When he first got to LA he was a kid. I was a kid at the same time, so it was beautiful watching his story and watching him become a legend, father, mentor and a real leader. It crushed my heart because I knew he wasn't done."@SnoopDogg reflects on the legacy of Kobe Bryant pic.twitter.com/4PGPrQnpjo

SPEAK FOR YOURSELF
Pro Football Hall of Famer Rod Woodson believes too many players are getting into the Hall of Fame:

.@RodWoodson26 agrees with Deion Sanders’ take that too many players are getting into the Hall of Fame.

"When you say their name, it shouldn't be a pause. If you have to have that 'hmm', he's not a Hall of Famer. … It’s supposed to be the elite of the elite." pic.twitter.com/HielbqZHD0

LOCK IT IN
Clay Travis explains why he doesn’t think Jimmy Garoppolo has what it takes to beat Kansas City:

"You can't have an offense that's predicated on a QB not throwing for 100 yards 3 straight times to win the Super Bowl. It hasn't happened since the 1970s." — @ClayTravis pic.twitter.com/2f05jaI3g6

NASCAR RACE HUB:
NASCAR and the NFL have more in common than you think:

NASCAR and the NFL have more in common than you think.#RaceHub | #SB54 pic.twitter.com/s4LONvnF5C