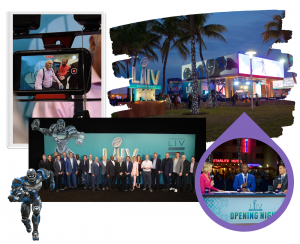 Nick Wright predicts the Kansas City Chiefs will come out victorious on Sunday:

"The 49ers are an unbelievable team. They were the best team in the NFC all year. They were 3 plays away from being undefeated. They have a terrifying front 7. … Despite all of that, I think the Chiefs win. The one thing the 49ers don't have is Patrick Mahomes." —@getnickwright pic.twitter.com/zEnyKa0tuZ

.@DeionSanders and @michaelirvin88 reenact a pass interference call in their battle during the 1994 NFC Championship game 🤣🤣🤣 pic.twitter.com/Rh1YUx0EKB

THE HERD WITH COLIN COWHERD

FOX NFL lead broadcaster Joe Buck talks about the friendship he had with his father, Jack Buck:

"We were best friends instead of Father-Son. I took all that in… I was so lucky."

Joe @Buck joins us from Miami and talks about his relationship with his father: pic.twitter.com/lQ4OvrwZwe

An NFL father himself, FOX NFL SUNDAY analyst Howie Long has seen his children succeed on the field, so he knows what it feels like for @49ers coaches Kyle and Mike Shanahan. pic.twitter.com/h6L1oZiD9A

Jason Whitlock believes the Kansas City Chiefs are primed for a fall:

Today’s #Whitlogue: Like all great rock bands, I fear the Chiefs are primed for a fall. @WhitlockJason pic.twitter.com/k1nKuCf3fM

Todd Fuhrman believes the 49ers are set up for long term success:

"Kyle Shanahan knows how to build his offense, Jimmy G is going to be the captain of his ship and the 49ers are going to be a force for years to come." — @ToddFuhrman pic.twitter.com/JjESPvCehL